Museum from the Arrival Plaza

If you put a fine, thorough-bred Arab stallion and a cutesy, shaggy donkey together in the same pasture you can appreciate their respective characters and charms, but they are bound to be compared to the detriment of one or the other. The same could be said for the two garden areas at the Getty Center, one built under the direction of Richard Meier, the other by Robert Irwin. 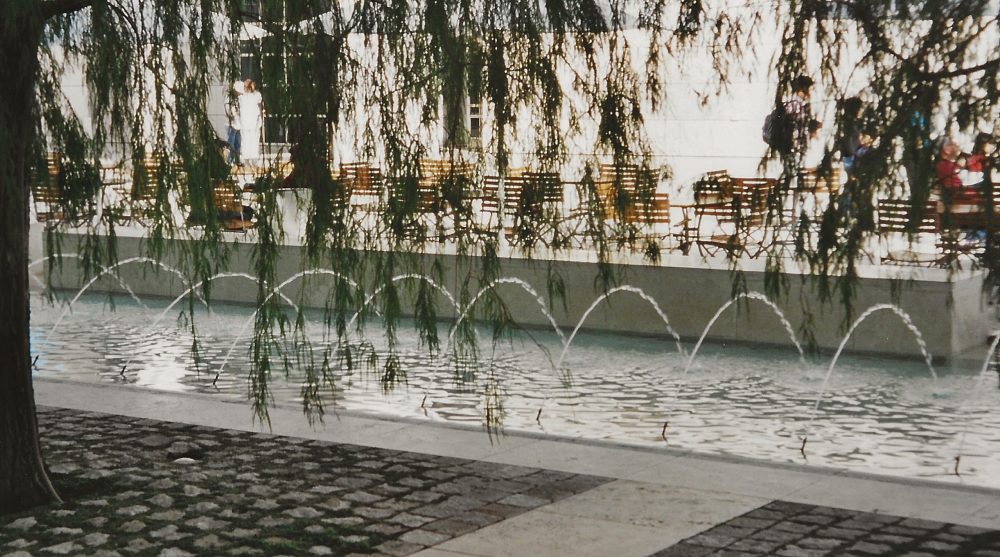 It all started so well. The J Paul Getty Trust, one of the world’s wealthiest art institutions, set up by the oil magnate J Paul Getty in 1953, appointed the architect Richard Meier to develop a master plan for their spectacularly large wooded site with a dividing canyon set on a steep rise in the Santa Monica mountains. The site has wonderful panoramic views of the Los Angeles skyline, mountains and the Pacific Ocean. 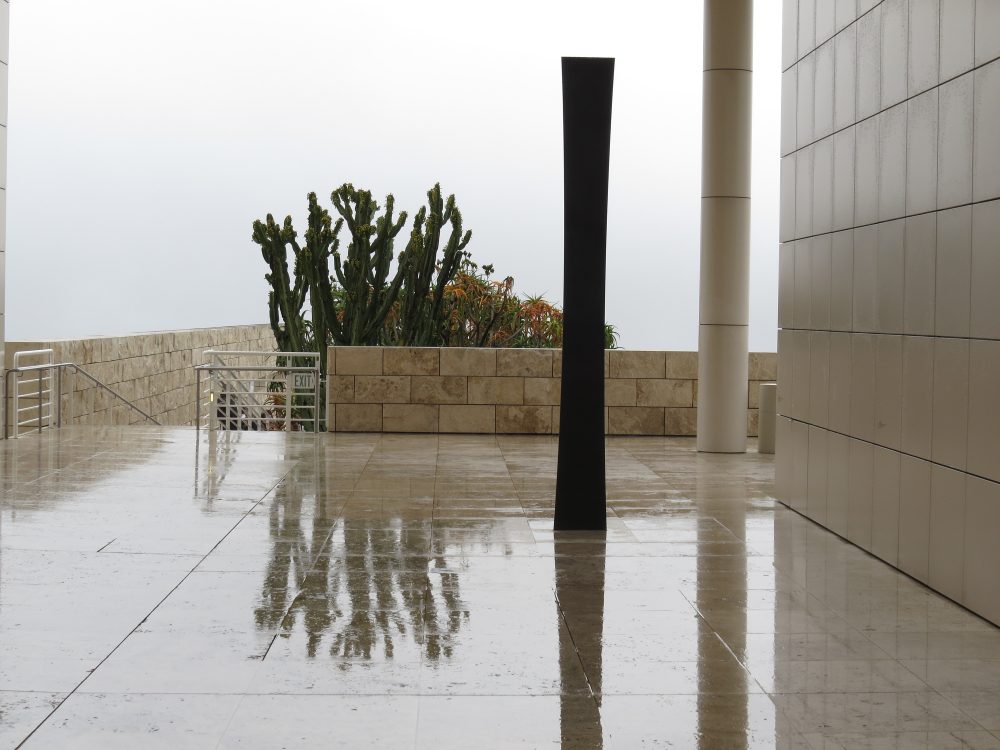 The brief was for a series of buildings to house the different departments of the Trust – the J Paul Getty Museum, the Getty Foundation offices, Getty Research Institute, Exhibitions Pavilion and Getty Conservation Institute all set in an extensive garden landscape. Meier conceived it as a series of buildings arranged on a sun-drenched Southern Californian acropolis; the most important of which was the J Paul Getty Museum, divided into four pavilions, which houses amongst other things a stupendous collection of Impressionist paintings. 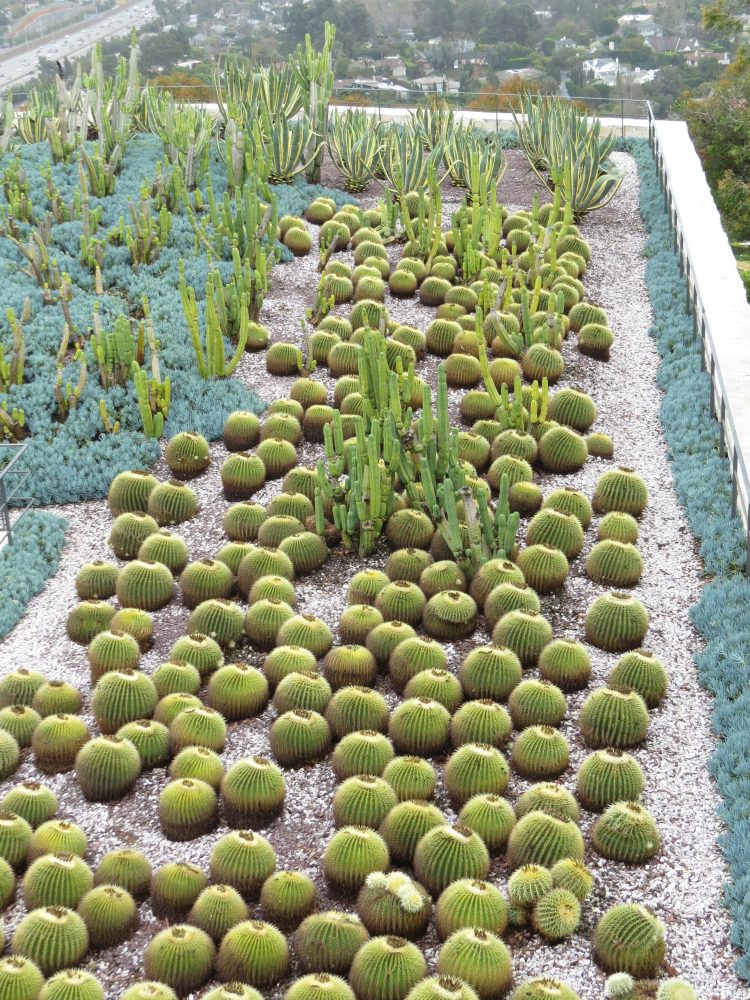 Meier took on board a team of top American landscape architects, including the great Dan Kiley, and the courtyards, spaces, detail and water features between the buildings are superb. The landscape design marries well with Meier’s architecture, adding colour to the rough-cut travertine surfaces, contrast to his cool geometry and using planting in a strikingly modern and minimalist manner.

The Southern Promontory Garden has wonderful geometric plantings of cacti that complement the buildings, and in the Museum Courtyard, in winter, (the time of my last visit) the tree branches and bark gave sculptural accent and shadows to the roughly cut travertine and white panels of the buildings. The scheme has an air of sophistication, serenity, and is undoubtedly Meier’s finest project and one of the great buildings of the late 20th century. 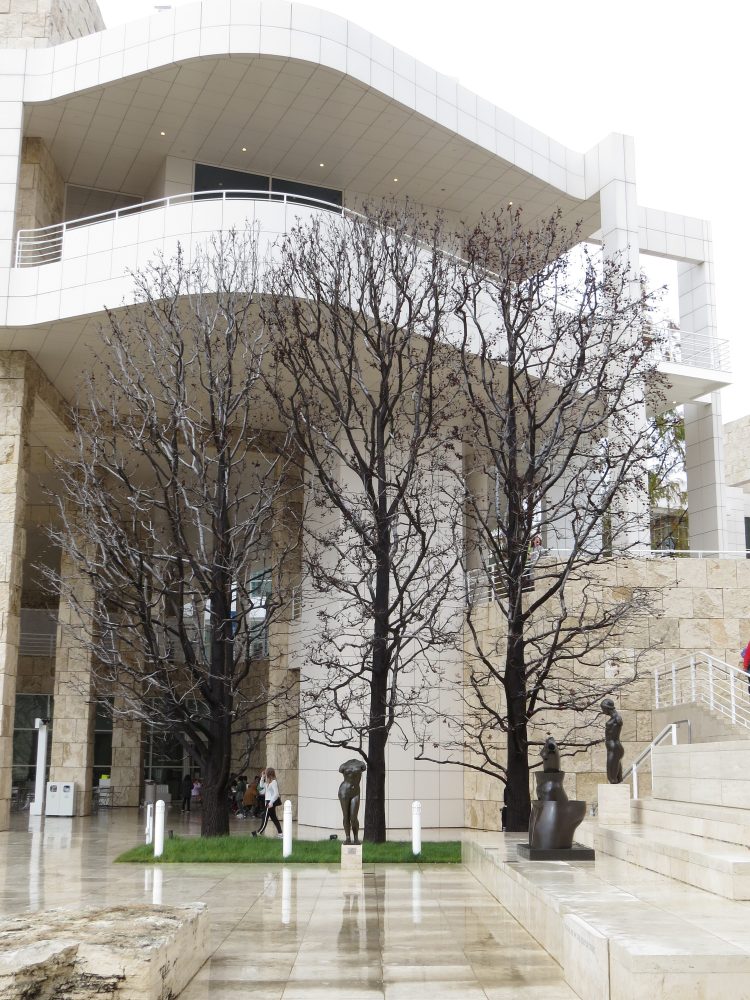 Winter Silhouettes against the Fran and Ray Stark Sculpture Terrace

His proposal for the canyon, the Central Garden, was for a staircase progression of broad rectangular terraces with a water course slicing down the middle. His points of reference were the gardens of the 13th century Moorish Alhambra Palace in Granada and the Italian Baroque garden of Villa d’Este, at Tivoli just outside Rome – two of my favourite gardens. Judging by the landscaping carried out elsewhere on the site, I have no doubt it would have been superb. However, the Getty were unconvinced and appointed the artist Robert Irwin to design the Central Garden. Meier was apoplectic. 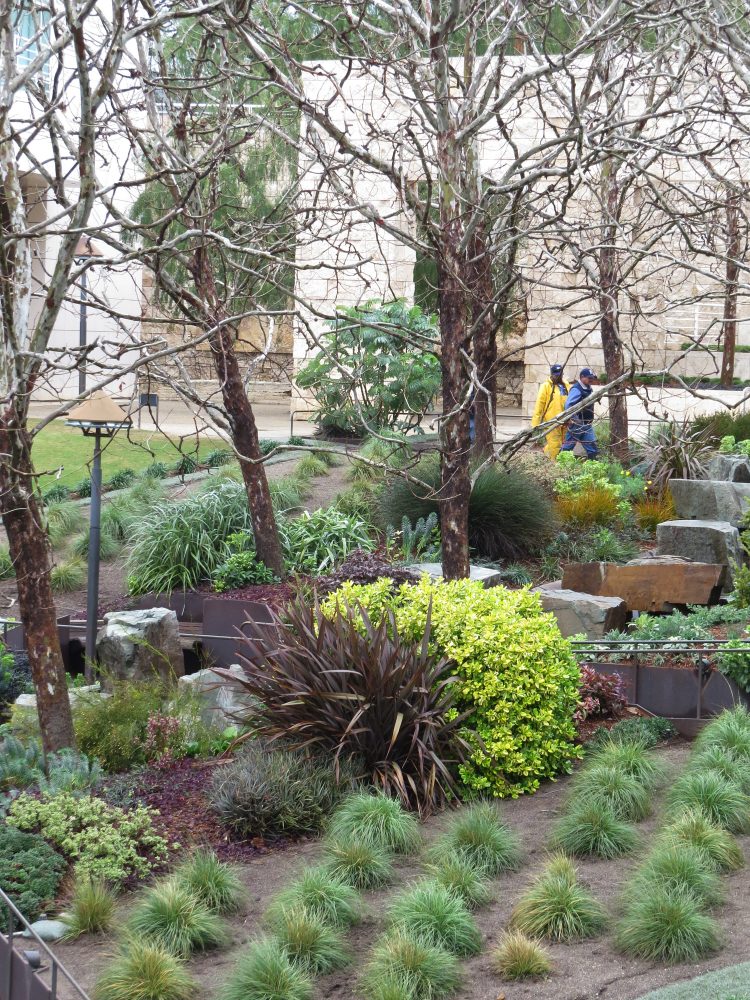 Planting to the Central Garden

Irwin’s proposal was for ‘a sculpture in the form of a garden aspiring to be art,’ and that his ever-changing installation ‘would be always in the process of becoming.’ To my mind, this translates as ‘I’ve got a great concept, the detail may be a bit hazy, but it’ll get better.’ Meier’s conflicting concept was of calm, geometric order, permanence and eternal values and although directed by the Trust to collaborate, the relationship between architect and artist soon broke down. A physical boundary line had to be established across the site separating their areas of influence, something I once had the misfortune to experience when designing and planting a country project in Sussex and having to deal with a truculent estate manager. 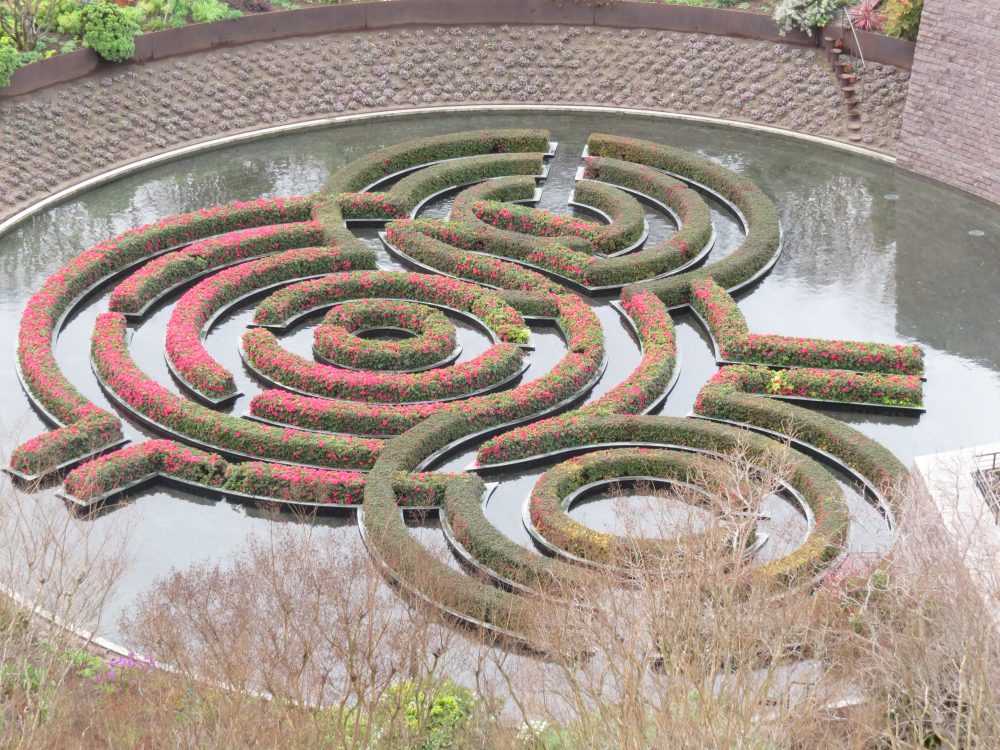 Robert Irwin was an abstract impressionist who moved into installation art and freely admitted that he had no knowledge of plants. Visitors descend into the Central Garden along a sandstone path that zig-zags across a stream and through planting beds and is bordered by London plane trees woven together to form a green canopy. Much of the disappointing planting was being ripped out at the time of my second visit. Of course, only twenty years on, it must still be ‘in the process of becoming.’ 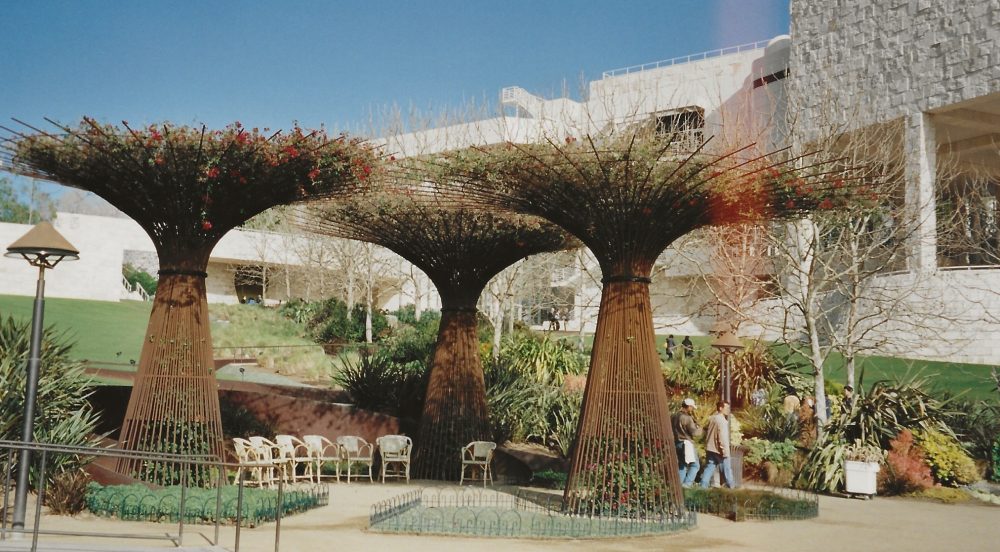 The stream finally plunges down a stepped stone wall ending up in a mirror pool upon which seems to float a maze of red, purple and pink azaleas. On the adjacent terraces are tree-like parasols of bent steel bars covered in purple bougainvillea. This part of the Central Garden works well, and its bold and iconic concepts are best over-viewed from the adjacent museum terraces.

When finally opened in 1997 the project cost an eye-watering $1.3 billion, and that said, I think it’s a pity that on such a large site that the Getty didn’t find the shaggy donkey its own pasture some distance away.