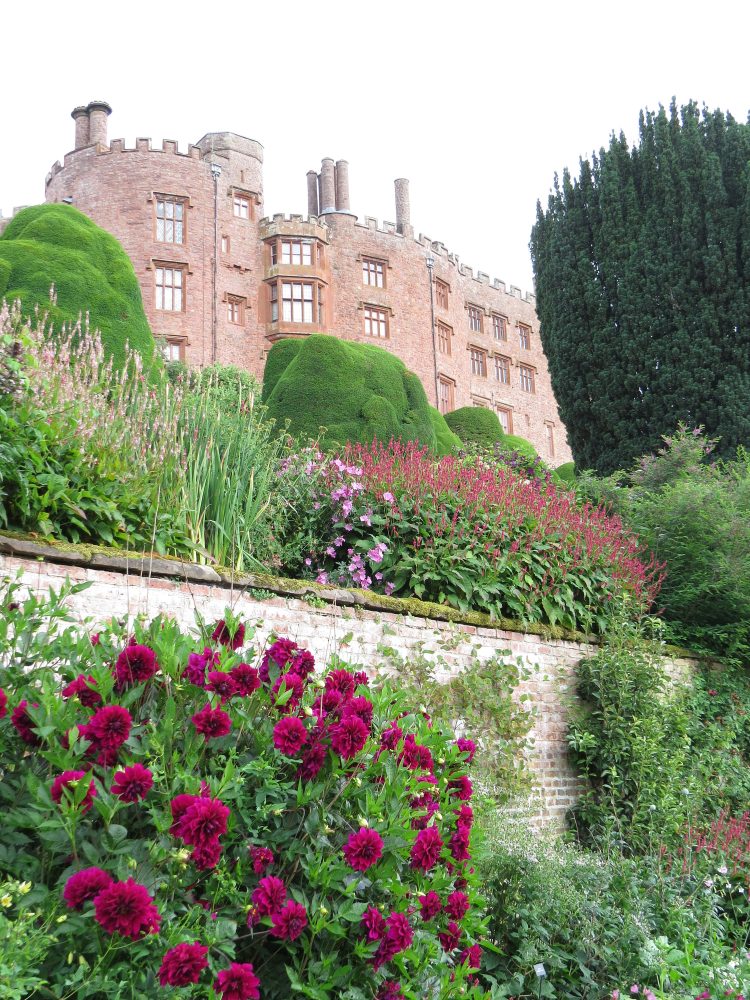 Powis’s Exuberant Planting Against the Backdrop of the Castle

Powis is one of the most spectacular and best planted gardens of Britain, and so why has it been hobbled by its history?

Most great gardens are built over the remains of previous gardens, but at Powis this is not the case. The spectacular Italianate terraces of the late 17th and early 18th century sit side by side with the wonderful English landscape park and Wilderness added in the late 18th century, whilst in the early 20th century the kitchen gardens were replaced by formal Edwardian ones. What we have today is not the best of what was in the past. Whilst the mandate of the National Trust, to whom Powis was bequeathed, is to preserve what is donated to them there are historical precedents for re-instatement. 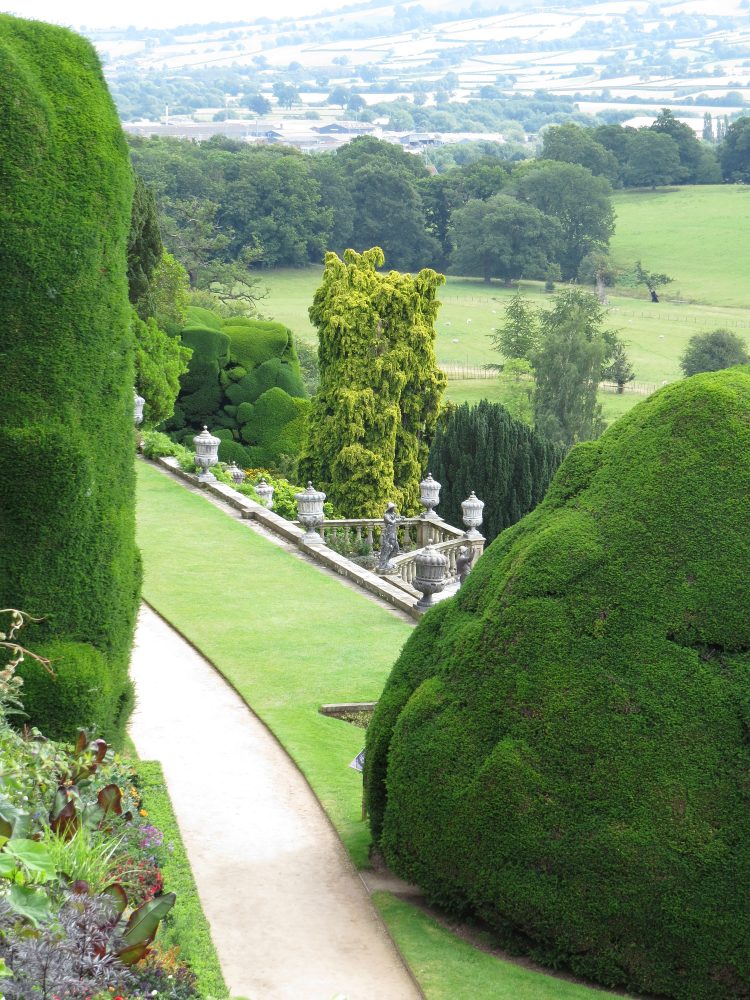 View over the Top Terrace

Powis’s first designer was the architect William Winde, who in the early 1680s was commissioned by the William Herbert, 1st. Marquess of Powis, to blast out a series of terraces on the south-facing red sandstone ridge on which the medieval castle is located. The ridge steeply descended 150 metres (450 feet) to swampy meadows. The removal of the rock, construction of the terraces, some 20 metres (60 feet) wide, building of retaining walls and import of huge quantities of soil was a massive project, abandoned when Herbert fled to France with the deposed Catholic king, James II.

In 1703 his son returned from Holland with the French garden designer, Adrian Duval, to create a spectacular Baroque garden consisting of formal Italianate terraces leading down a grand central staircase to a Water Garden and Cascade in the Dutch style.  The Water Garden consisted of large ornamental water basins separated by areas of grass, with a formal layout of topiary and wonderful life-size lead figures from the workshop of the famous Belgian sculptor, Van Nost, (many of which still remain at Powis). 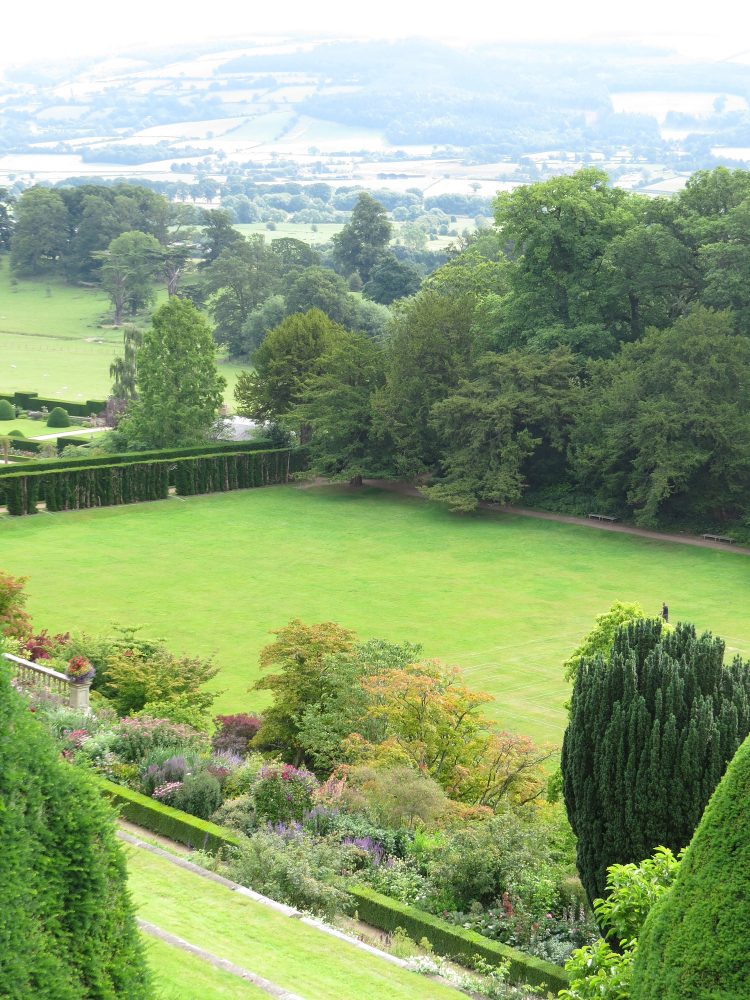 The Great Lawn and Wilderness Beyond

By the 1770s the garden was looking old-fashioned and William Emes, the under-rated contemporary of Capability Brown, was employed to add an English Landscape Garden. To the north of the castle, a road was moved and a new main drive formed, which today winds up through wonderful landscaped parkland. To the south, beyond the Water Garden a natural Wilderness was planted that formed a backdrop to the garden, whilst to the east a row of elms was planted to hide the kitchen gardens.

His alterations were a sensitive enhancement of the garden, but also throw up an interesting question. Why were the dated Italianate terraces and particularly the Water Garden retained?  It would have been comparatively easy to create a serpentine lake in the new style on the site of the Water Garden. Emes, like Brown, saw himself as ‘an improver’ so my guess is that there was a loss of interest. Within a few years, by the late 1780s, the terraces were reported to have fallen into a state of disrepair and the castle little used. 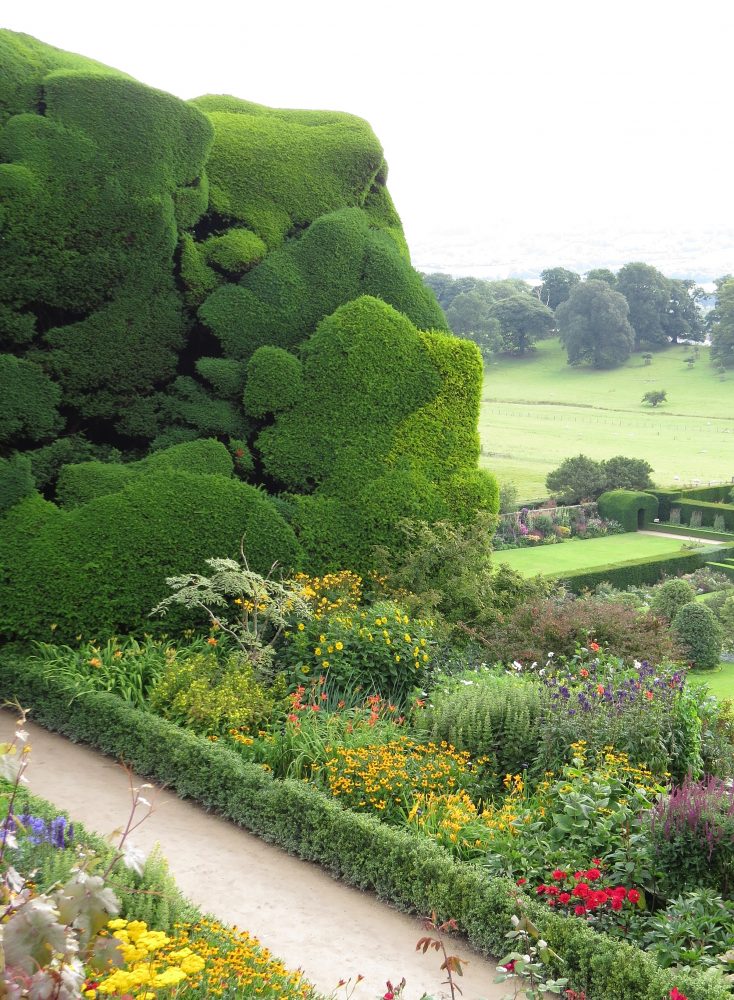 Subsequently, Powis passed to Edward Clive, son of Clive of India, who had established the political and economic supremacy of the East India Company in Bengal and made himself a fortune. In the early 1800s the gardens were restored and simplified and the old-fashioned Water Garden swept away and replaced by the enormous Great Lawn. The stream that fed the Water Garden was channelled in a culvert under the new lawn.  A great garden needs the counter-balancing effect of water, either in the form of expansive ‘mirrors’ of water reflecting the changing skies, or large fountains with water basins; Powis now had neither. 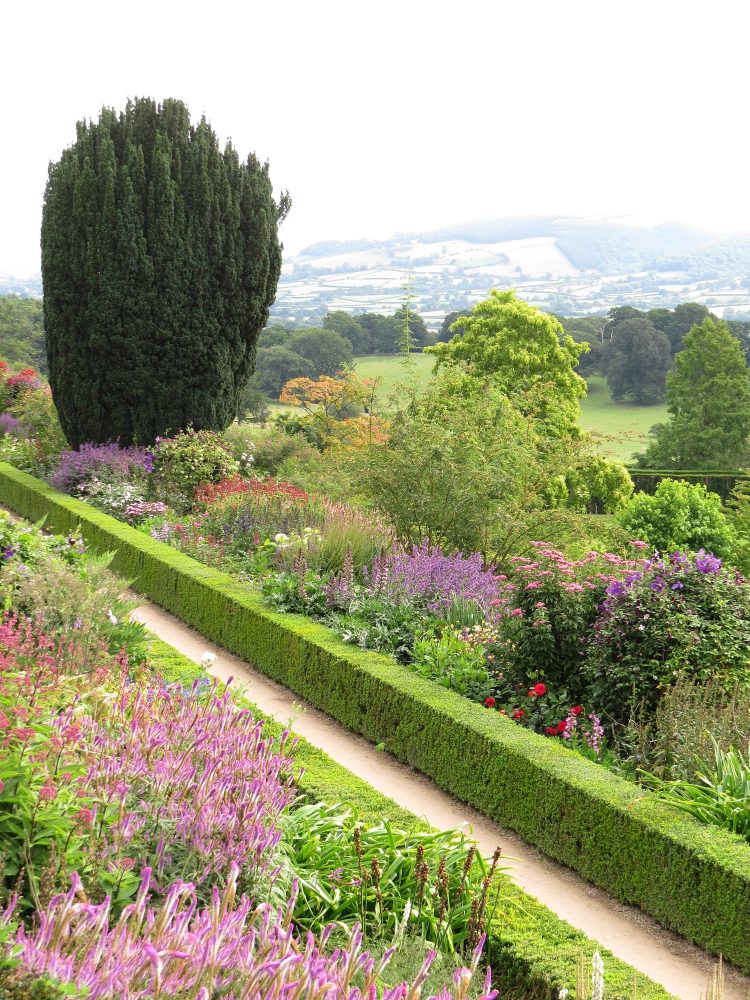 The Double Borders of The Orangery Terrace

The next major makeover to the garden was in Edwardian times instigated by Violet, Countess of Powis, who restored the Italianate terraces and replanted them as perennial borders in the Arts and Crafts style of Gertrude Jekyll. She must have been familiar with the spectacular new Baroque-styled water garden being built for the Duke of Marlborough at Blenheim, and the thought must have crossed her mind as to whether to rebuild her Water Garden. Was it lack of money, interest or imagination that prevented Britain having a Baroque garden to rival the spectacular Villa d’Este, near Rome?

Violet’s most significant changes to the layout of the garden were to the east, where the row of elms planted to hide the kitchen garden were taken out, a clipped yew walk created in its place, and the kitchen garden moved from view behind the Wilderness. The former Kitchen Garden was developed as three new garden areas, the Formal Garden, Croquet Lawn and Fountain Garden, all of which could be seen from the castle and the terraces.

These garden areas would have benefited from the strong guiding hand of one of the great Edwardian garden designers, such as Lutyens, and Violet’s scheme fails to excite. The Formal Garden seems over-sized and has an avenue of widely-spaced trained apple and pear trees set in beds of carpet planting, with a long vine-covered arch set on a cross axis; whilst the Croquet Lawn and Fountain Garden are both large open spaces that, despite excellent planting, lack good structure. 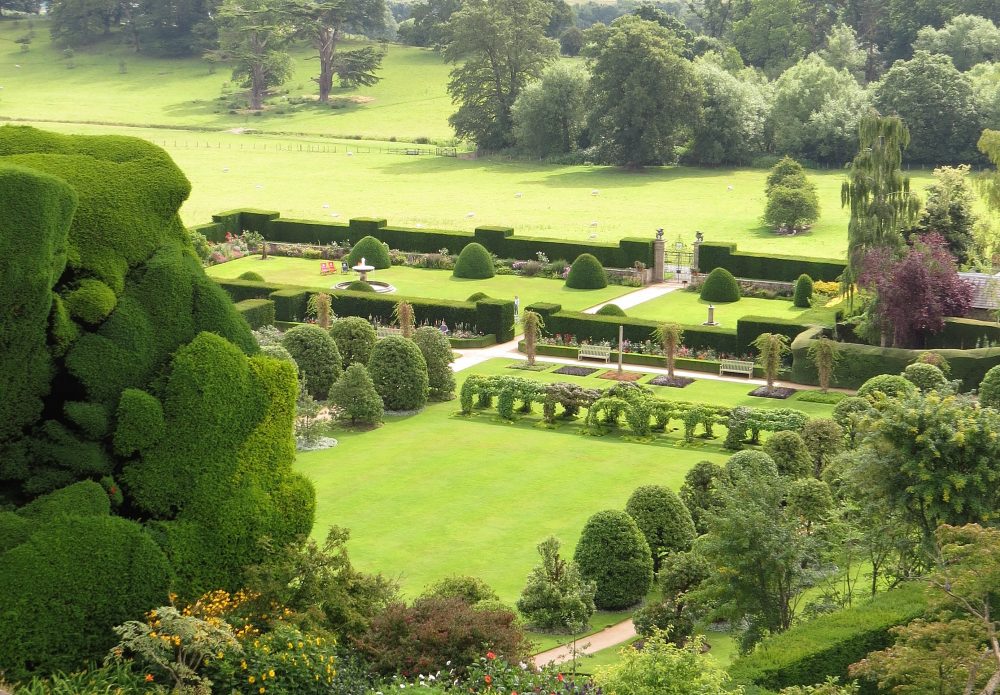 The Formal and Fountain Gardens

Violet’s greatest contribution to Powis was the planting, and under a succession of talented head gardeners the garden has established a formidable horticultural reputation. Passing to the National Trust in 1952, it has gone from strength to strength funded by their resources, manpower and a willing army of volunteers. Nowhere is the planting more spectacular than on the Aviary and Orangery Terraces where the southerly aspect and reflected heat from the walls create a sub-tropical microclimate. The Aviary Terrace has thin, dry soils appropriate for its Mediterranean planting, whilst the deep soil of the Orangery Terrace favours the exuberant sub-tropical planting.

The garden’s most iconic feature is its yew ‘tumps;’ formal, clipped topiary that was allowed to grow into trees in the 19th century, and clipped again at a later date. These are up to 14 metres (42 feet) high, and have the appearance of large pieces of organic sculpture that counter-balance the fine Edwardian borders. 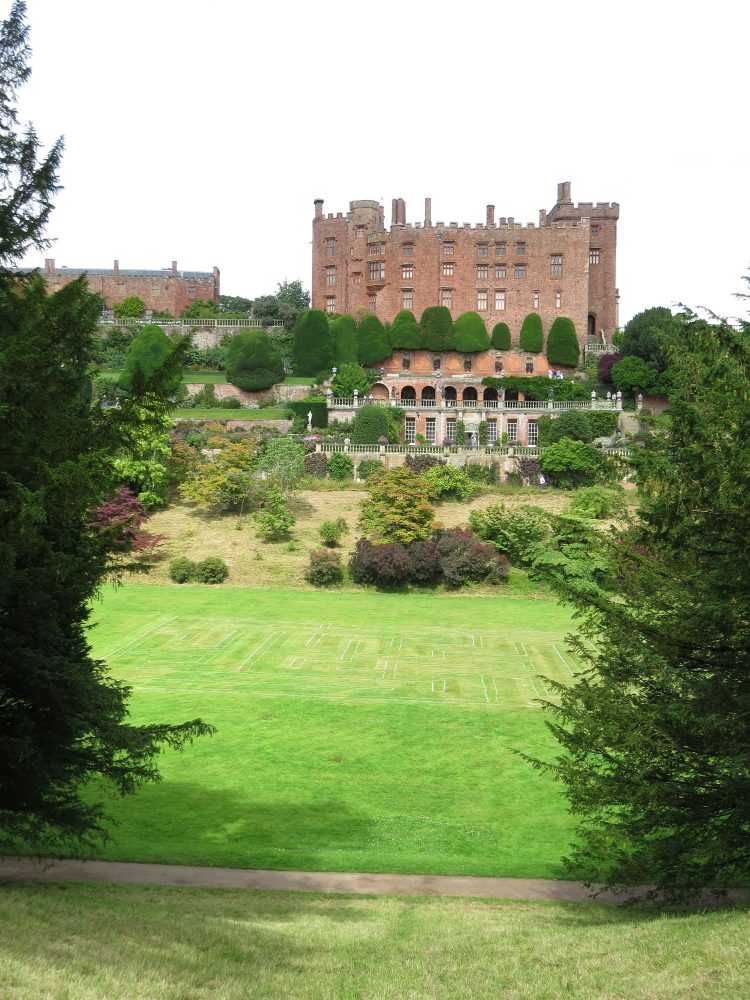 The Site of The Former Water Garden

Powis is undoubtedly a great garden, but I would like to see the National Trust be pro-active in launching an ambitious project to rebuild the Water Gardens and Cascade. Such an undertaking would be within their mandate and precedents have previously been set at other National Trust gardens, for example, the £20 million restoration of Stowe. Powys could then rightly claim to be one of the great Baroque gardens of Europe.