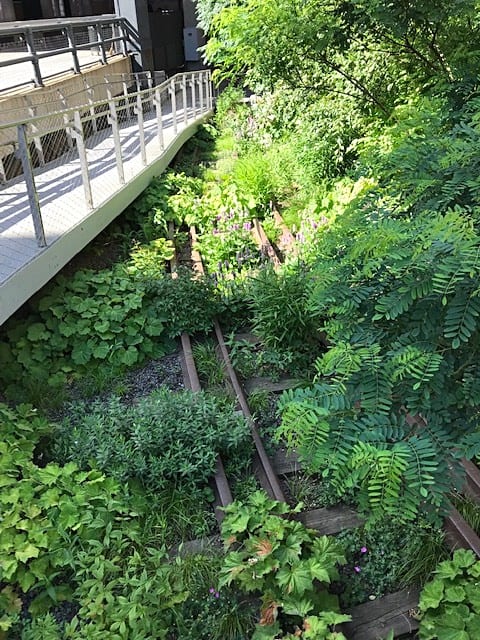 ‘Not since Central Park opened in 1857 has a park reshaped New Yorkers’ thinking about public space and the city more profoundly.’ 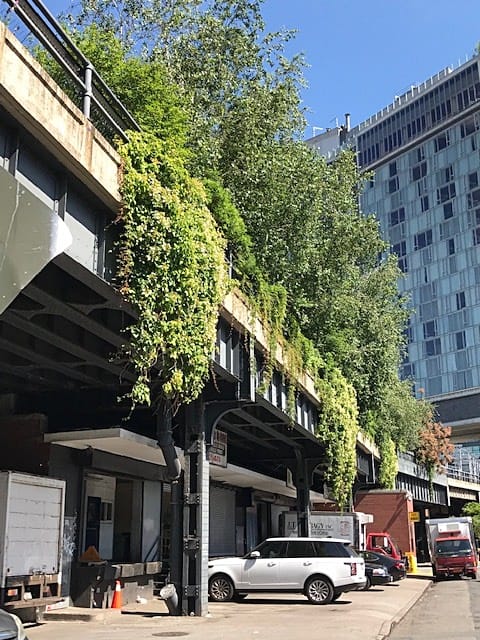 That’s not what Joshua David and Robert Hammond intended when they founded the Friends of the High Line in 1999. Their inspiration had been the Promenade Plantee in Paris, a 2.9 mile (4.7 km) disused railway line that ran south-east from Opera Bastille through urban and leafy suburban residential districts on viaducts, at ground level and through cuttings. Instigated and paid for by the City of Paris, the Promenade Plantee is much used by local residents for its quiet reflective garden areas, for dog-walking, cycling, running, its children’s playgrounds and petanque courts for older residents. 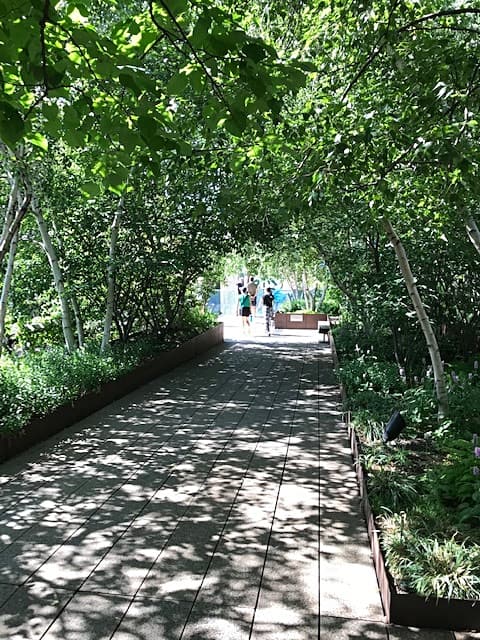 The pair later admitted that the New York High Line had not met the needs of the residents of the numerous local housing projects by becoming a major visitor attraction, by its lack of provision for children and its ban on dog-walking and bicycles, but does this really matter? Just a few blocks away is the superb Battery Park beside the Hudson River (somewhere that should be on every garden visitor’s itinerary) where all these needs are met. 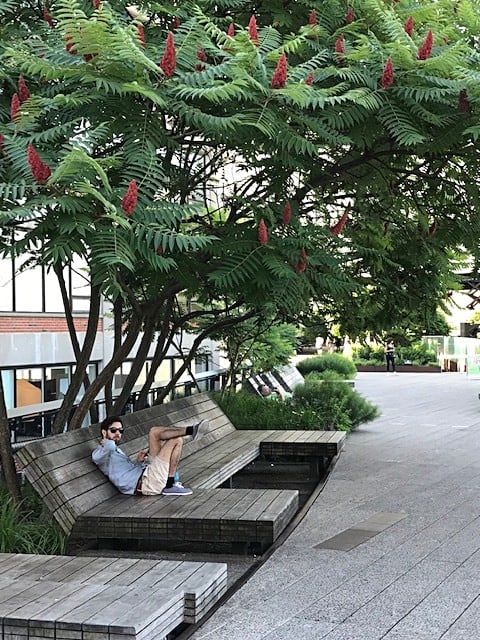 The High Line caught people’s imagination, and following a design competition, support for the project grew rapidly and major corporate sponsors such as Goldman Sachs, the Tiffany Foundation and Google came on board, and influential politicians like Michael Bloomberg, Mayor of the City of New York, and Hillary Clinton. The City committed $50 million to the project, whilst supporters raised $150 million and CSX Transportation donated sections of the track. With such high-profile support this was never going to be a local people’s park. 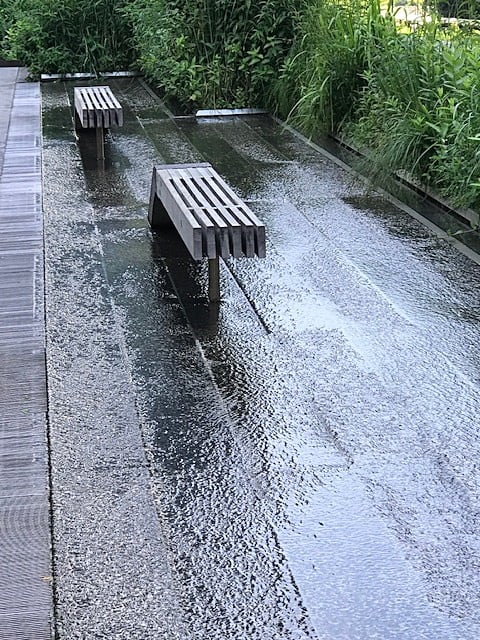 It was in 1847 that the City of New York authorised the construction of railroad tracks through the tight grid of bustling, frenetic streets of Manhattan’s West Side to bring meat and dairy produce into the warehouses and factories of the Meatpacking District. There were many accidents and deaths and so the railroad hired ‘West Side Cowboys’ to ride on horses before the trains waving red flags; then in the 1930s the railroad solved the problem by building tracks three storeys above street level to raise the dangerous freight trains from the streets. The growth of delivery by trucks made this railway system obsolete and the last trains ran in 1980. Many sections of the elevated railroad network were subsequently demolished and it was the threat of demolition that galvanised David and Hammond to found the Friends of the High Line. 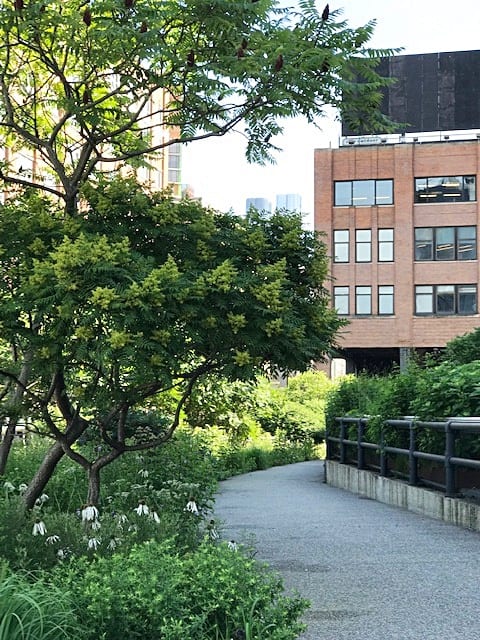 The competition winners and subsequent designers, James Corner Field Operations and Diller Scofidio + Rentro have created a beautiful series of varied, interesting landscaped spaces, with consistent detailing and use of materials, and with narrow and wide paths swinging from side to side providing limited and broad views over the city and the Hudson River. The High Line opened in stages, the first in 2009, then 2011, 2014 and the final stage ‘The Spur’ in spring 2019. The planting by the Dutch master, Piet Oudolf, has now matured into forest groves of amelanchier, acer, birch and sumac, open prairie inspired areas and skilful shade planting. From the outset Oudolf encouraged a feeling of wildness, reminiscent of the self-seeded and abandoned railroad viaduct, and in places long strips of paving with planting between suggests nature is taking over.  Over half the plant species are native American, with few species flowering at the same time. 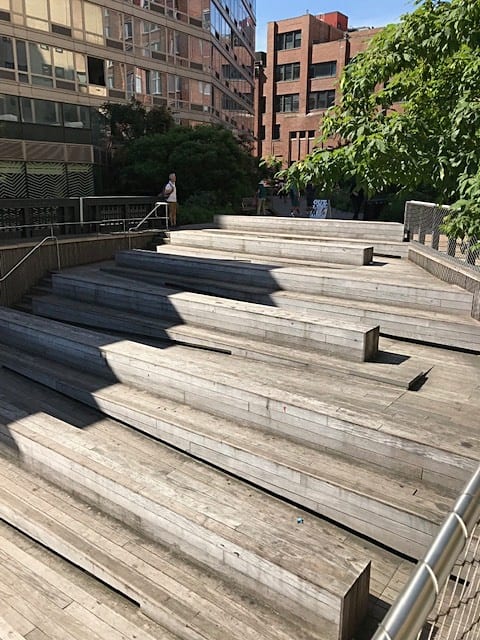 The huge popularity of the High Line with over 5 million visitors a year channelled into a narrow linear park has earned it the reputation with local residents as ‘a tourist-clogged cat walk’, and to appreciate its intended tranquillity and the sense of gliding over the teeming city, it is best to visit in early morning or late evening.

The project’s success has contributed to the major urban regeneration of the West Side, with the Javit Conference Centre and the shops, residential and office accommodation of Hudson’s Yards at the north end, and the numerous galleries and arty boutiques clustered around the new Whitney Museum of American Art at the south end. The High Line sponsors various public multi-media projects through the summer months including art installations, dance parties, star-gazing and performance. 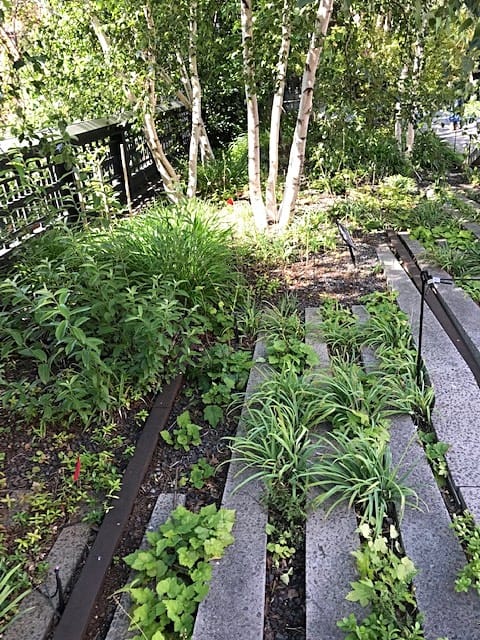 Surprisingly, wheelchair access is not a problem with five of the eleven entry points having lifts. The Friends of the High Line act as primary stewards responsible for daily operation and maintenance of the park, funded mostly by private and corporate donation. The scale of the project, its level of maintenance and its high standard require 80 full-time employees and an army of full-time seasonal summer employees. As the project is open all year, the clearance of heavy snow fall can be a serious issue. 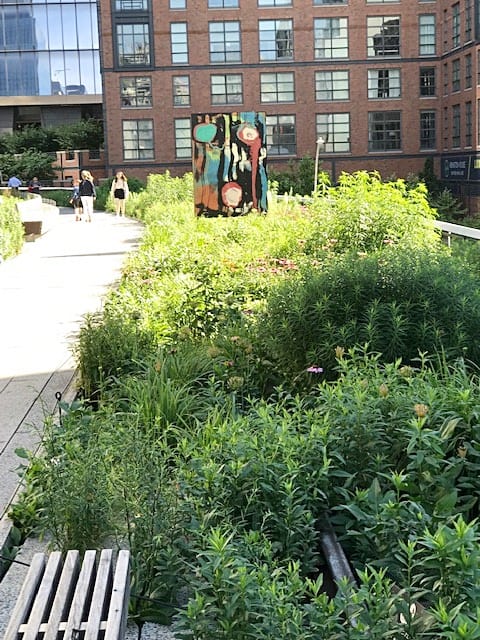 The New York High Line can rightly claim to be the 21st century’s most important landscape design project, one that has spawned interest and design proposals for similar schemes in many cities around the world; most notably in Singapore where the Lines of Life project, at 10 times the length of the New York High Line, is in an advanced design stage. As the population densities of our inner cities increase, it will become increasingly necessary for redundant urban infrastructure to be re-envisaged as public open space, and the New York High Line sets the bar very high.