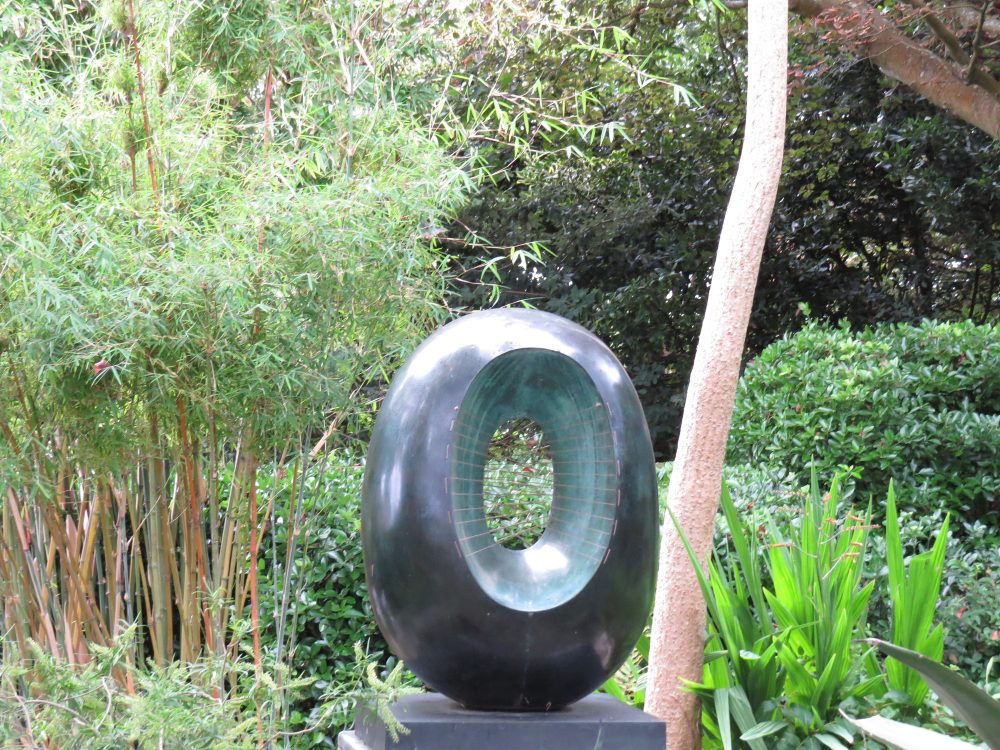 Forget the Trebahs, Trewithins, Trelessicks and Tre ..whatever… this garden is the highlight of any trip to Cornwall, and despite its diminutive size is the most exciting and remarkable garden I saw last year. 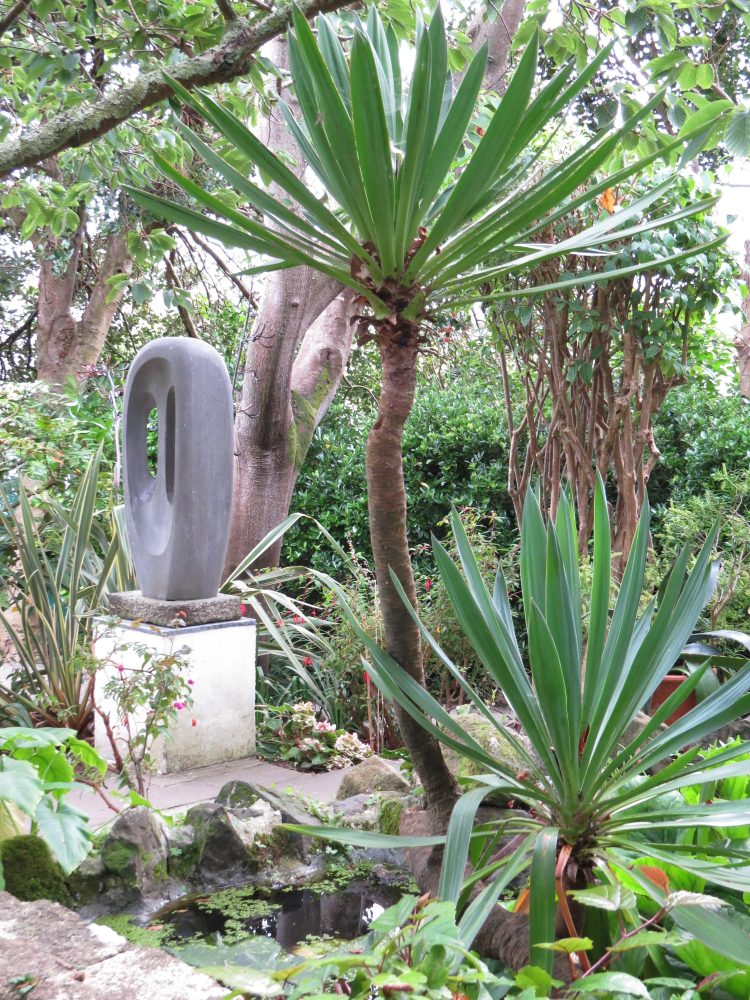 It was the quality of the light that led Barbara Hepworth and her artist husband Ben Nicholson to the small busy fishing port of St Ives (like many artists in the inter-war years). Some ten years later, in 1949, she bought the Trewyn Studio, a small stone-built and white-washed fisherman’s cottage set on a steep hillside and remained there until her death in 1975, in an horrific fire caused by a fallen lit cigarette whilst she lay sleeping. 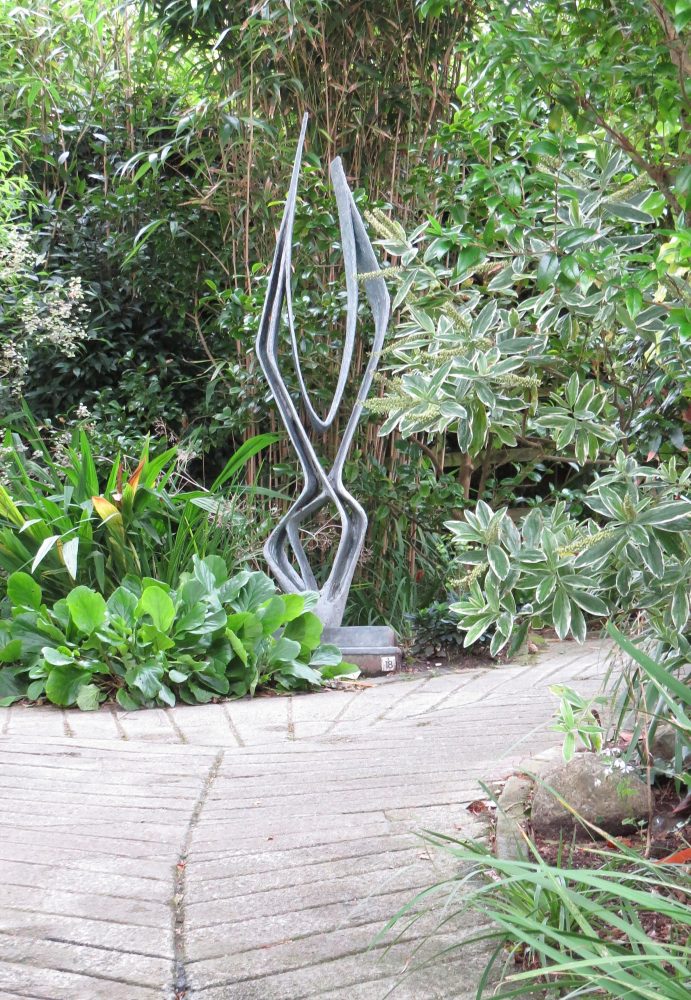 In 1956, Hepworth who had been primarily a sculptor in wood and stone, started experimenting with metal and bronze which gave her a greater freedom of size and form, and from this time her reputation grew rapidly. A close friend of Henry Moore, she collaborated with Piet Mondrian, Alexander Calder, Jean Arp and others, and following her success in the Sao Paulo Biennial in Brazil and an exhibition in Japan she became internationally recognised as one of the foremost women artists of the 20th century. 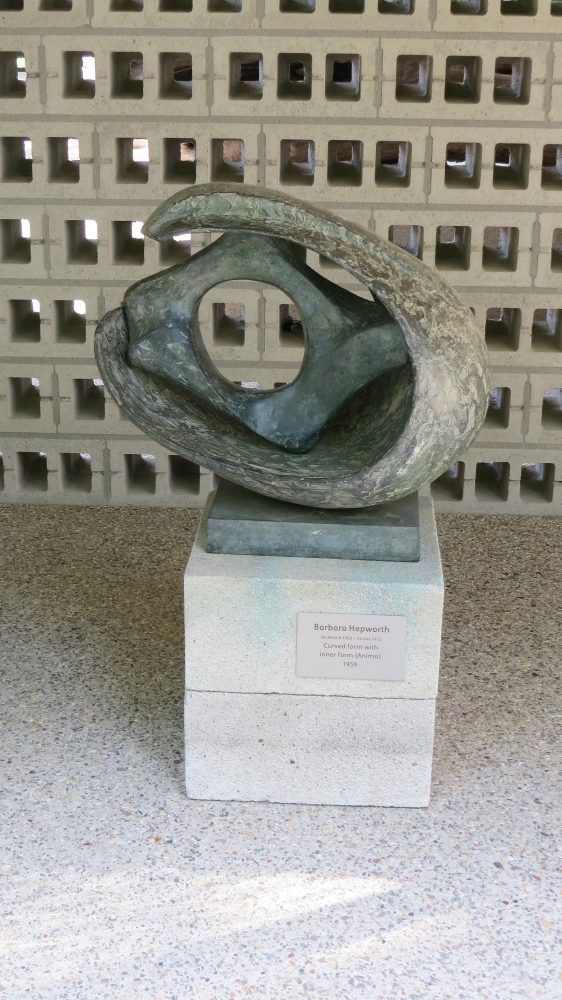 Some half dozen or so of her works are included in the Rietveld Pavilion at the Kroller-Muller Sculpture Garden in Otterlo, The Netherlands, but the poor quality of the display illustrates the importance of a sculpture’s setting and why St Ives is so successful. 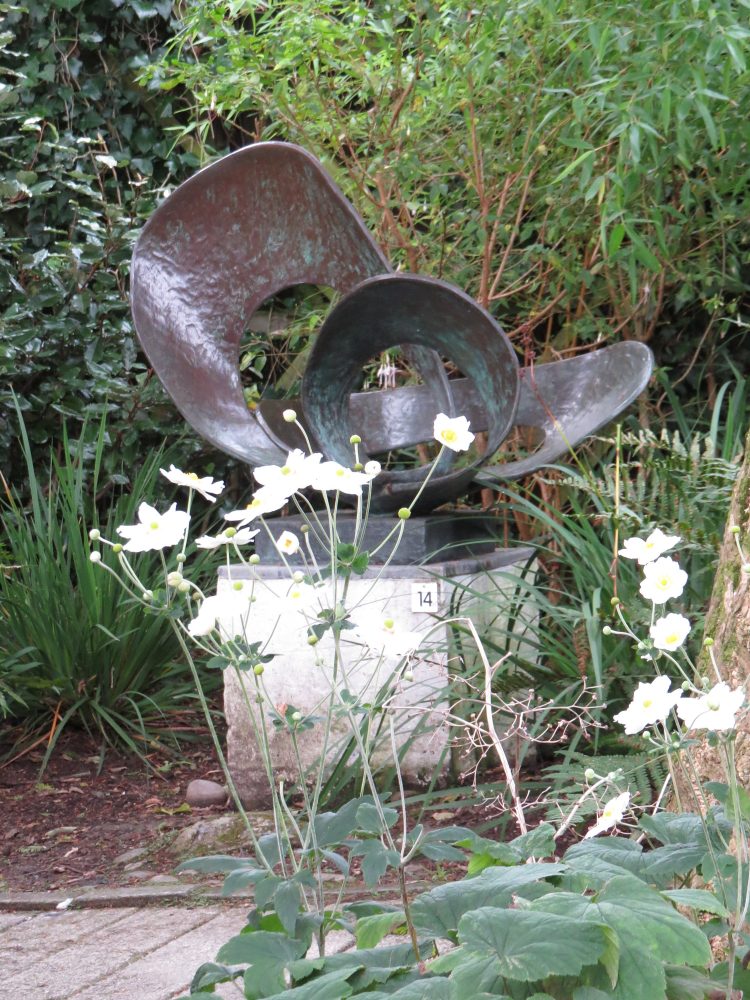 Hepworth, and her composer friend Priaulx Rainier laid out the garden and she developed it over time, carefully siting each of the casts of her new bronzes (some 22 in total); which together with the stone and wood sculptures in the museum make this an unrivalled collection of her work. 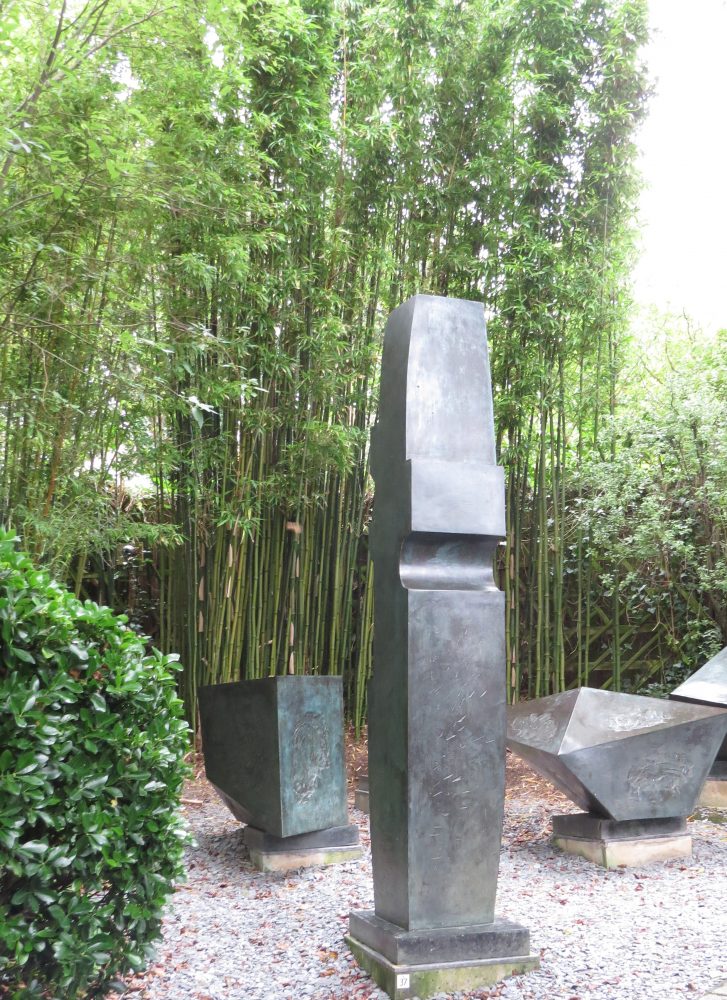 The steeply sloping garden, at first floor level to the cottage museum, is set on two levels, and shaded by mature oak trees on the upper level. It is enclosed by high walls and hedges, with views over the slate roofs of the town to the sea, and the play of sunlight and shadow adds to its charm. The carefully considered planting is mostly different shades and shapes of bold evergreens – agaves, phormiums, mahonia, bamboo and other architectural plants but with a few flowers – at the time of my September visit, mostly white Japanese anenomes and ginger lilies.  It is the sensationally good sculpture that makes this a great garden, the planting playing a strong contrasting, balancing and supportive role. 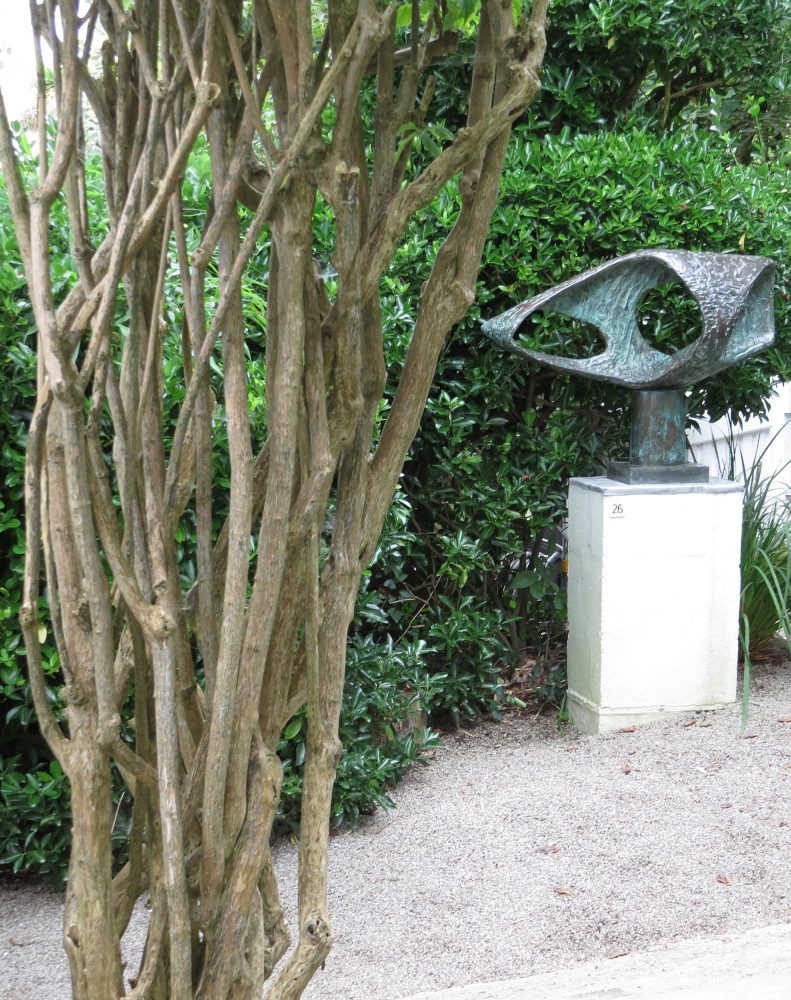 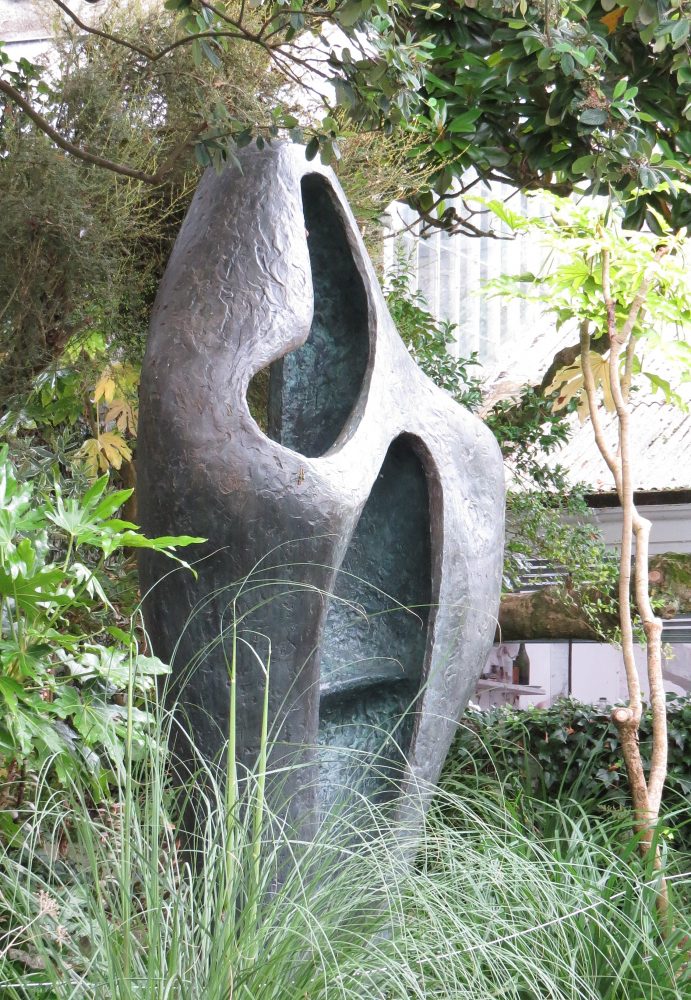 Unlike Henry Moore, whose bronze sculptures tend to be abstractions of the human figure that work well set in landscape, most of Hepworth’s work is more intimate and organic in nature, seeking a classical perfection of form that lends itself well to a garden setting. At first, I found that I was looking at the sculptures as freestanding objects, then as objects against a planted backdrop and finally and most excitingly as a skilful play of space and form with the eye drawn through the sculpture to the planting and other sculptures beyond.

The garden gives a unique insight into how nature and her abstract style work so well together. If I had to nominate a garden of the year, this remarkable garden would be my first choice. 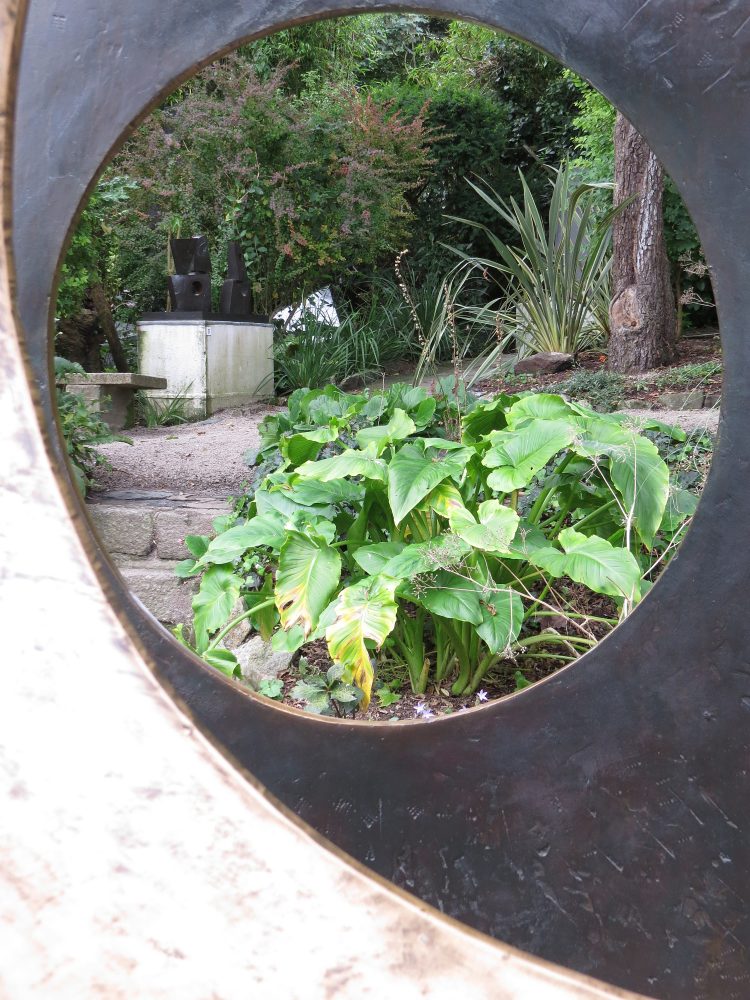 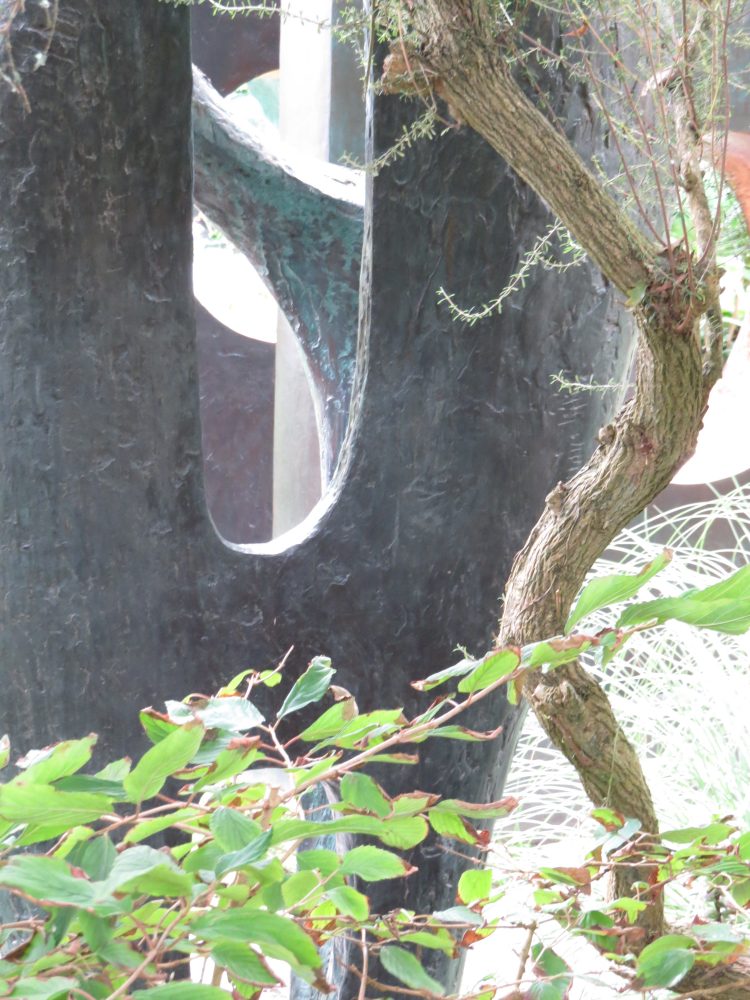