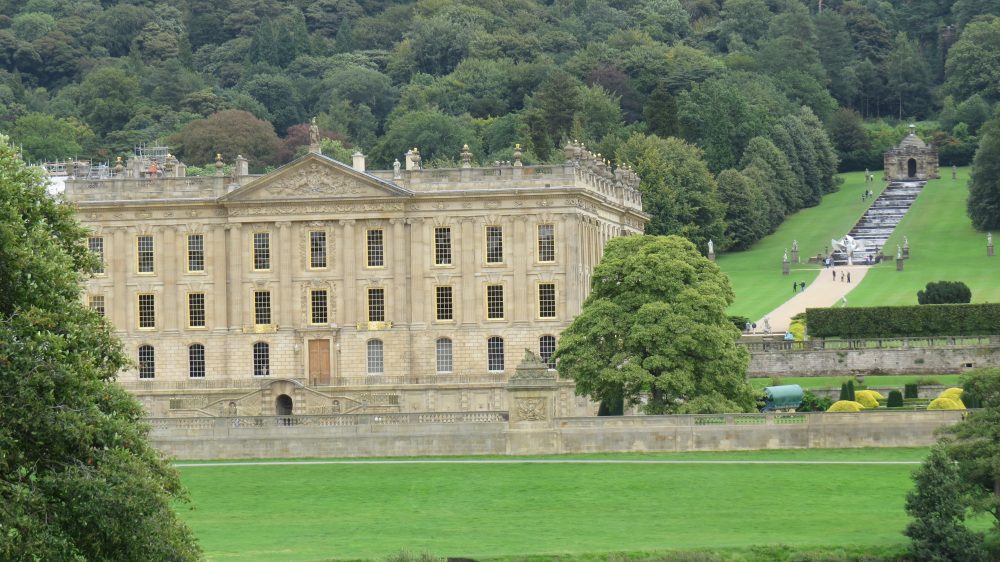 Chatsworth House from the River Derwent

A few years ago, on a visit to Versailles, I was shocked by the restoration of the Courtyard façade on the approach from the town. Built in the late 17th century for Louis XIV, the over-use of gold screamed wealth and power and to our eyes bad taste. At the same time, in England, William Cavendish 1st Duke of Devonshire was rebuilding Chatsworth as ‘the English Versailles.’

‘Bling’ has many historical antecedents and at a recent history festival, Peregrine Cavendish, the 12th Duke of Devonshire, (affectionately known as ‘Stoker’) compared his famous ancestor the 1st Duke to President Donald Trump. The 1st Duke ‘was enthusiastic to let people know he had made it big…. he gilded everything in sight (at Chatsworth) …… it’s incomparably vulgar,’ but then Stoker might just be a bit sour because the Chatsworth House Trust has recently completed a £32 million restoration project requiring prodigious use of gold leaf. 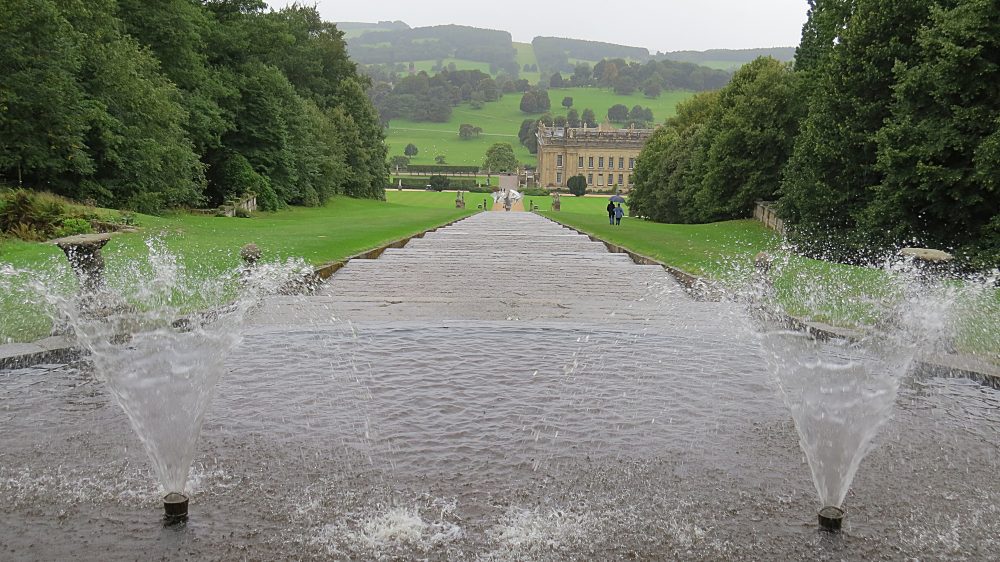 View from the top of The Cascade

The 1st Duke’s grandiloquent ‘English Versailles’ needed a garden to complement it and George London and Henry Wise were appointed to create intricate parterres, ponds and pools, walks and areas of wilderness.  Chatsworth’s most memorable and unique feature, The Cascade, was created at this time by Grillet, a protégé of Le Notre, the water falling over 24 steps each slightly different in shape and texture so that the sound varied as the water flowed and fell.  To complete the composition, the Cascade House at its head was built in 1703 by architect Thomas Archer. 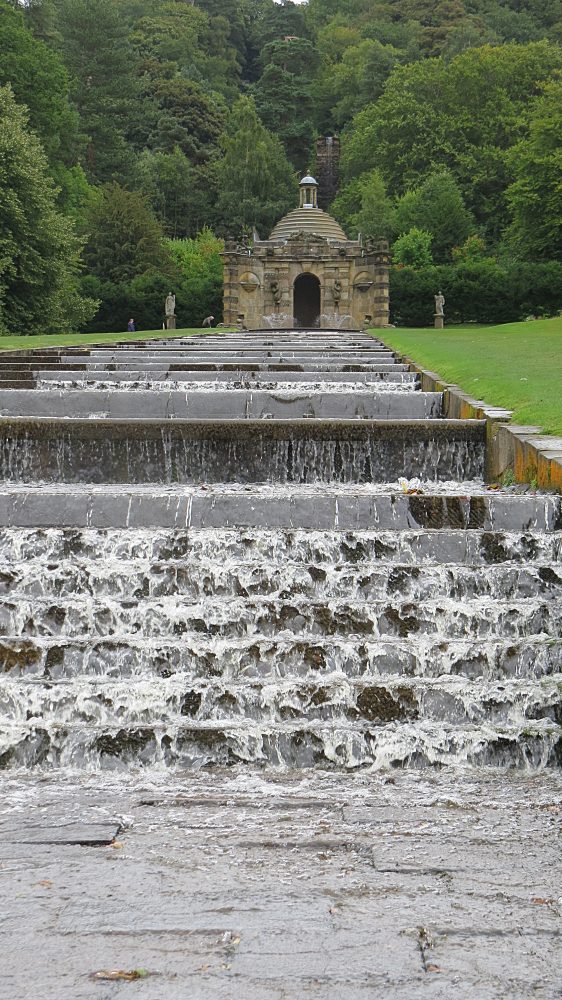 Amongst Chatsworth’s other best-known features are the spectacular Canal Pond dug in 1702 and the playful Willow Tree Fountain that squirts water on the unsuspecting visitor. By the Duke’s death in 1707 the great Versailles-styled garden was largely complete. 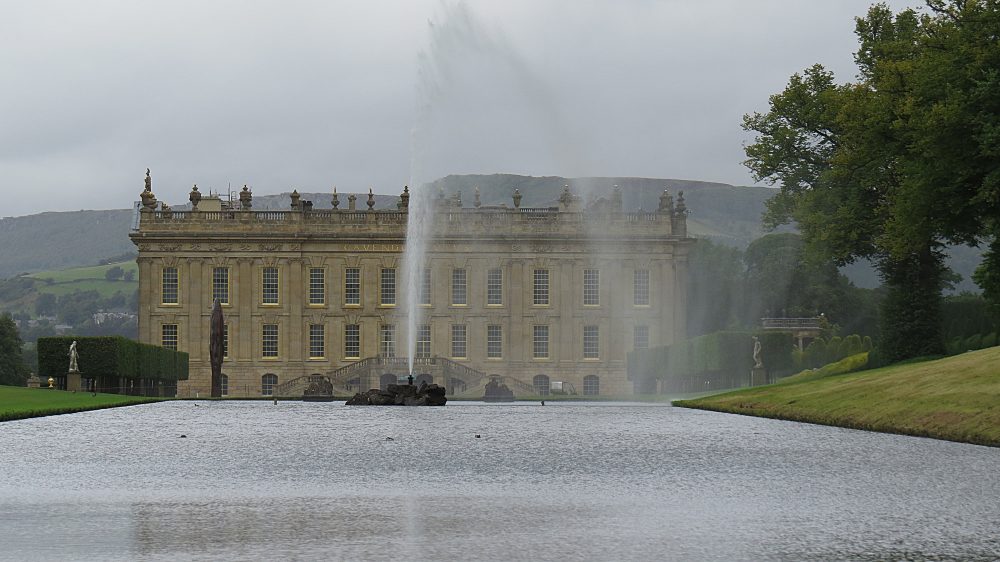 The Canal Pond and Emperor Fountain

As the 18th century progressed the influence of William Kent’s more naturalistic landscape style came to the fore. The parterres at Chatsworth were grassed over, the plantations of yew and holly allowed to run wild and the garden slowly became a period piece out of step with its time.

The 4th Duke had inherited Chatsworth in 1735 and upon the death of his wife Charlotte in 1754, Chiswick House and the vast Burlington estates passed into the Cavendish family leaving money to be spent on Chatsworth. The Duke wanted a new landscape that displayed his wealth and power in a more discreetly English way, whilst at the same time being beautiful, practical and profitable. Lancelot ‘Capability’ Brown was clearly the man for the job. 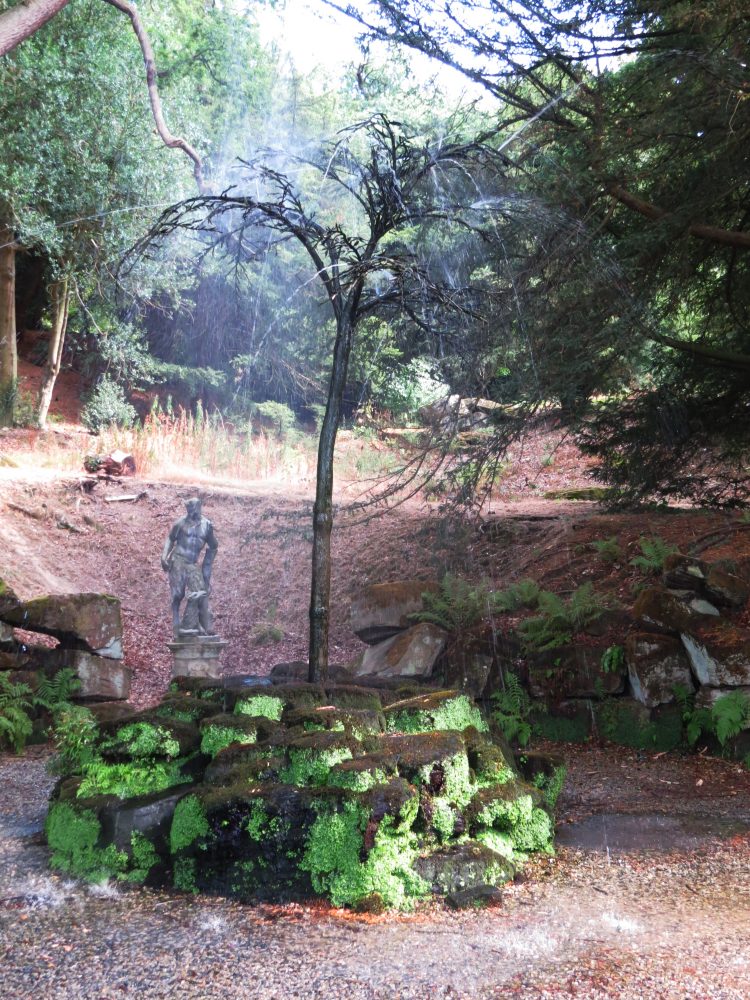 The Duke required a new avenue approach to Chatsworth from the west which Brown designed as an oblique serpentine route that winds down into the Derwent valley and gives breath-taking views over the house before crossing the fine new stone three-arched bridge. The Duke was explicit in that he didn’t want a lake, and so Brown created weirs on the fast-flowing river, and reduced the steep banks into gradual slopes, making the river appear more placid.

The park was extensively landscaped with wedge-shaped plantations that could be successively felled for their timber as the next section was growing on. This retained the continuity of the wooded skyline and gave a sense of enclosure to the house.  Grassed parterres were swept away (apart from a small walled area which remains as the private family garden), and the Salisbury Lawns were created in front of the Cascade, together with an extensive system of land drainage to solve the problems of stormwater. 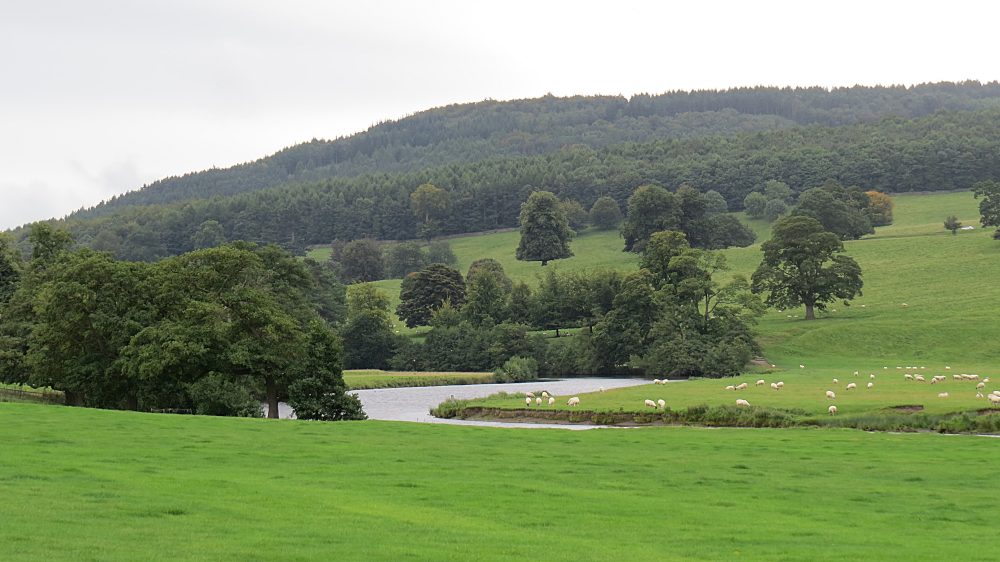 By the time the 6th Duke succeeded to the title in 1811, the estates had grown to over 200,000 acres, the income from which enabled the Duke to indulge his passion for gardening, horticulture and plant collection. The arboretum and pinetum date from this time, together with the bizarre and massive rock outcrop known as The Rockeries built by The Duke’s new head gardener, Joseph Paxton. With architect Decimus Burton, Paxton was to fulfil the Duke’s wildest ambition, the construction of the Great Conservatory. Covering over ¾ acre, the upkeep required 20 gardeners and a small railway to bring coal under the hills to the eight underground boilers.  The Great Conservatory was the world’s largest glass building at its time but some 80 years later, in the early 1920s, it had become semi-derelict and was demolished. 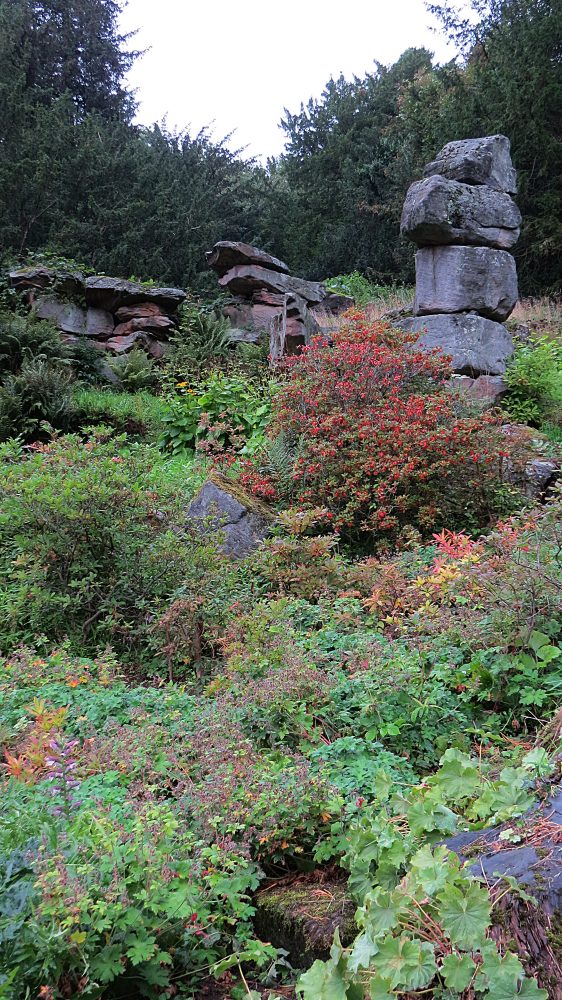 The 6th Duke had been Ambassador Extraordinary to the Russian Empire and attended the coronation of Emperor (Tsar) Nicholas I. The Duke had been impressed by the fountains at the palace of Peterhof and resolved to build something impressive and even higher in anticipation of the Tsar’s projected visit to Chatsworth. A colossal feed pond was built at the top of the adjoining ridge to provide the necessary pressure and volume of water for the 84 metre high ‘Emperor’s Fountain.’ The Tsar never came. 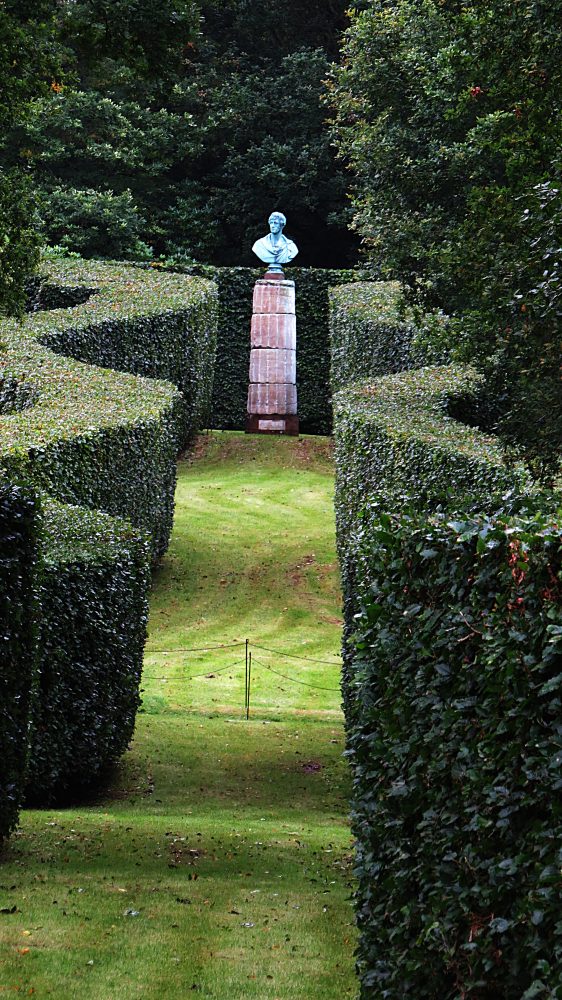 Death duties following the Second World War took Chatsworth to the brink of disaster, but it opened its doors to the public and in 1953 the beech Serpentine Hedges were planted to give an appropriate setting for a bust of the 6th Duke.  The hedgehog-like Display Greenhouse opened in 1970, and a series of small, and to my mind, disappointing gardens have been added including the Rose Garden, Cottage Garden, Kitchen and Sensory Gardens.

Chatsworth has not suffered the fate of so many of our great houses and estates during the 20th century, engulfed in sprawling cities or a sea of industrial-scale agricultural production. The Peak District National Park, the first of our national parks, was established in 1951 with the aim of conserving and enhancing the natural beauty of the countryside and giving access to the public for recreational pursuits.

Chatsworth now finds itself at the heart of this idyllic landscape of over 500 square miles of unspoilt moors and rolling verdant valleys; a wonderful time capsule that marks Chatsworth out as something very special.