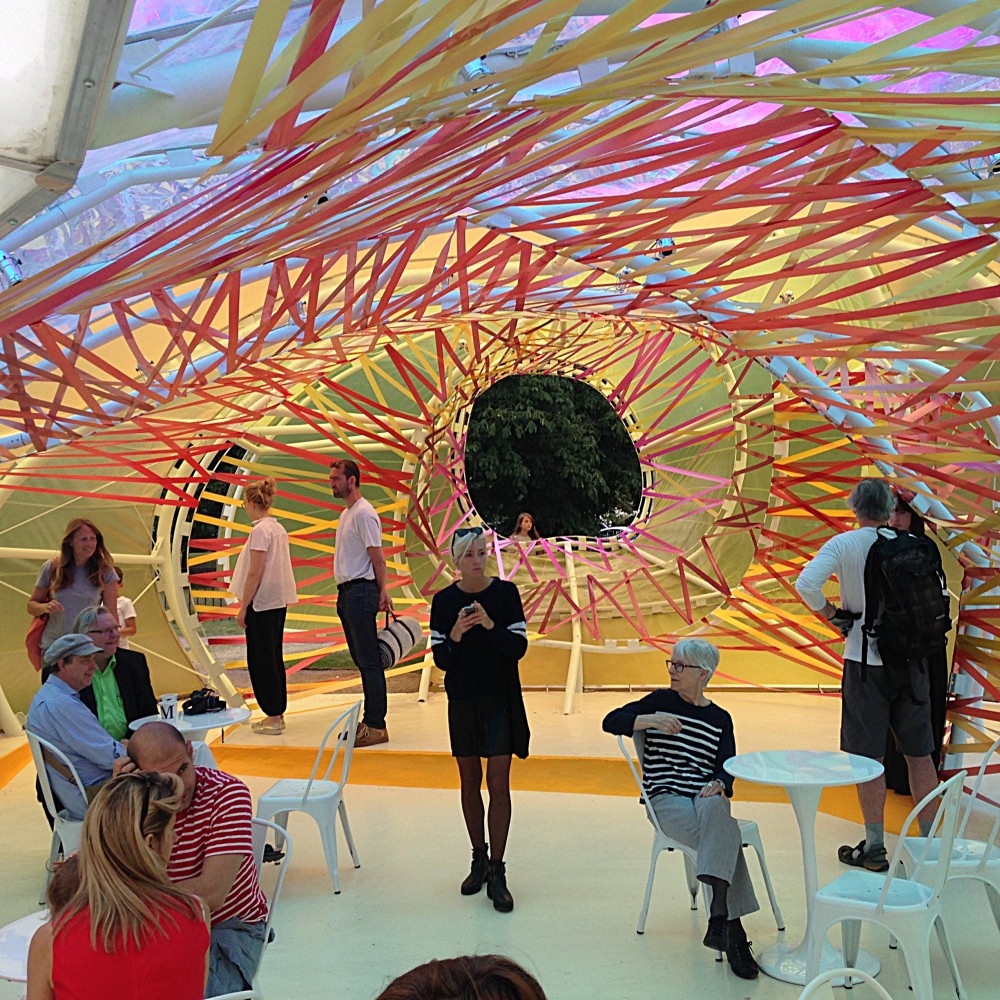 Interior of the Selgascano Pavilion – 2015

One of the highlights of my London summer, along with 200,000 other people is a visit to the Serpentine Pavilion.

Each year the Serpentine Gallery finds prestigious wealthy sponsors and chooses an internationally famous architect who have never built anything in this country. He or she is commissioned to design a small garden pavilion whose appearance is of greater importance than its practical purpose, that’s to say in historical terms, a folly. The pavilion is then sited in a prominent position in one of London’s most famous and best-used parks adjacent to the Serpentine Gallery. Some of the results have been spectacularly good creating new architectural language, others have been dismal failures – but that is part of the fun of it. 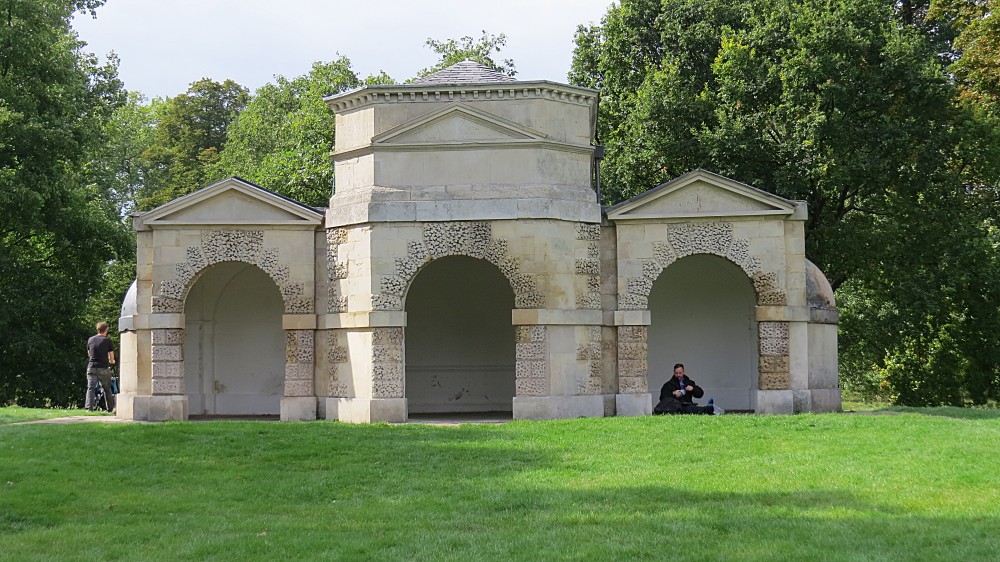 From the early 18th to the late19th centuries, follies were popular garden features in the English Landscape Garden and at Kensington Gardens the surviving folly, Queen Caroline’s Temple, is a neo-classical building stranded in a sea of seasonally-mown meadow grass. Compared to the ruined abbeys, Chinese temples and bridges, pyramids, crystalline grottoes, and hermitages that were springing up all over the country at the time this folly was a restrained affair probably intended for taking tea.

The British have always had a penchant for their follies, but in the functional post-war years of the mid-20th century the concept largely fell from favour. It was the Serpentine Gallery originally itself a tea house built in the mid 1930s that did much to revive the idea of the garden folly. Each folly (not a popular word in our straightened times and more tactfully known as a pavilion) is built as a temporary structure for the four summer months, the only practical requirement (in addition to the sponsors’ lavish summer parties) being that teas can be served to the public and that it can be a venue for small lectures and summer events. 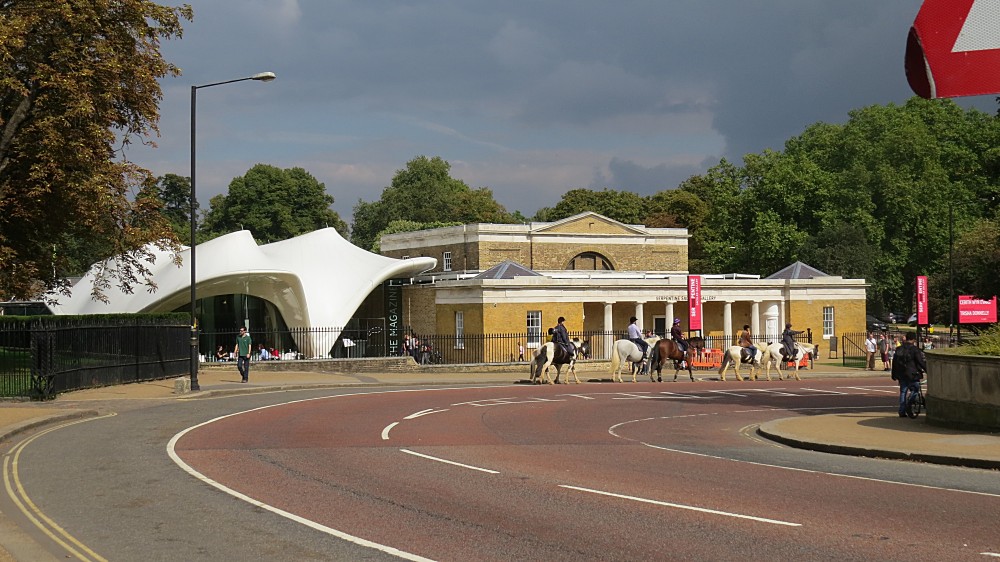 The Sackler Gallery and Magazine Restaurant

The first one, designed by Zaha Hadid, the Iraqi-British architect was erected in 2000. More recently she was chosen as the architect for the adjacent Sackler Gallery and Magazine Restaurant, just over the Serpentine on the Western Carriageway. This new gallery space managed by the Serpentine Gallery was a redundant brick-vaulted early 19th century gunpowder store whilst the attached new build restaurant seems very much in the tradition of follies, in that the novelty of its appearance is paramount.

Like some gigantic white plastic clam shell the restaurant’s juxtaposition to the neo-classical Magazine is challenging and I think largely successful (but let down by some untidy detailing). The spectacular columns of the interior of the restaurant give the exciting impression that the roof is slowly melting. 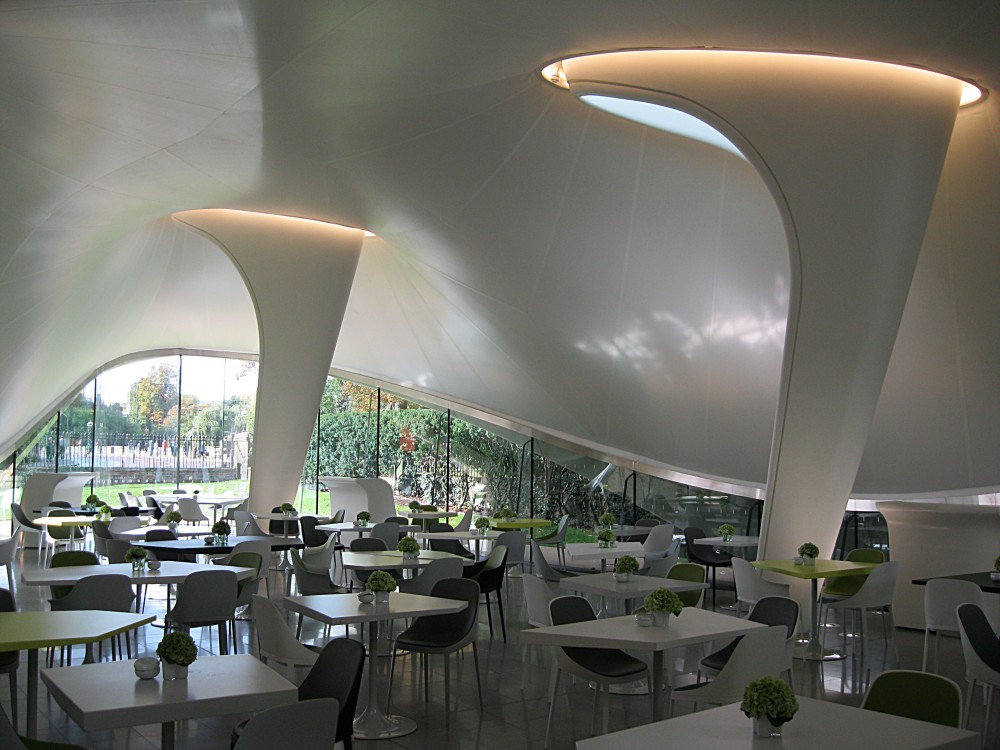 Interior of the Magazine Restaurant

Following Zaha Hadid’s first garden pavilion only one year has been missed (when the proposed pavilion proved to be unbuildable in the timescale). This is a remarkable achievement and says much for the Serpentine Gallery’s fund-raising and organisational skills. I’m sure that there was much soul-searching by gallery and sponsors in the recent years of deep recession.

In total fourteen practices of architects have been chosen to build the Serpentine Pavilions, some are well-known such as Frank Gehry (the Guggenheim Museum, Bilbao), and Herzog and Meuron with Ai Weiwei (the Bird’s Nest Stadium for the Beijing Olympics), Oscar Niemeyer and Jean Nouvel and others less so. My favourite pavilions which I felt added most to a modern architectural vocabulary were by Japanese architects; Kazuyo Sejima and Ryue Mishizawa of SANAA (2009), and Sou Fujimoto’s Cloud Pavilion (2013). . 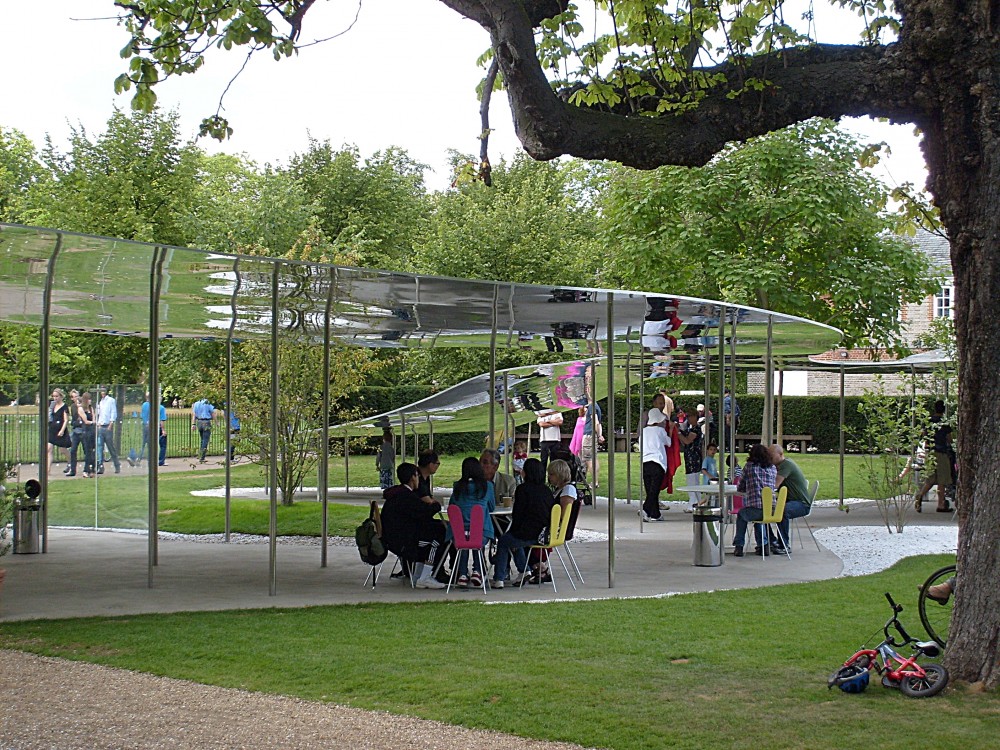 This year 2015 the Pavilion is designed by the Madrid-based practice of Jose Selgas and Lucia Cano (selgascano) and again breaks new ground. It is unusual in that it has more in common with the world of bouncy castles and children’s play structures, being a series of iridescent and translucent tubes that open into a central multi-purpose space. Children love it. The seemingly flimsy covering is high-tech ETFE which was used for the Eden Project, but here the tight shapes seem to make it look more fragile. It looks exactly what it is, a temporary structure, and its jolly gaudy playfulness is inspiring. It makes many of the previous years’ pavilions seem self-conscious and clunky.

At the end of their short public lives, the pavilions are demolished and usually become true follies, bought by wealthy collectors as pieces of architectural art. 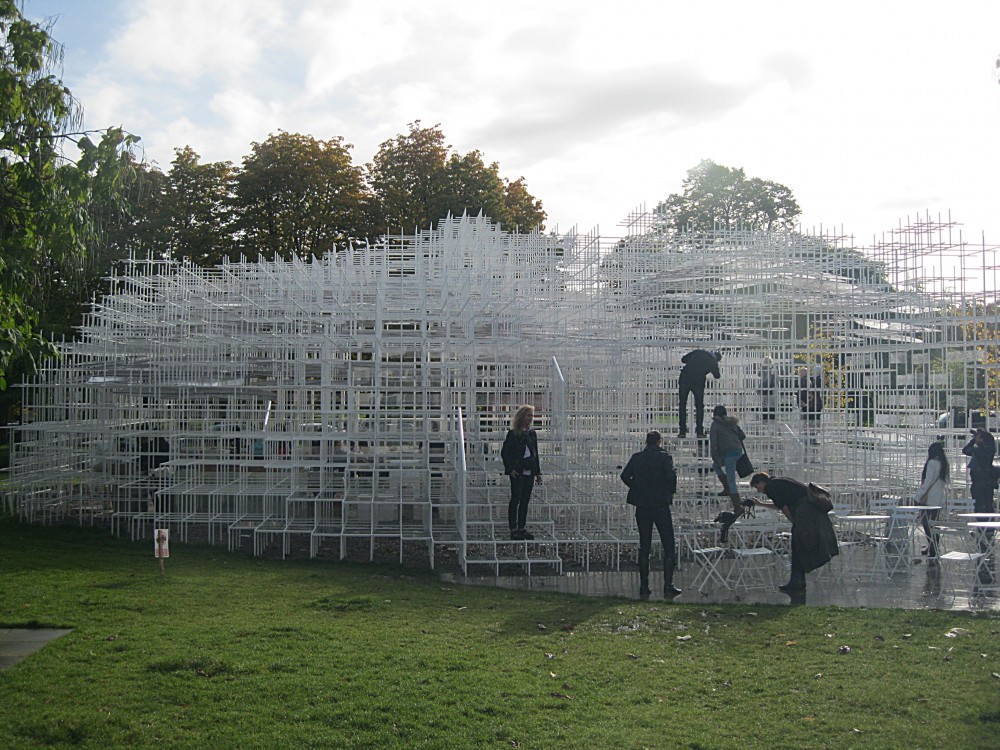 Not only is the Serpentine Gallery to be applauded for championing cutting edge creative architecture and presenting it to a wider public, but also the Royal Parks for their sensitive and enlightened approach to new developments in the park, such as the Magazine Restaurant and the Princess Diana Fountain. 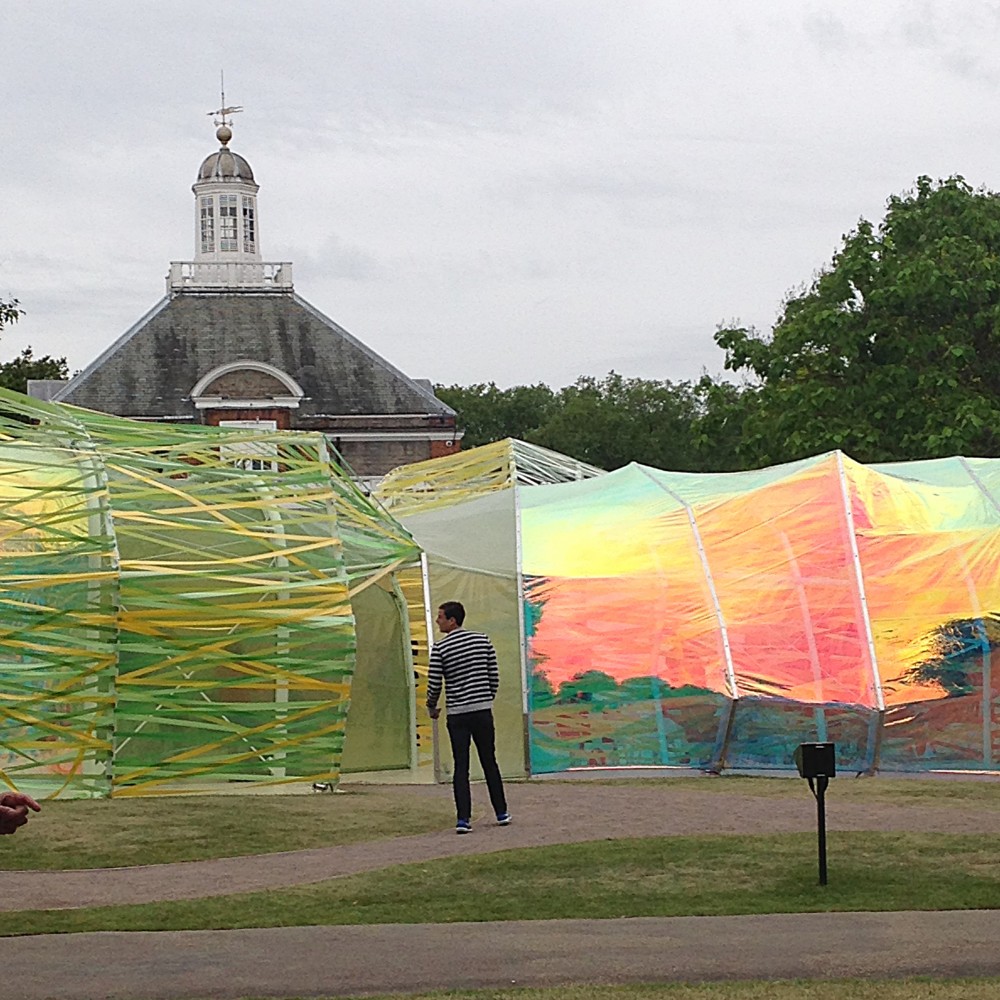 A review of Hyde Park and Kensington Gardens would be incomplete without a brief mention of the Princess Diana Fountain by American landscape architect Kathryn Gustafson and opened by the Queen in 2004. This is more accurately an oval-shaped Cornish granite rill built on a sloping site with a gentle stream falling down one side, whilst on the other water cascades over a series of rapids. Children of all ages find it irresistible.. 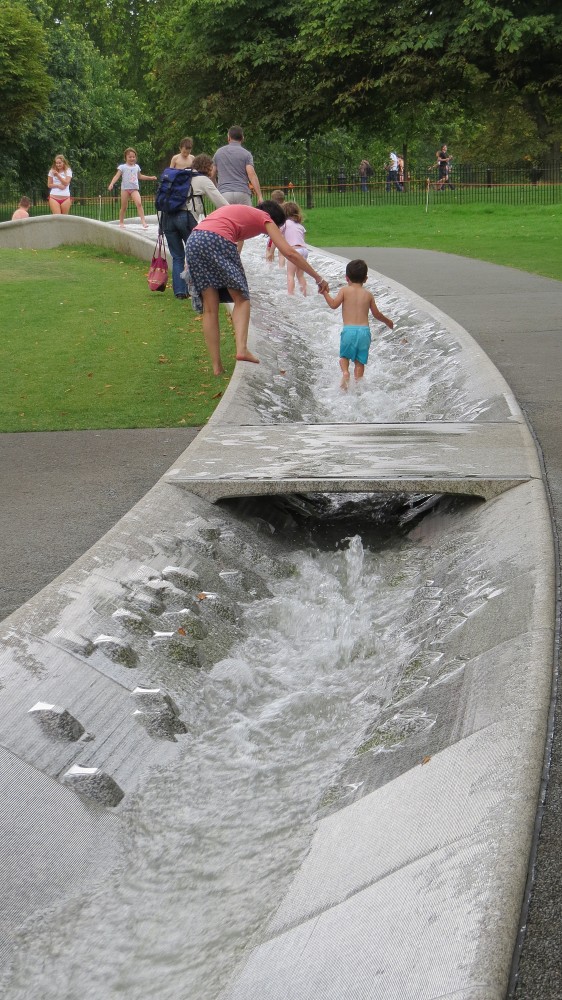 In many landscape parks the addition of new and temporary features breaks up the continuity of the park. By carefully siting these and other garden features, Hyde Park and Kensington Gardens remain a wonderfully coherent landscape. Perhaps it is because this park and these gardens are so familiar that they are taken for granted and under-valued and few garden guide books even give them a mention. For me their peaceful tranquillity combined with their enlightened creativity make them two of our finest parks.