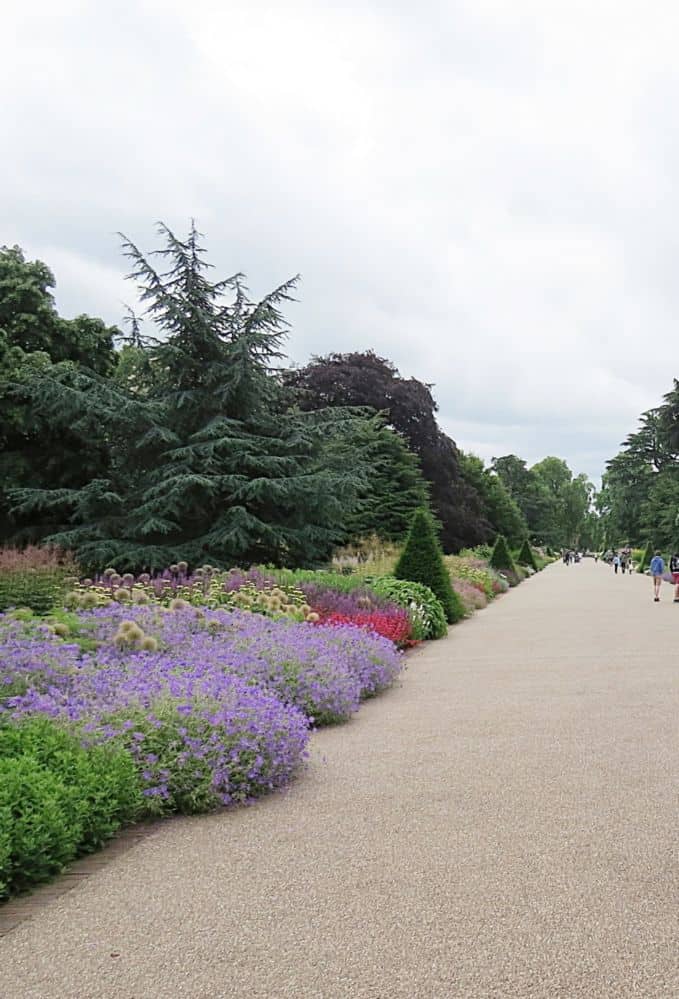 Kew is arguably the world’s finest botanical garden, and I have huge regard for the collection and the passion and foresight of all those involved, particularly in these times of diminishing government support. Recent innovations such as The Hive, and restorations such as the Temperate House and the Pagoda are exciting and to be celebrated. Kew is in good shape for the future. 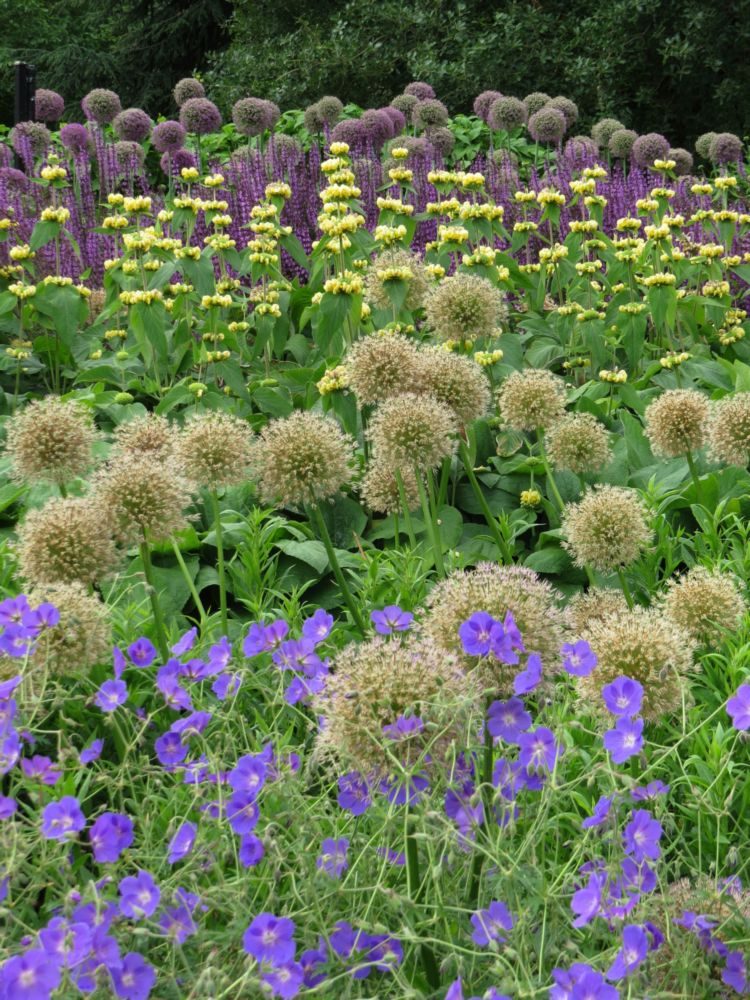 However, visits to other botanical gardens and plant collections make me realise what Kew does not do well. For example, I would like to see a garden area set aside describing invasive alien plants (Kirstenbosch), a garden of poisonous plants (Alnwick), and garden areas exploring the crops that we come across in our everyday life (Oxford and the Eden Project).  These would all help connect Kew’s many visitors with the everyday world of plants. 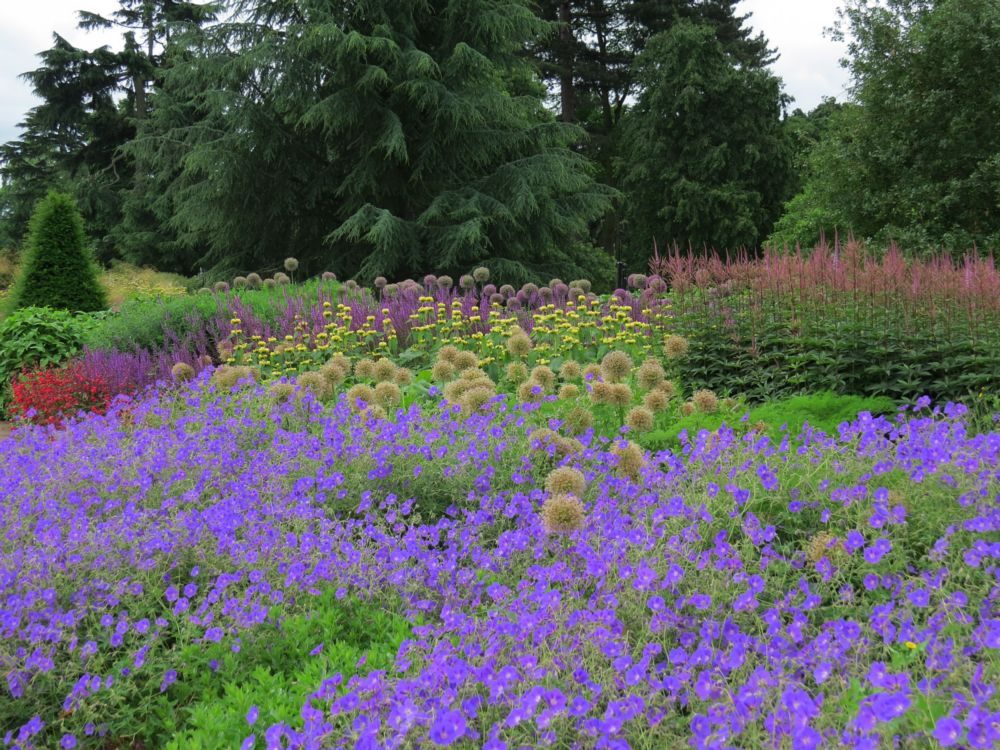 My final gripe was that Kew’s perennials seemed to have been banished to the least important and least visited parts of the garden. As one of Britain’s most important and most loved contributions to horticulture this seemed a serious oversight, and the reworking of the Great Broad Walk as perennial borders is a spectacular success both in botanical and aesthetic terms. 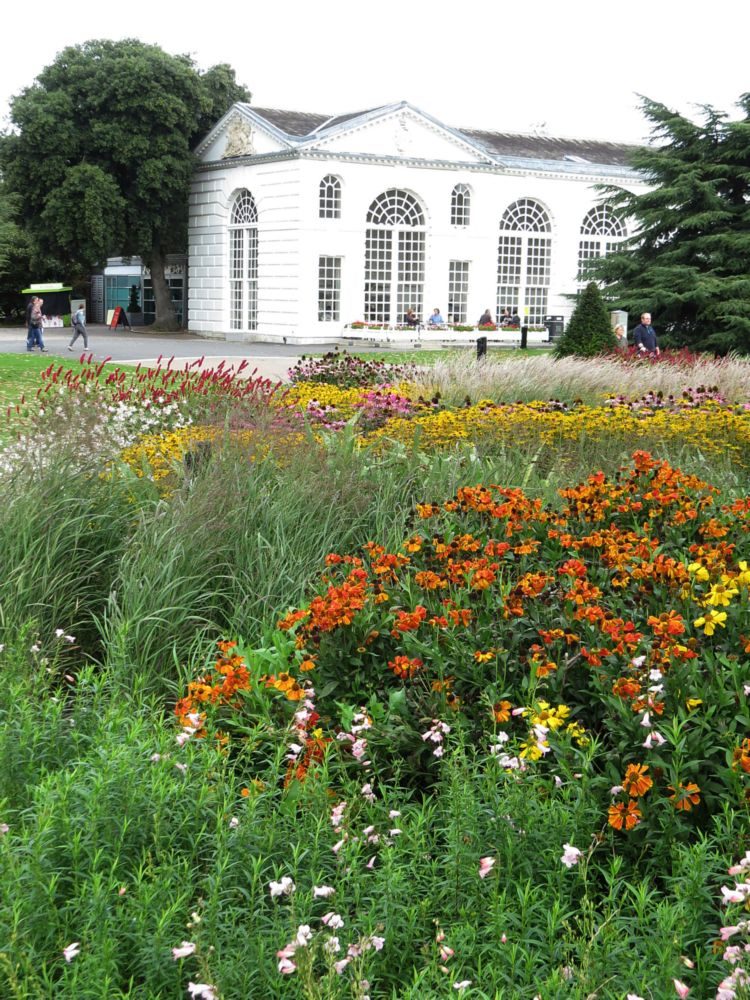 The Great Broad Walk dates back to the appointment of the first official Director of Kew, William Hooker, in 1841. He instigated major changes to the Gardens and commissioned Decimus Burton to design the Palm House and William Nesfield to landscape the grounds. A new formal avenue flanked by Cedrus deodara, linking the existing Orangery with Burton’s Palm House, was designed by Nesfield. In between the regularly-spaced cedars was a series of boomerang-shaped and oval beds planted with topiary and exuberant Victorian carpet-bedding.  As this style fell from favour, the oval beds were grassed over, and the other beds planted with rhododendrons. The Cedrus deodara were unsuited to the dry, sandy soil conditions and by 1900 many of them had died, unable to cope with the lack of water. 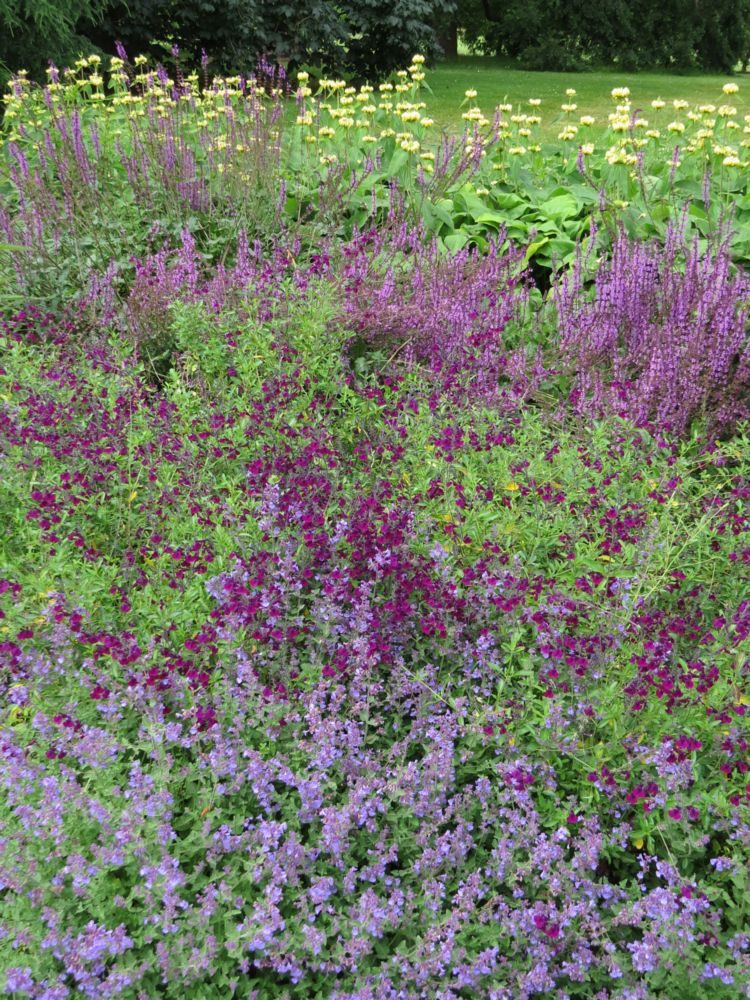 The avenue was replanted with the more drought-tolerant Cedrus atlantica in 2000, and underplanted with a vast carpet of daffodils; but the summer displays which latterly were meadow-style planting were disappointing.

The regeneration of the Great Broad Walk was long overdue, and by 2016, £1.5m had been raised from private donors and Friends of Kew; half this budget to be spent on installing drainage to rectify the flooding problem, on resurfacing and installing an overhead irrigation system. Designed by Richard Wilford, Kew’s Head of Design, the layout takes as its starting point Nesfield’s original design of a series of broad, linked beds. This is modified to form one large round bed at the north end and seven semi-circular ones all bordering on to the path. Tall yew pyramids are planted at regular intervals to each side to lead the eye forward. 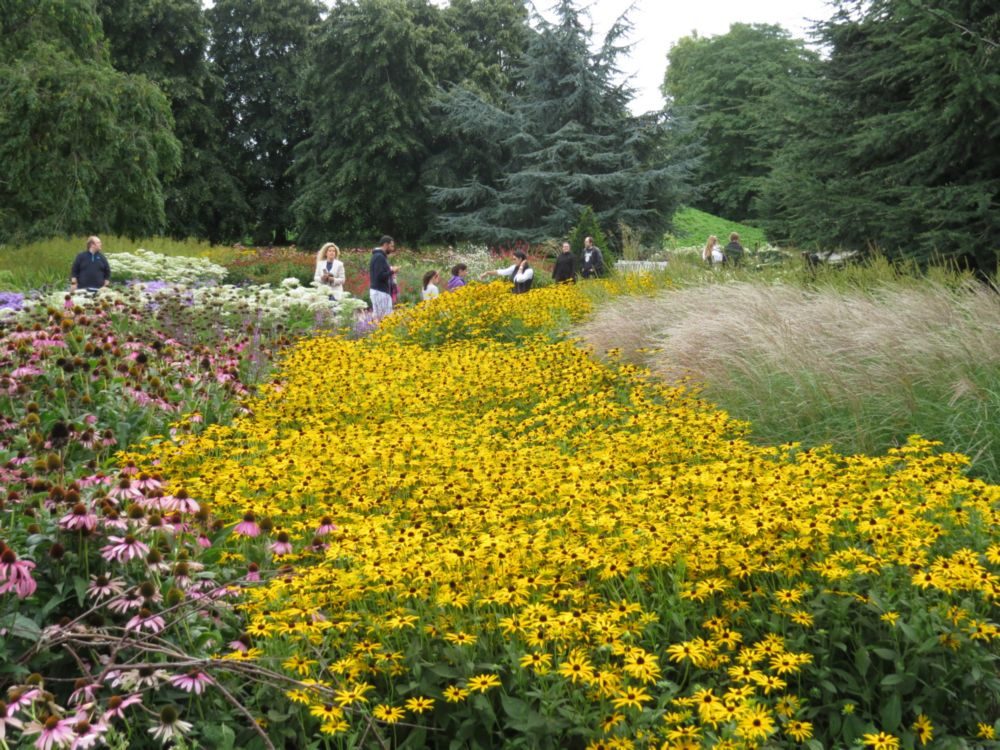 Appropriately for a botanical garden, the beds are themed, but long-flowering perennials run through all the beds to give a sense of continuity. As with all perennial borders, the planting will change with time depending on the performance of individual cultivars and the changing light levels as the cedars grow. 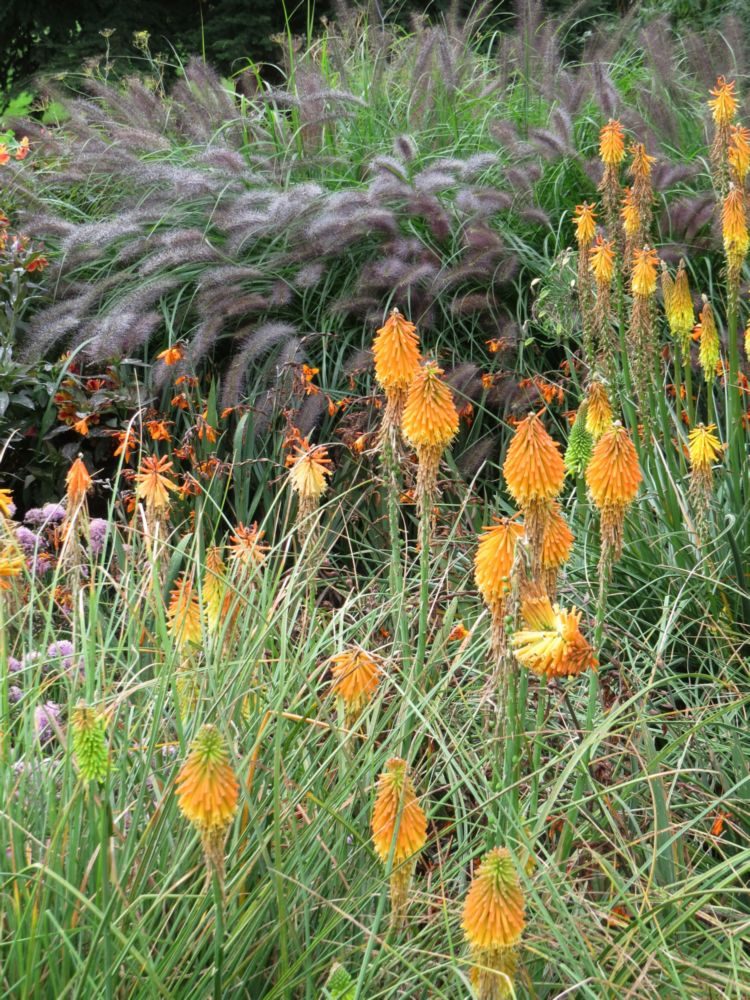 Bed 1, the large circular bed at the north end adjacent to the Orangery, is planted with long swathes and bold groups of colourful perennials proven to be good garden performers, whilst Bed 2 is members of the mint family (Lamiaceae) such as sages, lavender and catmint and is a wonderful display of blues and purples at its best in late spring and early summer. Bed 3 is the daisy family (Compositae) including helaniums, asters, and rudbeckias providing a spectacular fiery orange and yellow display in late summer. 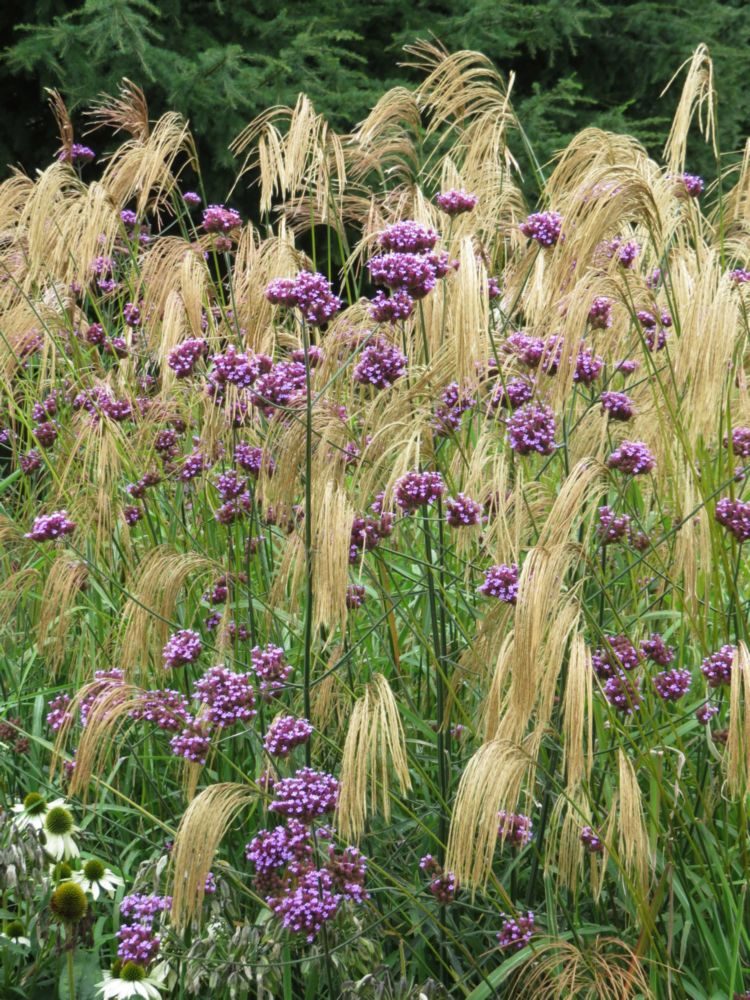 The middle section (Bed 4) includes the monocots* such as crocosmias, hemerocallis, and kniphofias, and bee-friendly plants (Beds 5 & 6) such as phlox, campanulas and verbena bonariensis, whilst at the shadier south end (Beds 7 & 8) are ferns, anenomes, foxgloves, hellebores and primulas.

Spring-flowering bulbs are planted throughout the borders, such as pale yellow and white daffodils and tulips which have mostly died back before the perennials emerge, but the seed heads of the alliums provide continuing interest into mid-summer. 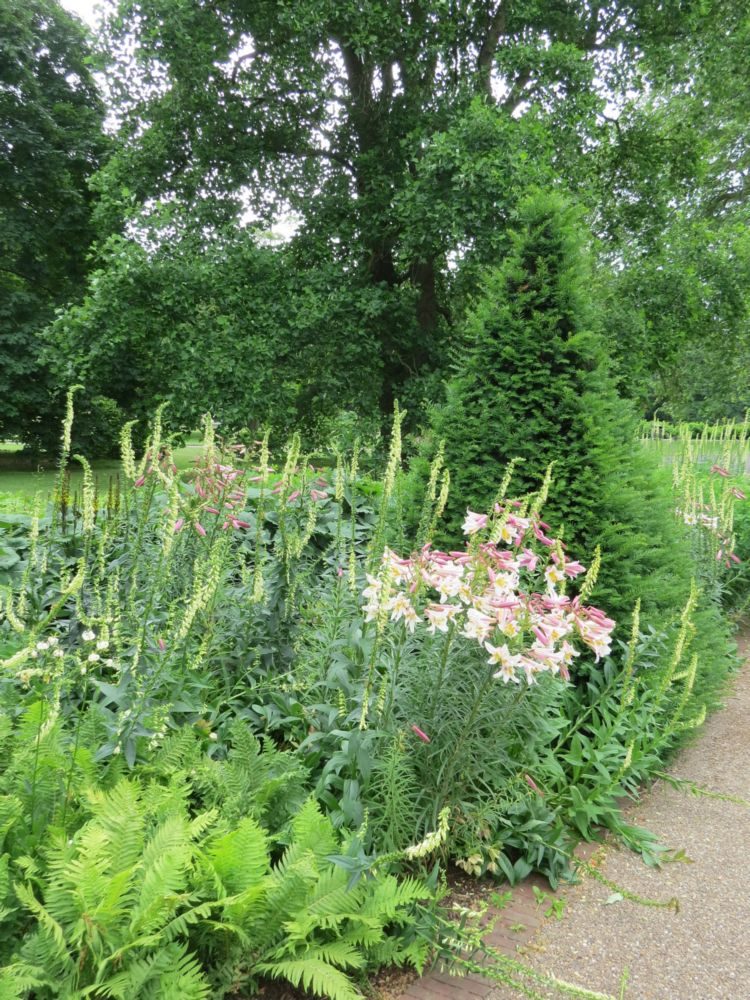 As a nation we are used to spectacular perennial borders, but the planting at Kew, unlike many perennial borders, is not to be viewed one-dimensionally against a high wall or hedge but from every direction and so the gradation from low to high found in traditional perennial borders is inappropriate. The plantings of rudbeckias and heleniums is reminiscent of prairie, whilst the long swathes of planting running through the borders is both stylish and botanically interesting.

The Great Broad Walk was formerly a disappointing feature for most of the year, but now is one of Kew’s most exciting and popular attractions setting a new benchmark against which all other perennial borders will be measured.

*Monocots (Monocotyledons) – this is a major plant category of over 67,000 species characterised by the production of a single leaf from a germinating seed (rather than a pair of leaves). The group includes grasses, sedges, orchids, lilies and bulbs and most of the main commercial crops such as wheat and rice.