For as long as I can remember, Kew’s Temperate House has been its ugly duckling. Botanical gardens have to move with the times and can no longer rely on government largesse, and therefore a great deal of effort is put into boosting visitor numbers, organising special attractions and seeking out those elusive big donors. Kew’s Temperate House was left behind because of the colossal cost of its restoration.

Built on a mound of gravel and sand excavated for the lake and sited away from the garden’s more famous attractions, construction began in 1859, the same year Darwin’s ‘On The Origin Of Species’ was first published. This enormous glasshouse was designed by Decimus Burton and the brief was that it should be less expensive to build than the iconic Palm House, also designed by him and opened in 1848. The north and south wings of the building, separated from the main glasshouse by two octagons, allow the plants to be housed according to their climatic needs.

The Temperate House suffered structural bomb damage in the Second World War and although piecemeal repairs were carried out in the 1970s the glasshouse needed a full and complete restoration. It closed in 2013 to undergo a £41 million restoration by heritage architects Donald Insall, which included updating some technical and constructional features to make the building work better. For five years the building was cocooned in a tent-like structure large enough to house three Boeing 747s.

The plants are laid out in well-defined and well-labelled biomes (plants that come from the same geographic area). The temperate region of Africa, the Americas, Australia, the Himalayas, New Zealand and Asia are well-represented, together with the many isolated islands and mountainous areas that have a temperate climate and unique plants. Europe is not included but the plants of Southern Europe can be found in Kew’s Mediterranean Garden.

Kew’s temperate collection is important, not just for its rarities but also because of habitat destruction, population growth, disease and the need to ensure food security. Many of the major food crops of the world are grown in temperate climates and Kew’s rare and diverse plants may be required to provide genetic material for new cultivars to cope with a changing climate.

Throughout the summer of 2019, the temperate botanical collection has been enlivened by a spectacular attraction, the wonderful glass sculptures of Native American artist Dale Chihuly. His work was last displayed in Britain in 2005, mostly in Kew’s iconic Palm House. The exotic flower and leaf motifs of the glass pieces have been carefully placed so as to complement the flowers and exuberant foliage of the plants.  There are also larger isolated pieces of his work placed in the gardens nearby, some of which seem strident and challenge the landscape.

It would be easy to dismiss all the attention I pay to Kew as the parochial bias of someone who lives close by, but I have seen Kew improve and evolve over the years from a somewhat dry botanical collection into something much more exciting. Its extensive provisions for children, the addition of The Hive, Xstrata Treetop Walkway and Great Boardwalk Borders have all been made possible by visionary fund-raising, and largesse from the Heritage Lottery Fund. It is probably the world’s finest botanical garden and one that is meeting challenges and needs of the 21st century. 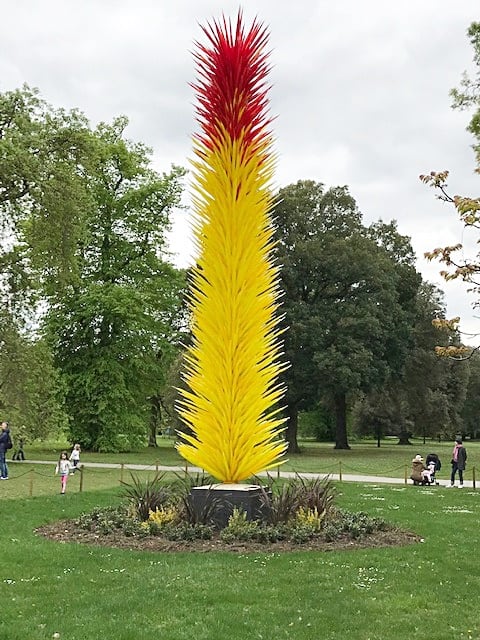