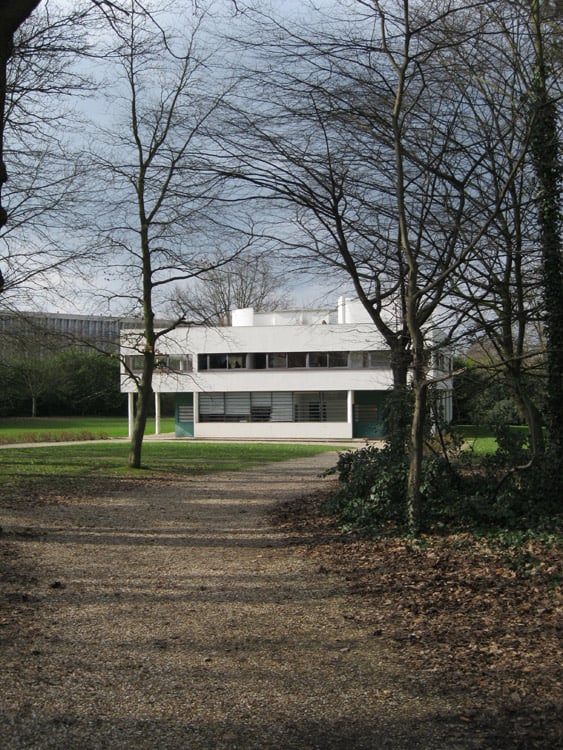 In Jacque Tati’s hilarious film ‘Playtime’, Monsieur Hulot, the buffoon hero parodies the house as a machine for living. The owners of a gadget-ridden house are baffled by its technology, which M. Hulot manages to cause to malfunction, all to the soundtrack of high heels clicking on tiled floors as the housewife saunters, walks around, and runs to answer the front door. Villa Savoye was the prototype for the house as a machine for living, with its obsession with functionalism, rationalism and minimalism. 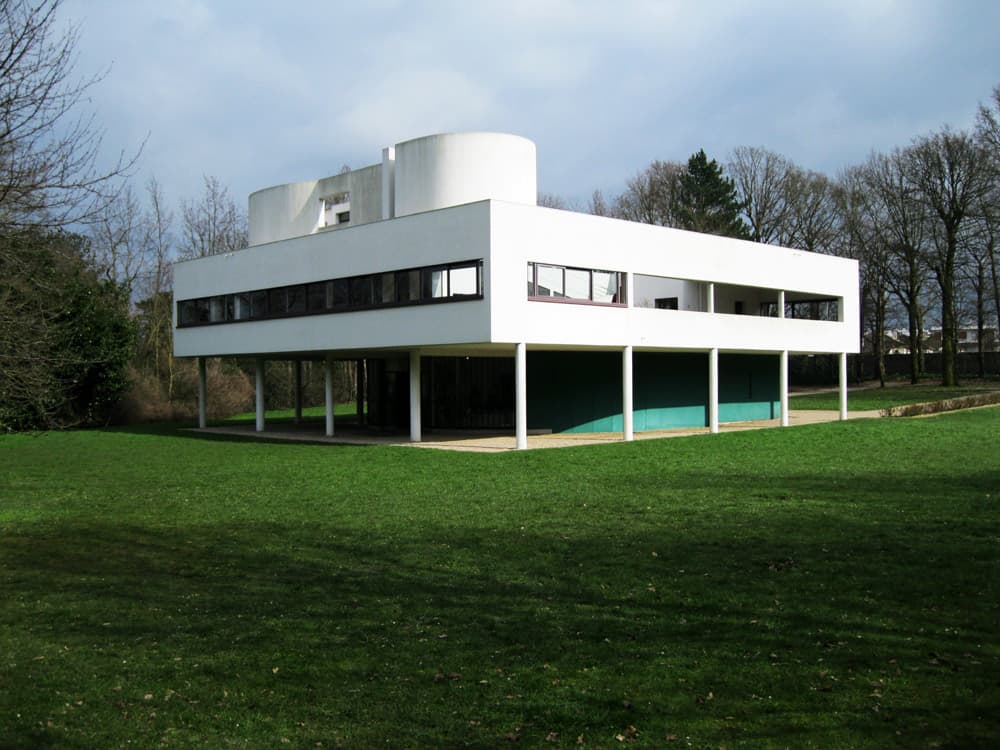 View from the south-west

Villa Savoye defied the prevailing convention of the time it was built, of the house relating to the landscape. It seemed to be a stranded alien spaceship set in an empty woodland fringed grass clearing, although as Poissy has grown, that illusion has been negated. Much as I like this great iconic building and the shock of its setting, I have never been convinced that Le Corbusier could handle outside space. His famous Ville Radieuse, a planned ideal city, has grim illustrations of nightmarish landscapes dotted with towers, and great slabs of soviet-style workers’ housing. So my visit to Villa Savoye was, in part, out of curiosity, to test my theory. 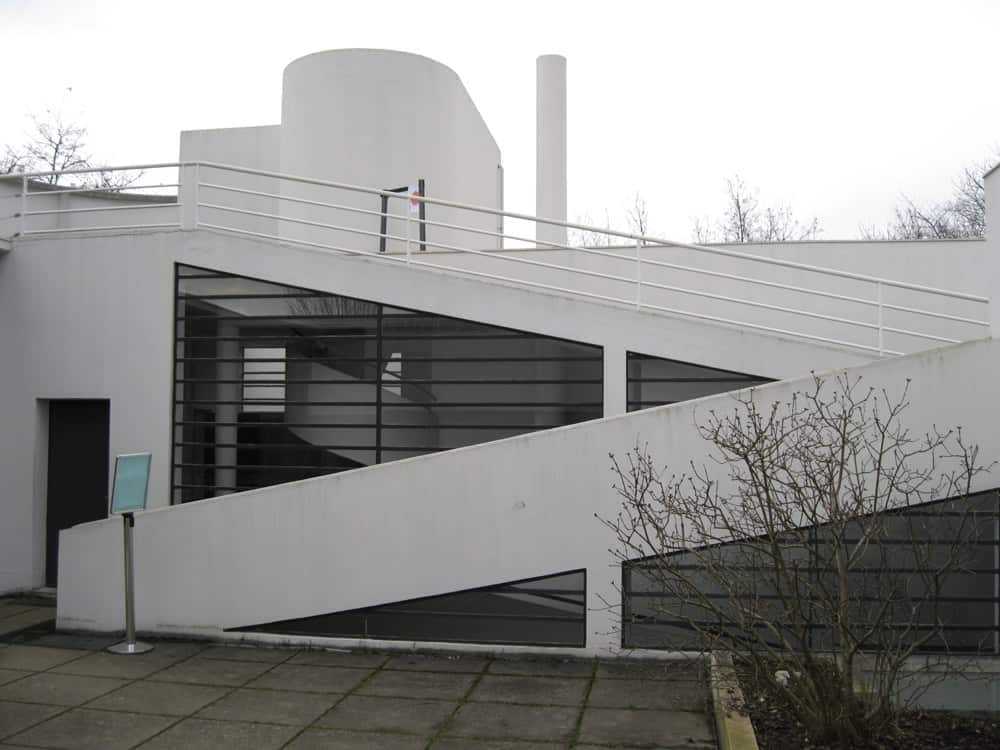 Ramp from the Salon Terrace to the Solarium Terrace

The clients, the Savoye family gave the young architect Le Corbusier an almost free hand and a large budget (although they were later to fall out over the soaring costs), and this was to prove to be the house that made Le Corbusier’s international reputation. It was to become one of the most famous and iconic buildings of the 20th century. Le Corbusier was a great theorist, author, communicator, and self-publicist, and Villa Savoye gave him the opportunity to put into practice his ‘five principles of the new architecture’; the most significant in landscaping terms being that the building should be raised on ‘pilotis’ to allow the landscape to flow underneath, (which it only partially does at Villa Savoye), and that the building’s flat roof should be an extensive roof terrace – this was something that particularly interested me. 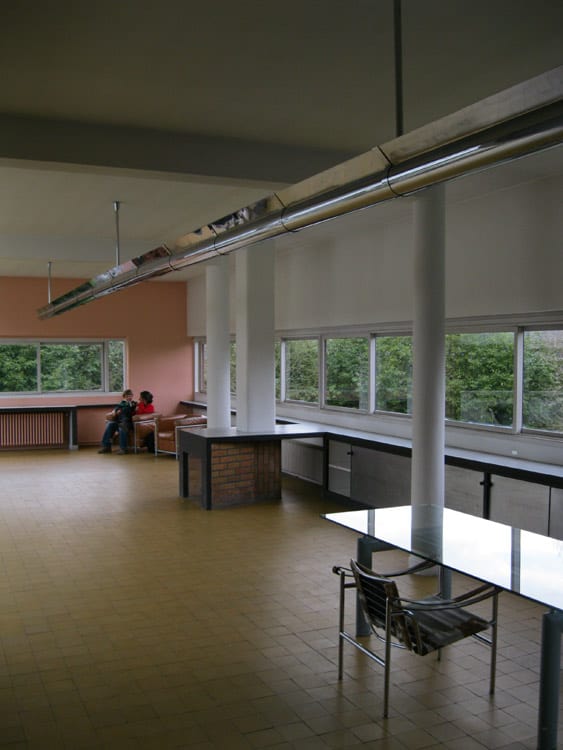 Le Corbusier was fascinated by movement through space, and the Salon Roof Terrace and the Solarium Terrace are accessed by ramps that run through the building, a very extravagant use of inside space; an artistic rather than a functional or rational decision. The enclosed Salon Terrace opens off the large, light, airy and shockingly modern first floor Salon, and has the feel of an upper deck of an ocean liner, and an external ramp leads up to the Solarium Terrace with its curved sculptural walls and liner-styled funnels. 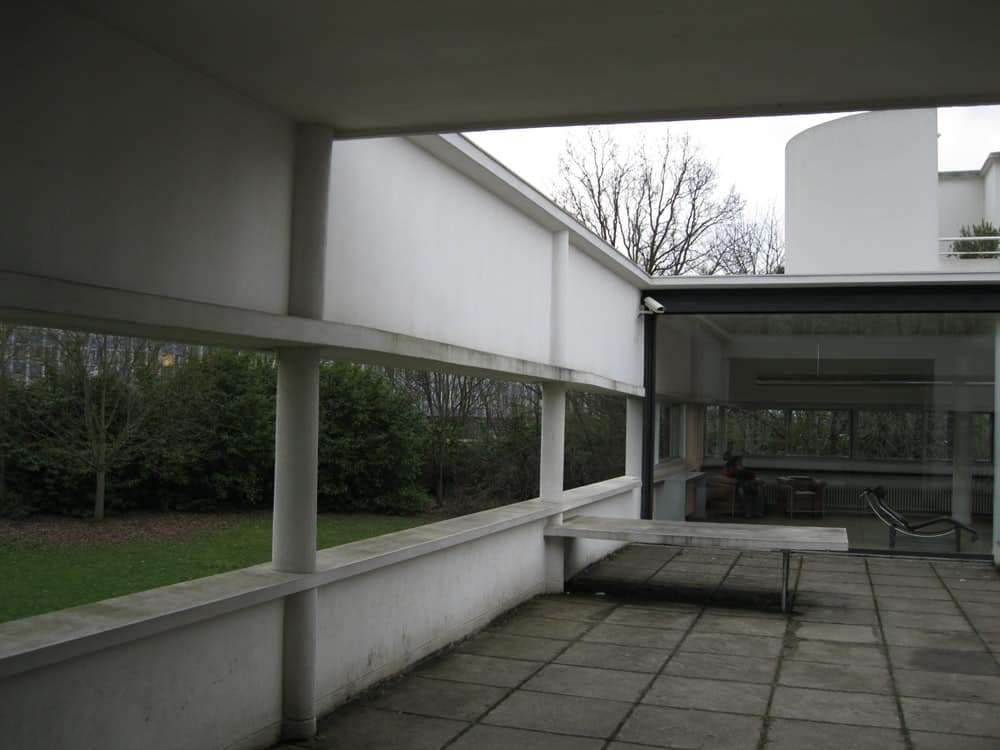 Now, and in earlier photographs, both the planting beds and the planting seem timid and self-conscious, more like outside house plants. I was hoping for a contrast to the grass clearing of the external landscape, something bold but related to the human scale; but I suppose this was not Le Corbusier’s vision of a machine age. (Interestingly at a similar time, Mies van der Rohe masterfully achieved this effect at the Barcelona Pavilion). 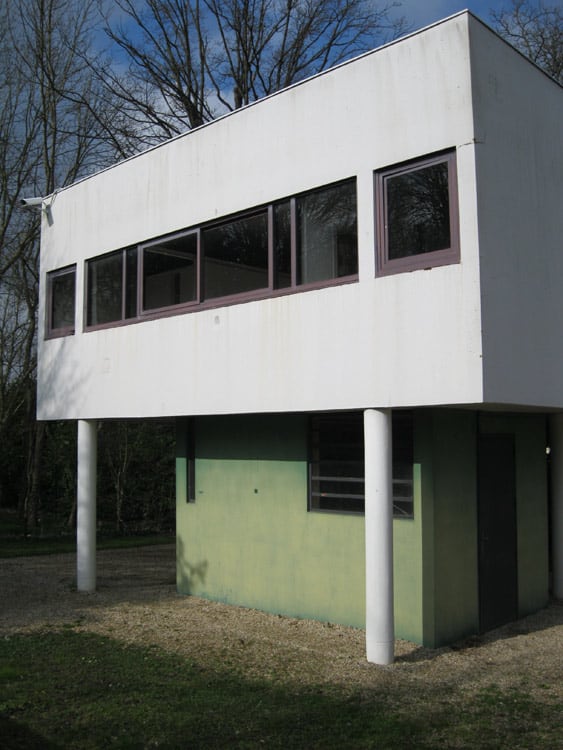 Villa Savoye is a beautiful and challenging building, much loved by architectural students. I came away slightly disappointed by its inconsistencies, the poor maintenance of building and planting, and thinking that there probably is some truth to my theory, which I had hoped to disprove. After such a long pilgrimage out of Paris, I would have appreciated the diminutive abandoned caretaker’s house, built in the same style, being converted into a much-needed cafe. We English need our tea.