Late February and early March is the time to see winter gardens at their best, but a couple of sad borders of garish heathers, a bit of forsythia, a few camellias, and a sea of early daffodils don’t make a winter garden. So often I am left feeling angry and frustrated. I can understand why many gardens open to the public all year feel the need to set an area aside as a ‘Winter Garden’; an attempt to give their garden all year round appeal. None have the panache, the size, or the successful companion planting of Anglesey Abbey. Not a heather, forsythia or camellia in sight, but an astonishing thirteen page list of over 160 skilfully chosen plants. 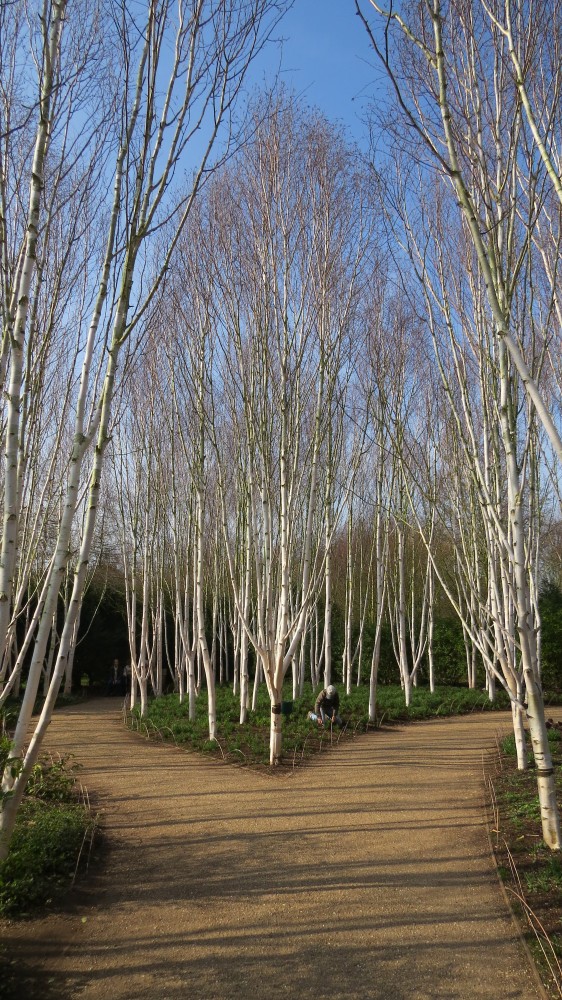 What is even more surprising is that the National Trust, renowned more for garden conservation than for cutting edge creativity commissioned this garden in 1998 to commemorate the centenary of the birth of Lord Fairhaven, who donated house and garden to the Trust. Anglesey Abbey has other gardens that shine throughout the year; for instance its Herbaceous Garden, Rose Garden and Dahlia Garden, but England is full of wonderful gardens and my enthusiasm is for writing about gardens that have a unique and inspiring quality. 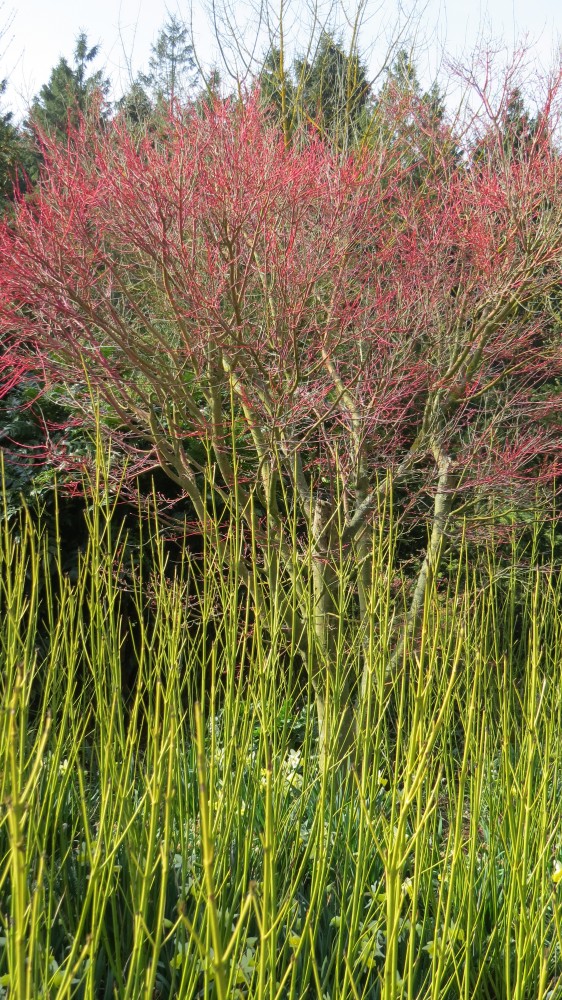 Anglesey Abbey’s Winter Garden succeeds where others fail firstly because it is a narrow tightly contained area enclosed by high shrubs and smallish trees, whereas many other winter gardens dissolve and dissipate into the surrounding areas.  A broad meandering path encourages a slow gentle stroll, and pockets of space open up to each side forcing you to look carefully at well-conceived plant combinations and individual plants rather than the overall effect. The exception is a glade of stunning Himalayan birch (Betula utilis var. jaquemontii) whose power-washed gleaming white stems make a breathtakingly beautiful finale; a ghostly white cathedral. 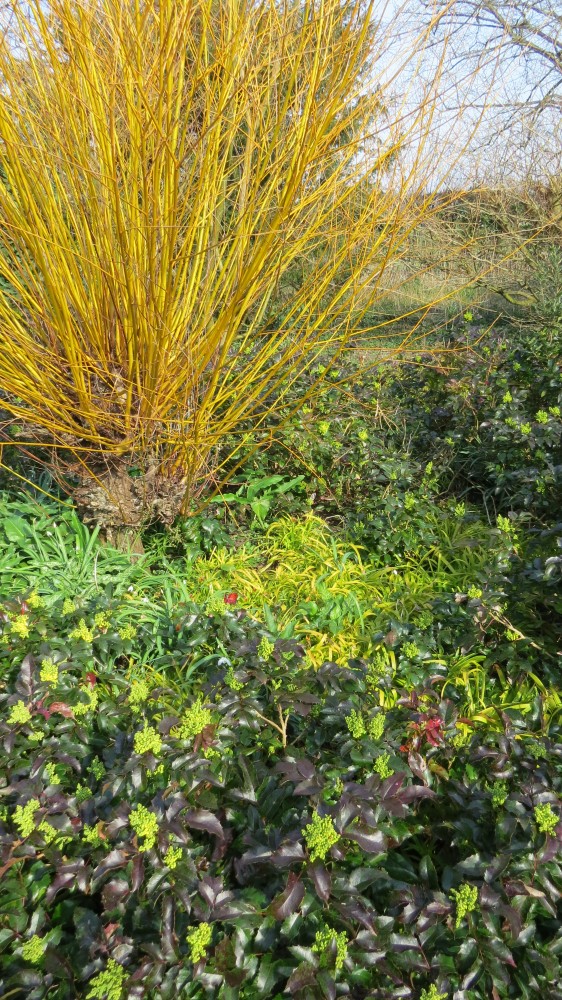 I greatly appreciate the planting because it is informal, unusual and imaginative – for instance there is a large block of Green barked dogwood (Cornus ‘Flaviramea’), their upright lime green stems interplanted with soft yellow narcissus; the structure to the composition being provided by a Coral-barked maple (Acer ‘Sango-kaku’).

Great use is made of ground cover, often in startling combinations, such as grassy Carex ‘Evergold’ planted en masse beside a large clump of low-growing Mahonia  ‘Apollo’ with its burnished copper leaves and beefed-up with Golden willow (Salix ‘Vitellina’). Show-stoppers such as the curved bank of Cornus ‘Winter Beauty’ with its violent red, orange and yellow stems provide a sense of theatre that draws you on. 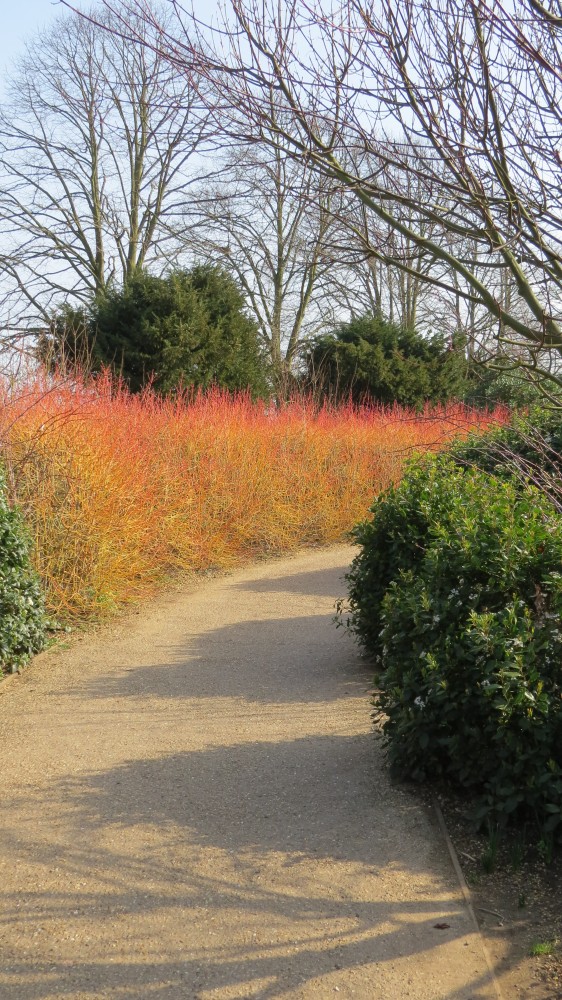 Anglesey Abbey is renowned for its collection of over 240 varieties of snowdrops, laid out in large drifts (many to be found along the Woodland Path), making their first appearances in January, but by late February the bulbs in the Winter Garden burst into life with big block plantings of numerous varieties of crocus, daffodils, cyclamen and iris. 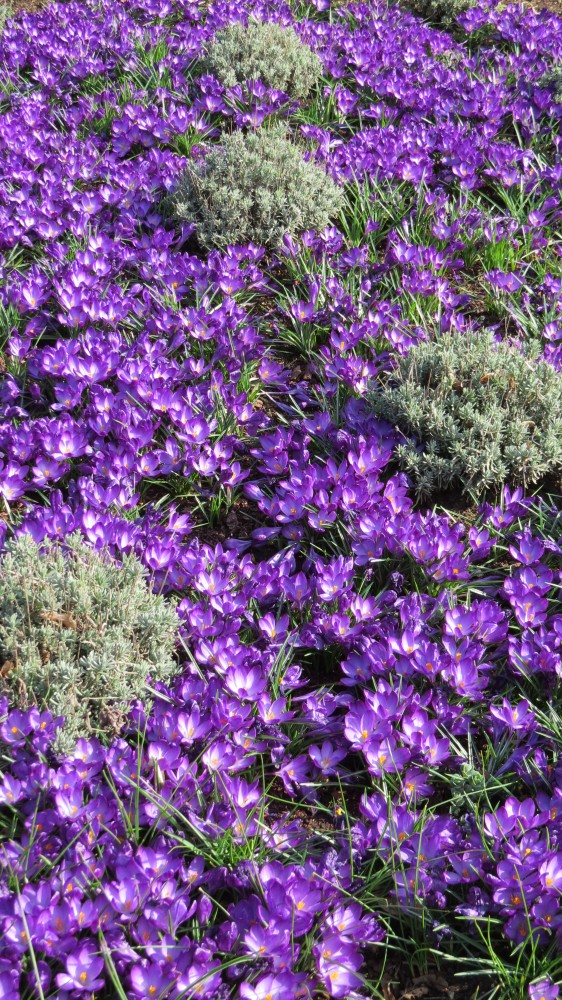 This is a garden for the senses, with a succession of strong scents from mahonias, winter flowering honeysuckle, sarcococca, and viburnums. The sense of touch is encouraged by placing acers renowned for their beautiful bark, such as the the Paperbark Maple (Acer griseum) and the Snake-bark maple (Acer termontosum) close to the path. 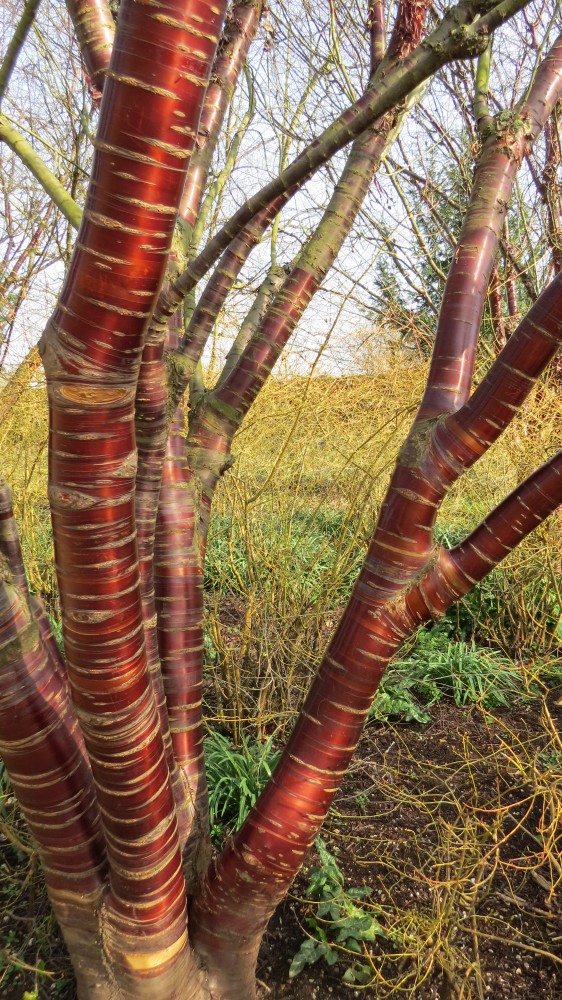 Our climate is such that we have four seasons of almost equal length, and Anglesey Abbey’s Winter Garden demonstrates how with great skill and imagination a garden can be created to brighten up even our gloomiest months. It is a garden not to be missed, particularly if like many of the visitors, you have a mobility scooter.