The camera can lie. Visiting gardens is not the straight-forward business it would seem to be, and I don’t like to think of the number of wasted days I have had travelling full of anticipation to see some second-rate garden that has been beautifully and seductively photographed. But the upside is that occasionally there is something delightful overlooked by the media herd.

Buscot is a case in point, its delights being the enlightened and slightly funky stewardship of the Faringdon family and the superbly planted mixed borders of its Walled Garden and Parents’ Walk, its slight disappointment being the world-famous Peto Water Garden. 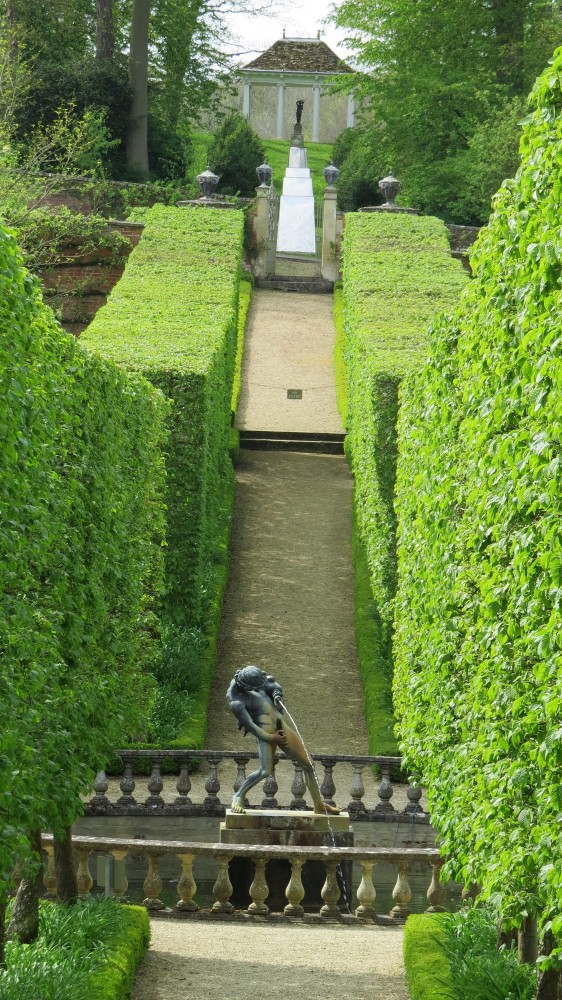 The Hornbeam Allee to the Four Seasons Walled Garden

I do like my cheese scones, and after a long journey to visit a garden the first stop is the tea-room. Buscot’s Tea-Room is something of a mind-blowing experience, the high walls of the converted stable block being covered in Veronese-style murals of the current Lord Faringdon and his family enlivened with symbolic and surreal associations. This sets the tone for Buscot, Lord Farringdon’s mission being ‘to breathe life into a property’. This quest also spills out into the garden, with varying degrees of success.

Buscot was bequeathed to the National Trust in 1956 by the 2nd Lord Faringdon, a controversial and politically provocative leftie, pacifist, friend of artists, poets and painters who had given shelter to Basque and Spanish exiles at the start of the Spanish Civil War. 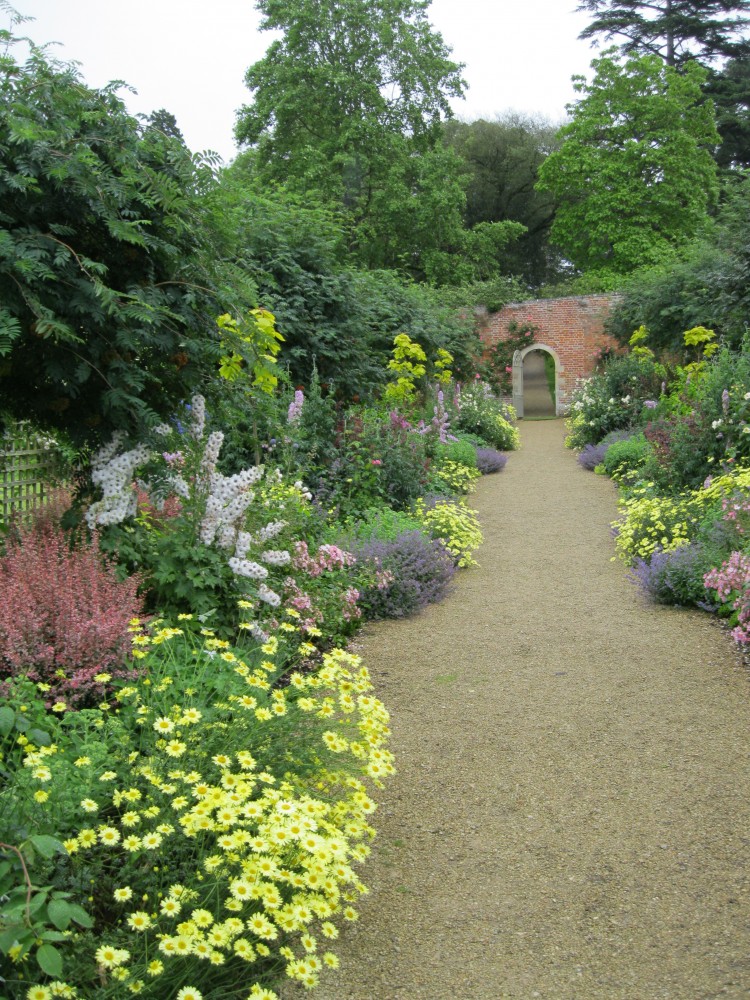 Summer Planting to The Parent’s Walk

The house and grounds were then leased back to the family on favourable terms, and the future of its endowed and eclectic contents, the superb Farringdon Collection secured. His nephew, the current Lord Farringdon inherited Buscot at an early age moving there in 1977, and a year later set about converting the octagon-shaped walled garden into a garden for the four seasons with a strong axial structure of pleached hornbeams, under-planted with long beds of alliums and day lilies, and with clipped weeping pears placed in the four quadrants. Unusually for a walled garden it spreads up the sides of a steep valley. 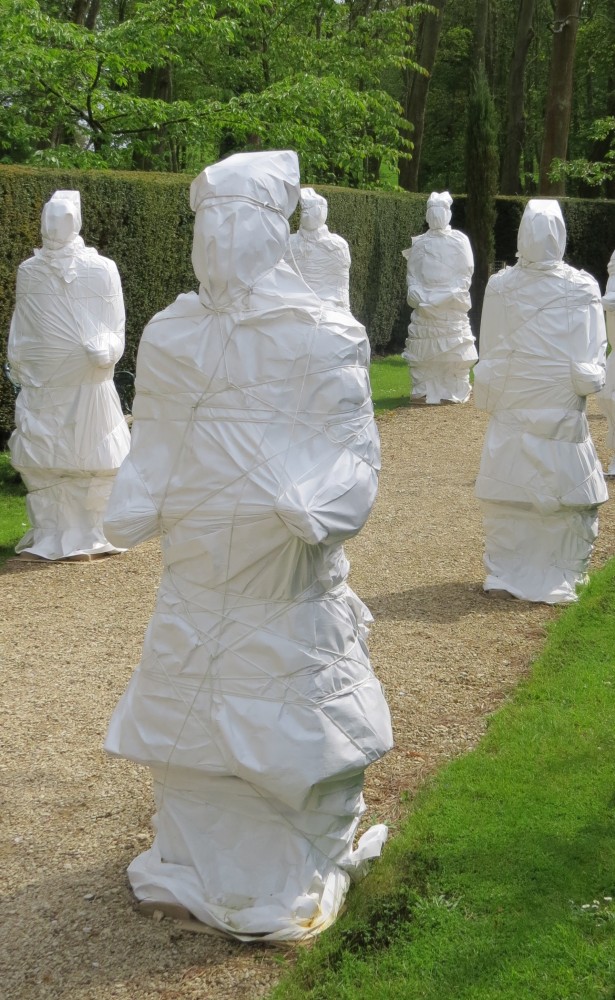 The great British tradition of the mixed border skilfully planted with a succession of flowering perennials shrubs and climbers has unfortunately fallen out of fashion but both the Four Seasons Walled Garden, and adjacent Parents’ Walk at Buscot prove that this does not have to be an historical style.

In the Parents’ Garden in spring, the startling association of yellow-leaved philadelphus and catalpa aurea, with the lime-green flowers of euphorbia wulfenii, and the deep reds of berberis and cotinus is very much after my own taste. The long season of foliage interest, provides background structure for the transient appearance of bulbs and soft yellow and purple perennials. 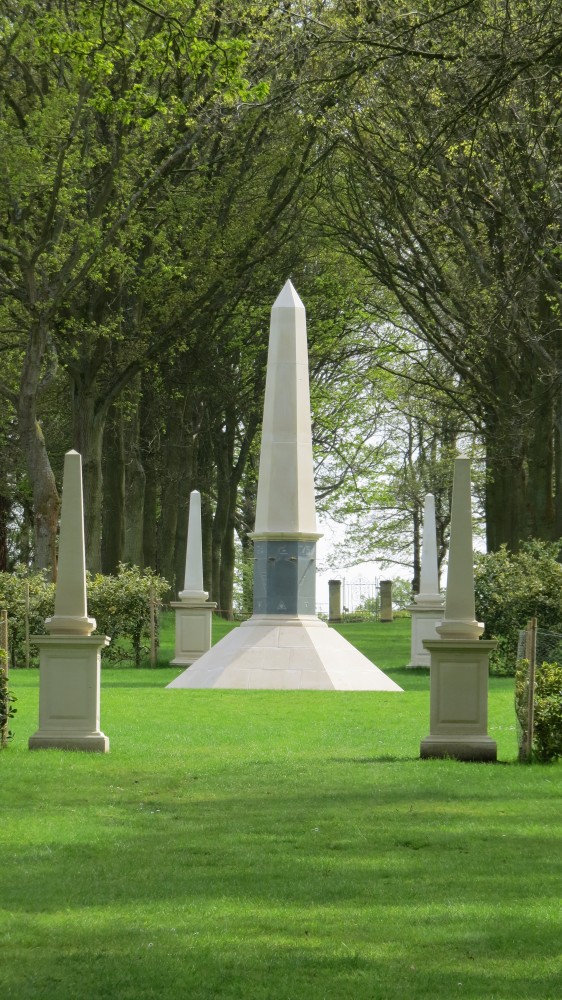 From here, the influence of the early 20th century garden designer, Harold Peto is increasingly apparent as you move to other garden areas. A straight ascending formal walk, passes the Terracotta Army (surreally wrapped like Christo installations on my spring visit) and opens out on to to broad lawns of the South Front of an unassuming Georgian mansion. From the east side of the house six formal avenues radiate like spokes of a wheel through woodland with small roundel gardens and pass on to the countryside beyond. It is on one of these avenues that the Peto Water Garden is to be found. 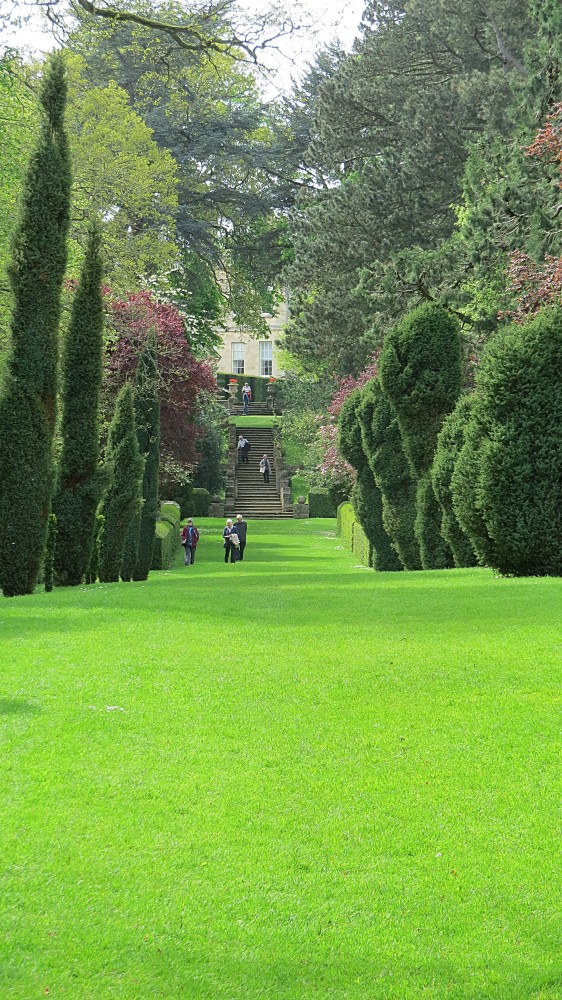 The Approach to the Water Garden

Sir Harold Peto trained as an architect (at one time working in the same practice as Edwin Lutyens), but was strongly influenced by the gardens of the Italian Renaissance, and the time he spent in Italy. His intention at Buscot was to link the house built on the top of a hill, with the Big Lake by a series of pools, rills and cascades, falling down the hillside. The vista was closed by the small classical temple that Peto built on the opposite side of the lake. 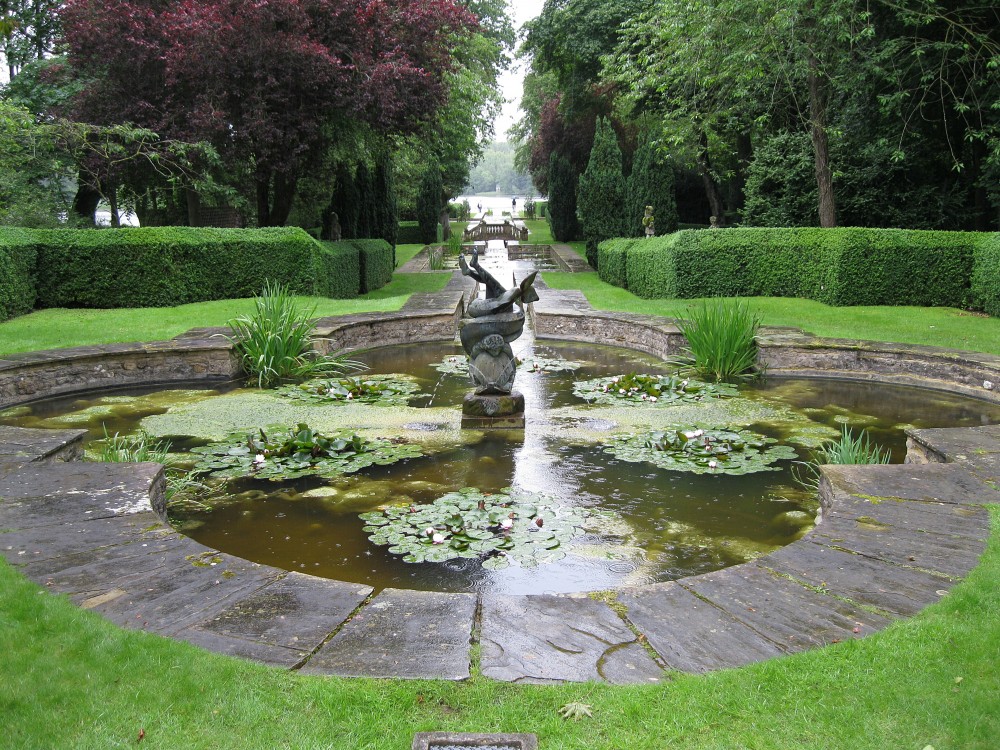 But I think it is telling that the Water Garden built in 1904, was extended between 1911 and 1913. The problem I have with the Water Garden is that it doesn’t really do what it was supposed to do – provide that classical link between house and lake. They are simply too far apart. The scale of the water garden is too small for this long claustrophobically narrow corridor of space set between the mature forest trees of the enclosing woodland. After all those seductive photographs, the first impressions from a distance are of disappointment. 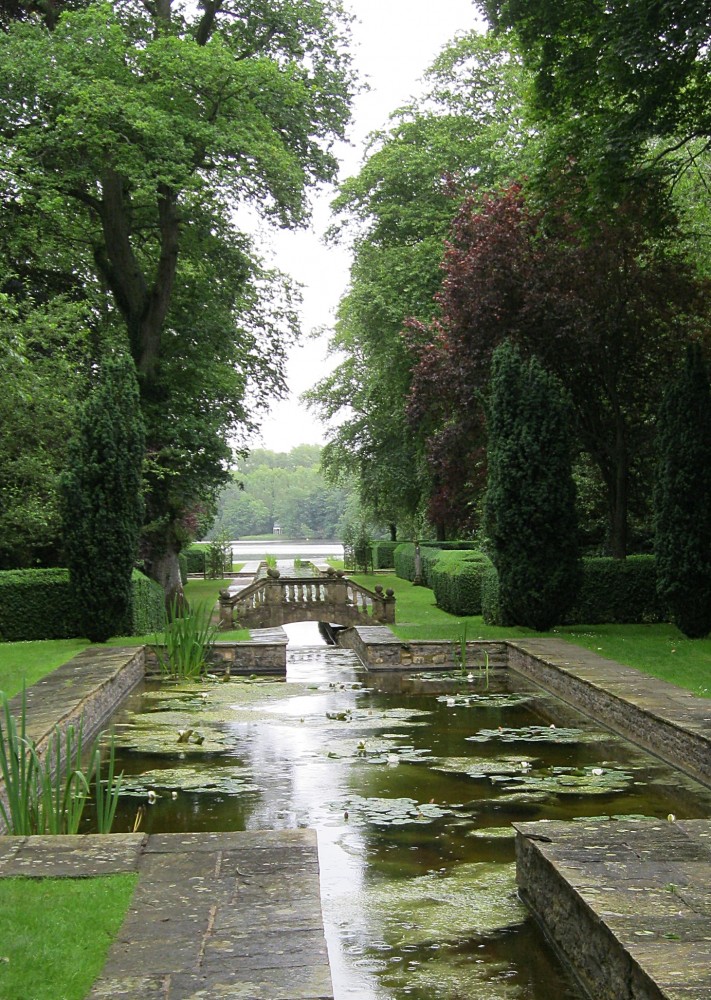 Barely visible from the top of a steeply descending avenue I cannot help feel that there should be a stronger formal rhythm of topiary and sculptures on the approach to the Water Garden to build anticipation, or that it should have been much larger. That said, when once reached the Water Garden itself is superb, a delightful play on intimate space and on the reflective qualities of water, harkening back to that great Italian Renaissance garden tradition.

Faringdon’s brave mission is ‘to spare the public the depressing uniformity and bloodless feeling of so many properties’ and it is to the National Trust’s credit that he has been given something of a free hand, even if to my mind the new garden areas, such as the strange Diamond Jubilee Garden aren’t always a success. Buscot’s very personal touch, its quirky murals, superb planting of the Four Seasons Walled Garden and Parent’s Walk, and the intimacy of the Water Garden make up for its disappointments.