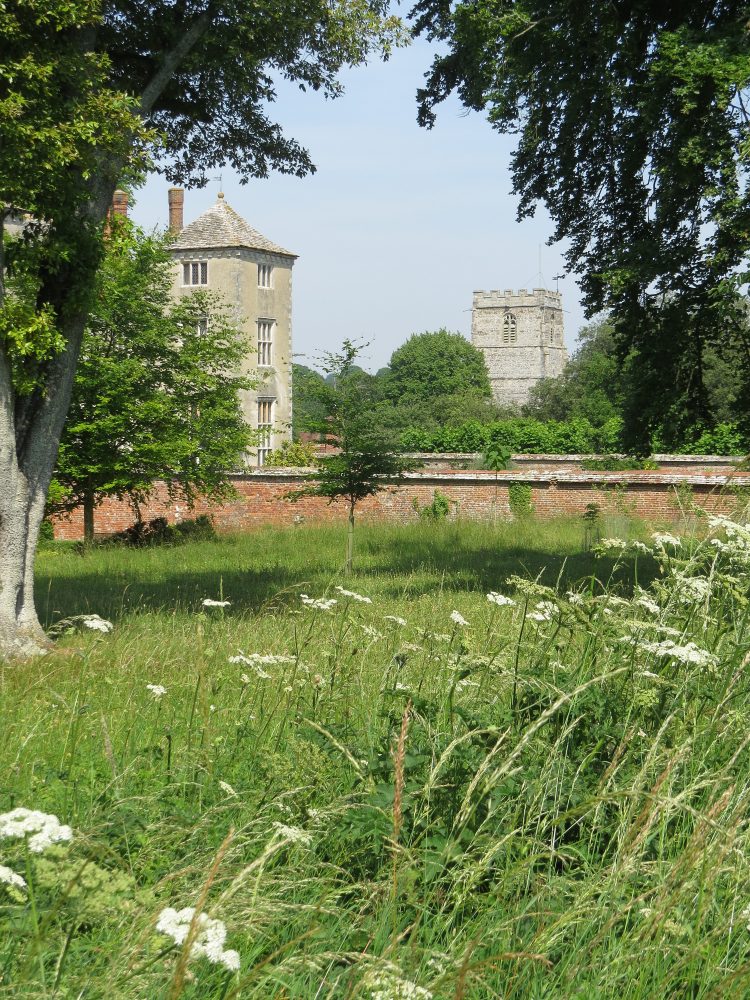 You would never guess from surfing the internet or glancing through travel guide books that Cranborne Manor Garden was one of England’s great gardens. Hidden in the depths of the Dorset countryside, it is only open Wednesdays in summer and approached through a modest Alice-in-Wonderland gate from the large (although stylish) garden centre, with its café, shop and new events venue.

This little visited and little written about private garden doesn’t try too hard. It is not a showpiece, but something well-thought out with the homely charms of an English country garden. The sense of place is perfect. 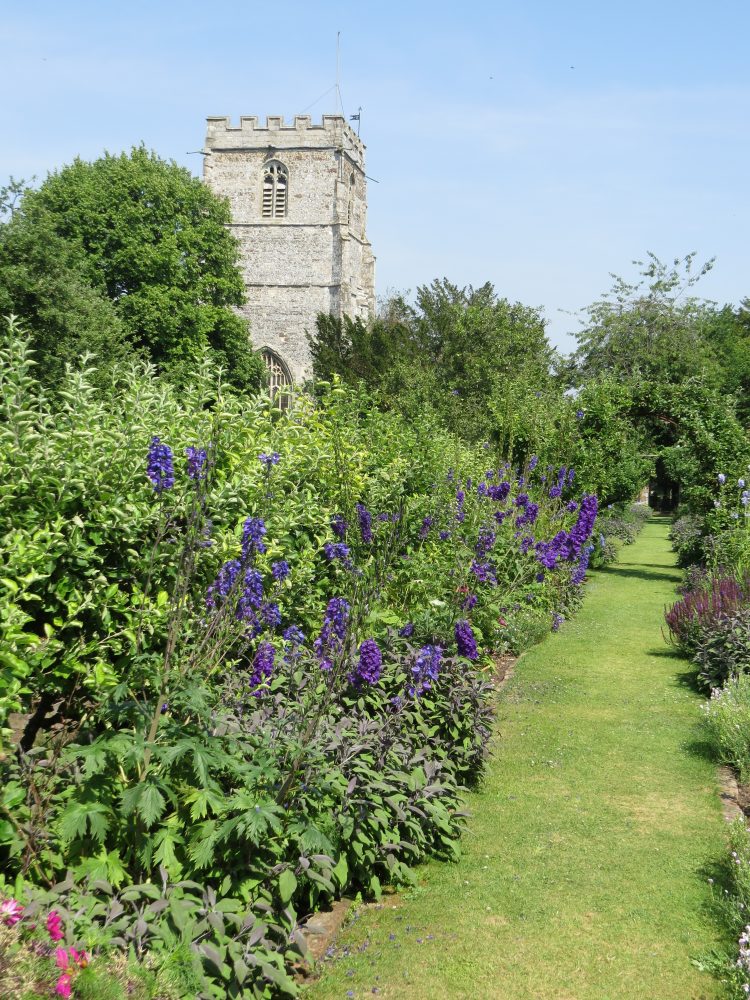 What excites me most about Cranbrook are the ‘borrowed views’. These are elements from outside a garden that are incorporated into it allowing the eye to focus on something pleasant and calming in the distance, and making a garden seem larger and more tranquil. Cranbrook abounds with borrowed views particularly the omnipresent church tower and the tower of the manor house. 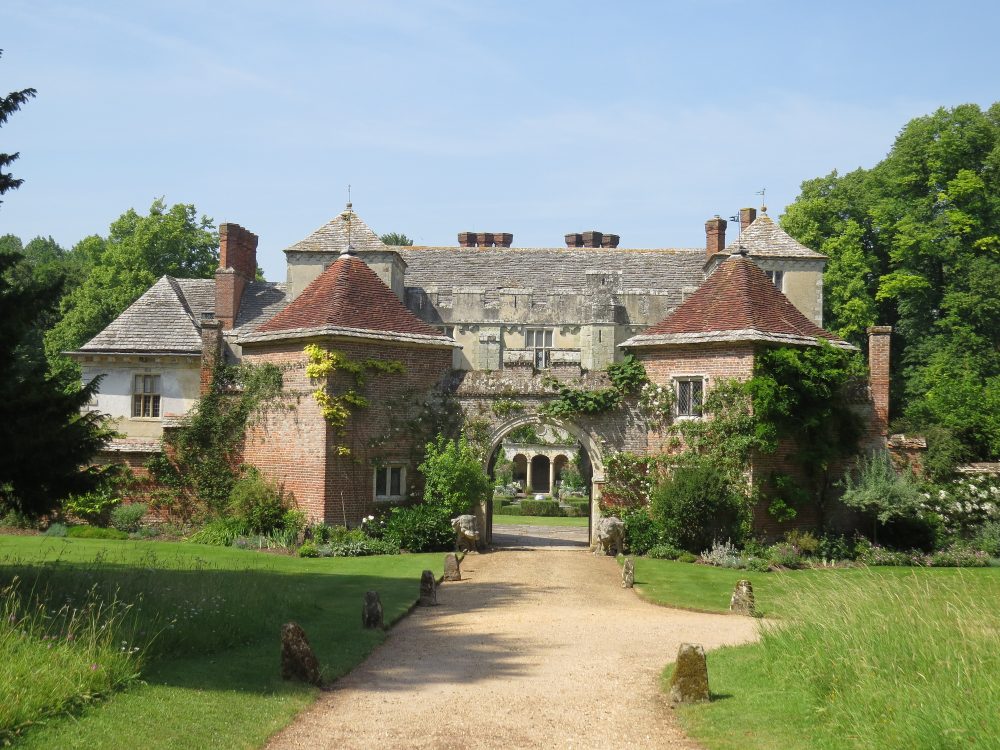 The Gatehouses, Courtyard and Manor House

The manor house is a small and rare survival, a royal 13th century ashlar-faced rubble and flint building given by James I to Robert Cecil for easing his accession to the English crown. Cecil’s 17th century additions included the distinctive tower and the two brick Jacobean gatehouses that enclose the brick and stone paved entrance courtyard. As at Cecil’s grand palace, Hatfield House, the formal garden was laid out by John Tradescant. After years of neglect Cranbrook’s garden was given a fashionable Arts and Crafts makeover in the early 20th century, but retained Tradescant’s massive and slightly oppressive yew hedged Bowling Allee.

Cranborne’s period of greatness dates from 1948 when the indomitable, determined and independent-minded Mollie, Viscountess Cranborne, took over. Over the next 24 years she transformed the garden into something unique and special. Later, on the death of her husband’s father, as Lady Salisbury she remodelled the gardens at Hatfield House known now for its world-class formal parterres and fantastical topiary.

Often found on her knees in the borders at Cranborne, this talented and self-taught garden designer was a no-nonsense advocate of organic gardening and ecological management when it was considered to be the realm of cranks. Famously, when asked about Prince Charles’s conversations with plants she relied ‘Well, doesn’t everyone?’ 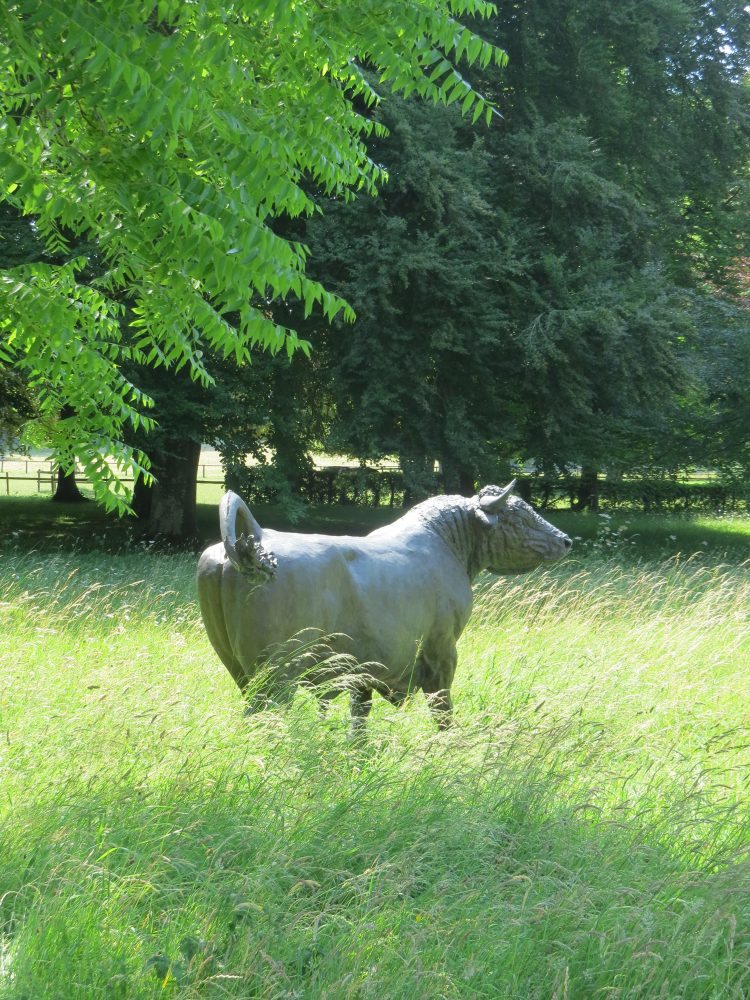 Upon passing through the entrance gate, the walled Vegetable Garden is disarmingly modest, with its polythene tunnels, fruit cage, glass houses, gnarled espaliered apple trees underplanted with chives and a cross of wildflowers defined in the turf. This is a working garden providing produce for family and café, and not a pretentious potager with carefully colour-coordinated lollo rosso, ruby-red chard and radicchio. Leaving the garden you are confronted by the marvellous life-size bronze bull ‘Druid’, set in the uncut grass amidst ox-eye daisies and wild orchids, Druid acts as something of a full stop with gardens to left and right. 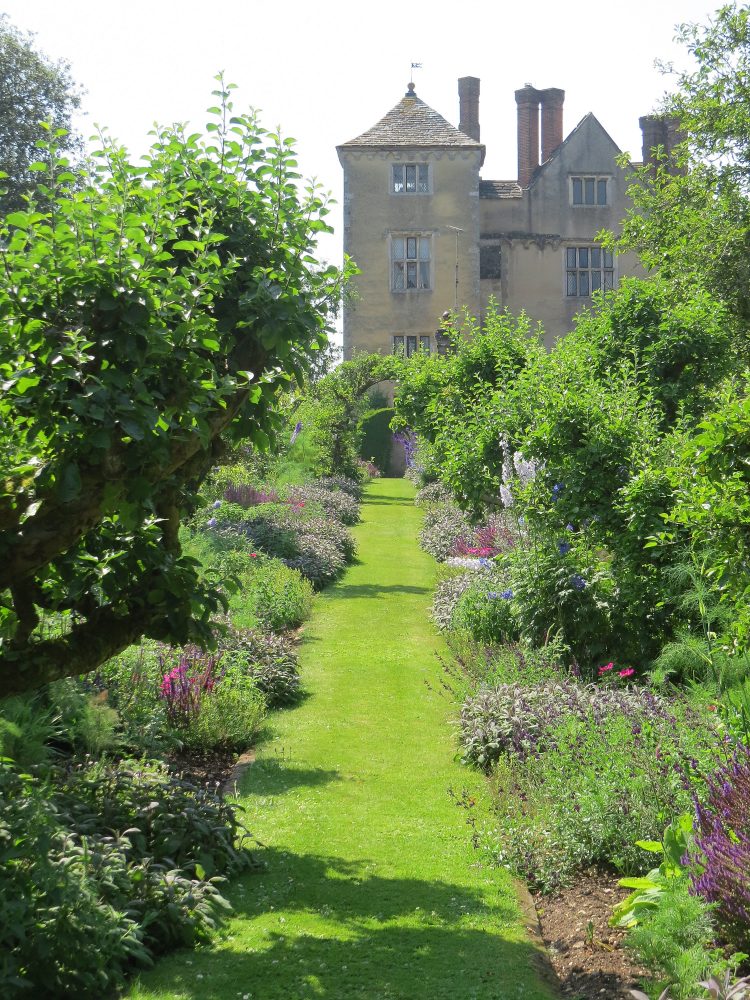 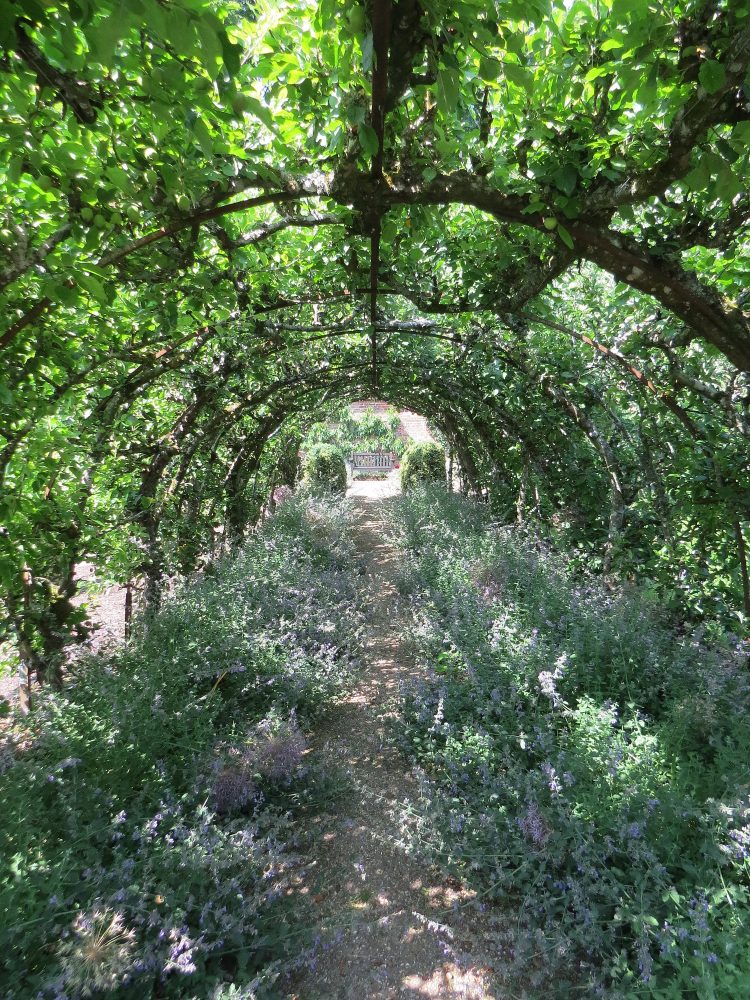 The ensuing garden rooms are intimate and varied with a seasonal succession of good planting such as the alliums, salvias, artichokes and delphiniums in the Church Walk coinciding with my June visit. The old espaliered apple tunnel in the adjacent Kitchen Garden was under-planted with fading alliums and nepeta. Everywhere in the gardens can be seen the comforting borrowed view of the manor house and church towers unobscured by high trees. 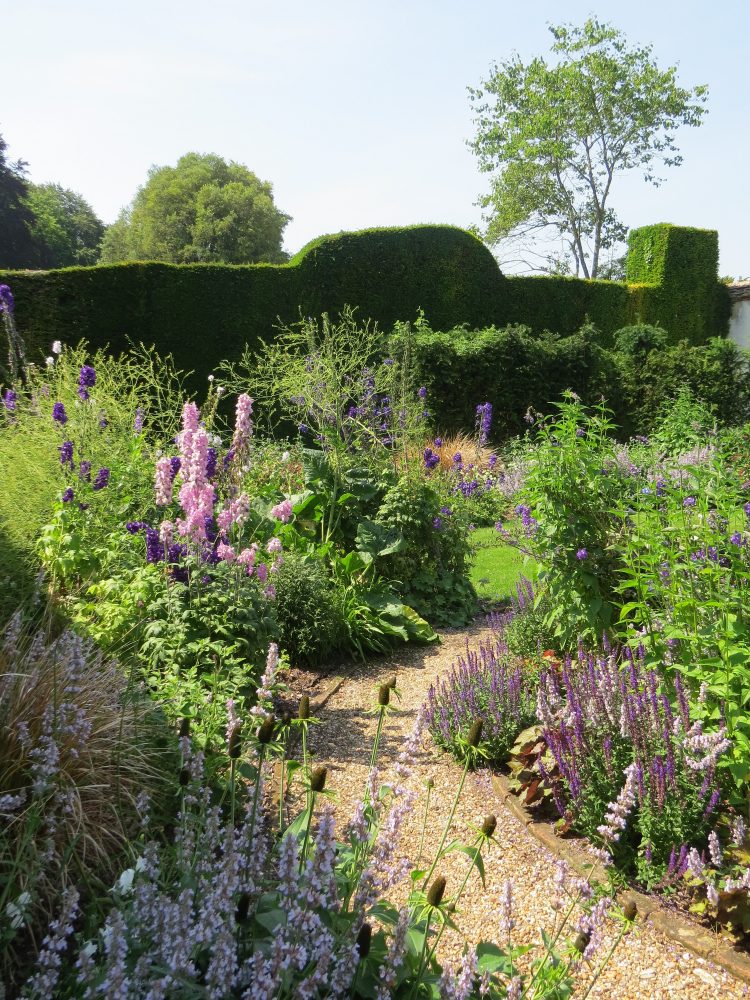 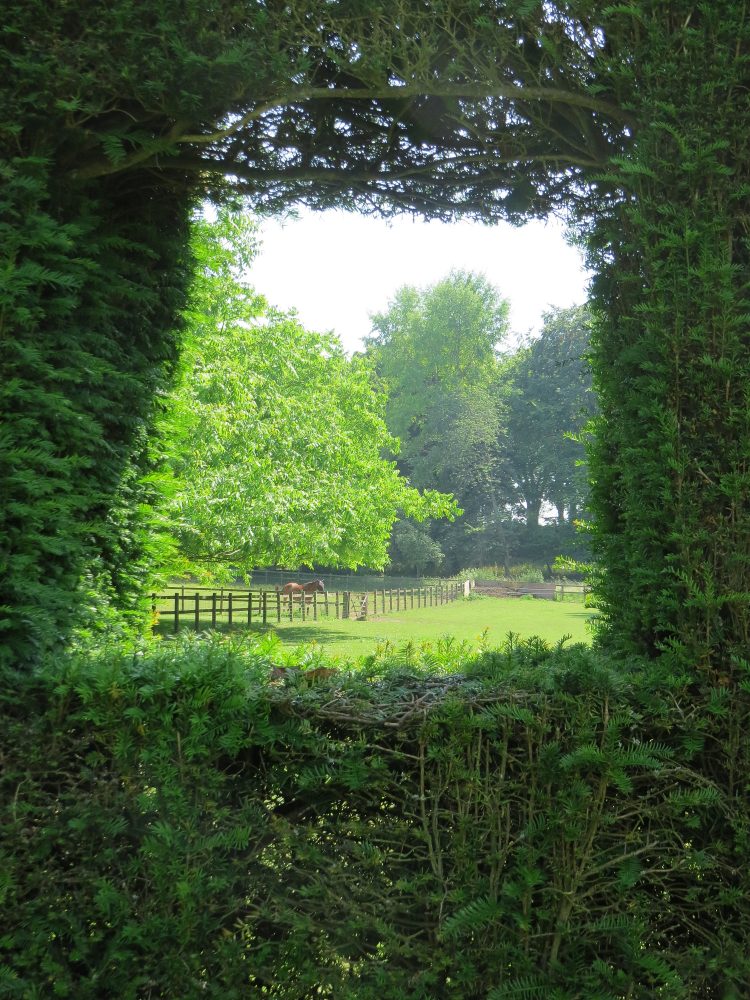 Borrowed View through the Yew Hedge

In addition to the two towers there are other fine borrowed views outside the garden, for example in the Chalk Walk and Cottage Garden. These two gardens have a high wavy yew hedge along their southern boundary where eight small square windows have been cut offering glimpses of horses quietly grazing in the field behind. 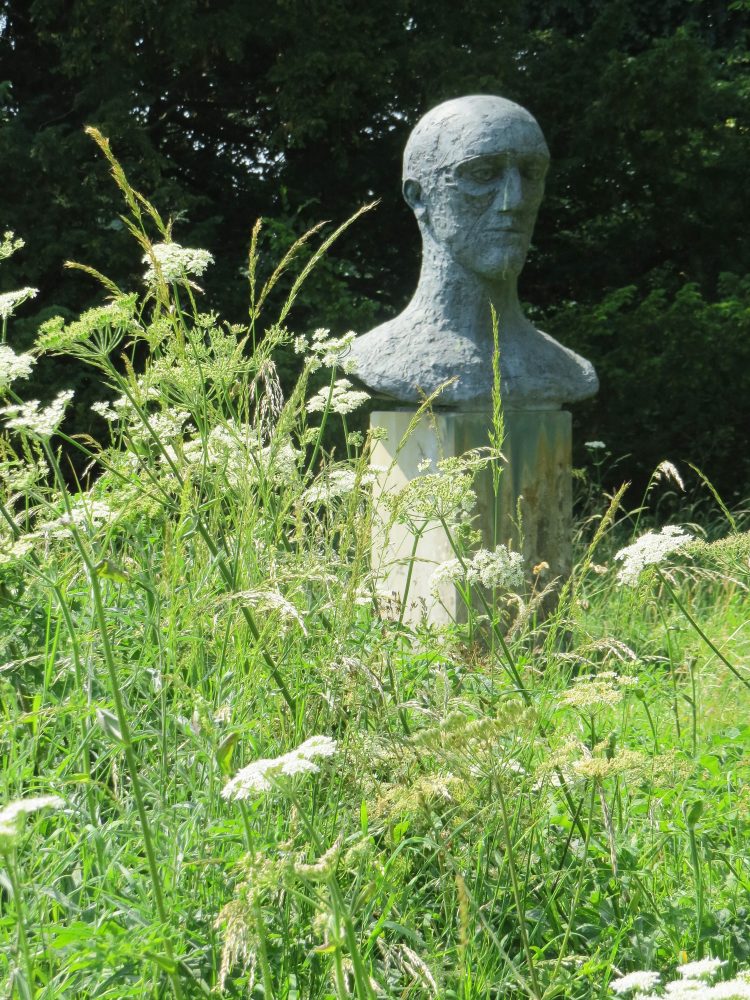 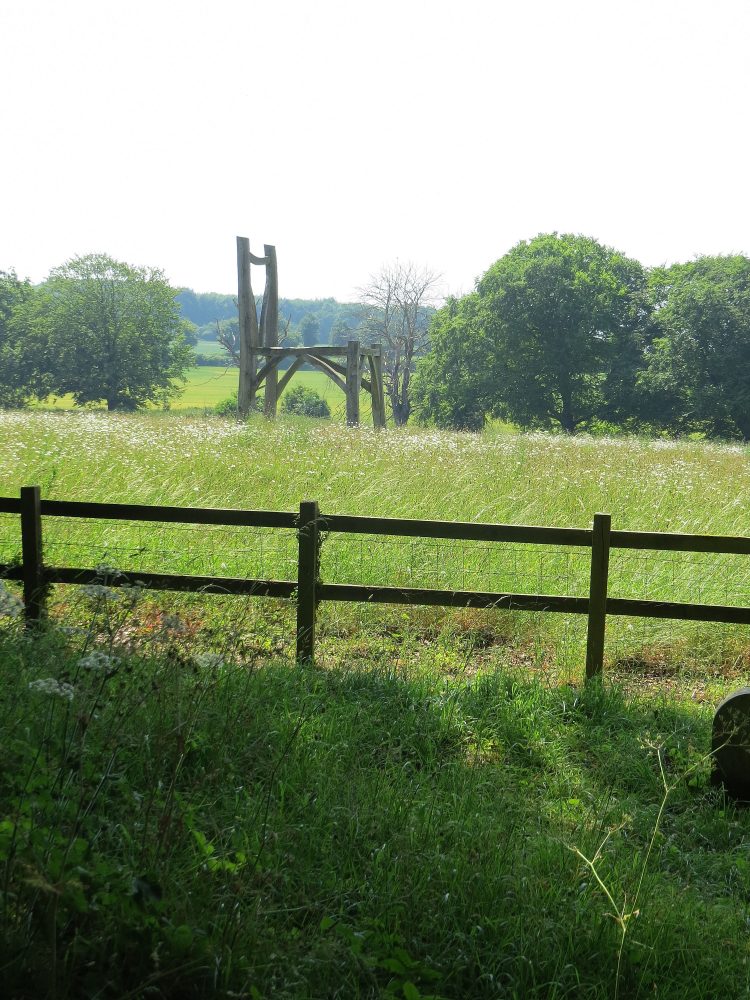 Moving around the manor house past Elizabeth Frink’s large bronze head ‘In Memoriam’ there are enticing glimpses from the stately ascending main beech avenue of a surreal giant wooden dining chair set in wildflower meadows beyond the garden. 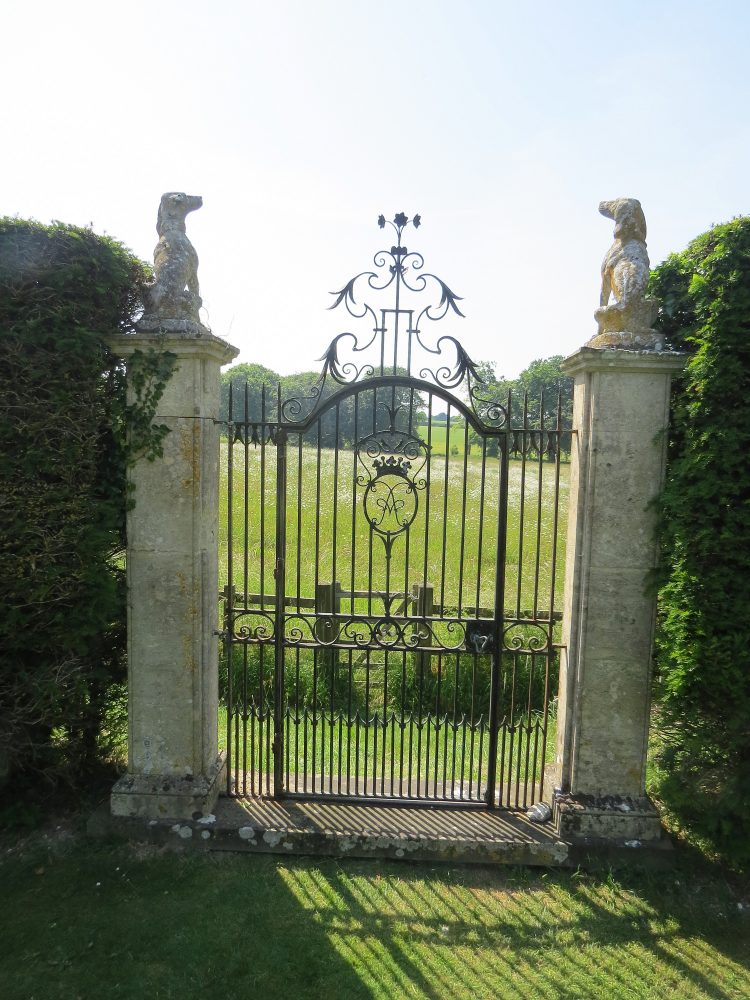 View from Sundial Garden into the Meadow

The full extent of the wildflower meadow can be seen from the adjacent Sundial Garden (a re-creation of Tradescant’s mound with surrounding parterres and tightly clipped yew pillars). Here a beautifully fashioned wrought iron gate flanked by stone pillars topped with seated dogs offers exciting views out of the garden through a break in the yew hedge. 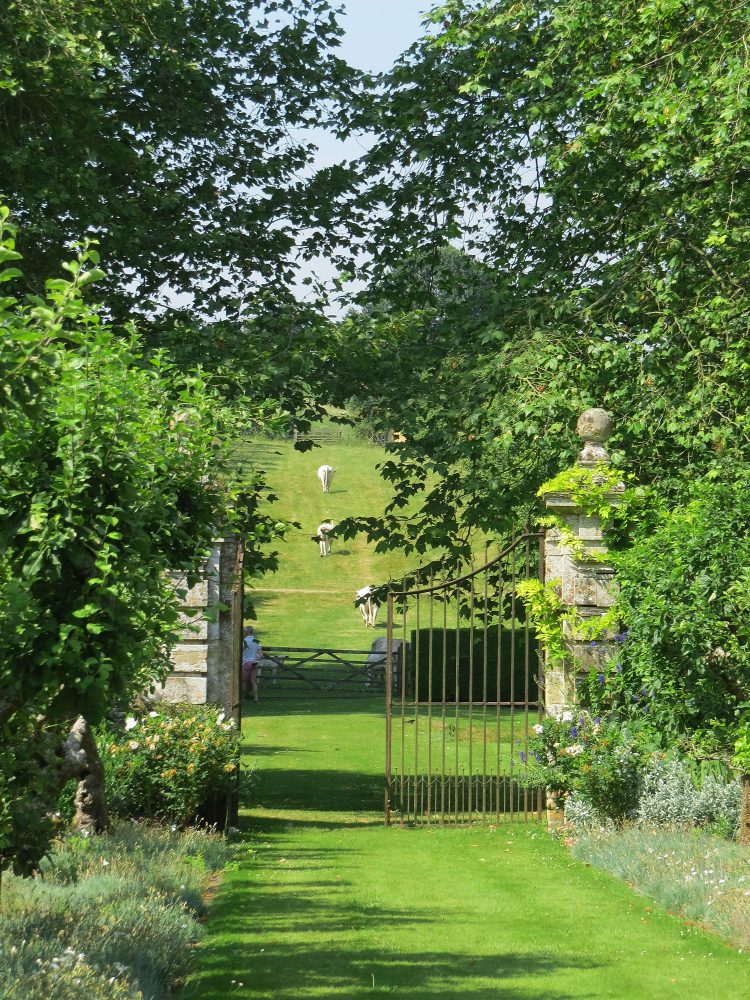 Borrowed View from the White Garden

Finally moving round to the north side of the manor house there lies the White Garden, with summer-flowering shrubs and roses, and a central path flanked with ancient espaliered apple trees underplanted by white dianthus. The eye is drawn down the path, over the gate and the River Crane, and through the gap in the trees to the steeply rising field grazed by Charolais cattle, their calves gambolling like young lambs.

Cranborne has changed over the years as all gardens do; the skill and level of garden care is as good as ever, the wild flower areas now more spectacular, the perennial borders perhaps slightly less so. But for me it is the dynamic created between the intimate garden rooms and the many borrowed views that makes Cranborne unique and special, and one of my favourite gardens.