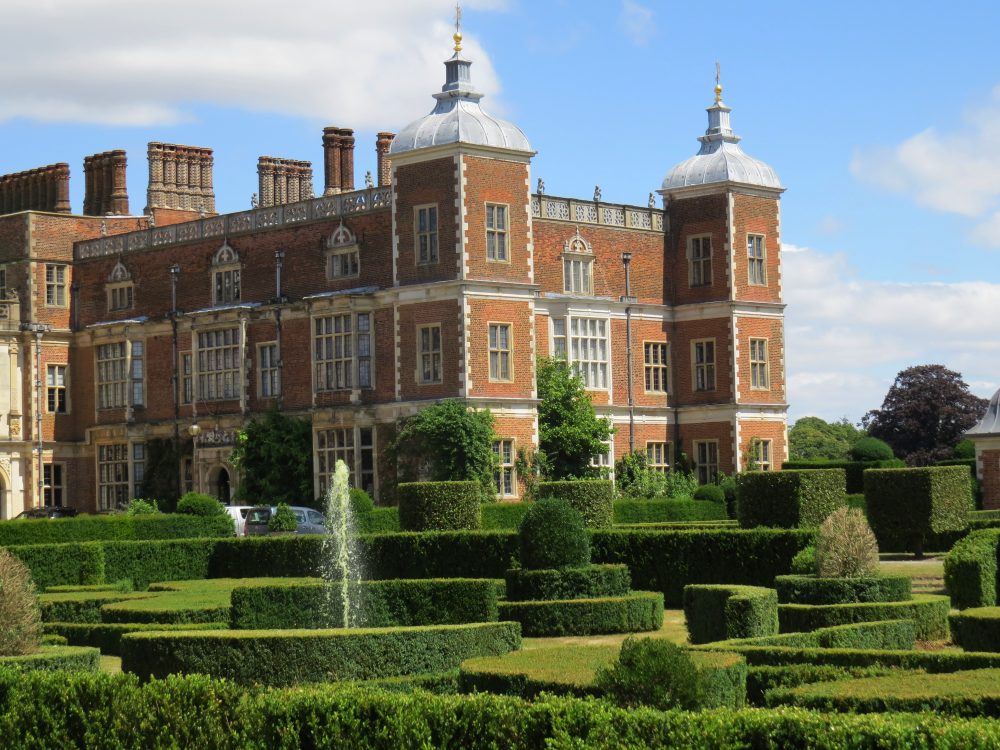 No, I didn’t get out of bed the wrong side this morning, and I’m not usually this grumpy, but the gardens of Hatfield House have turned out to be a great disappointment.

I visited Hatfield this summer just a week after my visit to Cranborne Manor, the Cecil family’s other great garden, both designed by Mollie, the 5th Marchioness of Salisbury and so it is inevitable that I should compare them. It is many years since I was last at Hatfield, in the time before 2003 when the garden passed over to her son and his wife the 6th Marchioness, and I remember it being a well-conceived formal garden with delightful surprises and stylish planting. 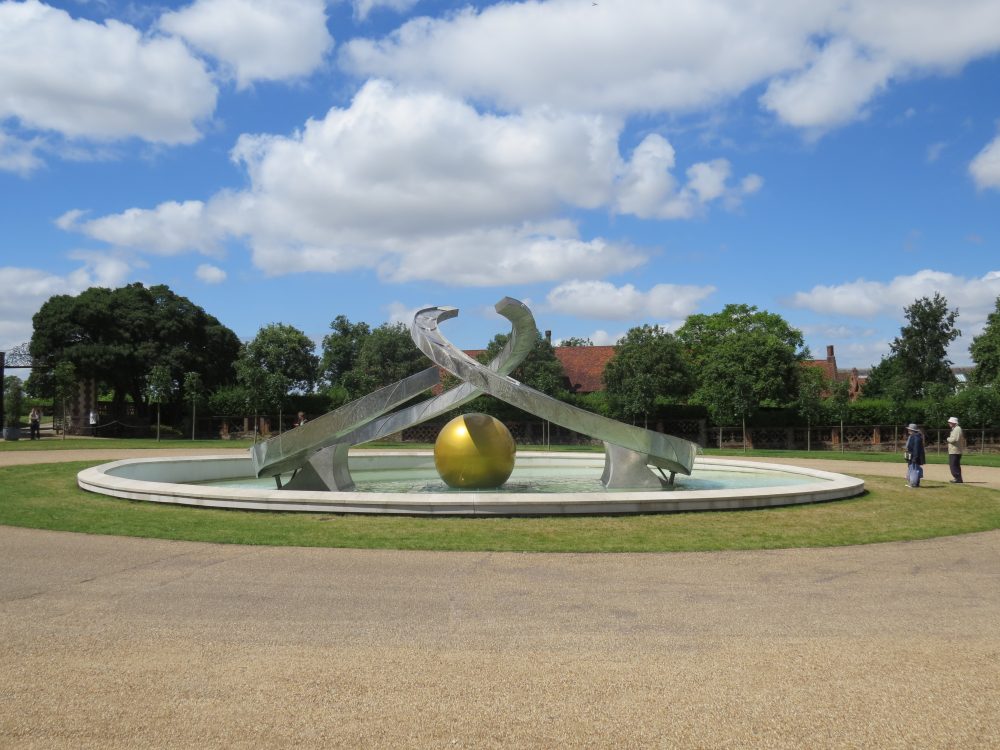 Mollie, Lady Salisbury managed and redesigned the gardens for over 32 years creating England’s most famous formal and authentic Jacobean-style garden out of something that was overgrown, gloomy and badly pruned with  municipal tarmacadam paths. Her great contribution to Hatfield has been strangely airbrushed out of history by her successors. The website dismisses the gardens in a few lines and makes no mention of her, whereas the description of the Park Walks, Woodland and Deer Park and Conservation Policy runs into several pages. 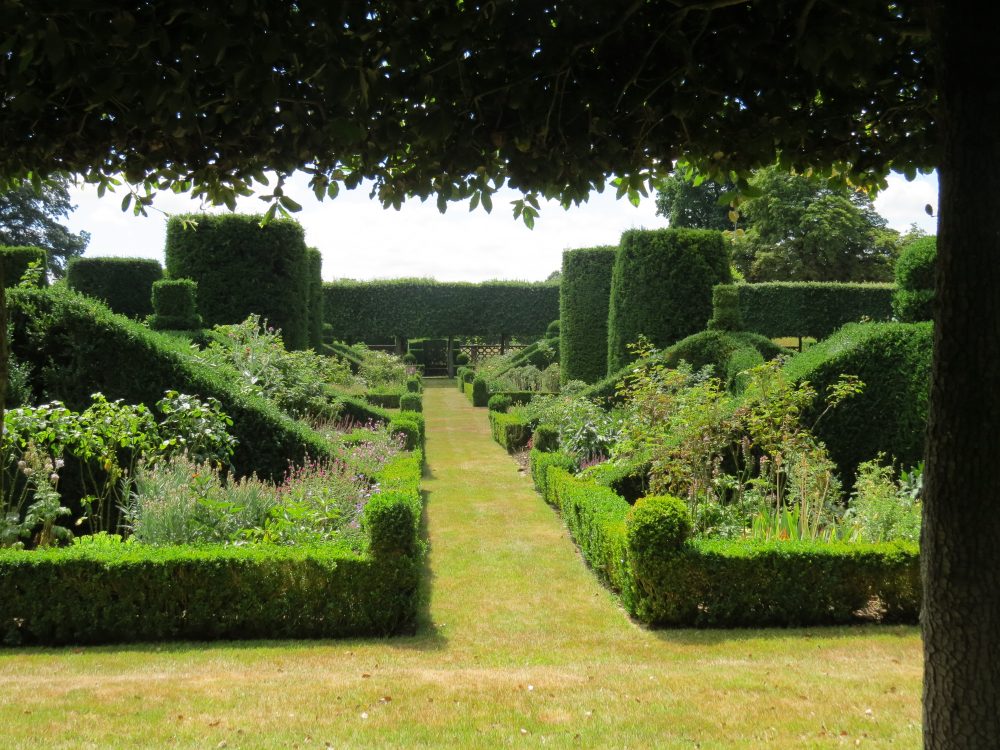 To the north front of the house lies an impressive entrance forecourt, to which a giant and inappropriate water feature has been recently added, reminding me of photographs of the triumphal arch at the entrance to Saddam Hussein’s Baghdad. In a modern location the sculpture would probably work, but set against a fine Jacobean mansion the contrast is jarring.

I remember the East Garden as being a crisp suitably-scaled formal layout of bizarre topiary flanked by rows of holm oaks (quercus ilex) clipped into large lollipops (now grown out into lower-maintenance pleached avenues). The garden used to look sensational from the first floor of the house, one of the great period gardens of England, but as is the fate of many formal gardens it has now been allowed to grow out of scale with its site. The formerly superb planting of perennials and roses was now (unlike Cranborne) without much flower. The maze lies beyond the East Garden and is out of bounds to the public. 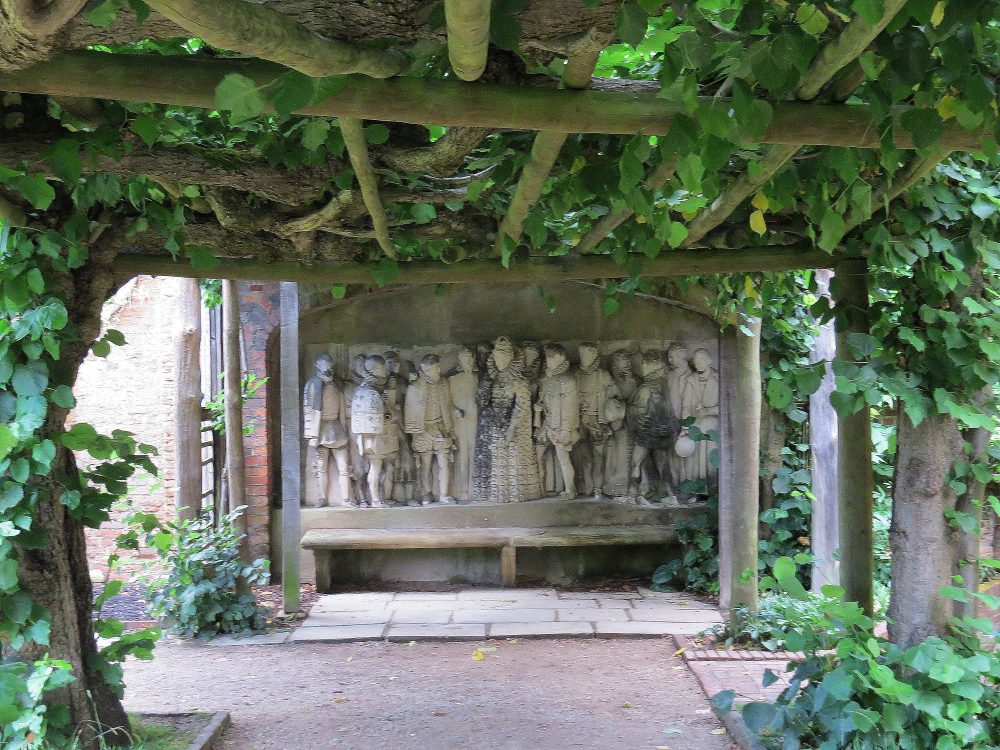 Mollie, Lady Salisbury was most remembered at Hatfield for the Old Palace Garden, an authentic Elizabethan-styled knot garden that sparkled like a piece of fine embroidery. The maintenance of the topiary was still good, but the infill planting of the beds lacked that zing that once made it such an inspiring sight. 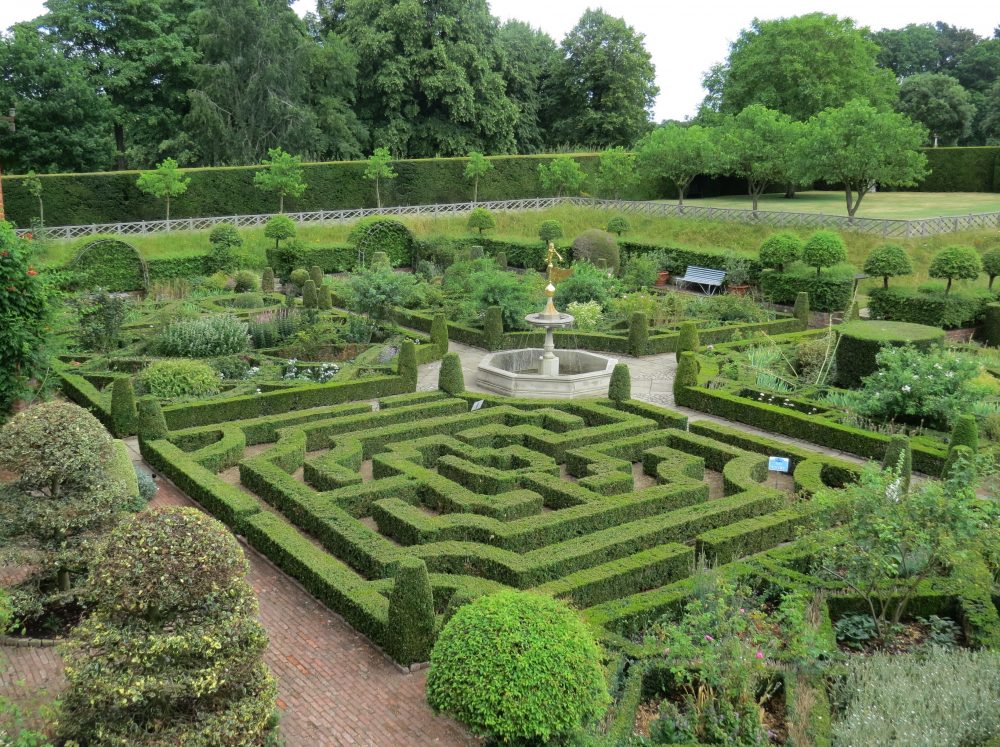 Pleached lime tunnels surround the West Garden which was laid out in 1902. It was whilst living at Hatfield that Elizabeth I was informed of the death of her sister and her own accession to the throne, and this is commemorated by the two fine 19th century stone friezes that are the focal point of the tunnels. The West Garden was redesigned by Mollie, Lady Salisbury as a stylish scented garden but now has unremarkable planting with the bald patches in the beds filled with spindly antirrhinums. 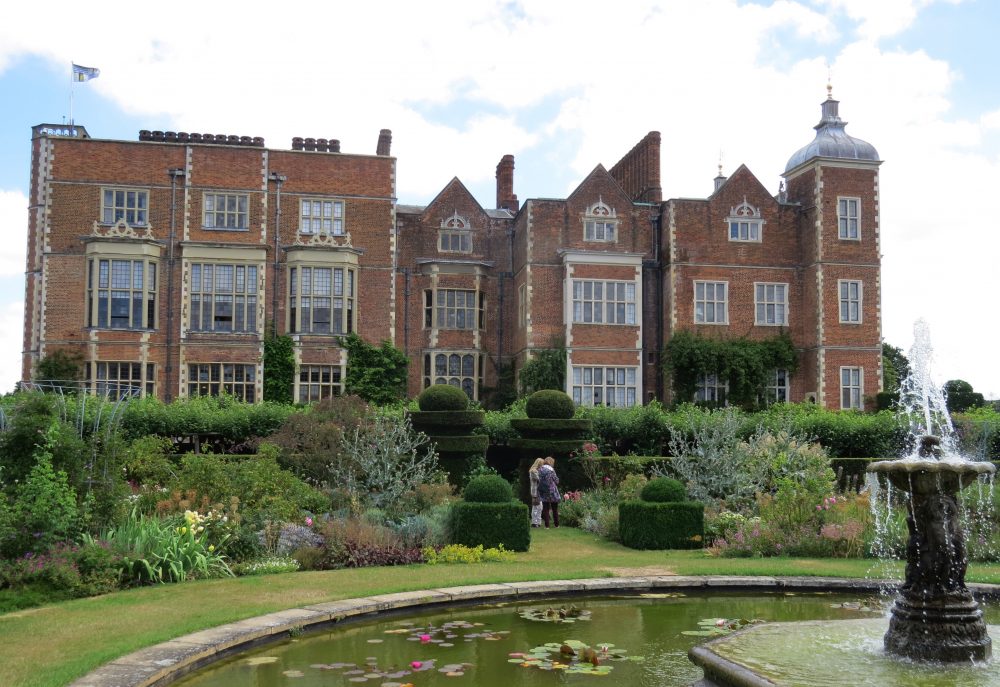 The Sundial Garden owes much to the present owners, as it was commissioned to celebrate the 400th anniversary of the building of Robert Cecil’s great Jacobean palace, Hatfield House. To my mind, the sundial feature and surrounding terrace and raised beds would be more at home as a demonstration garden in a suburban garden centre. The perennial planting whose ‘season extends into August’ (according to the website) was past its best by early July. Newly bedded out annual ageratum sparsely filled some of the blank beds. The fountain bowls, which I remember as delightful, were now festooned with green algae. 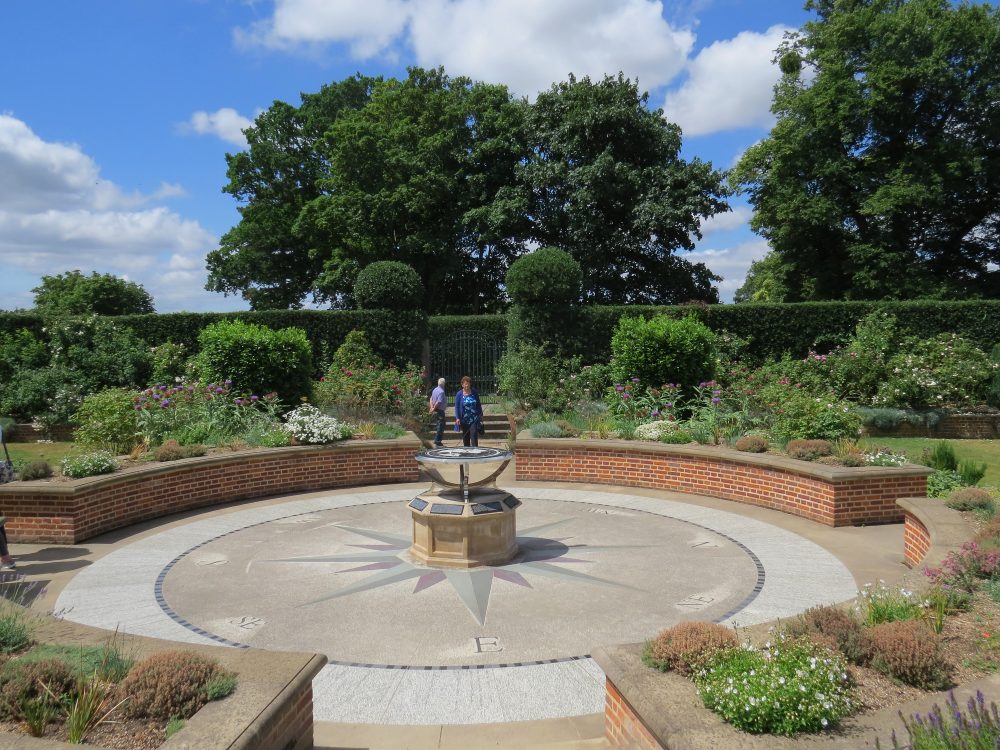 The Woodland Garden still showed the guiding hand of its former owner, the eye being led to a stone urn and pedestal, but unlike Cranborne where ox-eye daisies, wild orchids and meadow flowers were to be found in profusion, the grass at Hatfield was, well, grass. 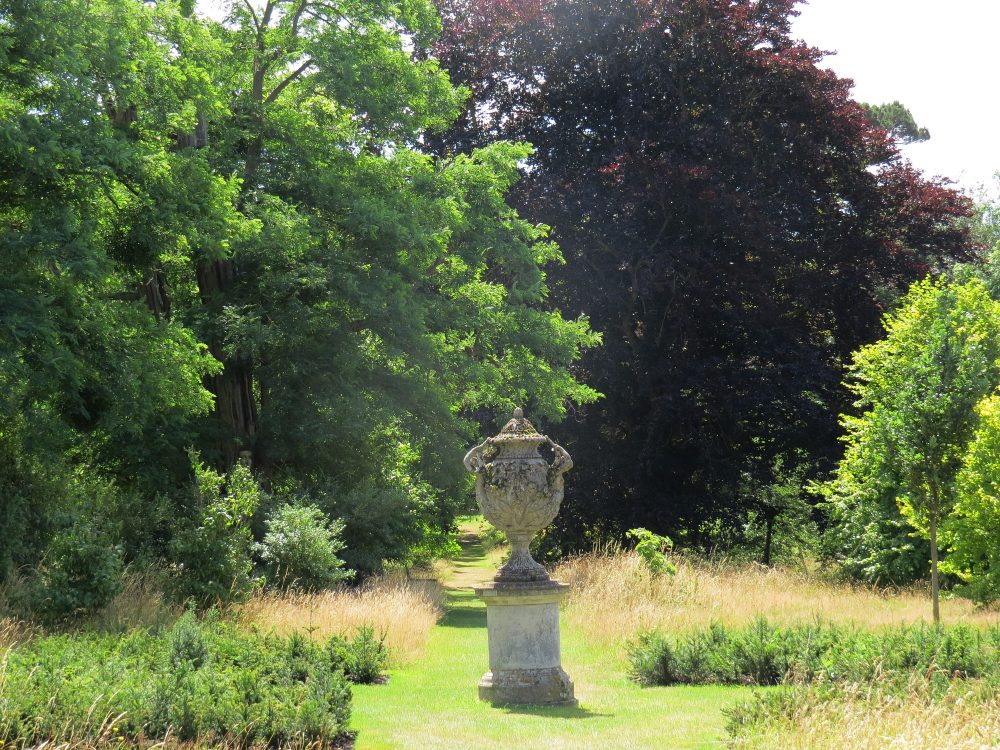 The large private South Garden which flanks the main front of the house can be partially glimpsed from a small discreet wooden raised platform. This appears to be the most interesting part of the garden.

I am left with the impression that the interest of the current owners lies elsewhere. Despite the garden retaining its good structure, I think that visitors can expect much more when charged £15 for admission to see such uninspired and unremarkable planting ……………………

Note: The East Garden is only open the public on Wednesdays