What is an urban park for? Is it somewhere you go to escape the pressures of city living, or should it be an abomination of minority needs – all-weather pitches, athletics tracks and changing facilities, tennis courts, basket-ball courts, car parks, children’s zoos, and fenced off specialised gardens, to name but a few.

Our urban parks are under pressure as never before, as new free schools and academies set up, school playing fields are built over, and urban population densities soar with new residential high-density developments. It is admirable that our local councillors to want to provide new facilities, but it seems that they regard all the open areas in our parks as unproductive and up for grabs. 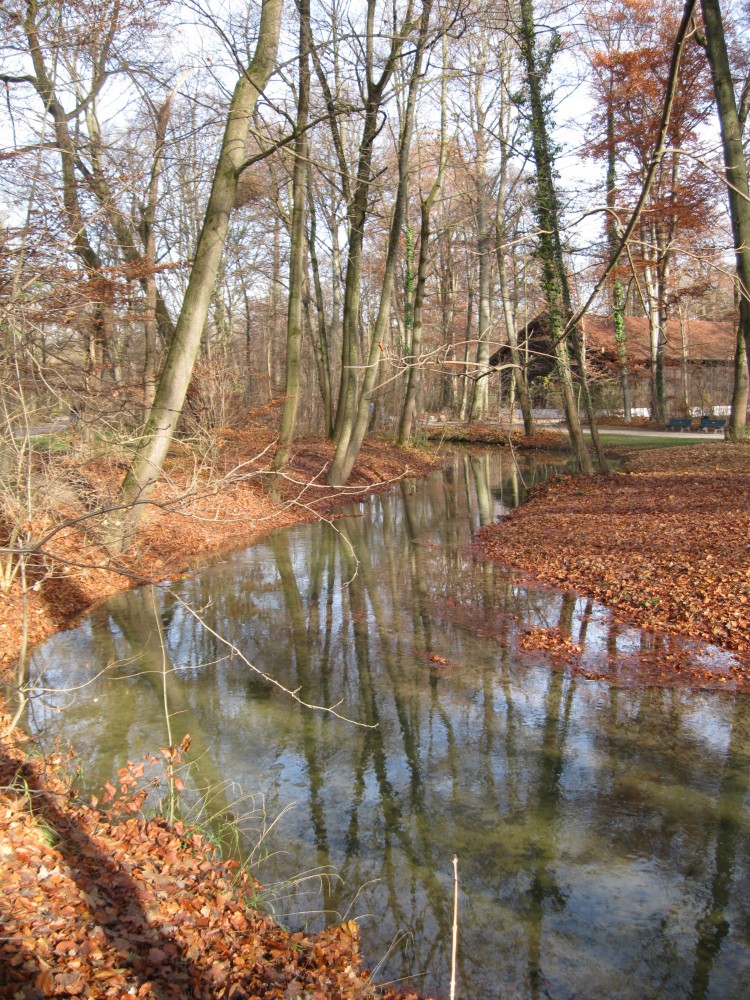 When everyone told me I must see Der Englischer Garten, I assumed that either Munich must be a really boring city, or that the park was something very special. This was a park that lifted my spirits, and left me angry about our own lack of vision and inadequacy. 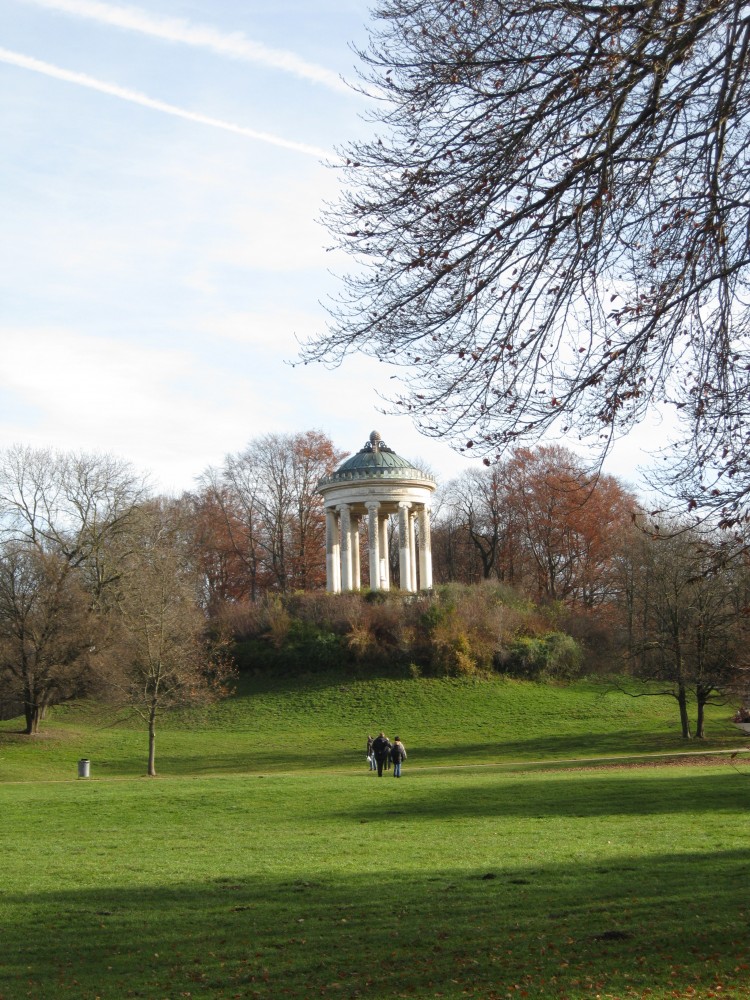 The land for much of the park was set aside in 1789 by a military engineer, Sir Benjamin Thompson, largely for agricultural production; but the real driving force behind its present-day appearance was his collaborator, Friedrich Ludwig van Sckell who had studied landscape gardening in England, was a great admirer of Capability Brown, and became Bavarian Court Garden Supervisor. Note: Court Garden Supervisor not promoted groundsman. 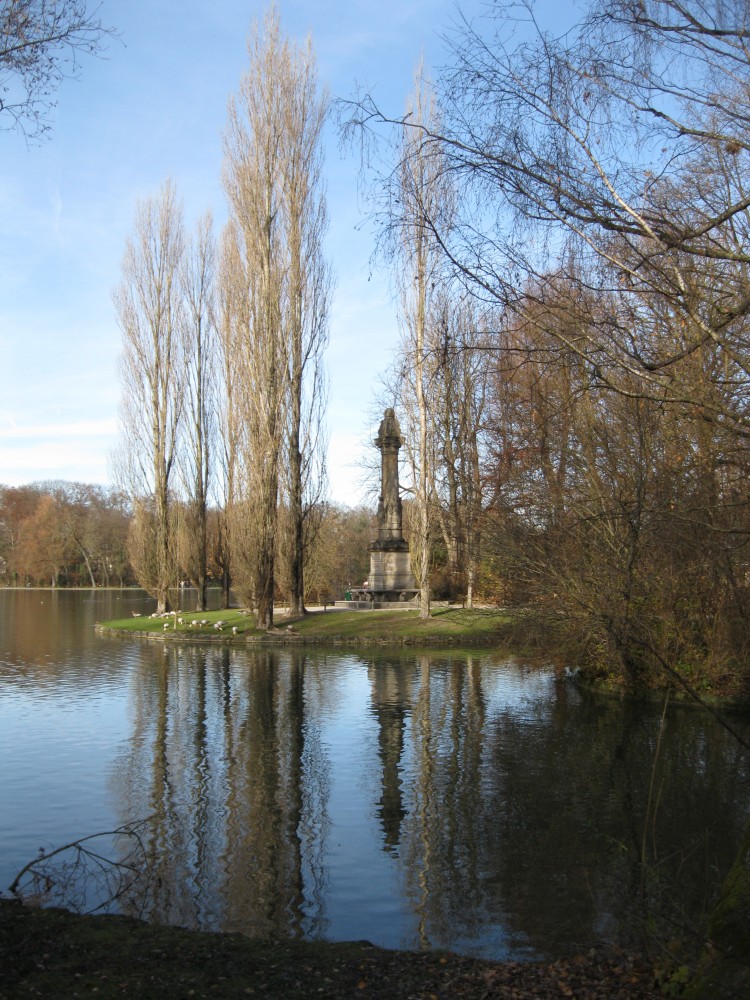 The fashion for Brown’s style of landscape had spread across Europe by the late 18th century; most of these gardens were the pleasure grounds of royalty or the aristocracy. However, Elector Carl Theodor had made a botched attempt to swap Bavaria for somewhere more interesting, and subsequently ingratiated himself with the angry Munichers by giving Der Englischer Garten, as it became known, for the ‘amusement of the people of Munich’ 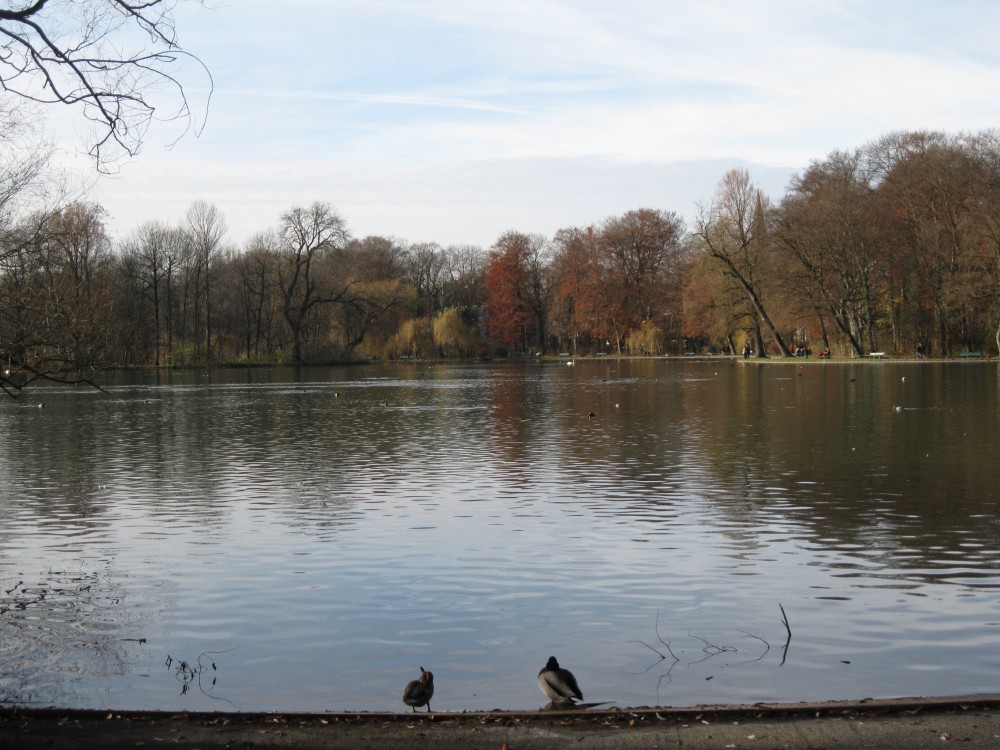 Having avoided the late 19th century fashion for planting newly discovered specimen trees from around the world, the garden was devastated by Dutch Elm disease. The enlightened replanting  was largely carried out in disease-resistant elms, rather than changing species and the character of the park, as has happened so many times in Britain. 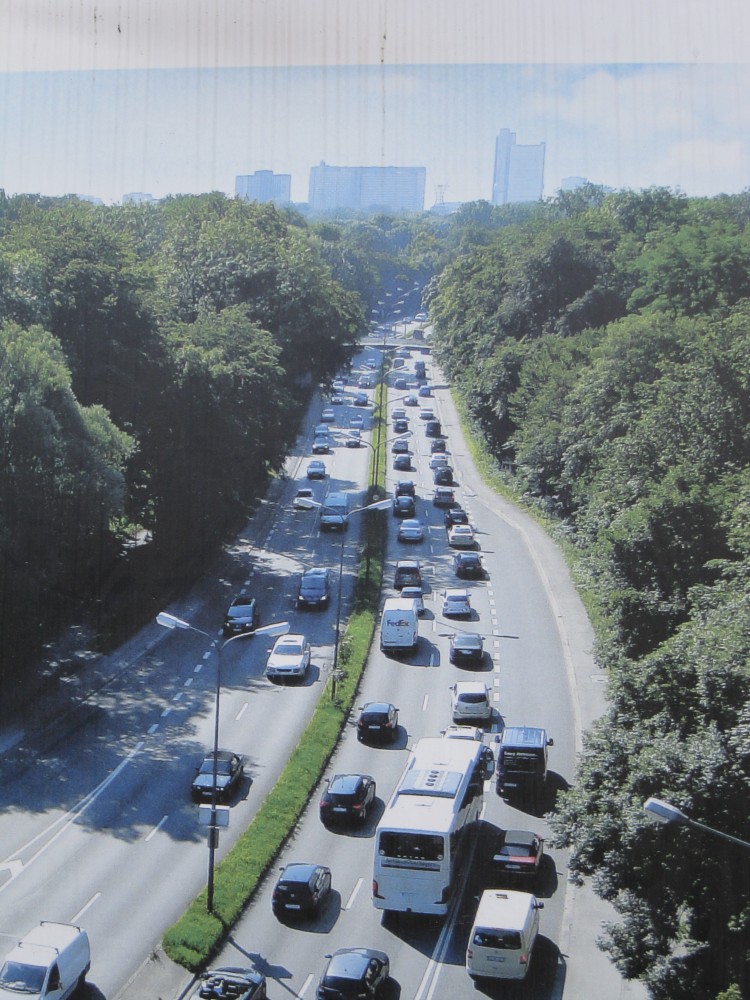 My visit was in late November, and so I missed the excesses of Oktoberfest  (the park has four beer gardens, the largest with a capacity of 7,000 revellers), and that summer obsession, naked sun-bathing, for which a large prominent area in the park is set aside. However, I was able to indulge in that other German passion, sitting outside on a cafe terrace, on a cold sunny day, legs warmly wrapped in a rug, like the confused old grump that I am sure I will become. As Germans say ‘Gemutlich’ (cosy). 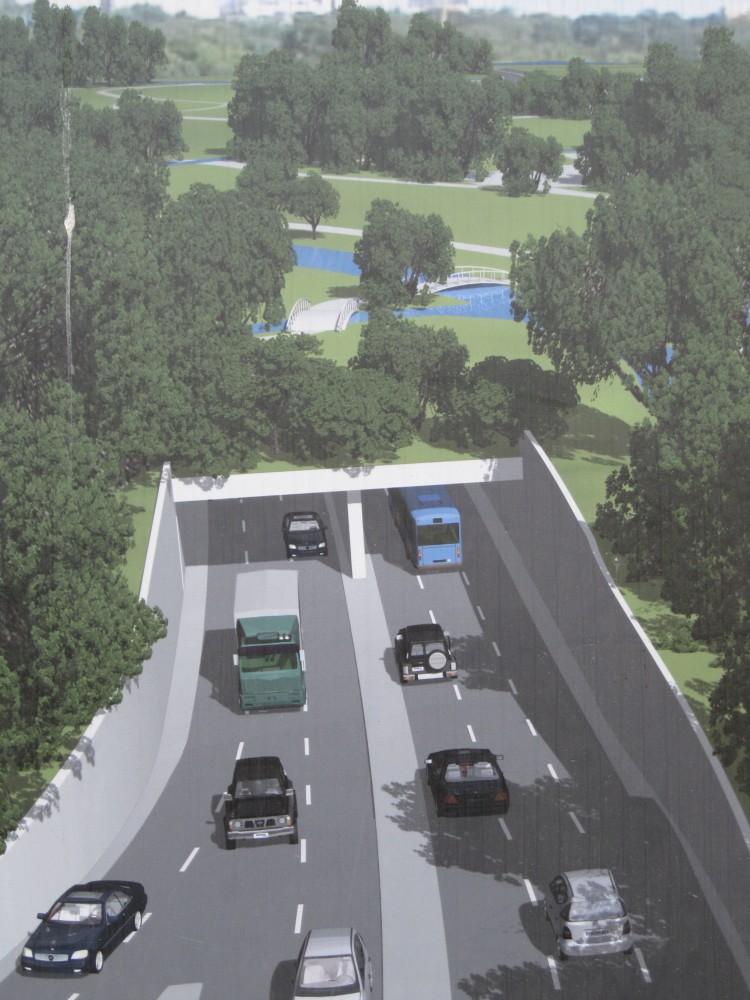 Entering the gates from close to the university, and passing through the belt of trees that surrounds the park, I gave a sigh of relief – it was as if I was leaving the city. Not an office or residential tower in sight to spoil the illusion; and the first impression was of a calm, informal, wooded landscape.

Ahead lay the Monopheros, a round Grecian-style temple on a large mound. Crossing a crystal-clear, shallow, fast-flowing stream, where swimming labradors were forlornly trying to stalk ducks; and walking on, past riders exercising their horses on the park’s sand rides and a few footballers; it became apparent that the predominant tree in the park was beech, the burnished gold leaves having yet to drop. Ahead lay the Kleinhesseloher See, the large serpentine lake, with its three islands; remarkable for being so shallow, clean, and clear. 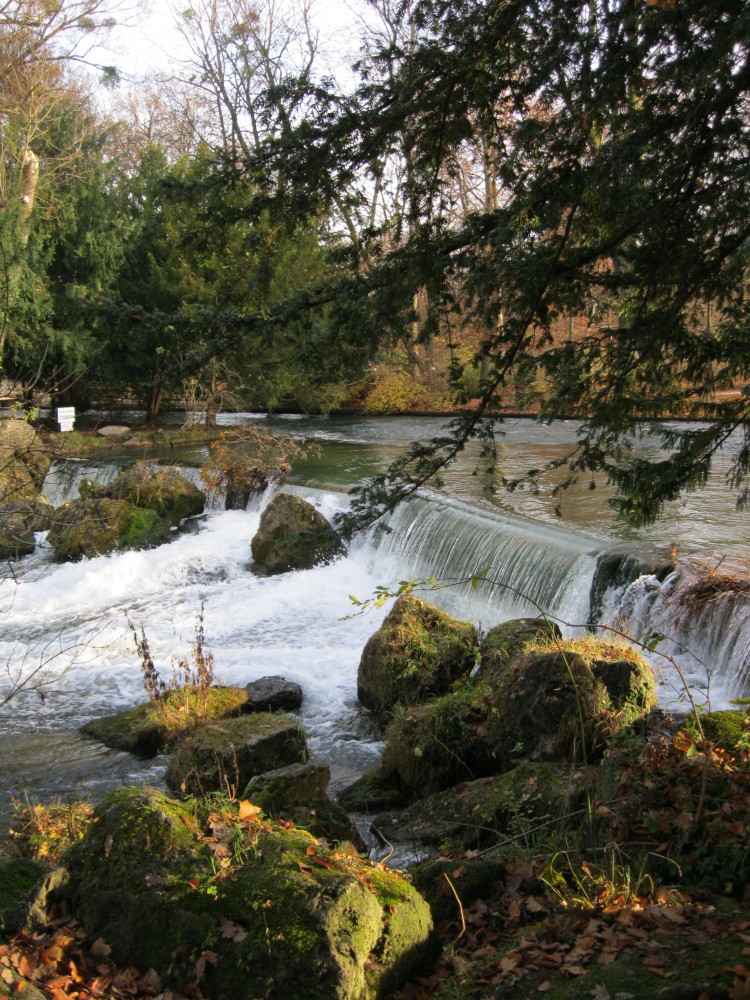 Close by is the great failure of Der Englischer Garten – the Isarring, Munich’s central ring road, driven through the park in 1963 and dividing it in two; but currently there is a vociferous and visionary campaign to re-unite the two halves of the park, by sinking the road in a 200 metre long tunnel. 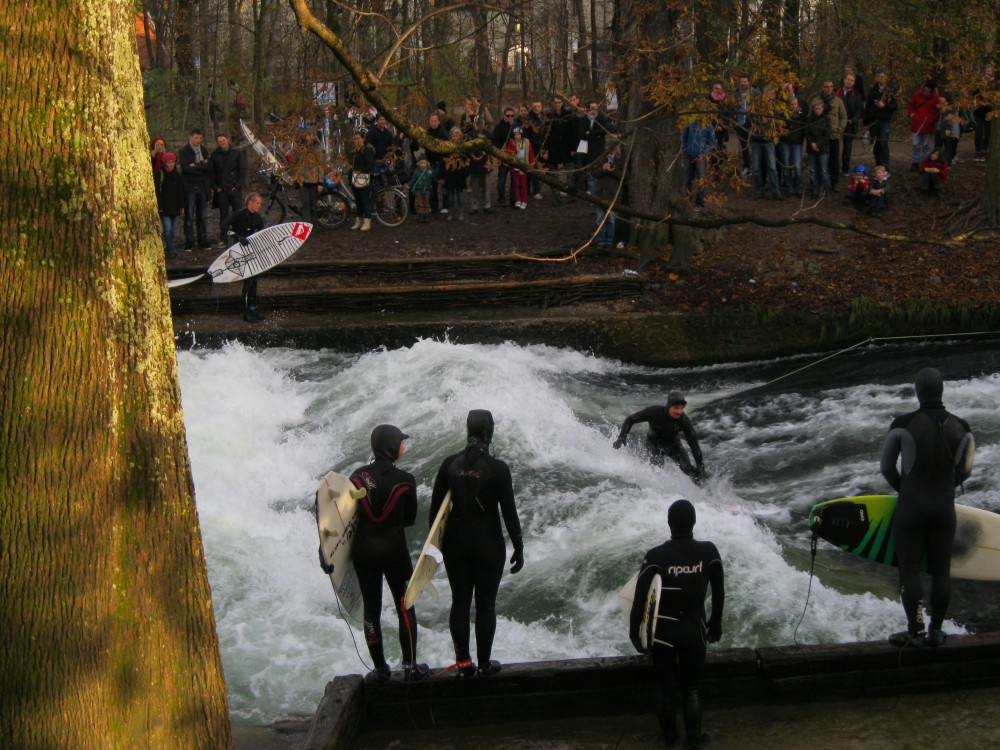 North of the Isarring, the remainder of the park, the Hirschau, had a more peaceful character, with meadows and herds of grazing sheep. That other delightful feature of German summers, open-air performances takes place here, accommodated in a large mown grass amphitheatre. 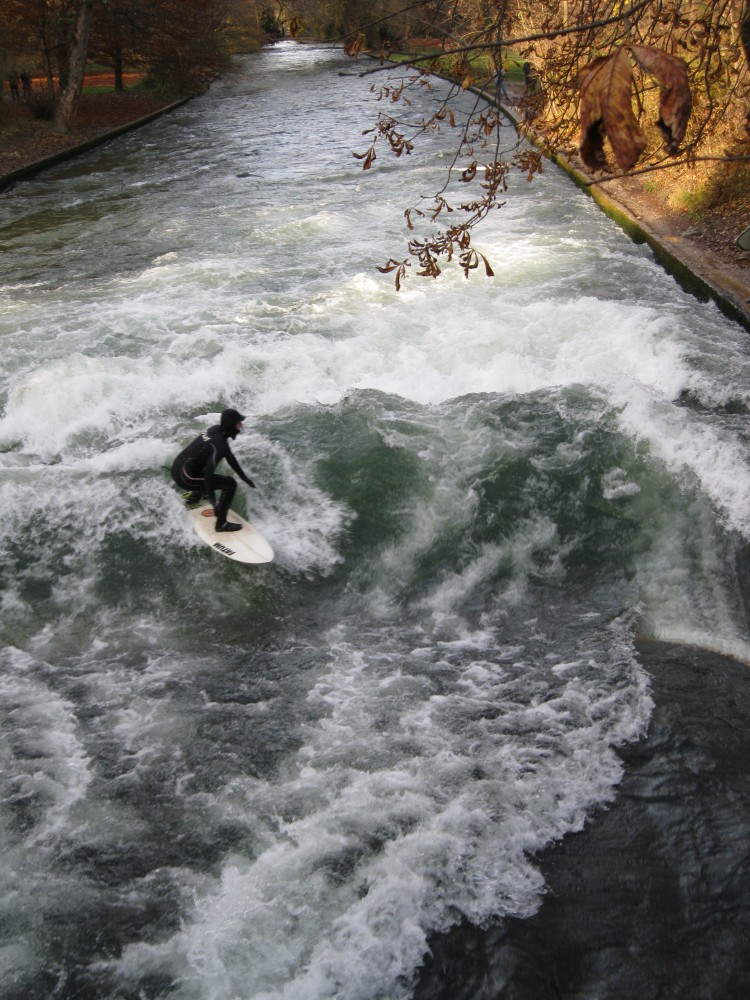 The park’s most unique feature lies at its southern end – the incoming river Eisbach is turned into a huge torrent of water with the help of a substantial pumping mechanism, and the shaped river bed creates a surfers’ standing wave. Crowds line the banks and the bridge parapet to watch and take photographs, as neoprene-clad surfers take it in turns to ride the wave, eventually losing their balance to be swept rapidly downstream, and out of the way of the next wave-rider. 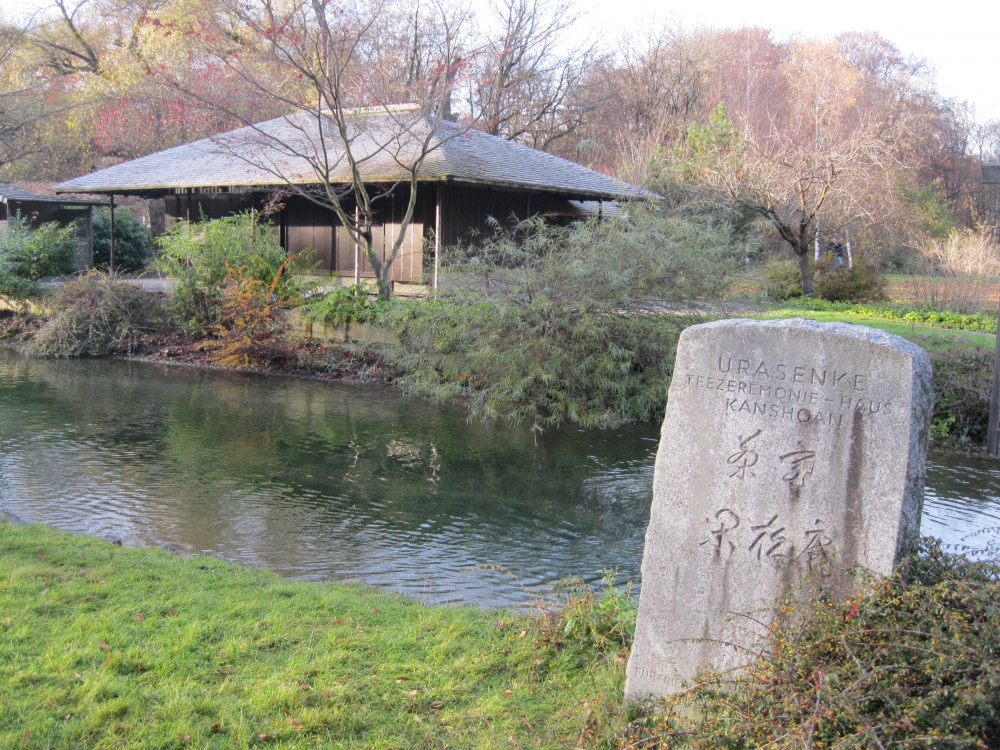 Our municipal parks seem to have an obsession with fencing everything off, from dog-free areas to dog-exercise areas. Whatever happened to poop and scoop, and dog leads? If we wanted to create a Japanese teahouse and garden, it would be an unsightly fenced-off enclosure, biting a chunk out of the park; but the solution here, created at the time of the Munich Olympics, is an island in a large pond linked to the park by a causeway – a restrained and stylish solution. All is open and accessible, even the dangerous waters of the standing wave.

This park is an object lesson for us all, how vision and determination can retain the integrity of a beautiful 200 year old landscape.