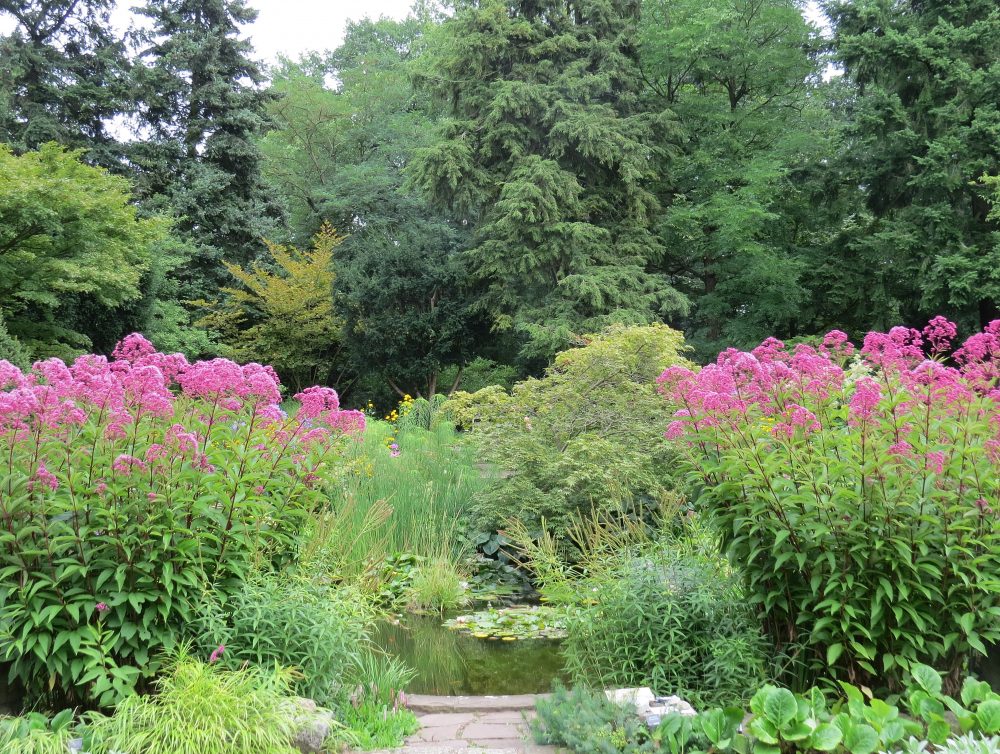 It was a trip to see my old friend Gerhard and time on my hands that led me to the Karl Foerster Garden in Potsdam-Bornim a short train ride from Berlin. It’s a journey that can easily be combined with a visit to Frederick the Great’s palace and garden at Sanssouci.

A longish unsigned walk from the nearest bus stop brought me to the empty but well-planted car park and an entrance kiosk leading into the enormous garden nursery. The other visitors were retired couples, but the nursery was devoid of those important British attractions – a cheery cafe serving coffee cake and warm cheese scones, Christmas decorations in July, grim little ‘water features,’ grey weathered fibreglass cherubs, every imaginable type of garden power tool and the usual tat that I can’t resist buying but send to the charity shop a few weeks later. 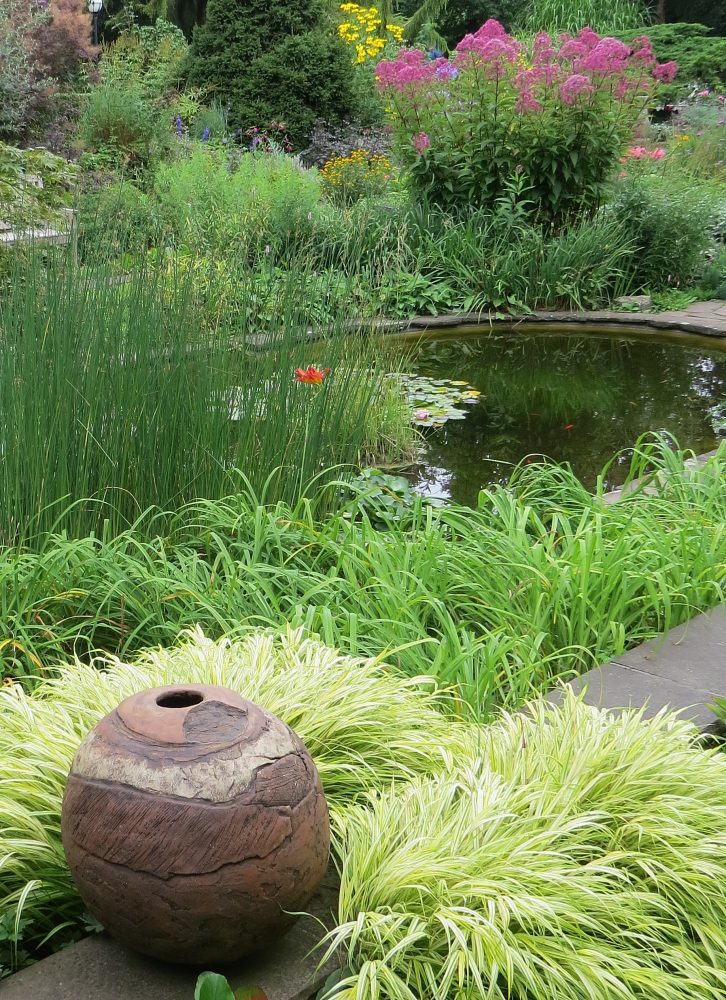 The kiosk was unattended and walking into the nursery, I came up against the large rump of a lady bending over laying out different varieties of phlox. She spoke no English but without standing up pointed me in the direction of a high evergreen hedge with portaloos peeping out from behind. Here was the entrance to the most influential German garden of the 20th century. 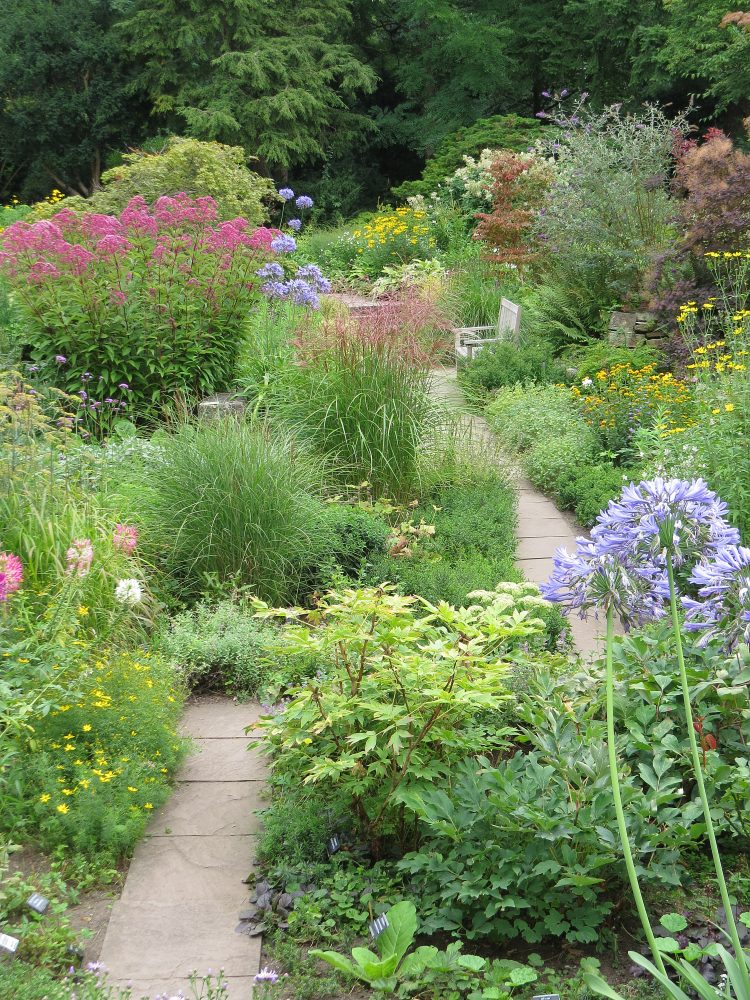 It was William Robinson’s concept of a wild garden that was the starting point for both Gertrude Jekyll and Karl Foerster. Opening his Bornim nursery in 1912, when his English counterpart Jekyll was at the height of her career, Karl Foerster developed the concept of ‘wilderness garden art’, a far cry from Jekyll’s meticulous, beautiful, colour co-ordinated and labour-intensive perennial planting. What emerged were two very different garden styles, but it took until the 1990s when the English Country Garden had finally run its course, for Foerster’s great design contribution to be acknowledged in Britain and enthusiastically taken up. 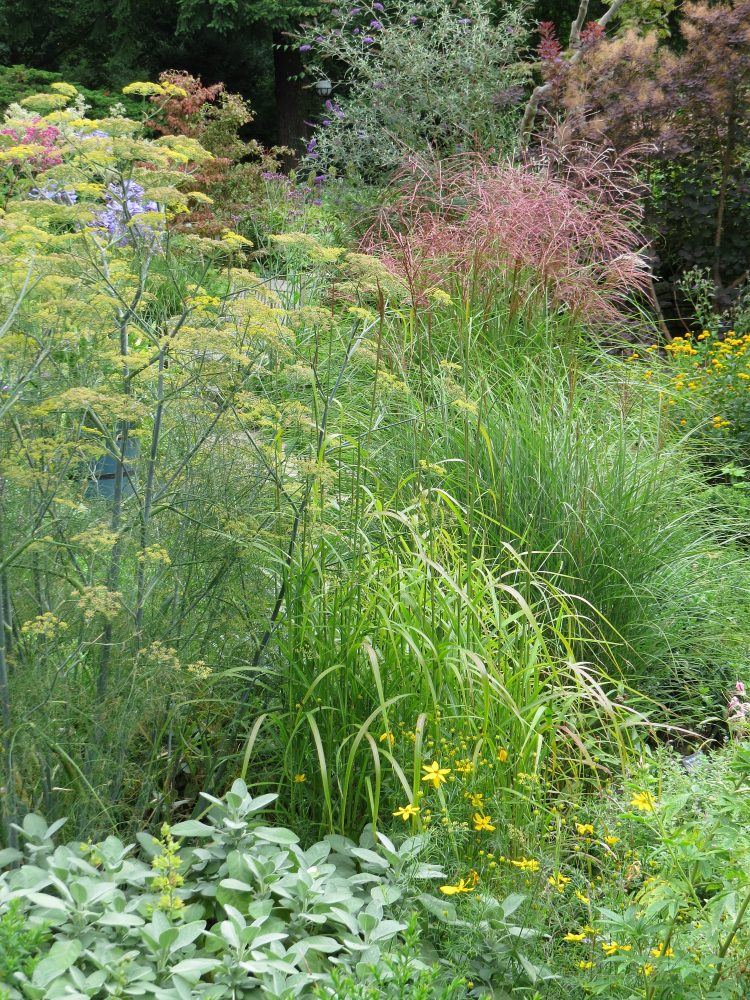 Foerster was a superb plantsman, having extraordinary business success as a plant breeder. His nursery introduced over 350 new cultivars, mostly perennials and grasses, a third of which are still widely available. His garden, always open to the public, was a showcase and experimental laboratory for his new style of planting, combining tried and tested new perennial cultivars with ferns and grasses to give year-round interest in colour and form, yet stand up to the cold and dry Berlin winters. Frosted grasses are so impressive in these conditions compared to the sad tangled heap of rotting stems usually found in Britain’s maritime climate. 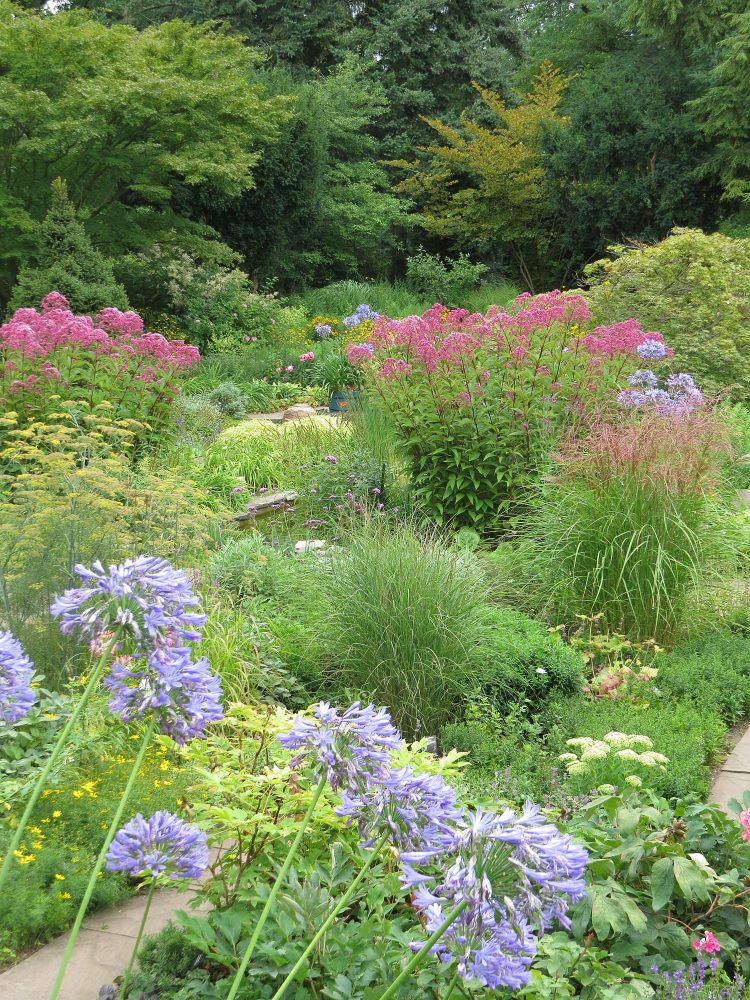 His career as a writer, lecturer and broadcaster made him a public celebrity which when the Nazis came to power brought him unwelcome attention. He successfully resisted the Nazi demand to propagate and sell only purely native German plants, but his employment of numerous dissenters and Jewish friends at his large and famous nursery was an extraordinarily risky policy. His high profile and enlightened liberal views made the Nazis suspicious of him and I think that his out-of- character decision to become a party member in 1940 was intended to deflect attention. 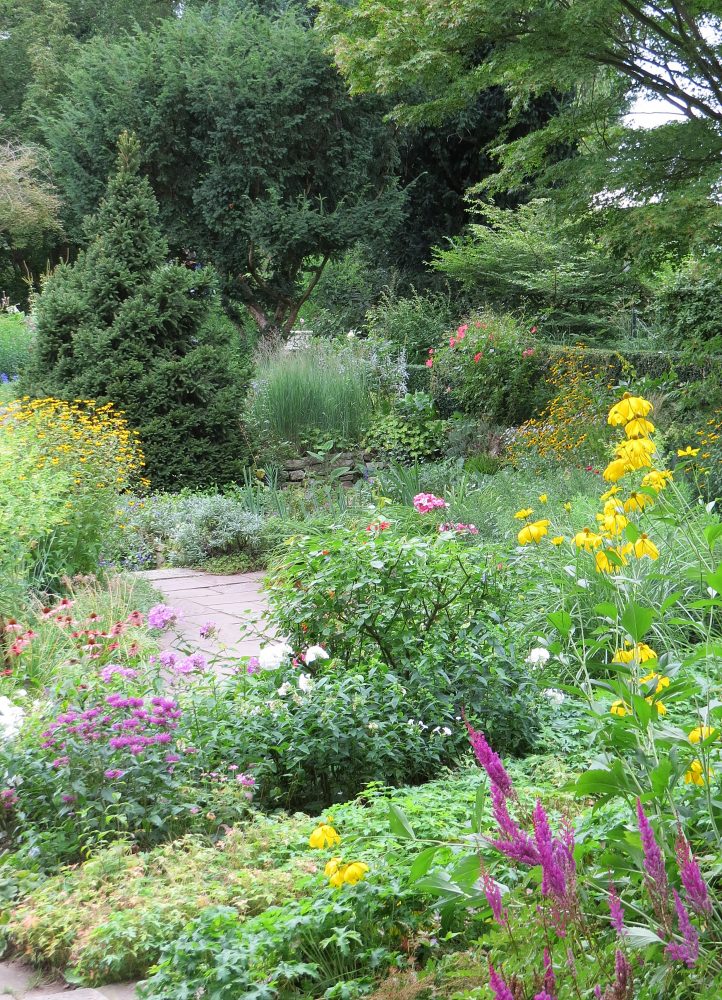 At the end of the war the Soviet military administration took control of the nursery and it became one of the very few suppliers of perennials in East Germany. He continued to administer the nursery, received honours and visits from the president of the DDR, but after his death in 1970 the communist government expropriated the nursery turning it into a state-run enterprise. Despite the house and garden being declared a national monument in 1981, they became increasingly run-down.

His daughter, Marianne, upon her father’s death fiercely protected his reputation and promoted his work, and the political roller-coaster finally came to an end with German reunification in 1990. The restoration of the garden became a government priority, and major reconstruction and re-planting were completed in time for the 2001 Potsdam Bundesgartenschau (Federal garden show). Marianne Foerster died in 2010, 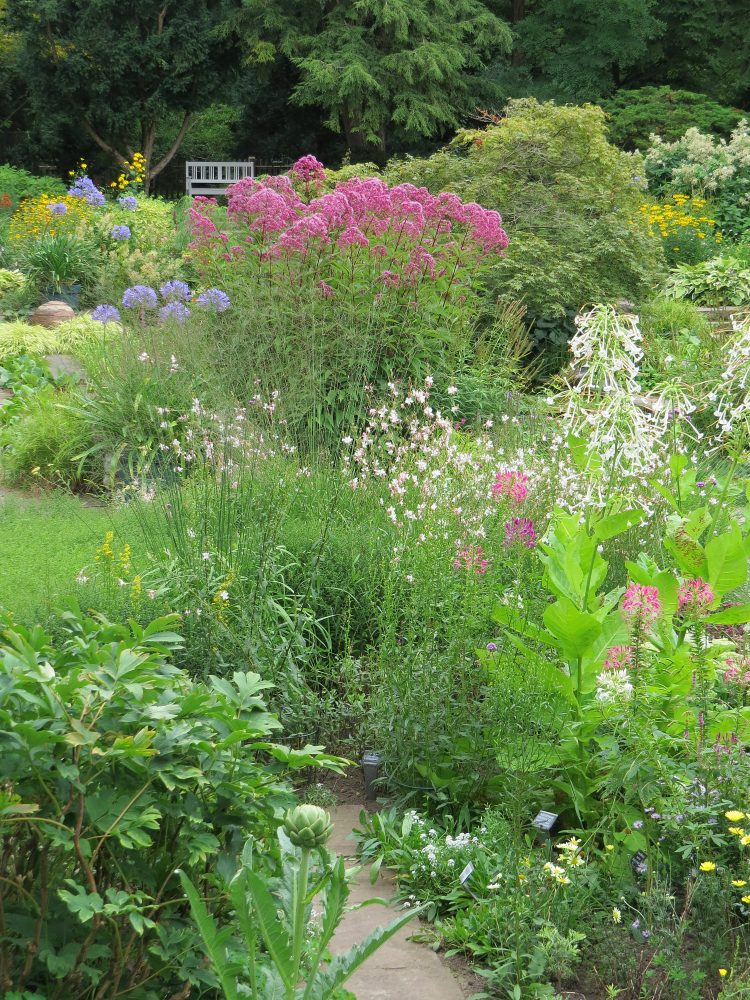 The garden itself is small (0.5ha – 1.2 acres) and passing through the gate, the large house (undergoing restoration) lies immediately in front. But it is the Senkgarten (Sunken Garden) that draws the eye, and the shock of seeing a garden that is from the same period as Sissinghurst but is uncompromisingly modern makes the latter look uptight and fussy in comparison. It raises the question how we British can have been so parochial and inward looking as not to have taken on board German garden developments in the 1920s and 30s? 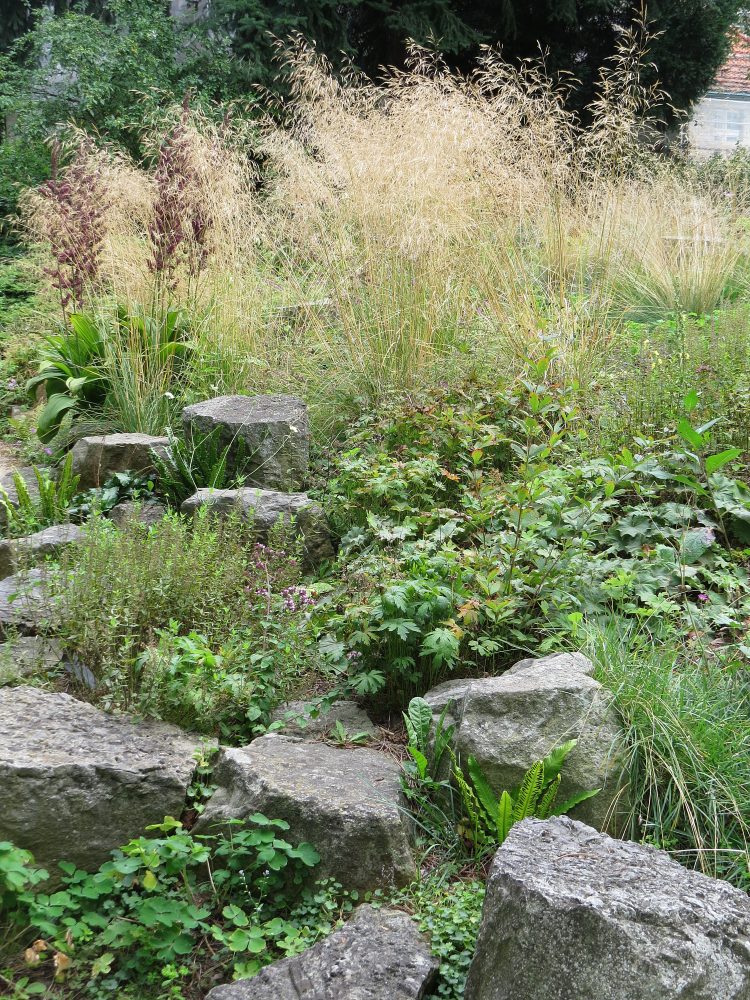 Today, although the garden has a much higher profile in Britain, it is the perennial and grass planting of the Senkgarten that gets all the attention, whilst the equally large Steingarten (The Stone Garden) to the opposite side of the house is ignored. We still choose to forget the 1930s fashion for rock gardens. Foerster built this large rockery garden and experimented with informal plantings of ferns, grasses and small shade loving perennials. I expect the fashionistas of garden design will get round to rediscovering this sometime soon…………………..