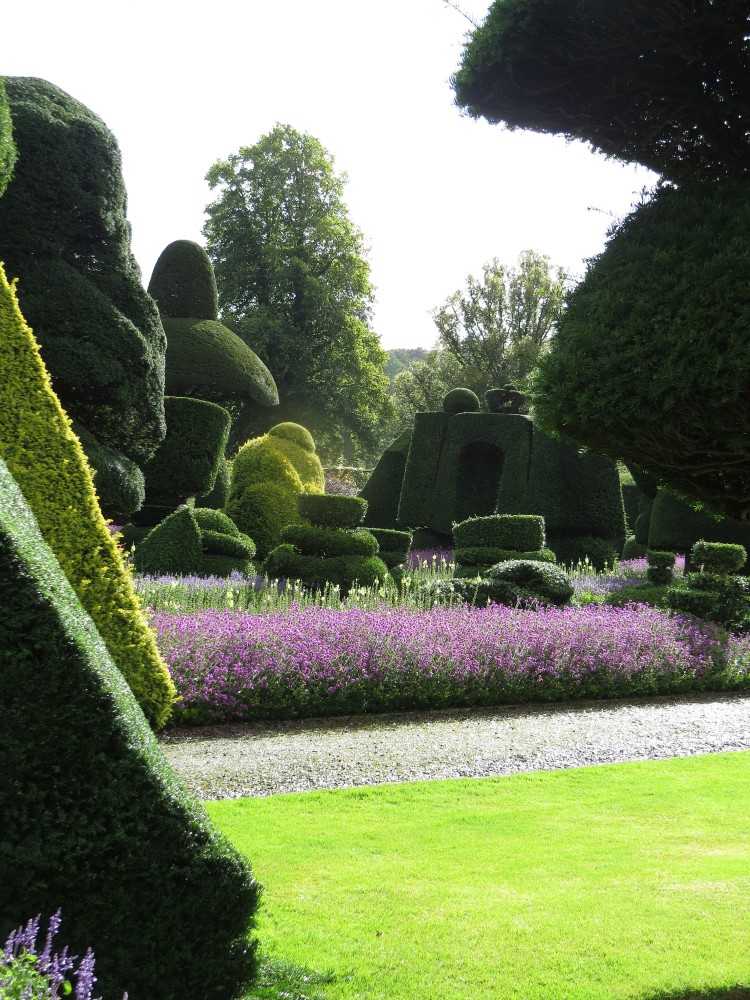 Having practised for many years as a garden designer and also being such an avid garden visitor I am often asked what makes a good garden. It is much more complex than it might at first appear.

Certainly you have to meet the needs and more importantly the aspirations of the clients, develop good strong structure, style, use planting that holds interest throughout the year, and provide good detailing and well-chosen materials; but there are ephemeral qualities that to my mind set a good garden apart, such as a sense of place, playfulness and of continuity and these tap into the sub-conscious.. 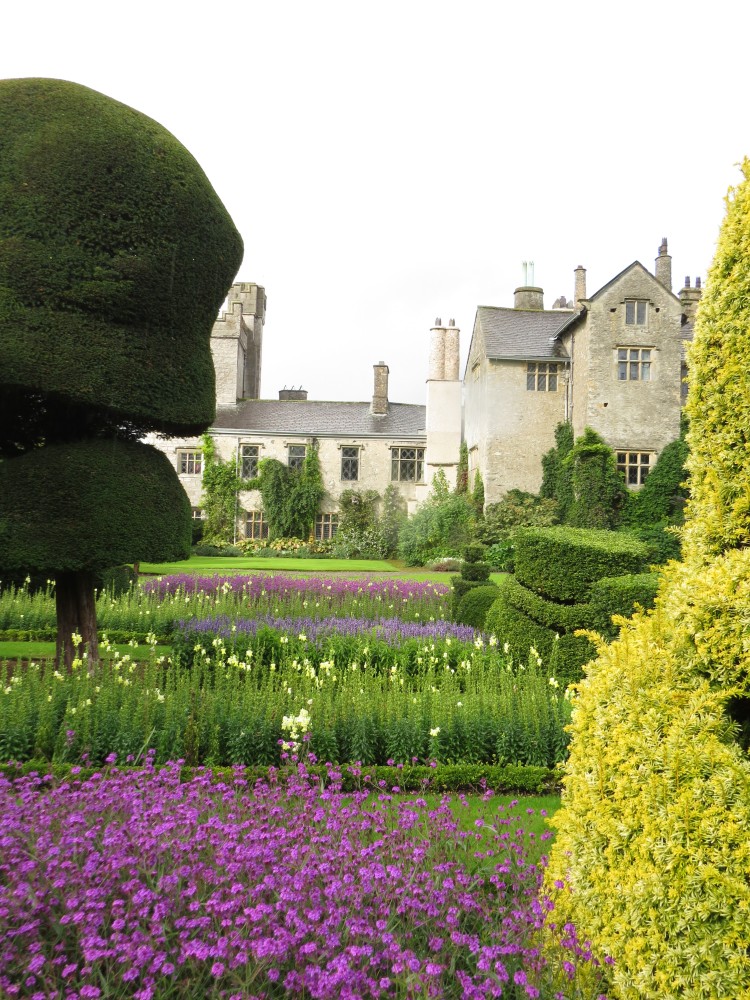 These qualities are something often missing from modern gardens, and are a reason why I find so many show gardens at Chelsea and the other great flower shows disappointing. They seem what they are, here today and gone tomorrow. The great and to my mind under-rated early 20th century garden designer, Harold Peto, once remarked that ‘old buildings and fragments of masonry carry one’s mind back to the past in a way that a garden of flowers cannot do.’ Today, his pillaging from Renaissance Italy for fragments of masonry is rightly looked upon with horror and disdain, but he does have a point – it is this sense of a past that most often gives a garden solidity, dignity and continuity. 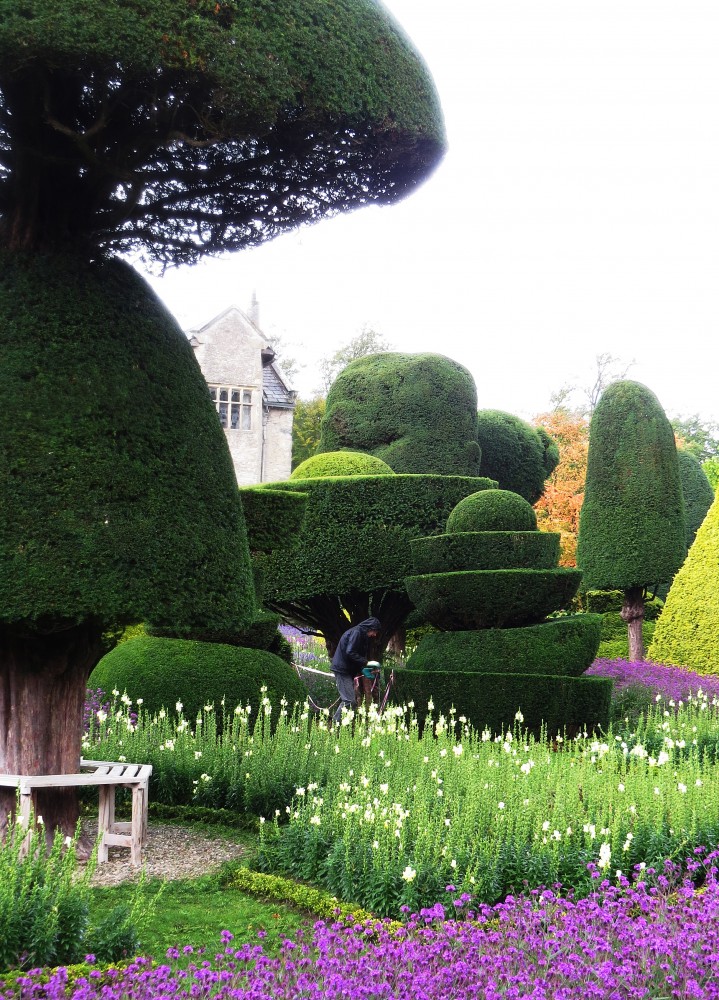 Levens Hall’s interest lies not so much in its homely Elizabethan house or in ancient artefacts but in the long period of neglect suffered by its 350 year old yew topiary. Laid out in the late 17th century in the fashionable Dutch style by Guillaume Beaumont, royal gardener to James II at Hampton Court Palace, it miraculously survived the onslaught of the English Landscape Movement when nearly all topiary gardens were ripped out in favour of a natural landscape of grass, trees, and of water reflecting the ever-changing skies. 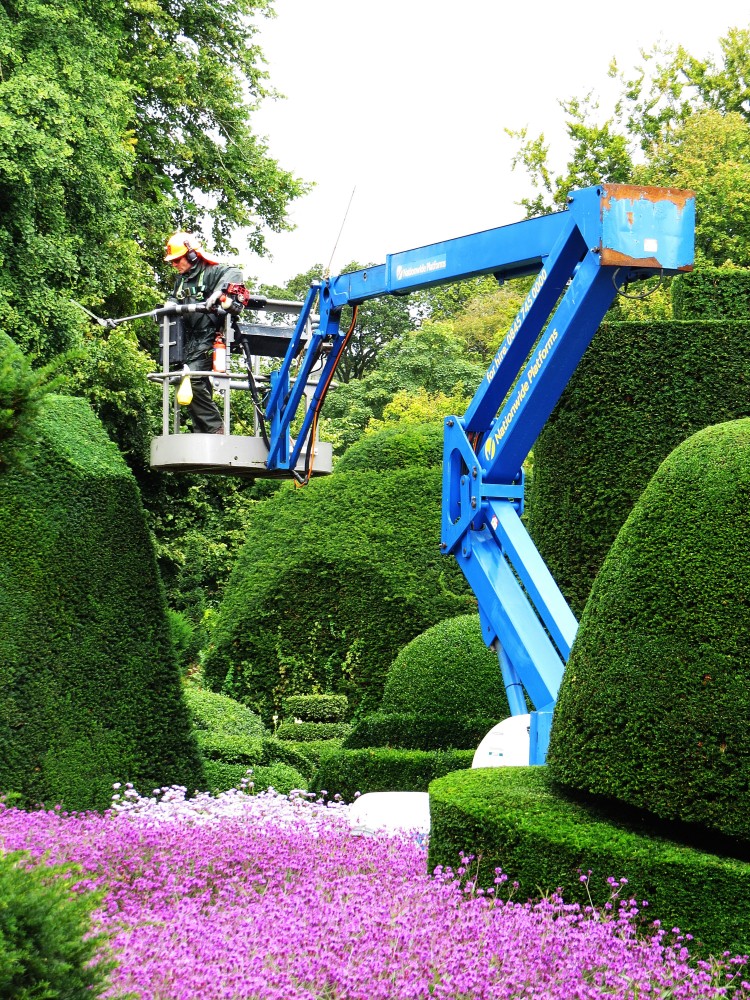 Levens Hall’s choice was not deliberate but one resulting from poverty, indifference and inertia. Thankfully, when the garden was restored in the early 19th century its ancient yews were not taken out but retained and cut and trained into weird playful shapes, golden yews being added to give contrasting colour and form. Illustrations from 1833 show it very much as it is today.

The resulting yew and box topiary resemble quirky and playful over-sized pieces of sculpture rather than the neat, tightly-clipped cones and pyramids envisaged by Beaumont. Unusually the parterres were also retained and are bedded out twice annually in stunning blocks of single colour that provide the garden with a sense of cohesion whilst not distracting from the topiary. Scarlet flame flower (tropaeolum speciosum) hangs in festoons from the clipped yew. 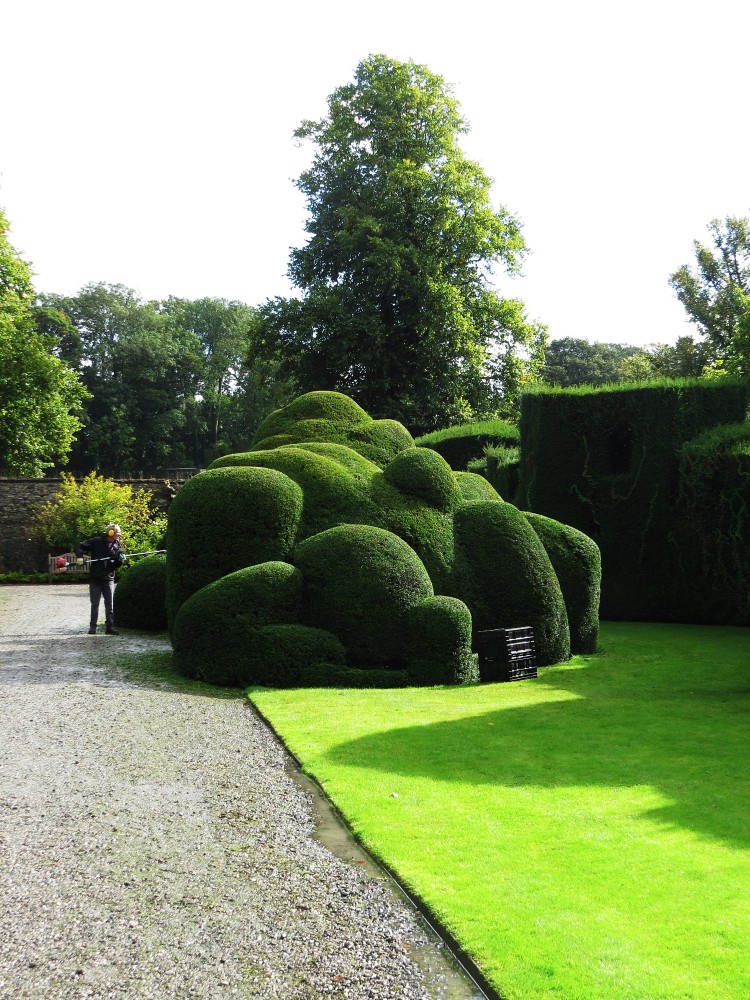 All this makes the garden a very intensive labour of love. The clipping of the topiary and the pruning of the ancient beech hedges elsewhere in the garden are major undertakings by the garden team that require using lightweight aluminium scaffold towers and cherry-pickers. Starting in August it is not finished until well after Christmas and in addition 15,000 bulbs and annuals are bedded out twice a year in the parterres. 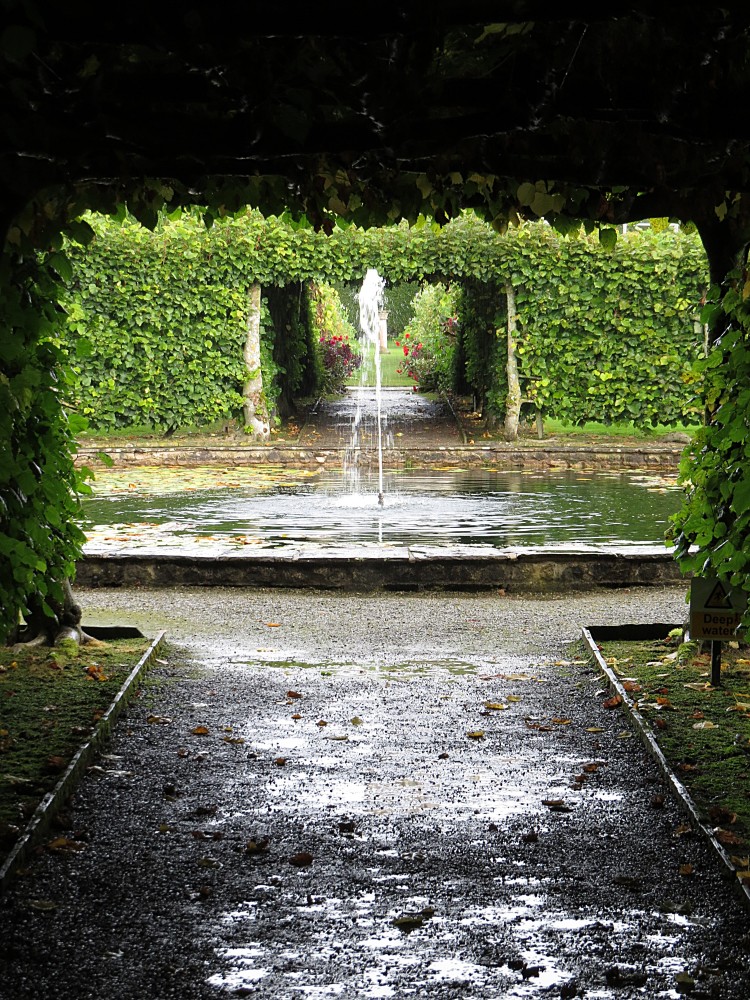 Other features of the garden are the 20th century reinstatements such as the Bowling Green rescued from vegetable production after the Second World War, and the Fountain Garden, a loose re-interpretation of what was there previously, on the site of the former tennis court. The ha-ha, believed to be the oldest in England survives, and helps drain the lower-lying parts of the gardens which are subject to frequent flooding. This was particularly severe in December 2015. The waterborne fungus, phytophora is lethal to yew, but Beaumont skilfully set The Topiary Garden above the level of the flood plain. Modern additions to the garden include the fine colour-coordinated herbaceous borders and The Rose Garden bedded out with David Austin shrub roses and edged in ilex crenata instead of traditional dwarf box. 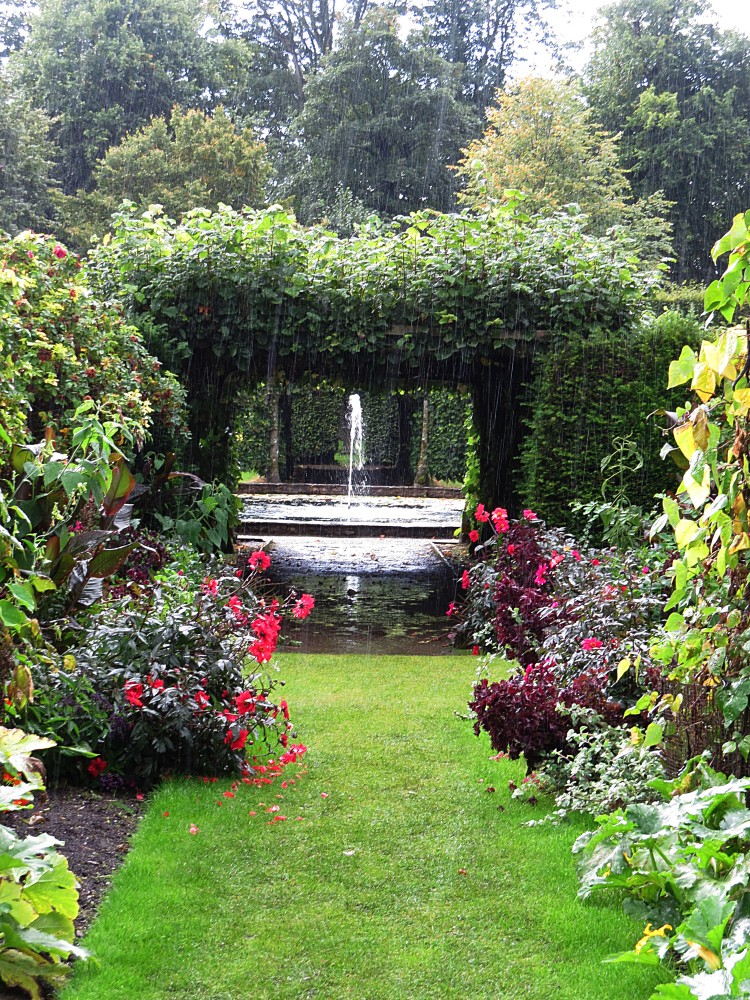 The key to the success of Levens Hall is the balance between the sense of continuity and the playfulness of its topiary, both things that tap into the psyche. It is, for me, as if the garden is trying to be serious but this irrepressible, boisterous child keeps bursting out. There is something joyful and fresh about this, evoking childhood memories but also set in a surreal Alice in Wonderland world. It is a garden that children truly adore, and this is something that Levens Hall has wisely capitalised upon by adding the Willow Labyrinth, a ‘Creepy-Crawly Corner’ and an exceptionally good play area. For many, happy children are the key to a good garden visit.

It could all have turned out so differently. The decision by Alexander Forbes, the head gardener to Levens Hall in the first half of the 19th century not to rip out the yew topiary was inspired. Equally, taking into account how easily yew regenerates he could have cut it savagely back .but by taking what was there and working with it he has bequeathed something remarkable – a garden that is solemn and serious but at the same time playful. It hardly matters that this is the oldest topiary garden in the world there is a joyful subversive quality about the place that is unique.