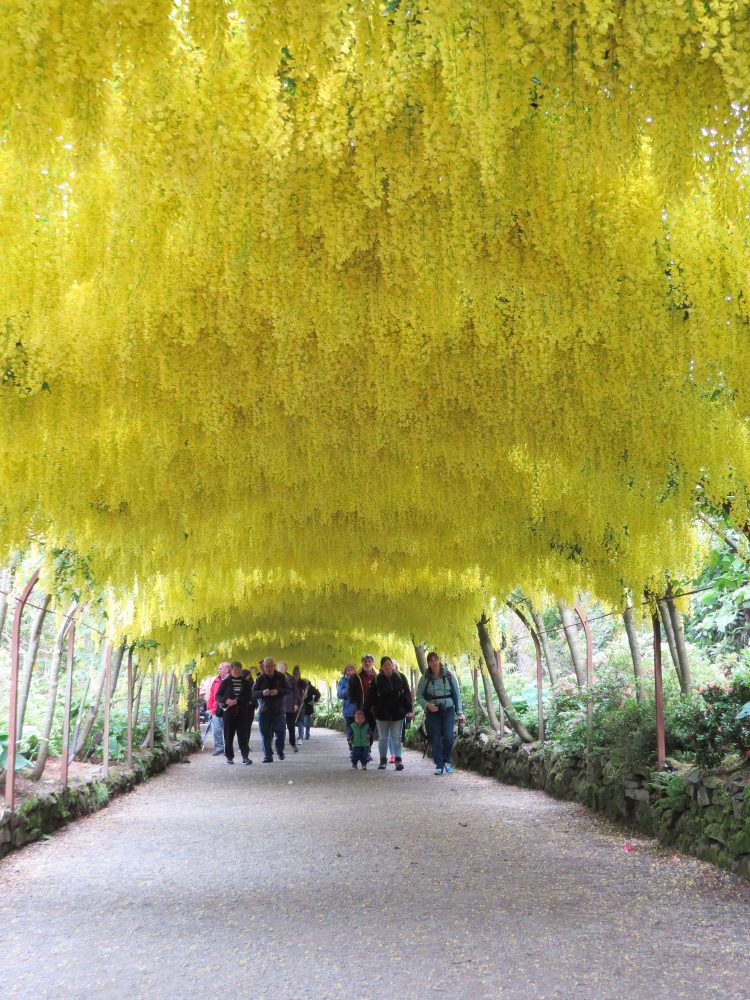 The many underwhelming gardens I have visited find themselves banished to the back corners of my mind. Some gardens, like Bodnant, refuse to go there yet irritate me so much that I have to write about them.

Bodnant has two wonderful advantages which should have made it one of Britain’s greatest and most memorable gardens; its spectacular view from the house to the mountains of Snowdonia, and to one side, a steep and dramatic ravine with a stream tumbling over rocks and boulders down to a river and an old mill. 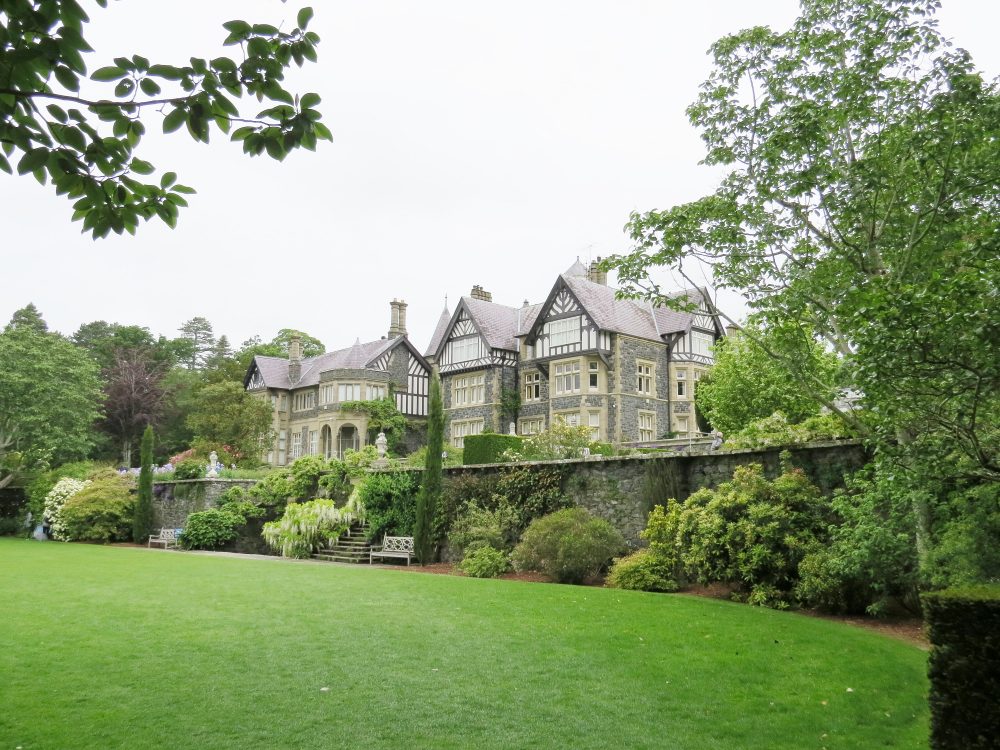 The House and Croquet Terrace

The Bodnant estate was bought in the 1870s by Henry Pochin, a successful industrial chemist and entrepreneur, who rebuilt the Georgian house as a blue granite baronial mansion with half-timbered eaves that wouldn’t have looked out of place in the Surrey stockbroker belt. His daughter Laura inherited the family fortune and her politician husband, Charles, was elevated into the peerage in 1911, as the 1st Lord Aberconway, consolidating the family’s new social position. Throughout much of the 20th century the Aberconways were to make an outstanding contribution to both horticulture and preservation of the great gardens of Britain. 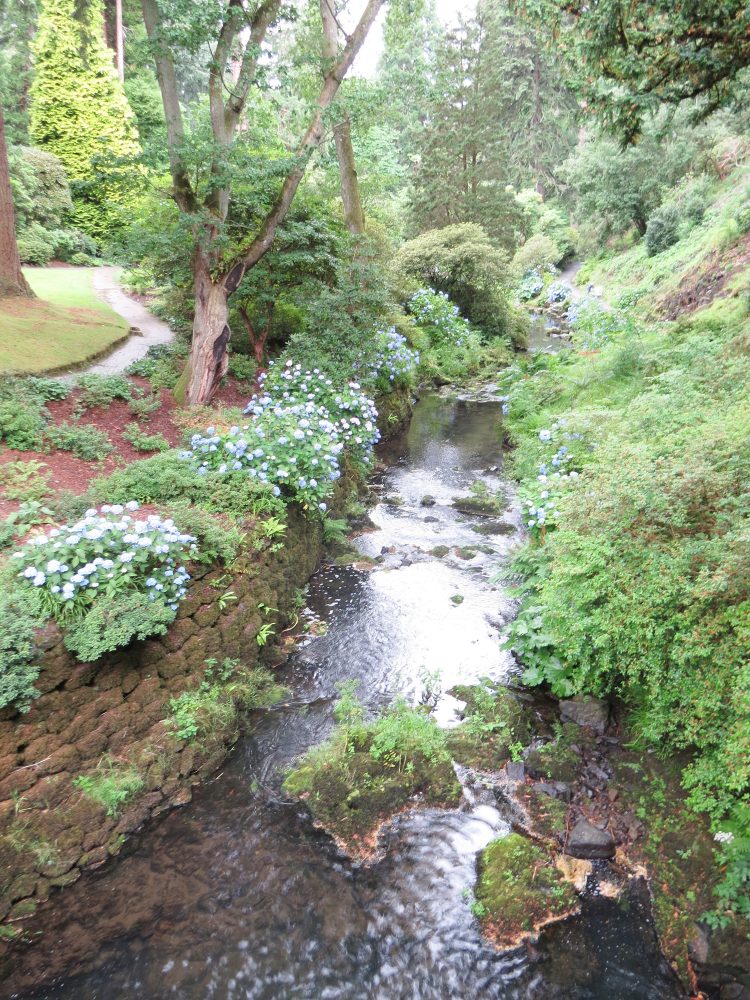 Hydrangeas and Lawns to The Dell

Laura’s son Henry, who was eventually to become the 2nd Lord Aberconway, sponsored several plant-hunting exhibitions to the Himalayas and China and was responsible for the breeding of many new rhododendron cultivars and other shrubs and trees at Bodnant. He also designed the terraces in front of the house in a grand Edwardian style (more on that later) and served as President of the Royal Horticultural Society, overseeing its development as a great national institution. Furthermore, he persuaded the National Trust to accept for preservation great gardens on their own merit (such as Hidcote and Sissinghurst), thus ensuring their survival.

His son, Charles, 3rd Lord Aberconway, continued the family tradition of interest in horticulture, became president of the RHS from 1961-84, and his tenacious character was largely responsible for making the Chelsea Flower Show a world-class event. 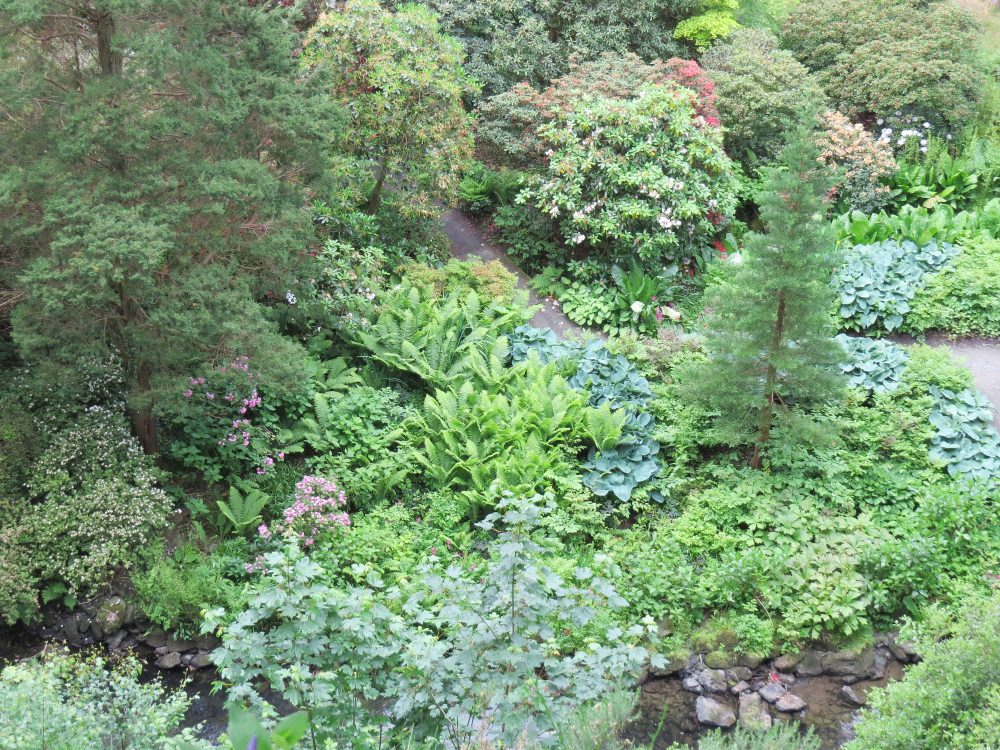 Mass Planting in The Dell

Bodnant is above all a horticulturist’s garden, where all attention is directed to the plants. As a garden designer my interest is in an overall concept and structure providing a framework for stylish planting. I want to grab this garden by the scruff of its neck and give it a good shaking up.

Its great claim to fame is as a spring garden. Its stupendous collection of rhododendrons is wonderful for one month but for the remaining eleven months their dull foliage and lumpy shapes don’t add much to the garden. The pines planted by Henry Pochin have grown to maturity and Bodnant boasts 28 nationally important champion trees. Many of these are American conifers that seem out of scale to a British landscape and remind me of the dripping and depressing forests of the American North West. 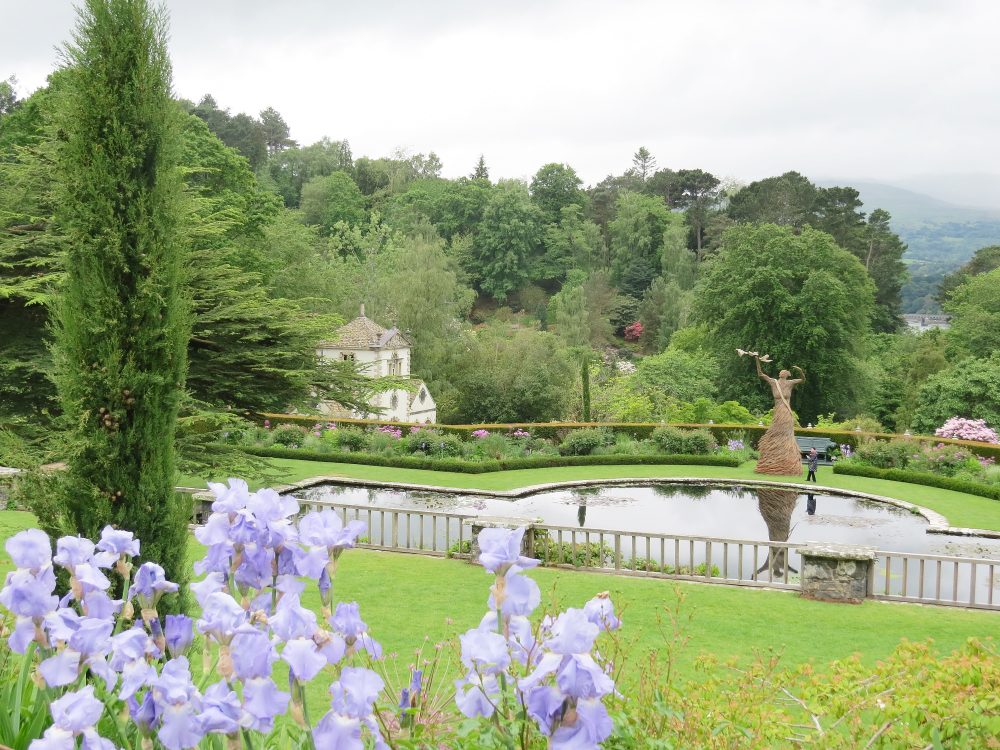 The View from the Upper Rose Terrace over the Croquet, Lily and Lower Terraces

These two collections are well-represented in The Dell, that spectacular ravine alluded to earlier, heavily shaded by its largely evergreen tree canopy. This is an impressive landscape with a natural sense of drama emasculated by neatly edged lawns and incongruous planting of large beds of hostas, astilbes and ferns, blue-flowered lacecap and mophead hydrangeas. It looks like an over-sized suburban garden. Far better would have been a broad mix of shade-loving perennial native plants, bulbs, wild flowers and rough grass, that would complement the natural landscape. 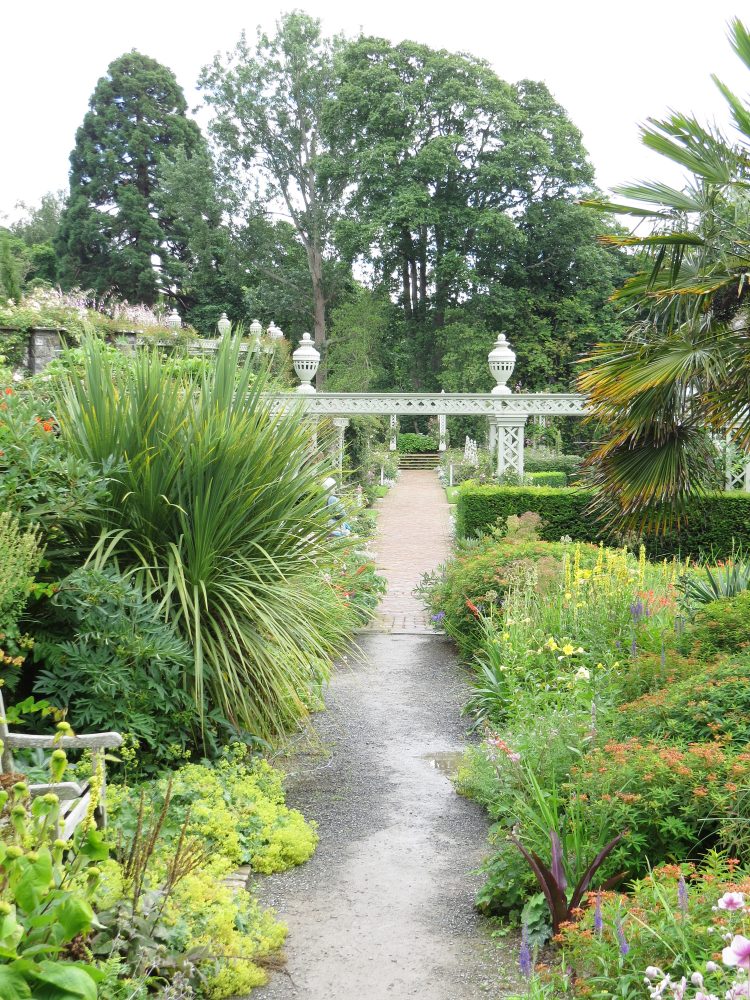 Towards the Lower Rose Terrace

The early 20th century is famous for its great Arts and Craft inspired gardens and there was no shortage of talented designers, amongst them Edwin Lutyens, Harold Peto, and Robert Lorimer. But Henry, 2nd Lord Aberconway, chose to personally design and supervise the construction of the grand garden terraces that fall away from the house. A single terrace with sweeping lawns down to a ha-ha and the wonderful view to distant Snowdonia would have made a fabulous setting for the house, with a series of more intimate garden rooms tucked to one side. Or a single grand formal Italianate terrace overlooking that view (such as Cliveden or Blenheim). Bodnant has five completely different over-sized terraces; an Upper Rose Terrace, a Croquet Terrace, Lily Terrace, Lower Rose Terrace, and Canal Terrace whilst mature park trees partially obscure the distant views. The result is an incoherent mess linked together with extensive and very classy Edwardian pergolas covered with roses and wisteria. 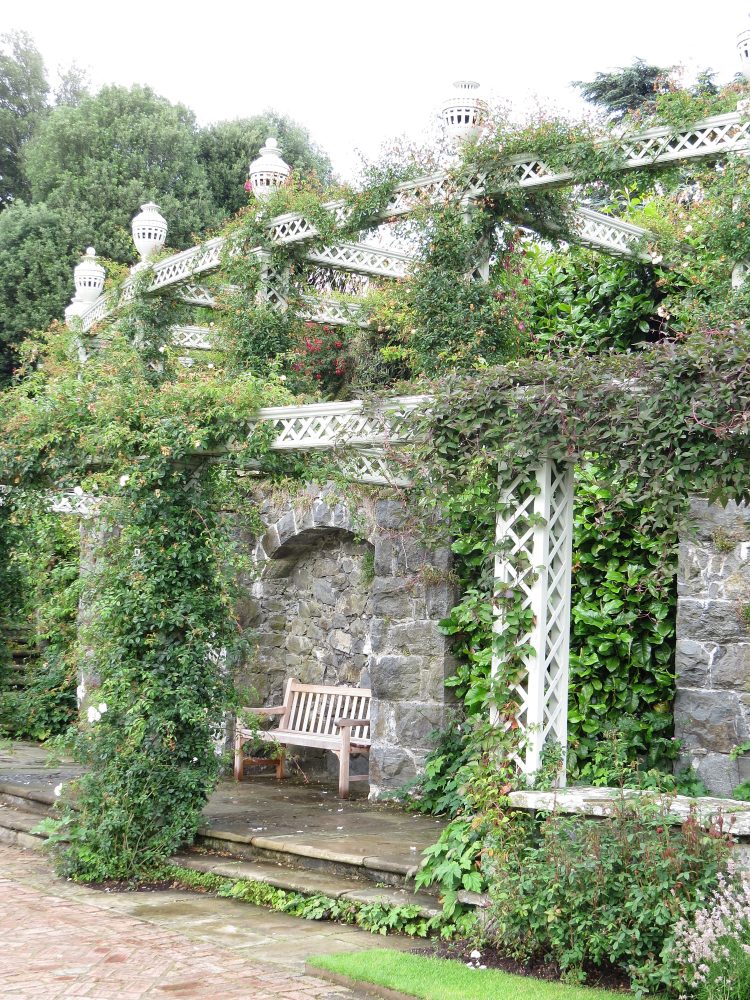 The National Trust have the resources, talent and experience to provide a very high standard of planting for summer and autumn interest and are not adverse to making changes in their gardens. Bodnant is good, but the bar is set very high, and it really doesn’t excel apart its stupendous tunnel of laburnum vossii, some 55m (180’) long. 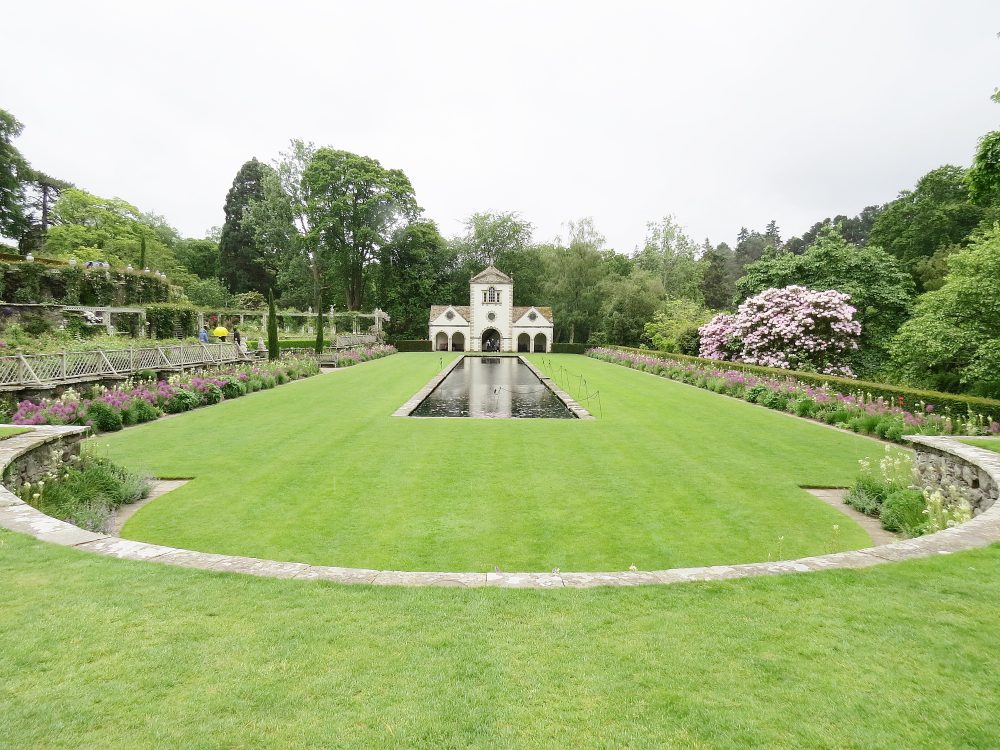 The Pin Mill and Canal Terrace

Bodnant, they claim, is ‘one of the world’s most magical gardens…..…it will capture your heart and live in your memory.’ It doesn’t live up to their ad man’s dream.