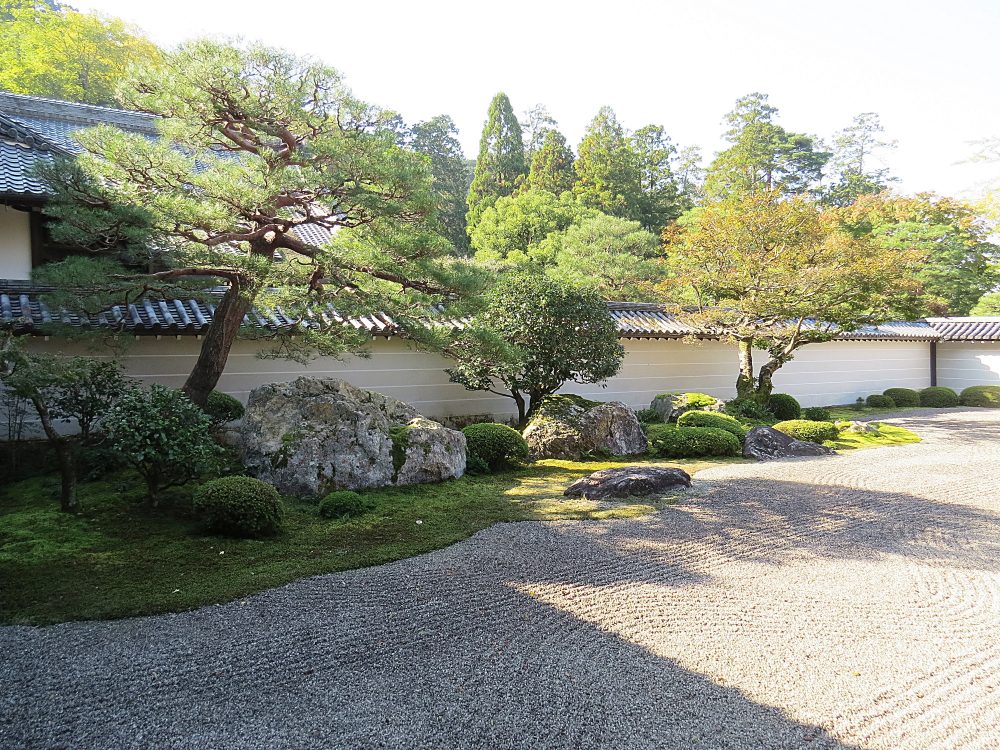 The Zen Dry Garden at Nanzen-ji

It would be as difficult to write about St. Peter’s in Rome without mentioning the Catholic Church, as it is to write about Nanzen-ji without considering the Rinzai School of Zen. The Rinzai is one of the two main schools of Zen and as the traditional Japanese saying goes ‘Rinzai for the Shogun, Soto for the peasants’. 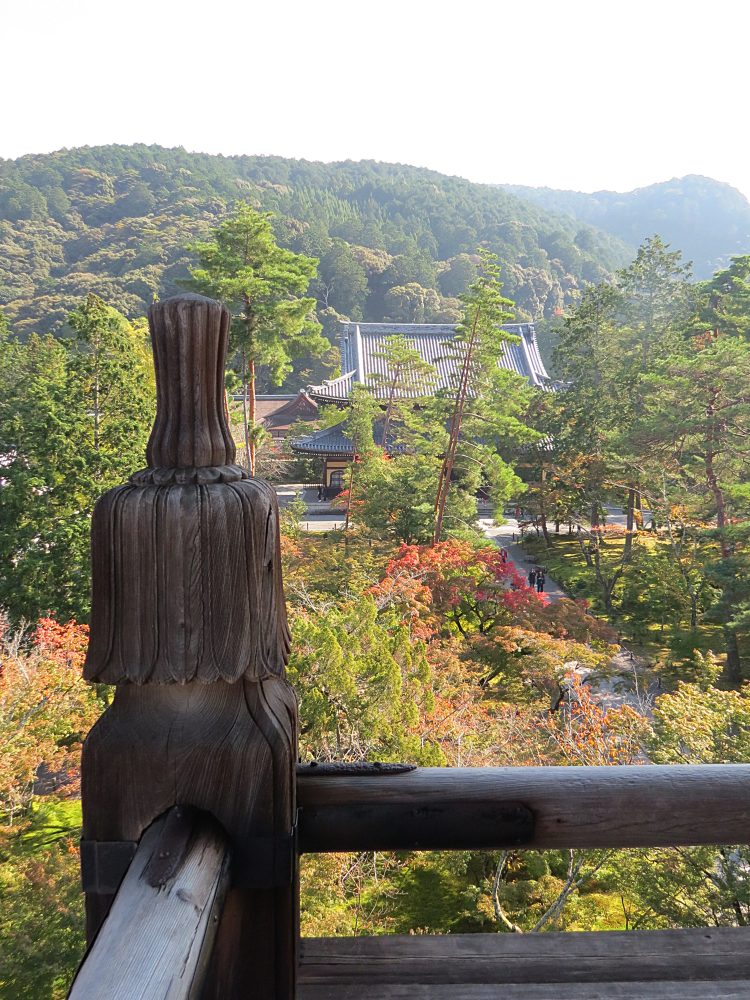 The View from the Roof of the Sanmon Gate

The underlying concept of Buddhism is that the material world and self are illusions. The Rinzai School was established in 1187 by a Japanese monk who had spent much of his life in China, and it coincided with the rise of the newly ascendant Japanese warrior class, the samurai, to whom the strong rigorous discipline and severity of its training methods were appealing. Unlike Soto which is a gentler form of Zen, popular with the merchant class and which emphasises seated meditation, the emphasis in Rinzai is on seeking one’s own true nature through many years of training using koans (questions used to provoke doubt) as a means to enlightenment. 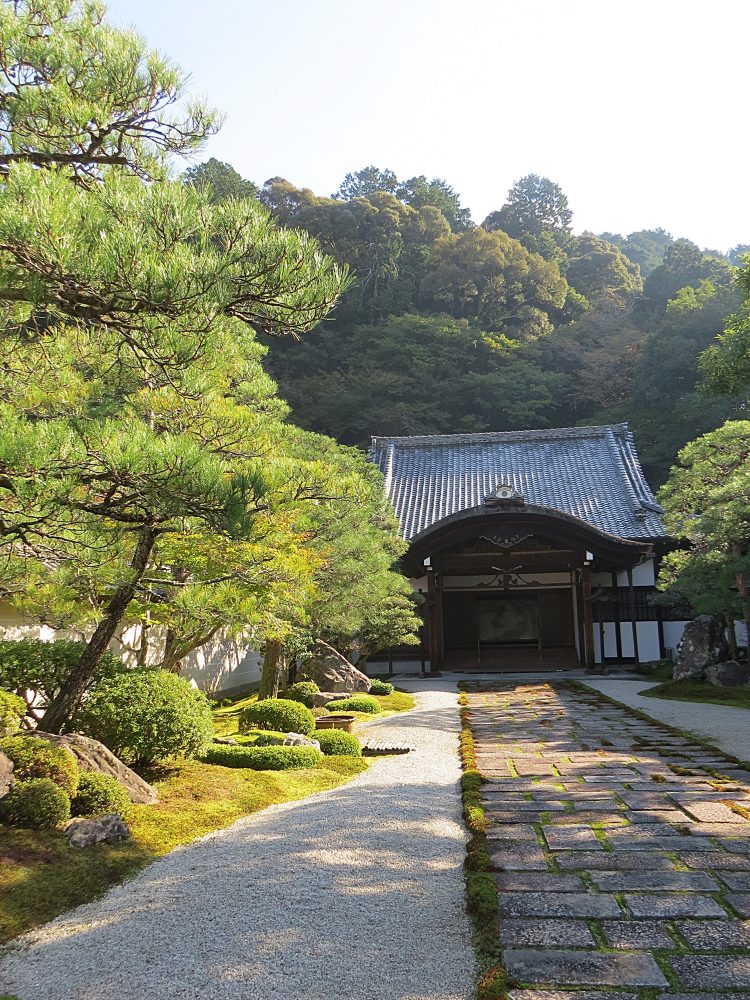 The Main Approach to the Temple

It was in 1264 that Emperor Kamayama built his villa in the wooded foothills of the Higashiyama Mountains and later, after training as a novice of the Rinzai School, he became a monk-emperor and donated the villa as a Zen temple in 1291.  The patronage of the ruling elite saw a flowering of distinctly Japanese culture in the five decades after Emperor Kamayama’s death and the Zen temple that he established at Nanzen-ji became the chief temple of the school, controlling the five great temples of Kyoto and five more in the former capital of Kamakura. This became known as the ‘Five Mountain System’ which was administered by central government, giving effective state control through the temples over local affairs. It remains one of the most important Buddhist temples in Japan. 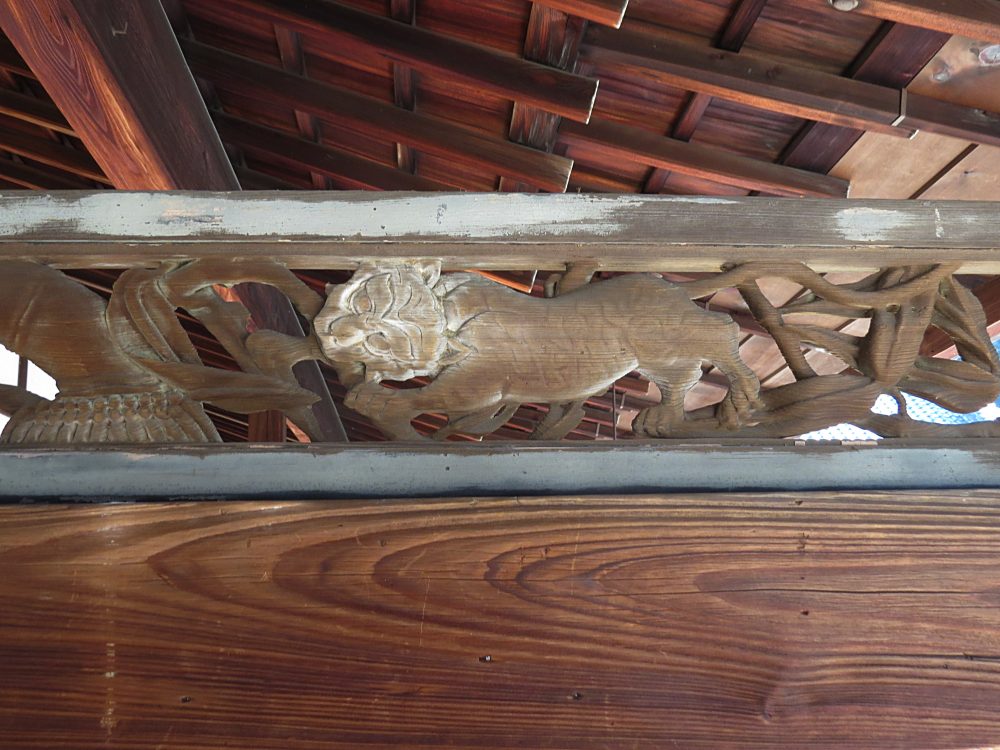 The temple is approached through the main gate (Sanmon), an impressive three storey building constructed in 1628 in memory of those killed in the civil war, and which offers spectacular views over the surrounding countryside from the roof. A calm and stylish straight avenue leads to the main temple, with cloud-pruned pines, rocks and moss banks to each side, like an undulating shoreline to the sea of gravel, whilst in the centre is a broad path of granite slabs with moss-filled joints.

Since the temple was established it has been destroyed by fire three times and the main building (Dai-hojo), the living quarters of the Zen master, was moved here from Kyoto’s Imperial Palace in 1611. The approach is through the typical Zen study (shoin), and above the entrance to a wide dimly-lit corridor is the wonderful saying by Daimin the first Zen master of the temple:

‘Do not let past troubles catch in your mind, nor future fears.
Live in this moment, this place, in pure mind without regret, and each day will be a good life’.

The corridor leads on to the verandah which is built so that support columns do not obstruct the view. The garden is believed to have been constructed by the renowned landscape artist Kobori Enshu in around 1600. 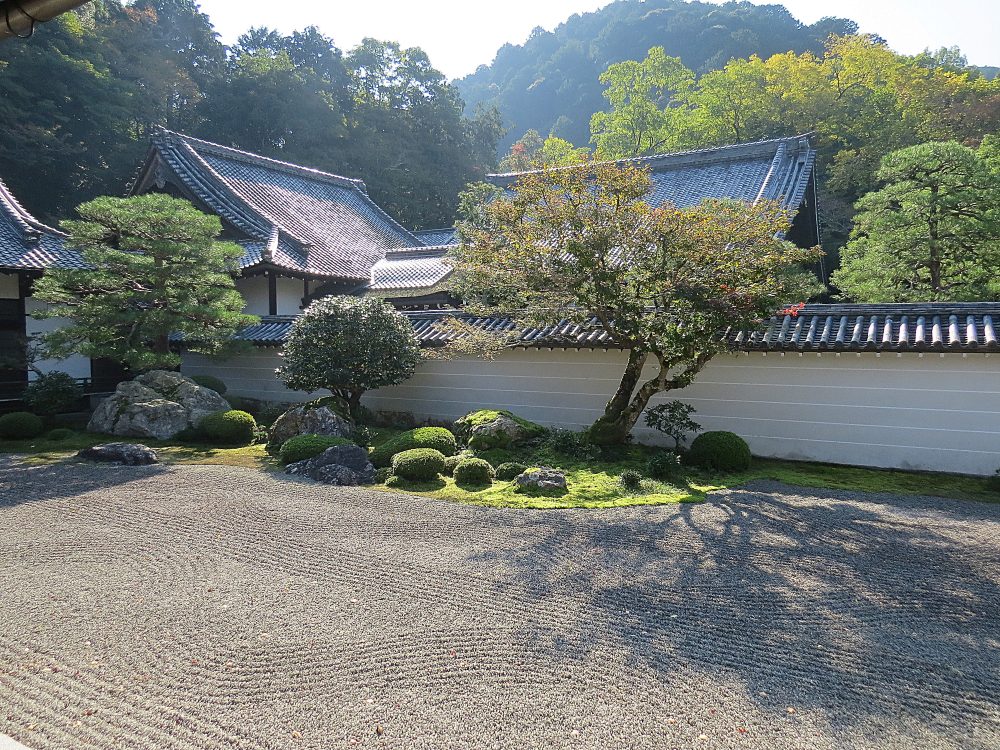 The Dry Garden with Borrowed Scenery of the Mountains

A good Zen dry garden is designed to startle the mind into a more spiritual state. The composition of raked gravel and rocks at Nansen-ji certainly does this, set as it is in the verdant greenery of the spectacularly beautiful mountain foothills. Like all Zen gardens it is designed as a three-dimensional picture to free the mind from thought, although never revealing everything from one seated position. The temptation to associate meanings and interpretations with the garden is irresistible and it is sometimes named ‘Young Tigers Crossing a River’, after a famous koan. There is a wonderful carved ceiling joist of a tiger that has encouraged this interpretation. 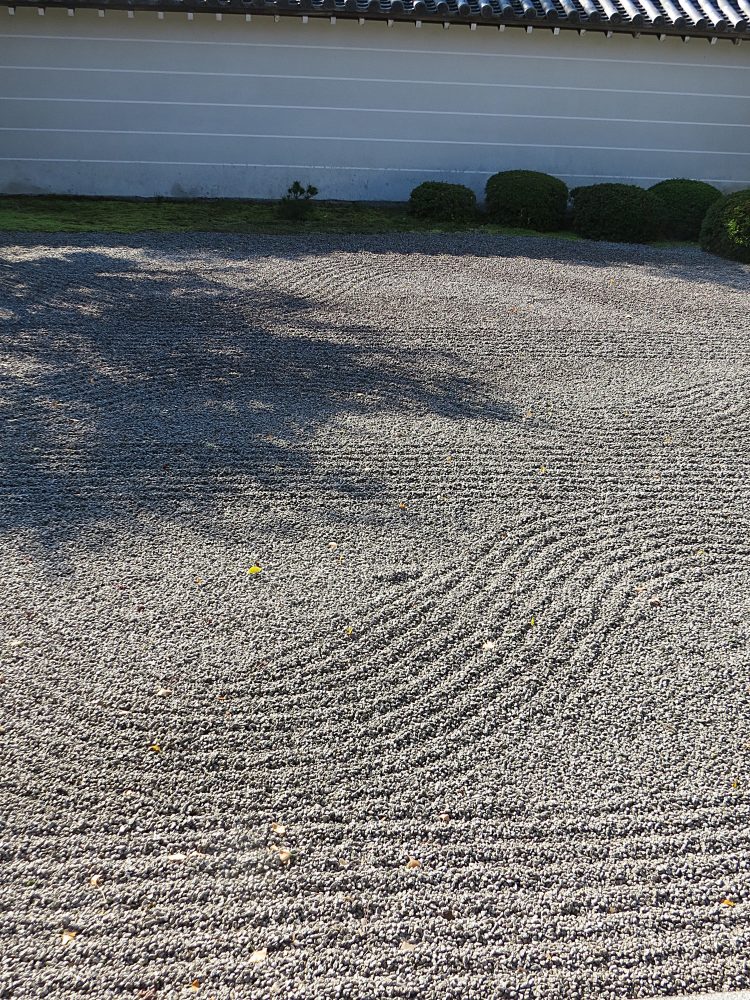 The underlying principle of Japanese garden design is to express the passage of time and the impermanence of all things, a concept known as ‘wabi sabi’, the worship and seeking of ‘imperfect perfection’.   Simplicity, minimalism and understatement are key concepts, expressed in asymmetrical design (unlike Western gardens of this period), and old and worn materials are highly prized; pines included to symbolise longevity, bamboos vigour, and old trees pruned back to expose their underlying character. At Nanzen-ji, the borrowed scenery of the adjoining mountains harmonises with the composition to produce a garden of great simplicity and refinement. 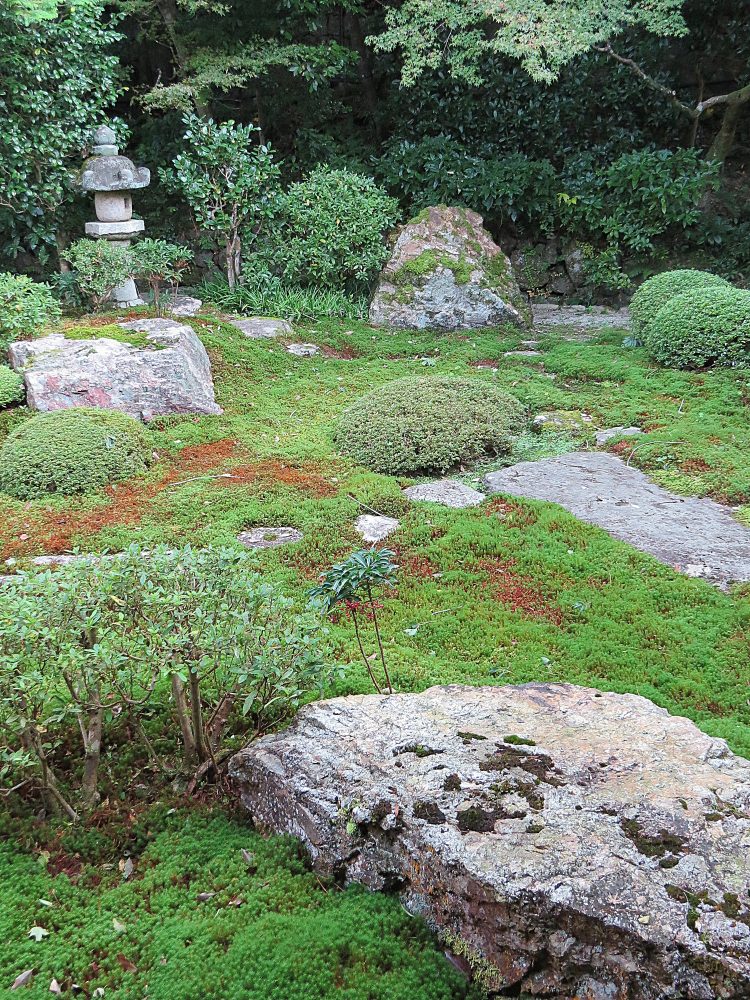 Adjacent to the Zen dry garden is the pond garden which reflects the taste of the aristocratic elite that patronised Rinzai, but to my mind, beset as it is with Western values, it lacks the carefully composed views and taut dynamism that I associate with Japanese stroll gardens.

The Zen dry garden at Nanzen-ji has the advantage of the spectacular borrowed scenery of the wooded mountainsides and whilst very good, does not have the spiritual quality of Ryoan-ji which is the yardstick against which all Zen dry gardens are measured. Nevertheless, along with the many stunning superbly crafted sub-temples, it is as essential a visit in Kyoto as St. Peter’s is in Rome.