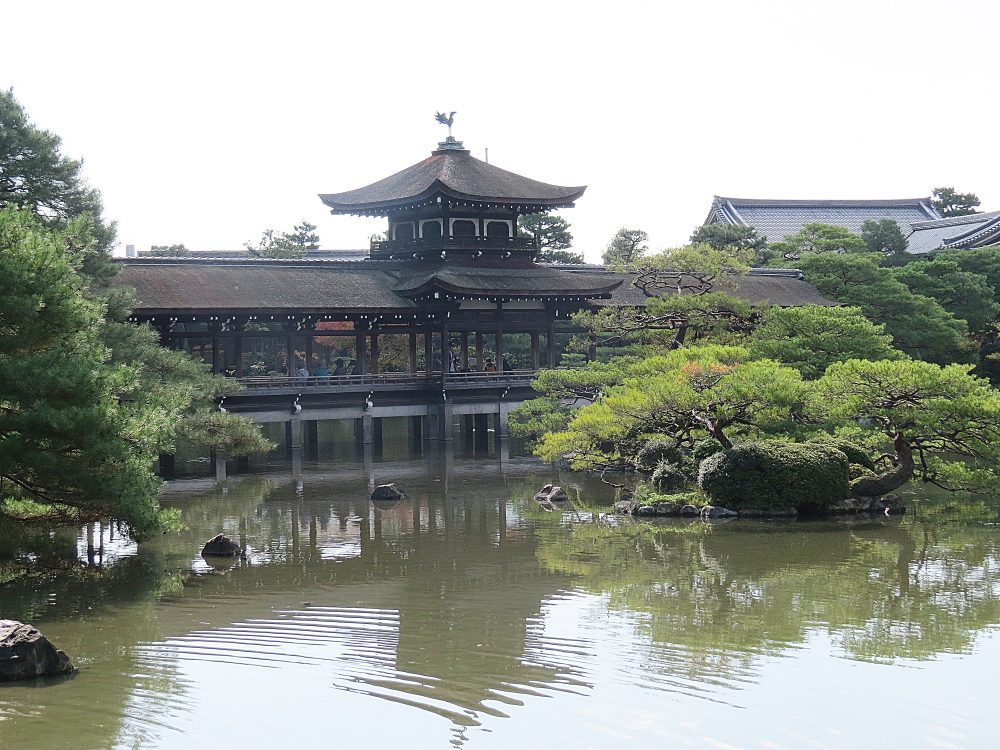 View Over the Pond to the Taiheikaku (Covered Bridge)

The Heian-ji is something of an oddity on two accounts, firstly being a Shinto shrine of the late 19th century Meiji period and one of the newest shrines in Japan, but also (and unusually for a shrine) having a stroll garden. 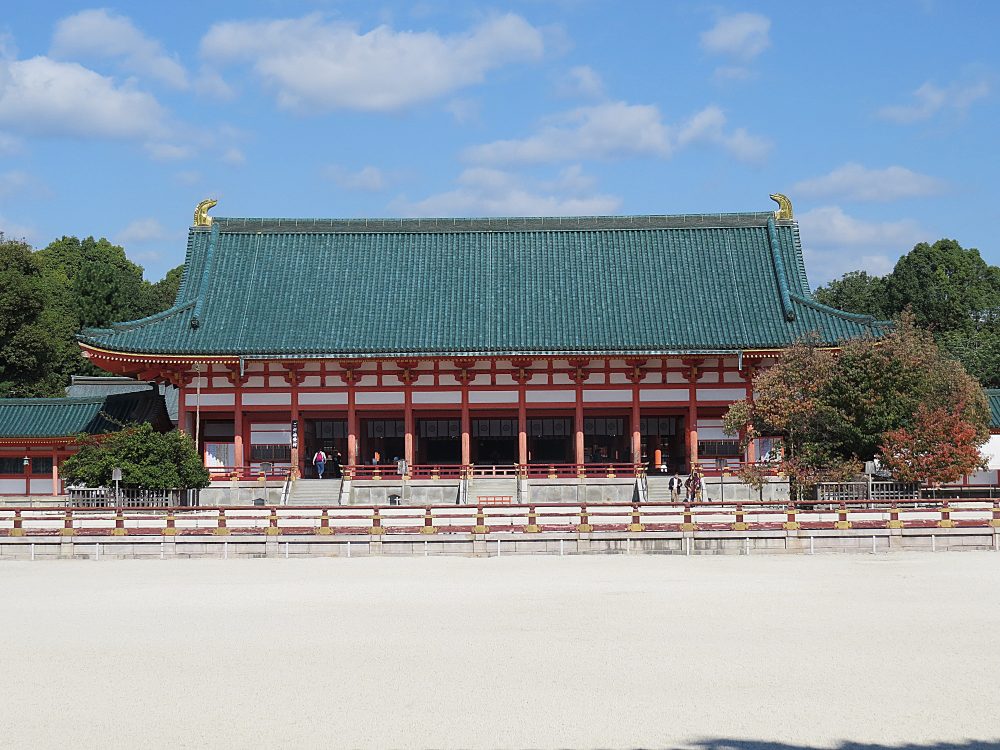 When the 17 year old emperor Meiji instigated a coup d’etat in 1868 supported by a group of young visionary samurai, he overthrew the Tokugawa shogunate ‘stuffed with wooden monkeys,’ and moved the capital from Kyoto to Edo (Tokyo).  Over the next forty years Japan went through the rapid and at times painful transition from a closed feudal society to an industrialised world power with colonies in Taiwan, Korea and Manchuria. As one Tokyo resident put it, he felt ‘he had been alive for 400 years.’ The status of the educated aristocratic samurai class, that made up two of Japan’s thirty million population was abolished and national conscription and the adoption of western military technology meant rebellions were easily crushed. Many samurai found employment in the new centralised state bureaucracy and the military, and the customs and traditions that stood in the way of Japan becoming a modern nation were discarded. 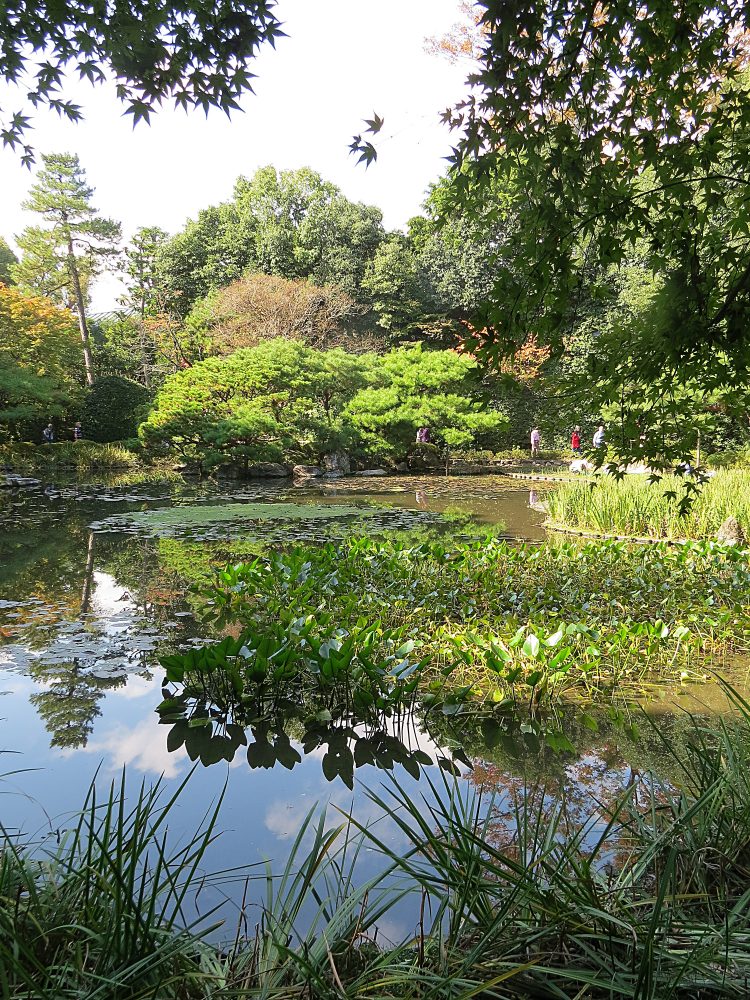 It had been the psychological shock of the ‘black ships’ in 1853 that spelt the end of the shogunate, when the American Commodore Matthew Perry steamed into Tokyo Bay in his steel warships and demanded that Japan open up to western trade. He was prepared to back up his demands with advanced firepower. Many believed that to resist foreign colonisation they must revive the ‘unique spirit of the Japanese people.’ An early slogan of the Meiji government was fukoku kyohei (rich country, strong army) and the emperor was made sovereign and Shinto high priest of an autocratic militaristic state. 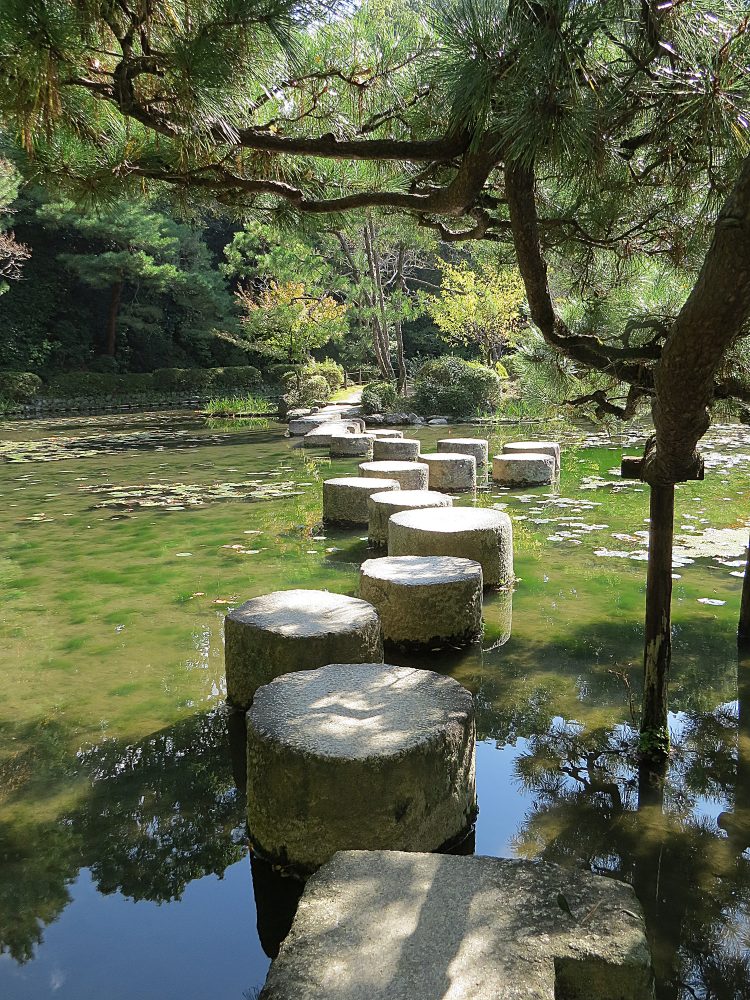 Shinto (the way of the gods) is the ethnic religion of the Japanese people, pre-dating Buddhism, and centres on ritual practices to establish a connection between present day Japan and its ancient roots. Believing that divinity manifests itself in many forms (rocks, trees, animals, places and people), it sits comfortably with Japan’s Zen Buddhist traditions. 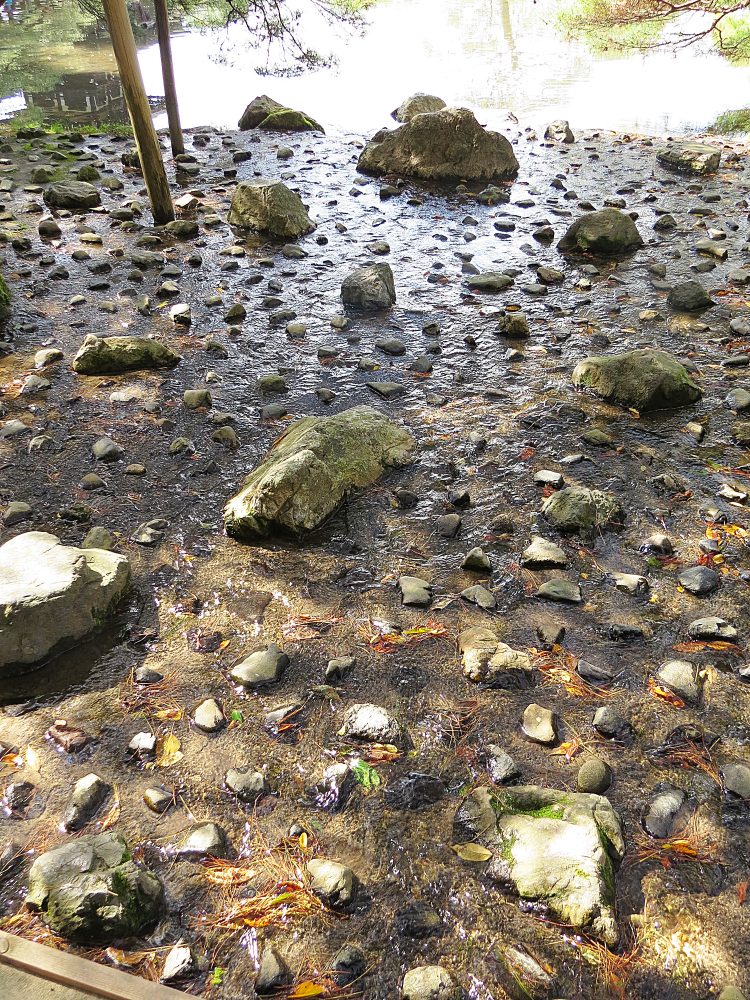 It was against the background of this nationalistic revival of Shinto that the Heian shrine was dedicated in 1895, to coincide with the industrial exposition and fair held in Kyoto in that year, and the 1100th anniversary of the establishment of the capital in Kyoto (the Heian-yo). The shrine with its vermilion coloured woodwork and green tiled roof is approached through a magnificent torii gate opening up into a very grand courtyard and is one of the most important shrines in Japan. The style and features closely resemble the 11th and 12th century Kyoto Imperial Palace, although somewhat oddly it has been built to 5/8ths scale of the original size. Heian-ji is a popular shrine especially for weddings held in a special hall to the east of the courtyard, but also to ask for blessings for new borns, for children at the ages of 3,5 and 7 years of age and for young couples. 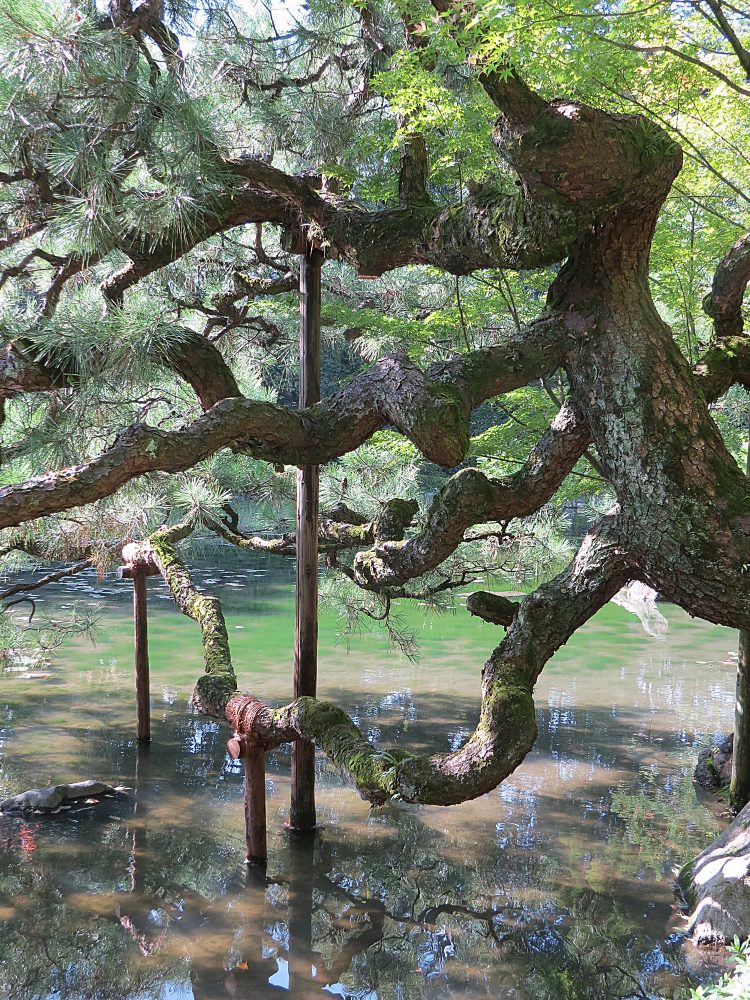 The stroll garden by Ogawa Jihei, Kyoto’s foremost 19th century garden designer, is a not entirely successful blend of contemporary and ancient aesthetics, using large quantities of flowering plants and trees in a traditional setting.

On entering the garden from the courtyard, paths first wind through the large Drooping Cherry Tree Garden (Minami shin’en), which in April has a stunning display of deep pink blossom, and then through to the first pond garden (Nishi shin’em) past azaleas and long-stemmed iris flowering in May and early June. 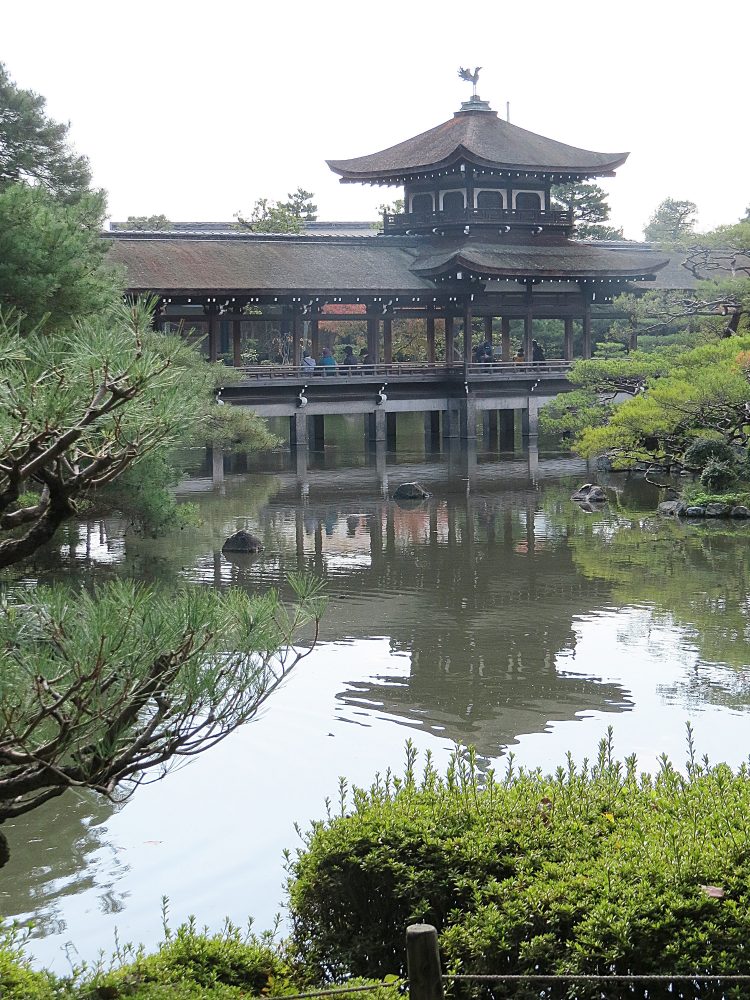 This leads in turn to the second pond garden (Naka shin’em) where late flowering azaleas and mass planting of iris laevigata (Japanese or rabbit-eared iris) are at their best in June. Circular ‘tail of the dragon’ stepping stones cross over to a small island past water lilies and the path continues around the edge of the pond to the Taihei-kaku, a beautiful covered wooden bridge that was moved to this location from a former Imperial palace. Views over the pond are to the guest house and this particular garden area (Higashi shin’en) is renowned for the autumn colour of its maples. 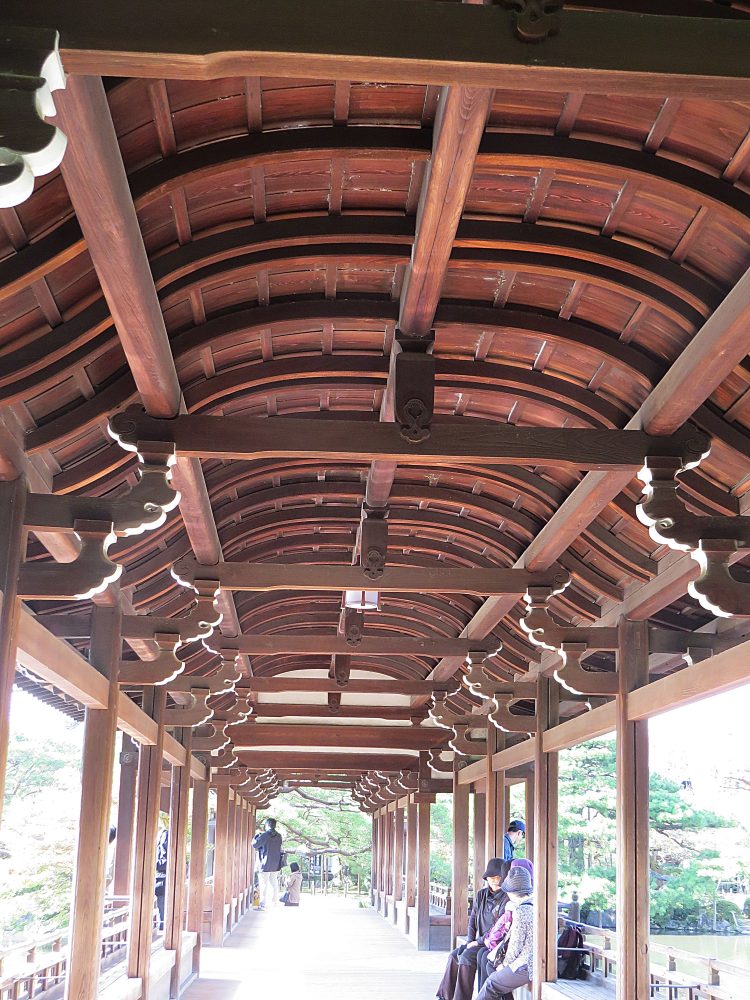 After visiting many 17th century strongly structured Japanese gardens, the informality and looseness of the planting at Heian-ji comes as something of a surprise and a disappointment as the sequential planting means that a succession of areas of the garden are spectacularly beautiful for comparatively short periods of time throughout the year. However, the disappointment of the planting was largely offset by the wonderful and at times breath-taking attention to detail such as the carefully composed pebble-strewn inflow stream to the second pond, and the wonderful traditional pruning of the trees.

Heian-ji’s stroll garden is an important transition to modernity in Japanese  design, and celebrates the fleeting impermanence of all things in its transitory planting, but to the Western eye lacks the unique qualities that make Japanese gardens so memorable.