I do like a good party, and my visit to Marrakech was nothing to do with gardens. Things got off to an inauspicious start – a flurry of rumours, and then the pilot announced that a bomb had gone off in Jemaa el Fna, the main square. We took off, after off-loading a few American cowardy-custards and their bags, but if things were to deteriorate we would refuel and come home. 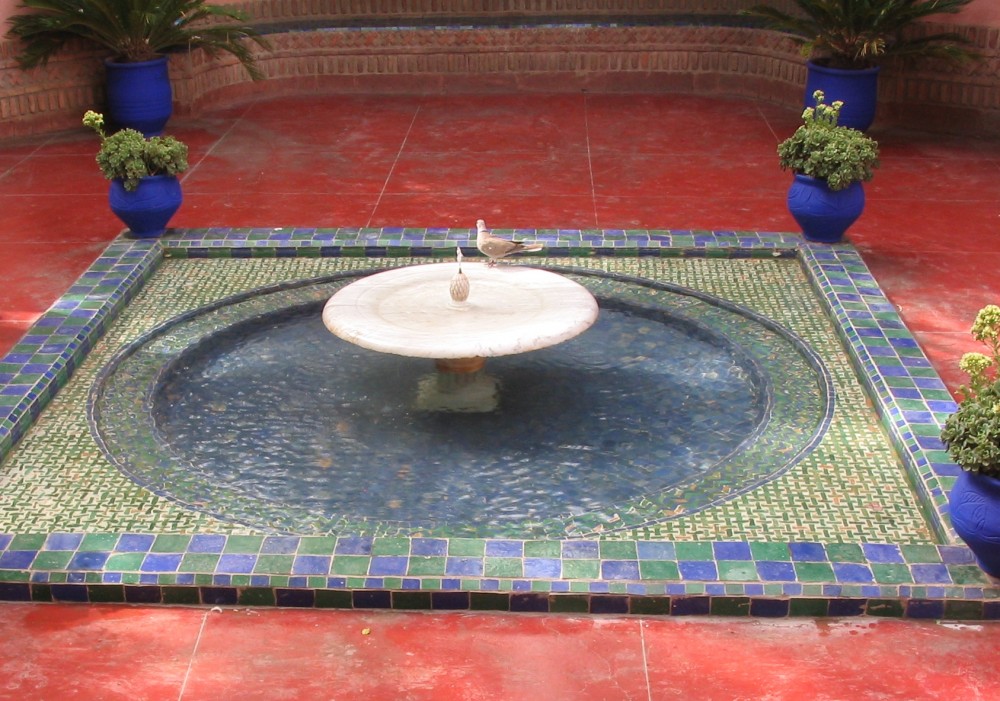 For me, Marrakesh is an enticingly exotic place. The smart hotels, good restaurants and resorts are there if you want a break from the Medina, with its riads, medieval dye works, camels’ heads on butcher’s stalls, jostling crowds, snake charmers and tourist traps, but it is also a wonderfully romantic city, set against the snow-capped Atlas Mountains, with the Sahara less than three hours away. 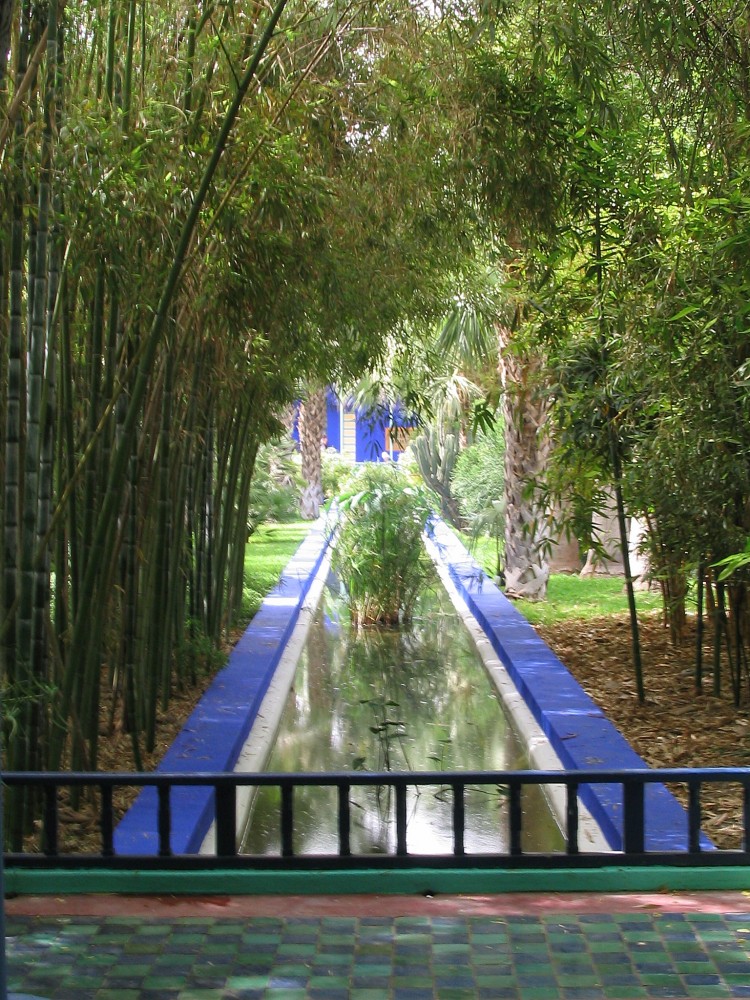 Marjorelle, like many French orientalists moved here in the 1920s, soon after it became a French protectorate, and it was in El Hassania, one of the new suburbs of the European-style Ville Nouvelle that he settled, and built himself a house and artist’s studio in an eclectic Art Deco style; but it is his garden for which he is remembered. 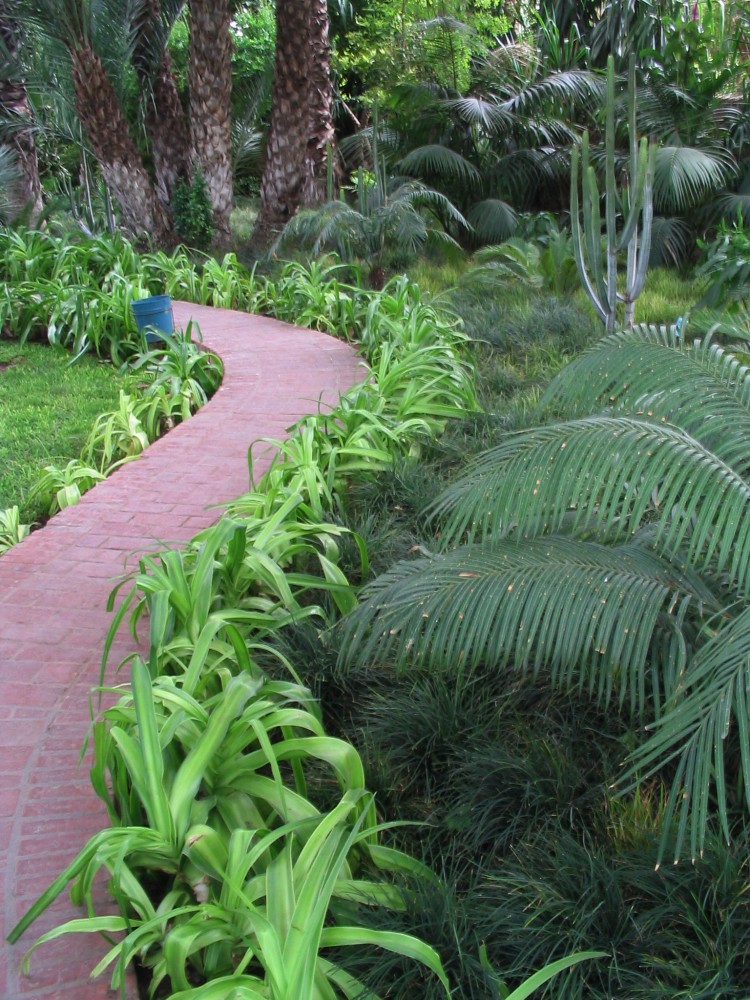 Path to the palm grove

I don’t think the famous ‘Marjorelle Blue’ works in the gloom and watery sun of Northern Europe, but here, the fabulous light makes in zing. The colour is everywhere, on pots, the walls to the Art Deco studio, edgings to pools and set against the lush green foliage. 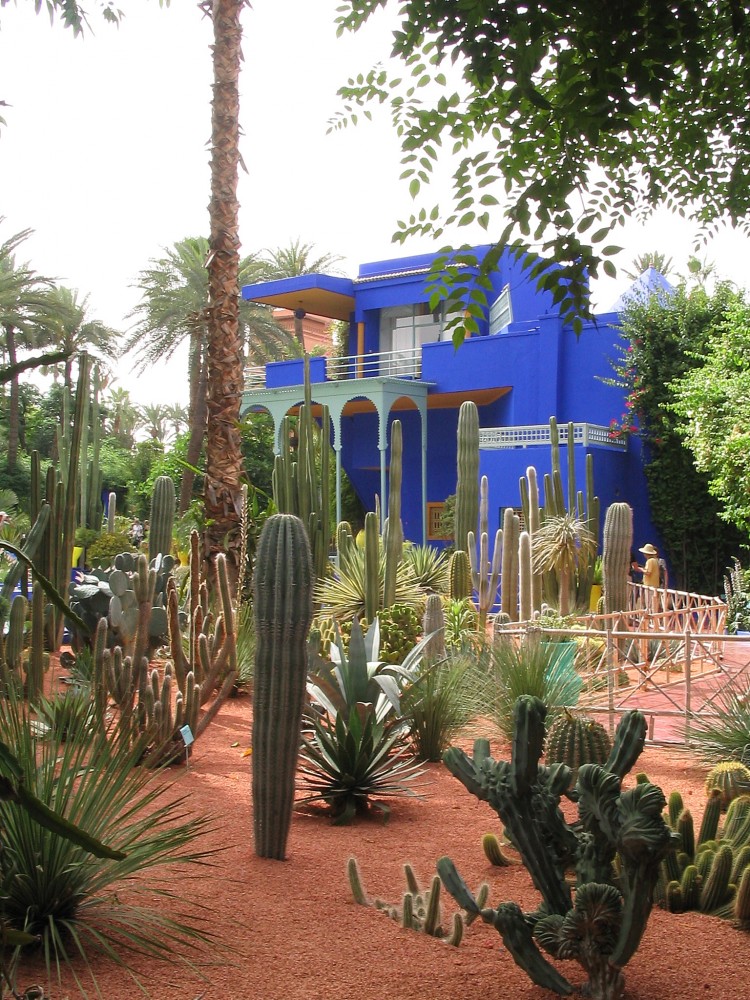 Marjorelle transformed his palm grove into a botanical garden, importing cacti from the deserts of North America, succulents from South Africa, and rare species from Asia, all set out with an artist’s eye. The sculptural contrast in size and shape, set against the spiky algaves in a mulch of pink crushed gravel is simply stunning; especially against the backdrop of the bright cobalt blue studio. 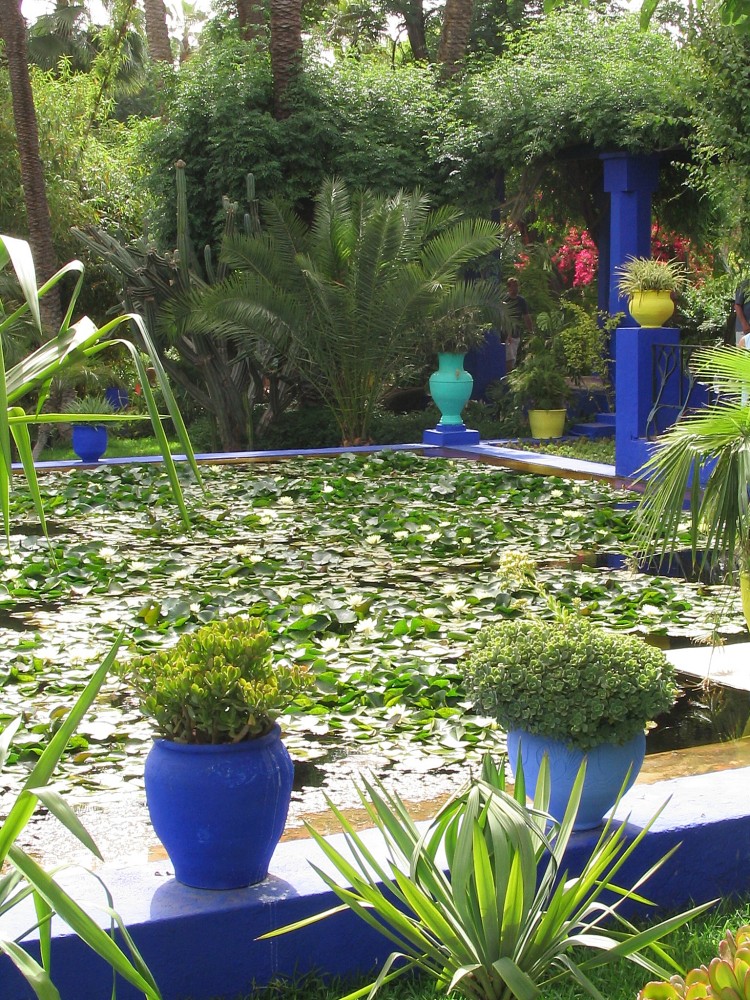 The central feature of the garden is a large calm raised water basin, brimming with lotus and water lilies, and hiding koi carp and scuttling terrapins. Strangely, I was reminded of Monet’s water garden at Giverny; I think it must be because both were set out with a painter’s eye, but here re-interpreted in a lush exotic setting. 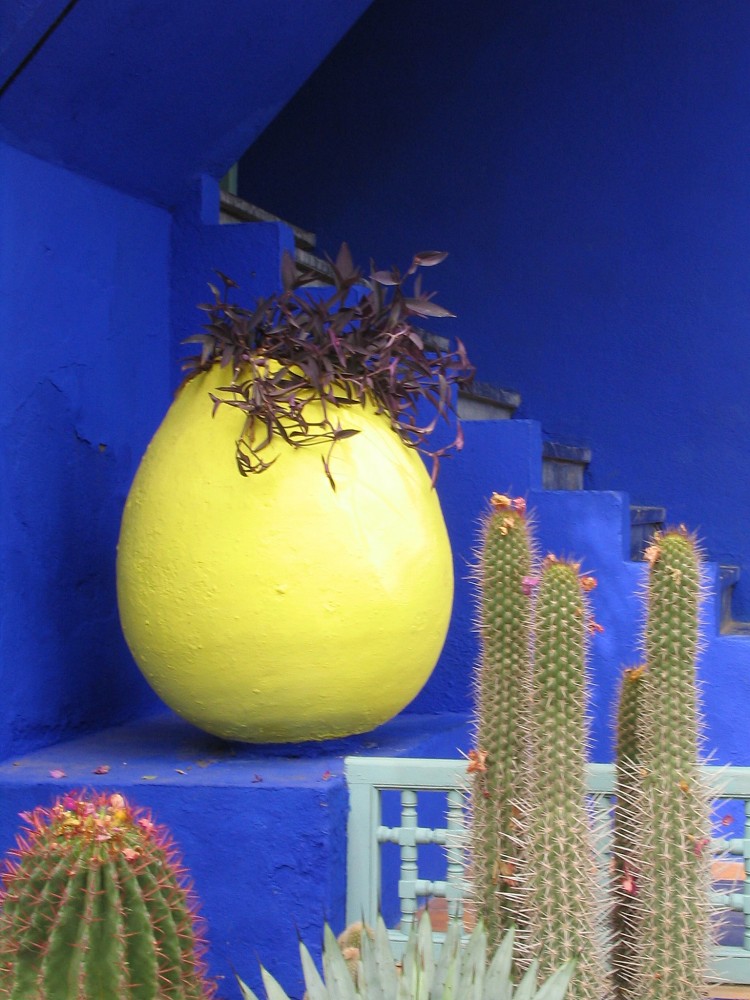 Le Jardin Marjorelle is a cool, shady feast for all the senses away from the hot, dusty city, but I found the most surprising feature was the sheer joy of the varied birdsong. In this small green oasis were full-throated blackbirds, sparrows, great tits, gray doves, warblers  and wagtails to name but a few, something our addiction to industrialised farming has largely robbed us of.

Marjorelle always suffered from poor health, and after his return to Paris in 1962, his great garden fell into despair. It was bought and restored by Yves St. Laurent in 1980 and is now run by the Marjorelle Foundation, and is one of Marrakech’s most popular attractions. To my mind, North Africa’s most exciting garden, Le Jardin Marjorelle is a superbly composed study of light and cool shade, and is best visited early to mid- morning, before the heat of the day, and the chaos of coach parties.