The Western Cape, in November, when the fynbos is in flower is astonishing. There is a profusion and natural exuberance in this unpromising shrubby landscape that is unique – the giant silvery-pink proteas, the orange pin-cushion proteas, the magenta-coloured pelargoniums, countless varieties of ericas, and the carpets of yellow and white daisies are breath-taking. Walking through it, you catch glimpses of the smaller flowers, such as lobelia – so much more delicate than the larger-flowered garden cultivars. But in garden-making, settlers wanted to be reminded of home……. 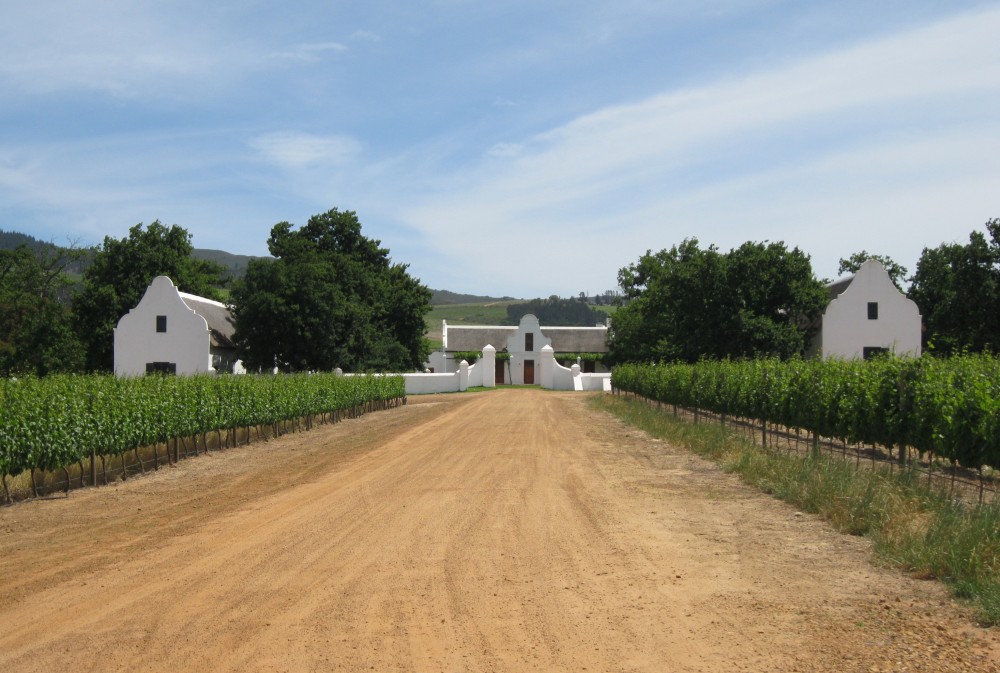 Talk to South Africans about their famous gardens, and those that come up in conversation, Vergelegen, Rustenberg, and Boschendahl, for instance, would not be out of place in the stockbroker belt of Surrey; if you take away the purple-hued mountains, and the clean minimalism of the Cape Dutch architecture, with its ornate gables, thatched roofs and white-washed walls. A new generation, more ecologically aware, is at last planting more exciting gardens with native species. But there is another much older garden tradition in the Cape, revisited by a new garden, Babylonstoren. 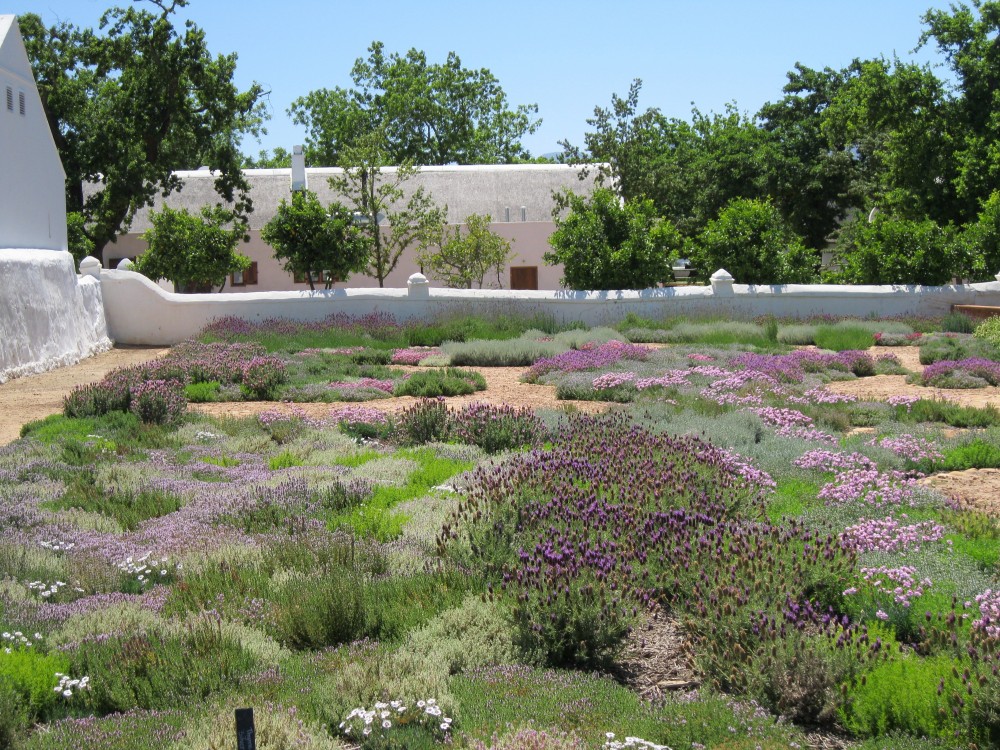 It is five years since Karen Roos, a former fashion and life-style editor, publisher and writer, bought the 500 acre run-down fruit farm; and three years since the garden was laid out, but Babylonstoren is now world-famous for its restaurant (- a two month waiting list for lunch), and for its sleek guest rooms skilfully fitted into former workers’ cottages. The sensitivity to the Cape Dutch style of the buildings, combined with the stripped back modern interiors and the attention to detail, is remarkable. 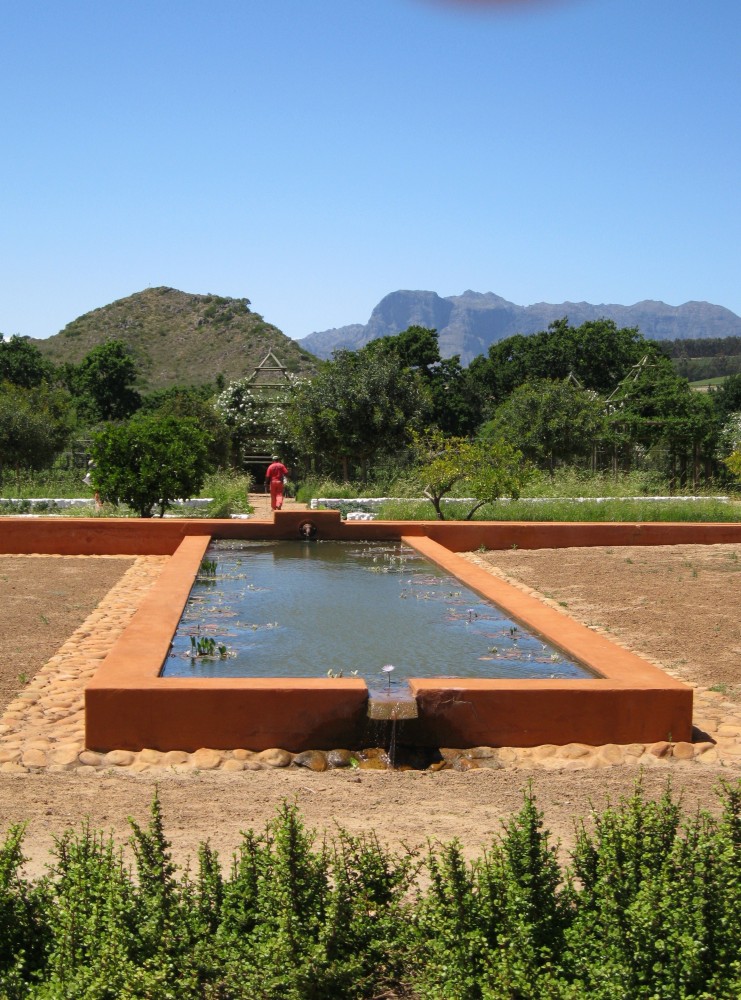 Situated in the heart of the Cape Winelands, between Paarl and Franschoek, and just a few minutes from Stellenbosch, this garden has its historical antecedents in the Dutch company gardens that were established in Cape Town in the 17th century. These supplied the merchant sailing ships that required fruit, vegetables and fresh water on their long voyages from India and the Dutch East Indies to Europe. 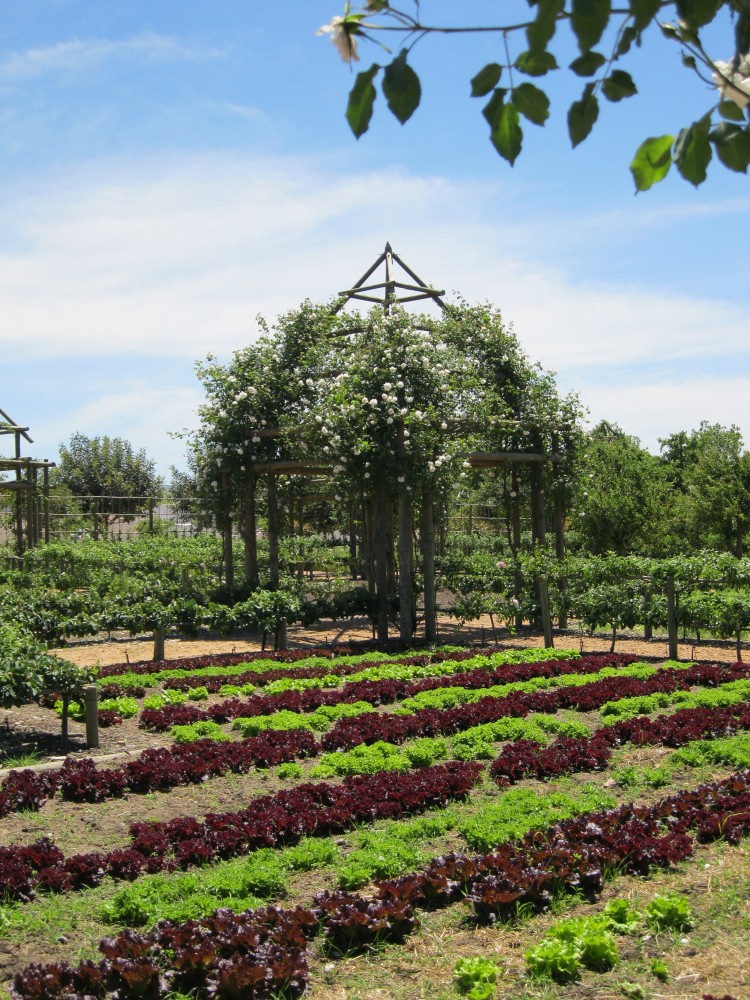 Babylonstoren harks back to this tradition; everything within the 8 acre walled enclosure of the garden is either edible or medicinal. For instance, there is a long avenue of 80-year old guavas transplanted from a neighbouring farm, a prickly pear maze (- a challenge if ever there was one), and the edible flowers of lotus and day-lilies. Over 350 varieties of berries, seeds, flowers, fruit and vegetables are supplied to the restaurant; everything except potatoes which are grown organically on a neighbouring farm. 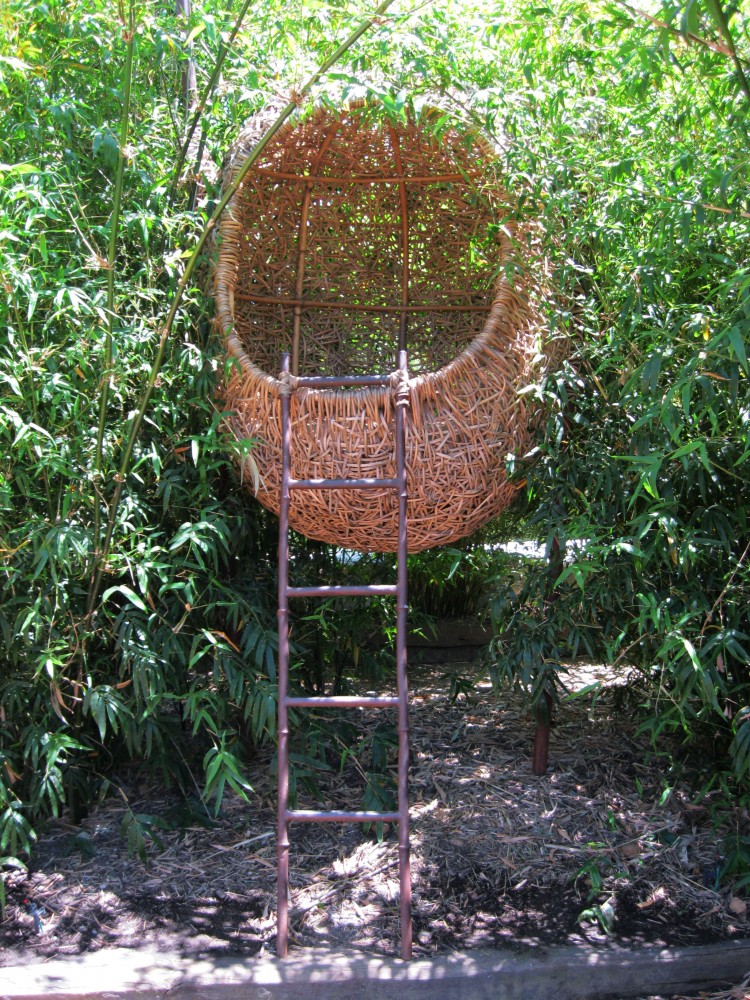 For me, there are two over-riding considerations in designing a garden, uncovering ‘ the genius of the place’, and giving the garden a sense of joy and calm tranquillity that lifts the spirits. Babylonstoren meets both of these criteria. It was initially laid out by a French designer, Patrice Taravella, famed for his reconstruction of a medieval garden at Priure d’Orsan. Two friendly and approachable South African designers, Gundula Deutchlander and Liesl van der Walt, head up the team that fine-tune, manage and teach the other gardeners. 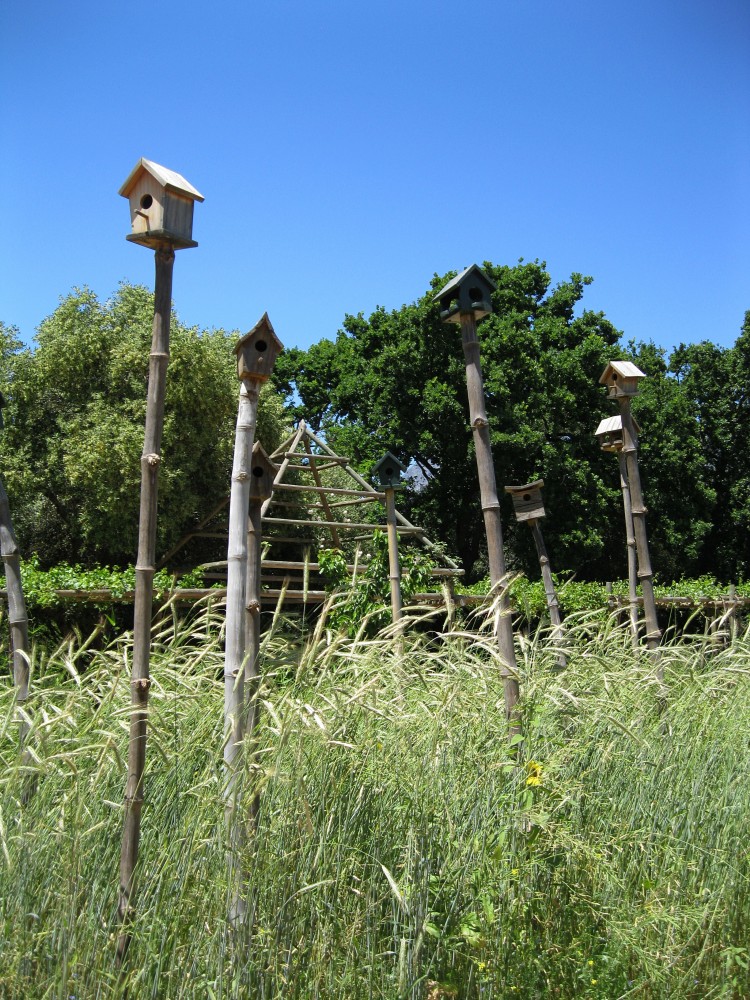 The formal grid of main avenues is sub-divided into a complex arrangement of diverse sub-grids, that give it great interest and define different areas of the garden. For instance, in addition to the regimented rows of vegetables, laid out with a designer’s eye, and the orchards of olives, citrus and sub-tropical fruits, there are many surprises. 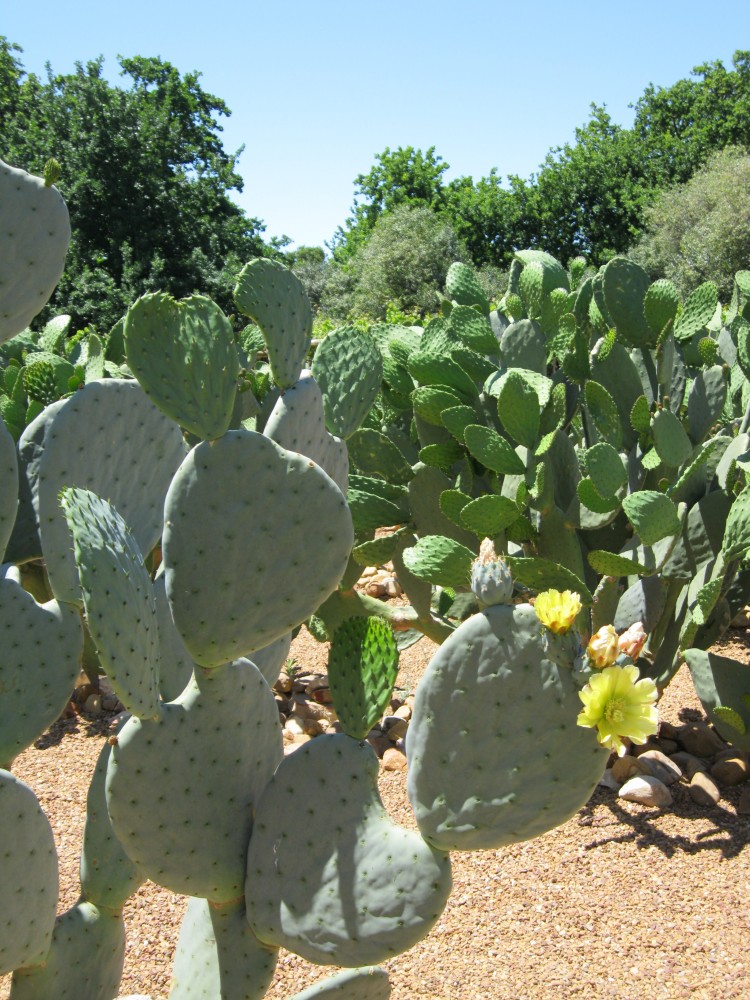 By the garden entrance is a labyrinth of thyme and low shrubby herbs that scent the air; and next to the prickly pear maze, is a bird sanctuary with a sculptural arrangement of nesting boxes on tall cane poles, and woven hides suspended from the trees. Another enclosure is of almond trees above a diverse collection of beehives, with a strange sculptural arrangement of stones on strings hanging from the white-washed walls, providing the support for tomatoes growing on the other, sunnier side. 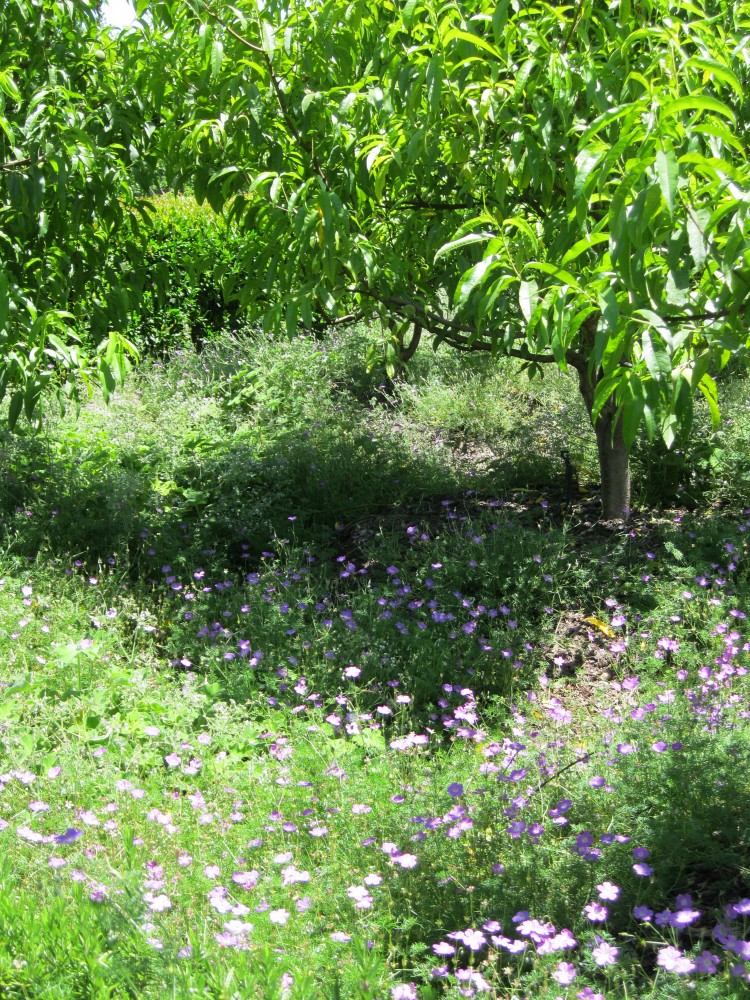 I think that productive gardens seldom have good structure, many are two-dimensional and often the whole garden is open to view. What holds Babylonstoren together are the formal avenues of mature transplanted trees, the stunning block plantings of lavender and rosemary, the large identical arbours with their pyramid roofs festooned with climbing roses; but also that element of surprise that leads you on to explore further. 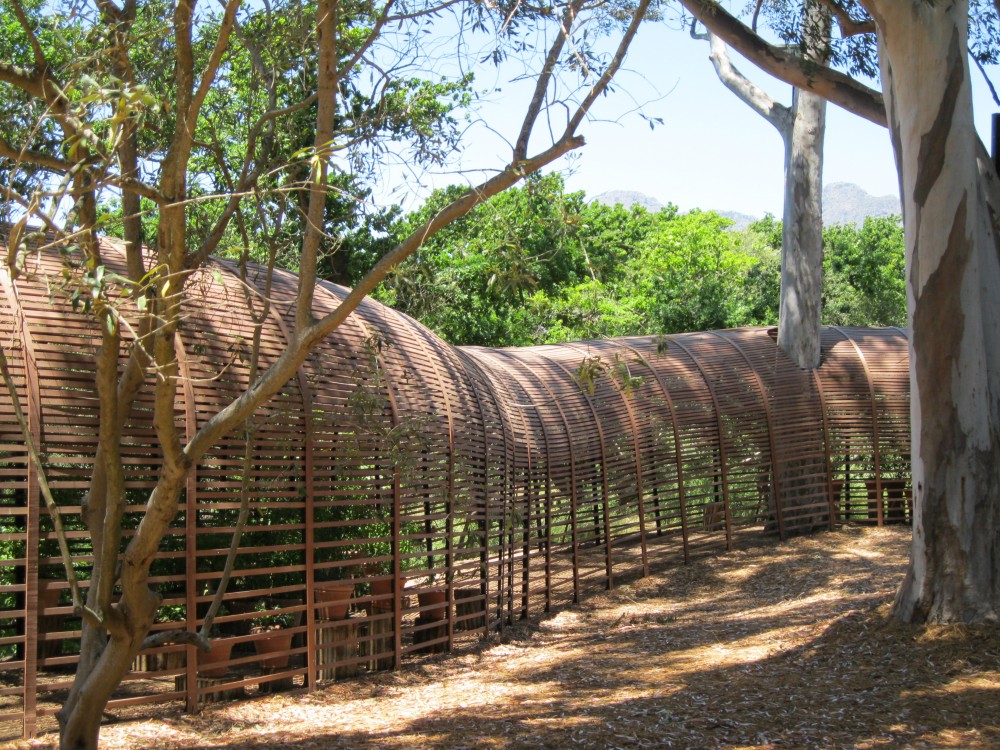 Guided tours are advisable, because it is so easy to miss the many unusual climbers, trees, shrubs and vegetables. Outside the garden, adjacent to the river, is a large collection of different varieties of clivias, and the ‘puff-adder’, an extensive timber-slatted tunnel that bulges and snakes its way through the woodland. The greenhouse doubles as a lunch-time cafe and tea-house.

This is a garden that is stylish, playful and full of surprises. Fitting perfectly into its farm setting, it sets a new benchmark for all productive gardens.