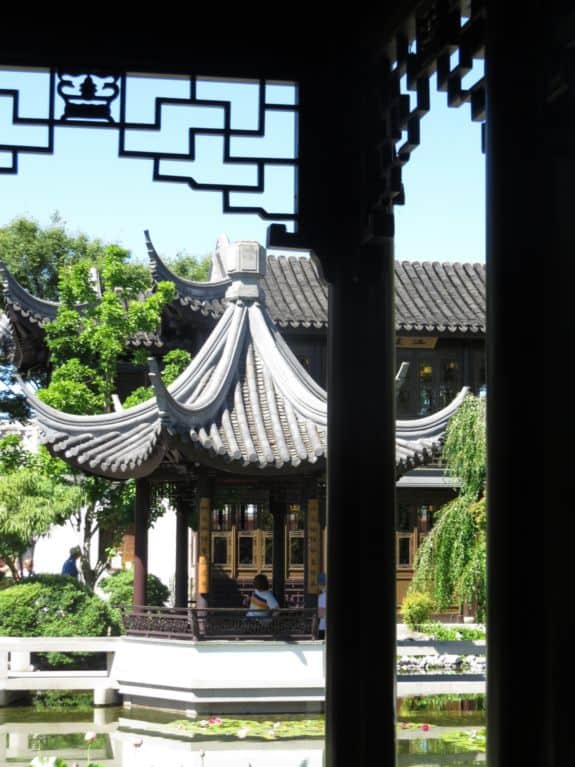 So-called as the reflection of the moon appears to be trapped in the pavilion’s shadow on the pond.

It has always struck me as strange that Chinese gardens in the West are rare, but Japanese gardens are comparatively common.

Trade links between Europe and China originated long before Marco Polo’s famous journey along the Silk Road, and luxury goods started to arrive in Europe such as bales of fine cloth, spices, tea and wonderfully translucent porcelain. However, this cultural exchange didn’t translate into gardens, except for the 18th century fashion for chinoiserie which resulted in exotic garden follies such as ornamental bridges, tea houses and small pavilions set conspicuously adrift amid the trees, grass and lakes of landscape gardens. 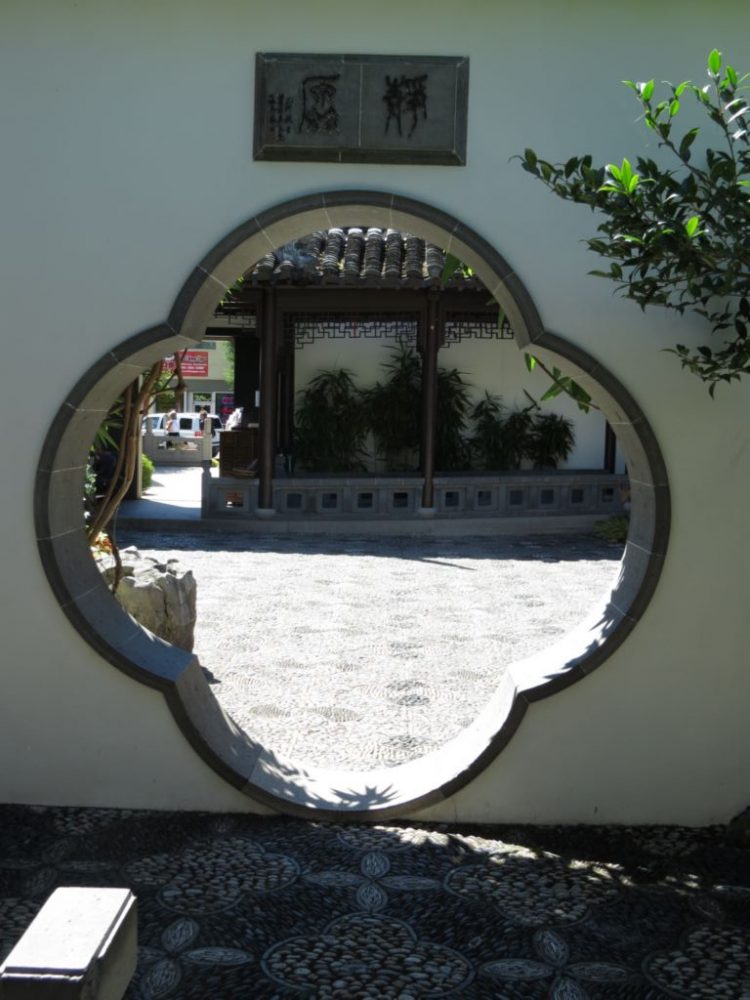 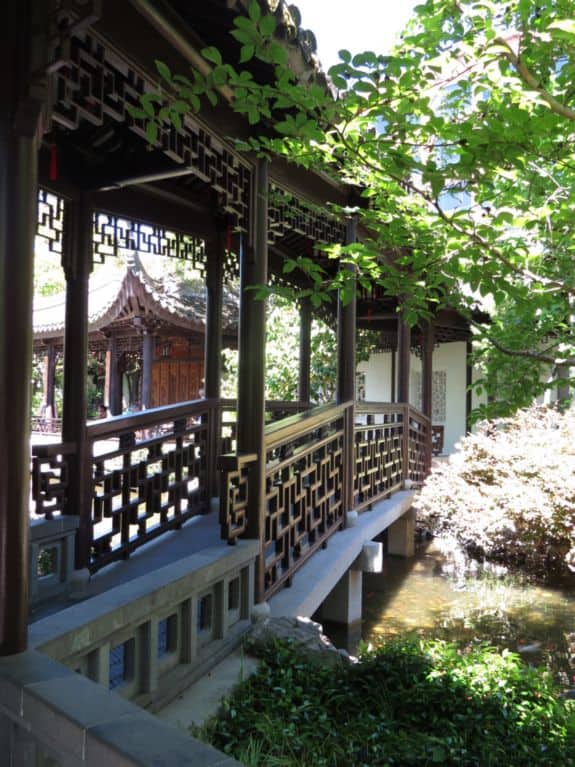 Meanwhile Japan remained closed to western trade until the 1860s, and the late 19th century fashion for all things Japanese saw many so-called ‘Japanese’ gardens created that paid lip-service to the style (without understanding the underlying philosophy). In the United States there are 128 notable Japanese gardens of varying quality, but only seven Chinese, which seems strange since trade with China has existed for much longer than with Japan. I am lost for an explanation of this other than cultural preference. This makes Portland’s Lan Su Classical Chinese Garden unusual, but more than this it is the outstanding and authentic quality that makes this garden something very special. 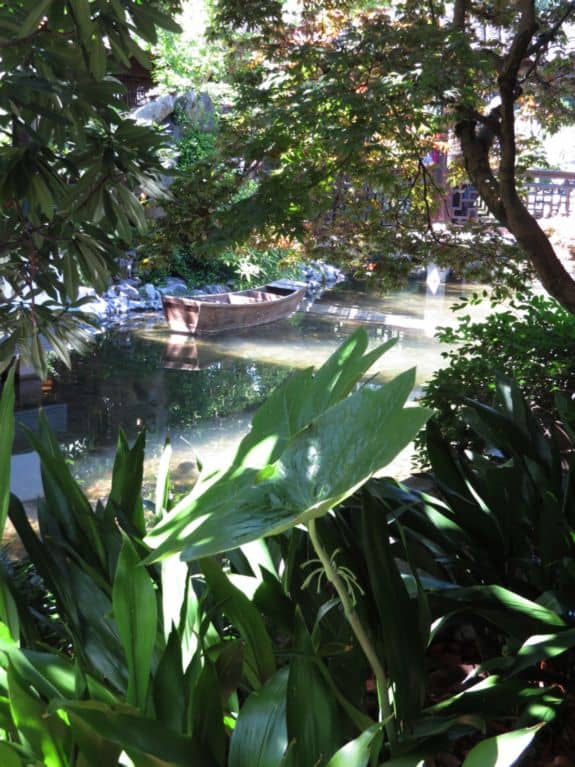 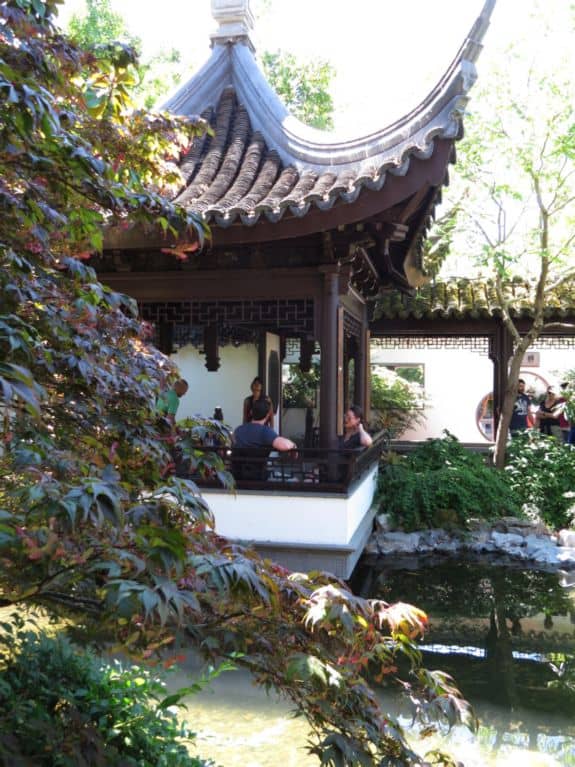 A Chinese garden had been muted in Portland long before 1988 when the city became twinned with Suzhou near Beijing, one of the most remarkable cities in China. Renowned for its network of canals, Suzhou has 8 UNESCO listed classical Chinese gardens and a further 52 are in private hands. Unfortunately, tourism in China hasn’t yet caught up with the potential that Suzhou’s gardens has to offer, and only a couple are open to the public. 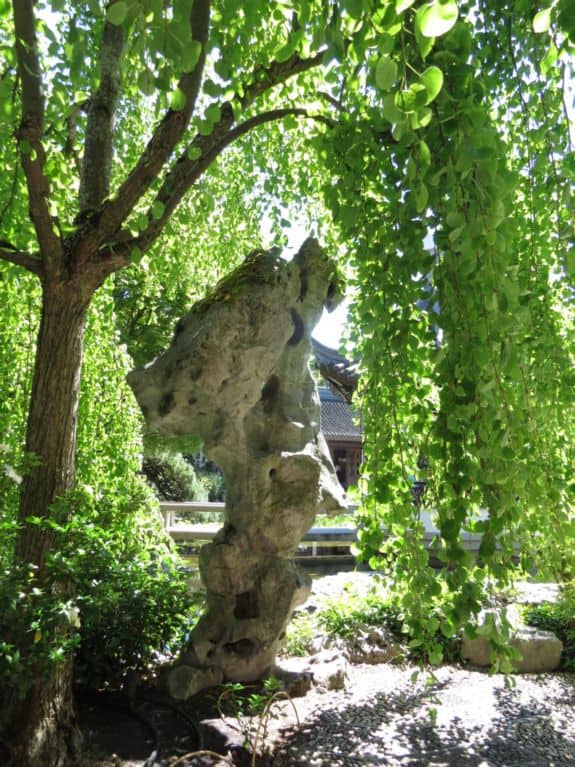 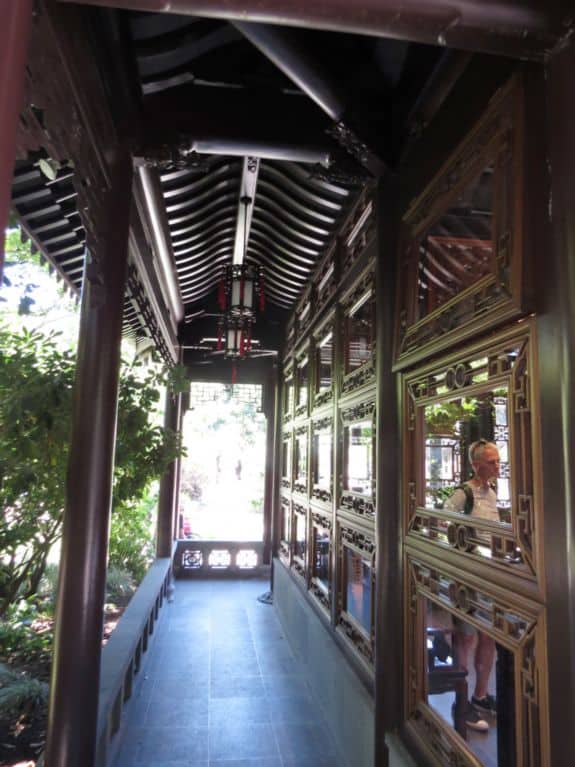 Portland’s garden is a reconstruction of a Classical 16th century Ming dynasty garden by Chinese garden designer Kuang Zhen, and is located in a run-down district that was formerly Chinatown. Fortunately, the high walls muffle the noise and give the garden a sense of peace and tranquillity. Designed as the house and garden of a wealthy family, it has a ‘Scholar’s Study’ where the men of the family studied for their civil service exams that would ensure the family’s continued prosperity; hence this type of garden is often referred to as a ‘Scholar’s Garden’. 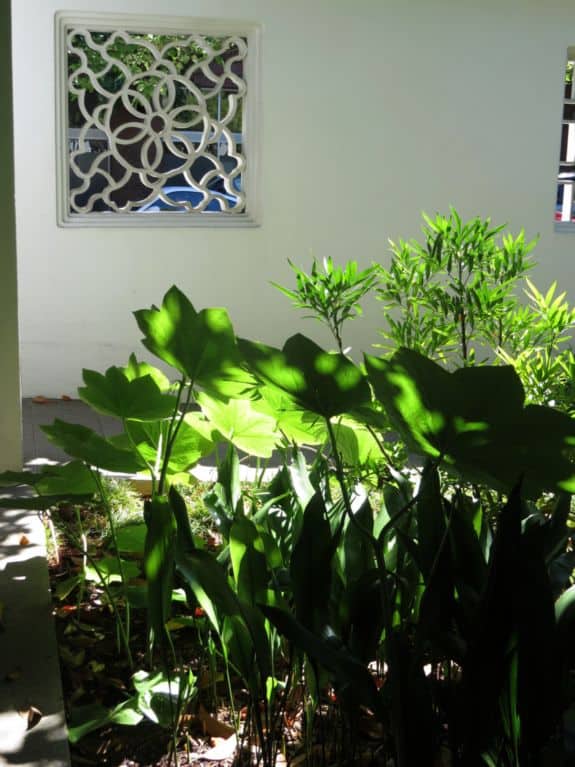 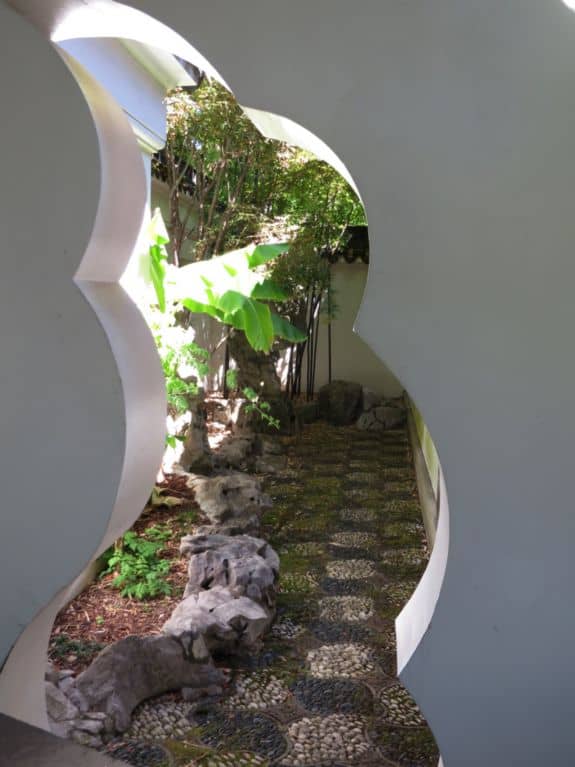 It was built by artisans from Suzhou, and opened to the public in 2000. The beautifully detailed traditional buildings, made in China and assembled on the site were brought over along with over 500 tons of spectacular and sculptural Taihu limestone which gives the garden its authentic Chinese character. The buildings are grouped around the dominant feature, a large pond, and there is a circulatory path that takes you along fine decorative pebble pavements, over covered bridges, along verandahs and through halls, to a delightful island pavilion and past an impressive waterfall. I find one of the most exciting design features to be the decorative perforated wall panels and the tantalising glimpses through from one garden space to another. 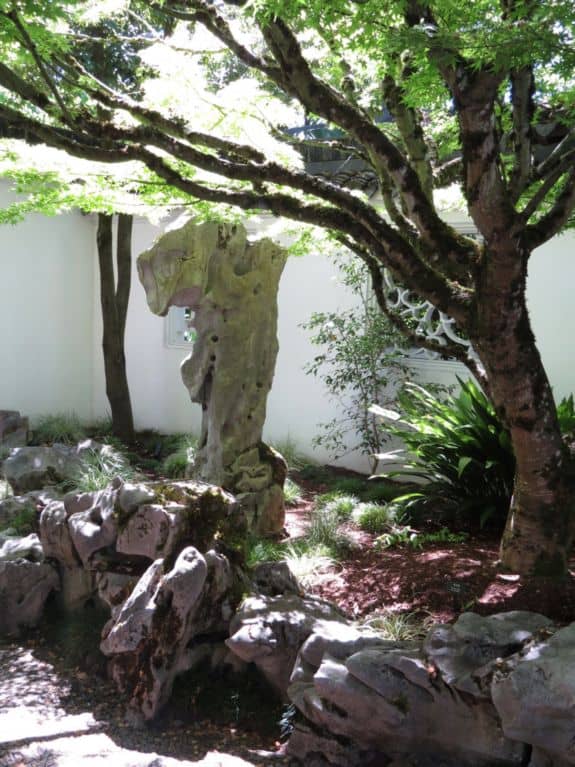 Because of import restrictions virtually all the garden trees, plants and perennials had to be sourced in the United States but despite this requirement there are many rare and unusual specimens. The garden is particularly known for its collections of magnolias, camellias, rhododendrons, osmanthus, and peonies; but for me the unusual species, lotus, persimmon, orchids and gardenias were the main attraction. 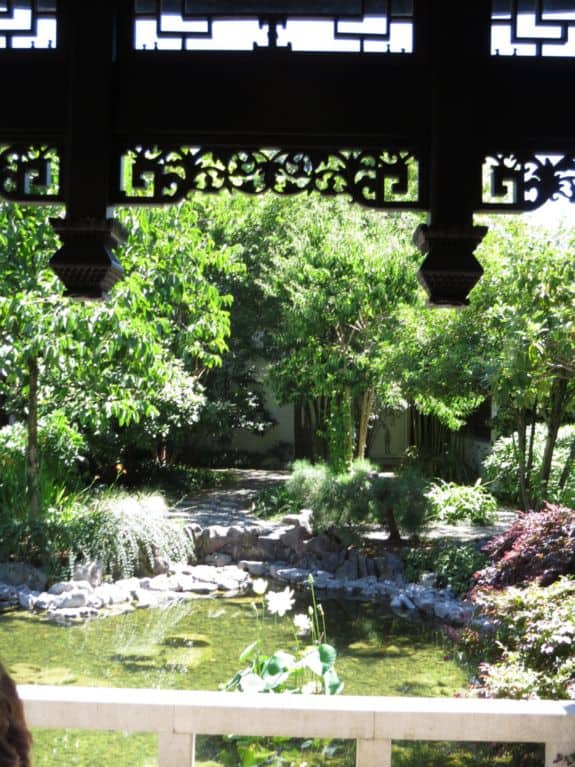 View from The Painted Boat in Misty Rain

This pavilion symbolises the connection over the sea between the sister cities of Suzchou and Portland.

Portland’s two greatest attractions are its Japanese and Chinese gardens and it is interesting to visit both and compare and contrast them. Much the smaller, Lan Su’s strengths are the fine craftsmanship in its many buildings and that it is a successful Chinese cultural centre. A comprehensive programme of workshops, demonstrations, excellent and informative guided tours, and a schedule of traditional music and calligraphy make this a small taste of classical China – not to mention the delicious dumplings, bean cake and plum wine in the café!