Beside the Grotto at Vaux le Vicomte can be found a pair of allegorical stone statues of a lion protecting a squirrel. The lion was meant to represent Louis XIV, the tiny squirrel Nicolas Fouquet (whose name in Artois dialect meant ‘squirrel’). A successful financier, Fouquet had been appointed Superintendent of Finances by Cardinal Mazarin, the first minister during Louis’s minority. 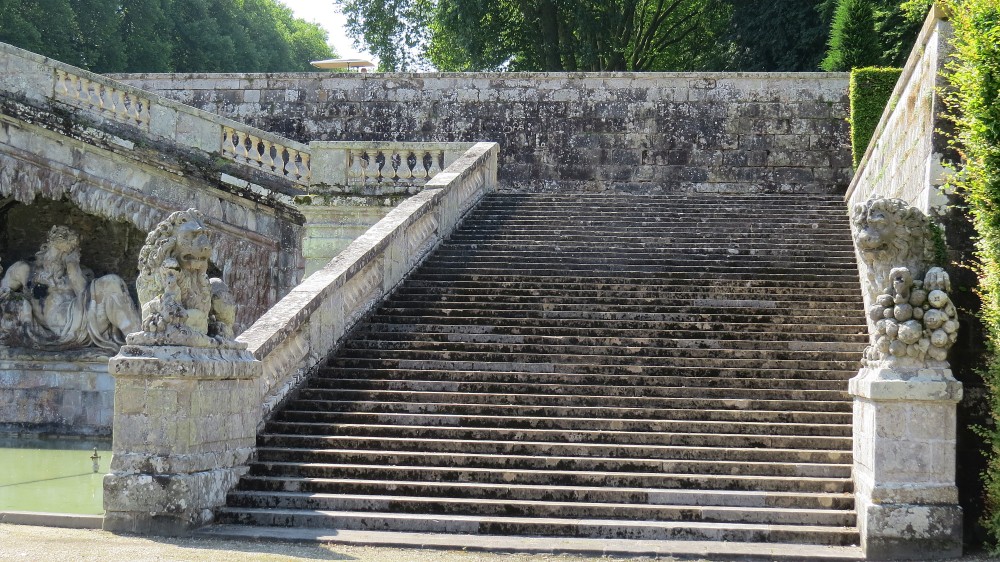 However, upon the death of Cardinal Mazarin, Louis decided to assume control of the state, and with political change in the air Fouquet should have sensed that this was not the time to throw a spectacular inauguration party for his recently completed chateau and garden. The lion felt upstaged by this cultivated intelligent little squirrel and decided to have him for breakfast. Charged with embezzlement, Fouquet spent 17 years in solitary confinement, and everything moveable from tapestries to garden statues and orange trees ended up at Versailles. Vaux le Vicomte’s brilliance was a brief shooting star but its legacy was to transform French garden design. 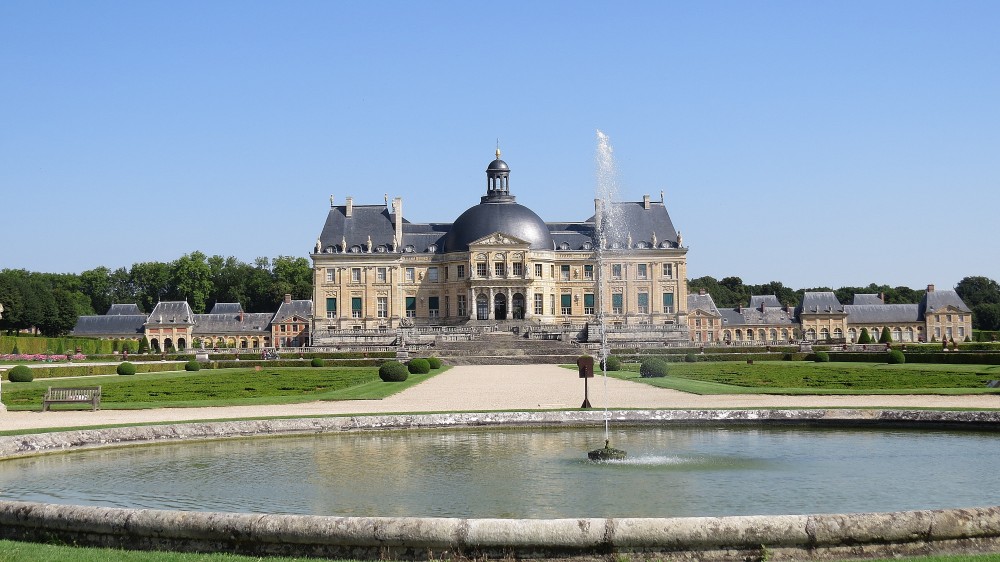 The Chateau on its raised platform from the Rond d’Eau

Four years earlier in 1657, Fouquet had commissioned three of France’s most prolific talents, the architect Le Vau, sculptor/painter Le Brun and garden designer Le Notre to work together and build an elegant chateau where architecture and environment were in perfect harmony. Le Vau broke with tradition, and upon a raised platform that overviewed the garden arranged the chateau’s main rooms on the ground rather than the first floor.

The garden, no less innovative was Le Notre’s first significant project and made his reputation. I have to confess that brought up in an English Landscape Garden tradition of William Kent, Capability Brown and Humphrey Repton, I never really understood the appeal of the Baroque garden. From photographs it seemed the entire garden could be seen at a glance, and was only interesting from the first floor windows of the great salons. How wrong could I be; Vaux is both subtle and full of surprises. 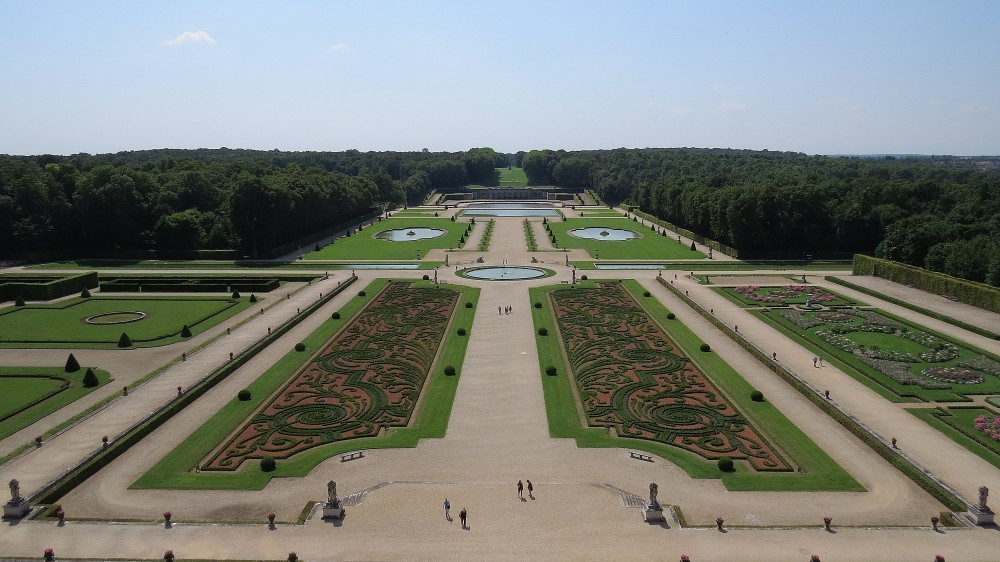 Garden from the Viewing Balcony above the Dome

I think it is best to start a visit to the gardens of Vaux by climbing to the top of the house, through Le Vau’s spectacular dome to the viewing balcony above. Here the whole garden is laid out before you, with formal Main Avenue disappearing to the horizon over ornate parterres de broderie, fountain pools, canals and grotto to the giant gilded statue of Hercules set at the top of the adjacent hill. But here is the first of Vaux’s surprises – this great Baroque garden is not symmetrical. To the left hand side lies the wider Parterre de Couronne, to the right the narrower Parterre de Fleurs, and towards the end of the garden by the Miroir d’Eau can be found a feature known as the Confessional to one side but not counterbalanced on the other. 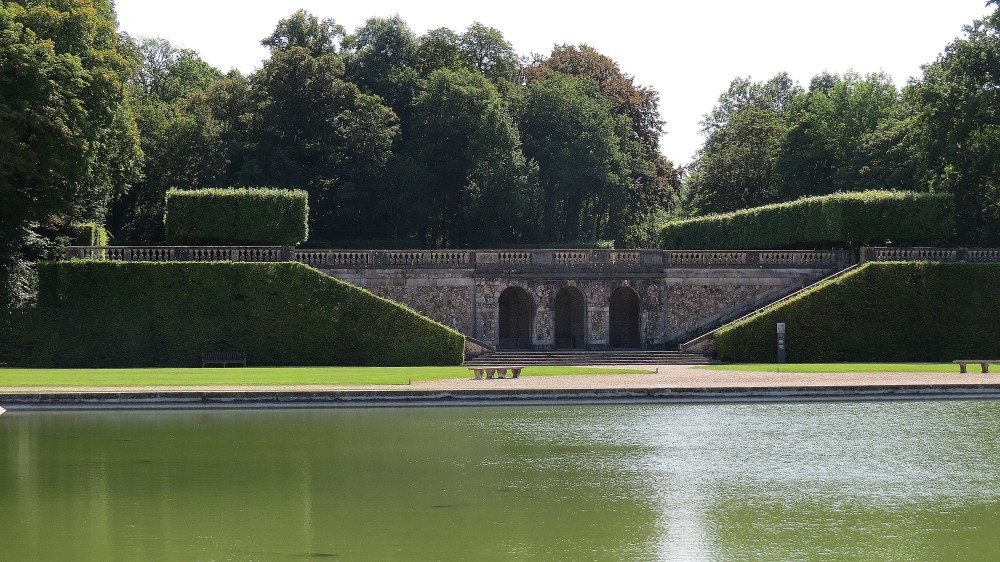 Walking through the garden, there are other surprises not visible from the main terrace. Both the transverse Petit Canal and the spectacular 3km long Grand Canal are hidden from view, as well as the 19 enormous elaborately carved stone cascades that flowed into a lower level pool by the Grand Canal. 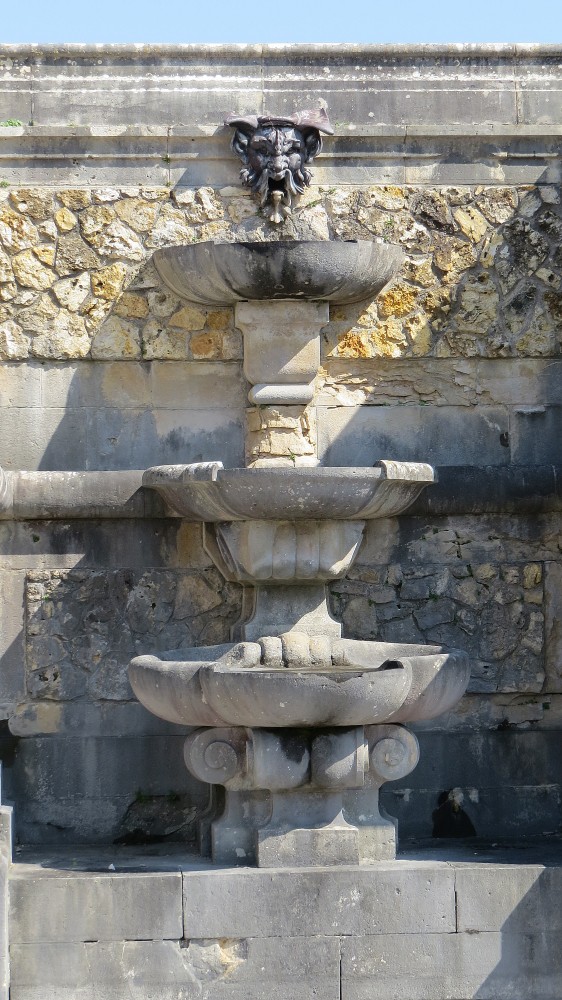 As in all Le Notre’s gardens water was an important feature. Unfortunately at Vaux, this was scaled back in the early 20th century reconstruction of the garden. When the garden was completed in 1661, there were dozens of fountains that lined the Main Avenue, but these have been replaced by late 19th century statues. The private owners of Vaux have put forward an exciting proposal to reinstate sixteen of the fountains over the next few years.

Le Notre played with water in many ways from the Miroir d’Eau that reflected the changing skies, to the spectacular fountains of the Bassins des Tritons. This use of water enlivened the static architectural composition of yew and hornbeam hedges, and box-edged parterres with their mulches of pink broken brick, terracotta, and black anthracite. 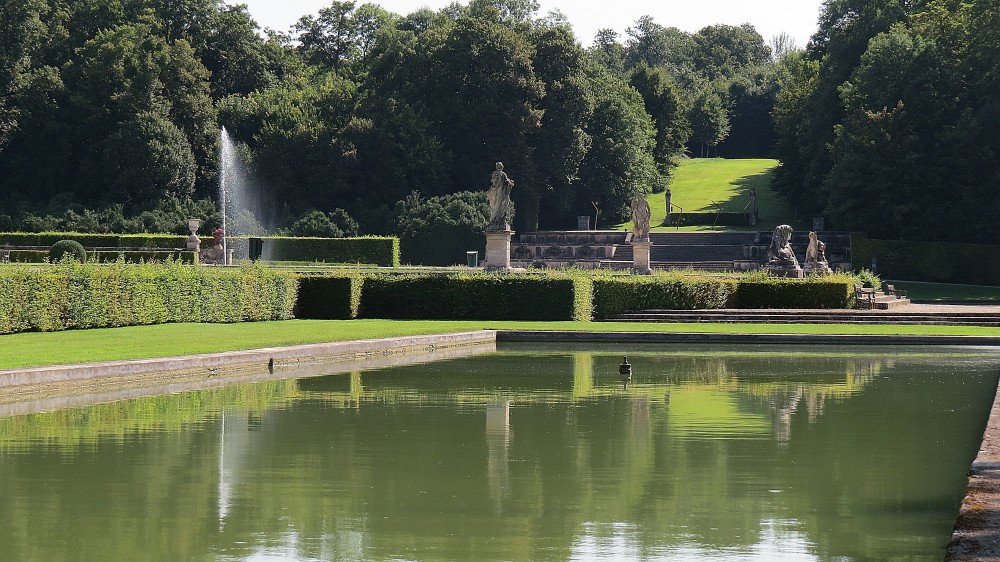 Much is made of Le Notre’s use of perspective to make the garden at Vaux seem larger than it is, and viewed from the Statue of Hercules on the hillside opposite the difference is startling. Perhaps I have strong peripheral vision, but I found the optical illusion unsettling because the woods to each side of the garden remained in normal perspective. 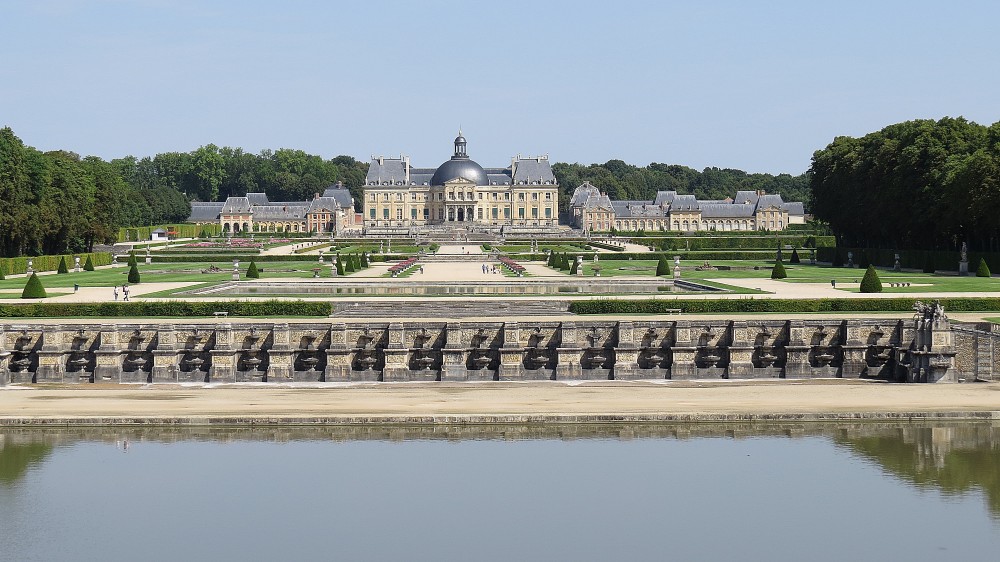 The Reverse Perspective from beneath the Statue of Hercules

The Baroque garden may appear simple but it relies on high levels of maintenance to keep those crisp intricate parterre de broderie swirls, hedges, lawns and topiary cones looking immaculate. On my visit to Vaux, a large garden staff was busy torching weeds on the gravel paths, rotavating narrow beds between lawns and box hedging, cutting grass and hedges and watering newly-planted trees. The standard of maintenance was superb and the overall result rivalled any garden I had seen. 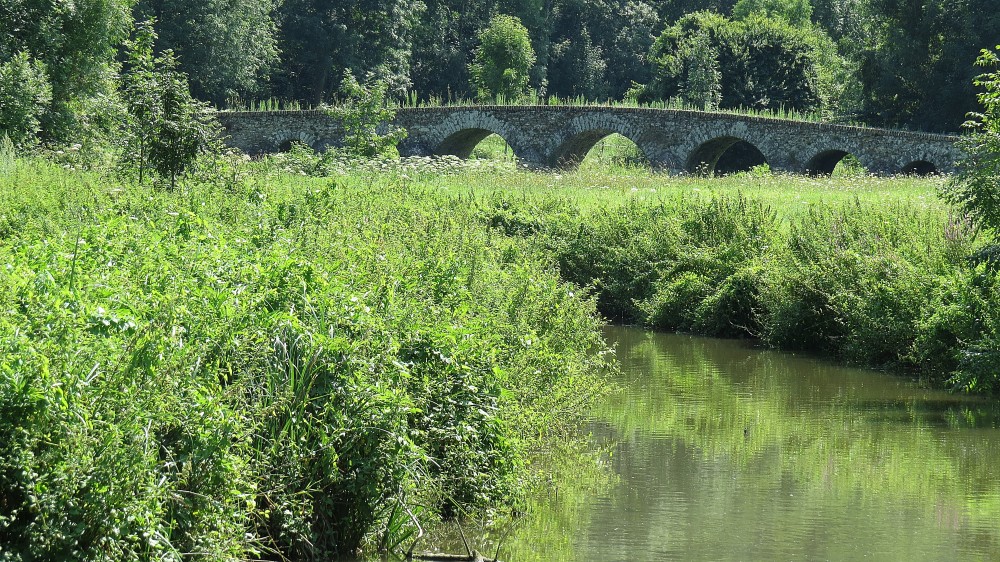 The Medieval Bridge over the River Anqueil

Walking around the Grand Canal, one further surprise awaited me. One of the most intriguing details of the garden is that from the circular water basin at the end of the transverse Grand Canal, Le Notre incorporated into the garden a view of the medieval bridge crossing the River Anqueuil. This seems the antithesis of Baroque garden design anticipating the birth of the picturesque garden movement in England by some hundred years.

Vaux le Vicomte confirmed Le Notre as the grand master of Baroque garden design, and unlike the vast layout of Versailles, Vaux has an intimate and human scale. Unfortunately it spawned hundreds of dull copies by second and third-rate designers who failed to grasp the subtlety of its design. Those are the many dismal gardens where a single photograph tells all.