In the last week or so, it has dawned on me that if there is such a thing as a garden visiting nerd, I have become one. I keep catching myself saying ‘when I visited this garden 20 years ago’ and ‘on my previous two visits’. But there is an upside, gardens are living things and it is exciting to see new gardens evolve, older ones rejuvenated and very sad to see those that are gasping for life slowly die. 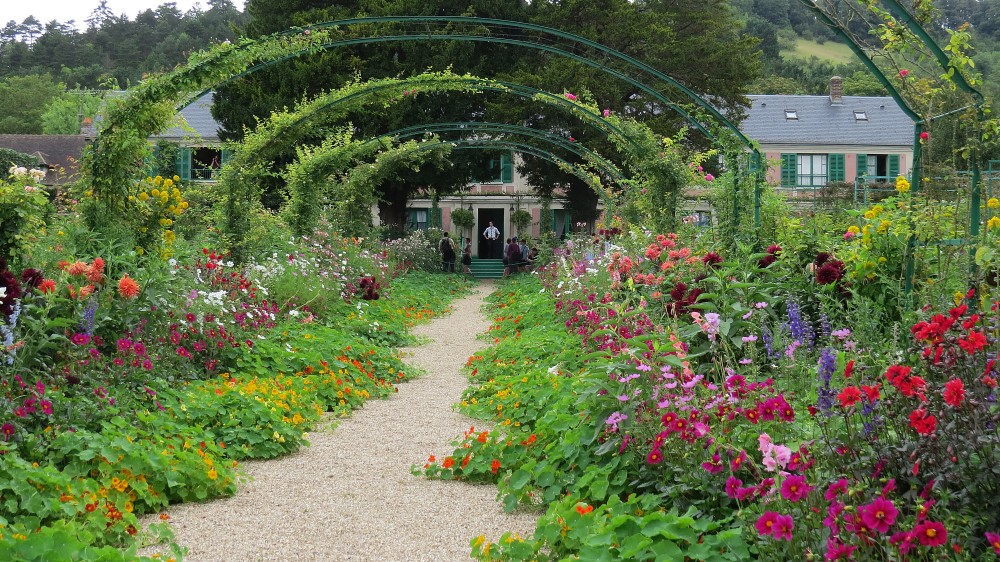 There is one garden where the change has been so extraordinary in such a short space of time that I found it thrilling, and I wanted to go up to the head gardener, James Priest and tell him so, interrupting his dialogue with a large party of visiting Japanese. Priest, an Englishman by birth but a great Francophile had worked for over 17 years in France for Baron Elie de Rothschild before being offered the job at Giverny three years ago. Giverny is a Gallic institution receiving 500,000 visitors a year, and to appoint an English gardener caused consternation and some heart-searching in high places……………………….. 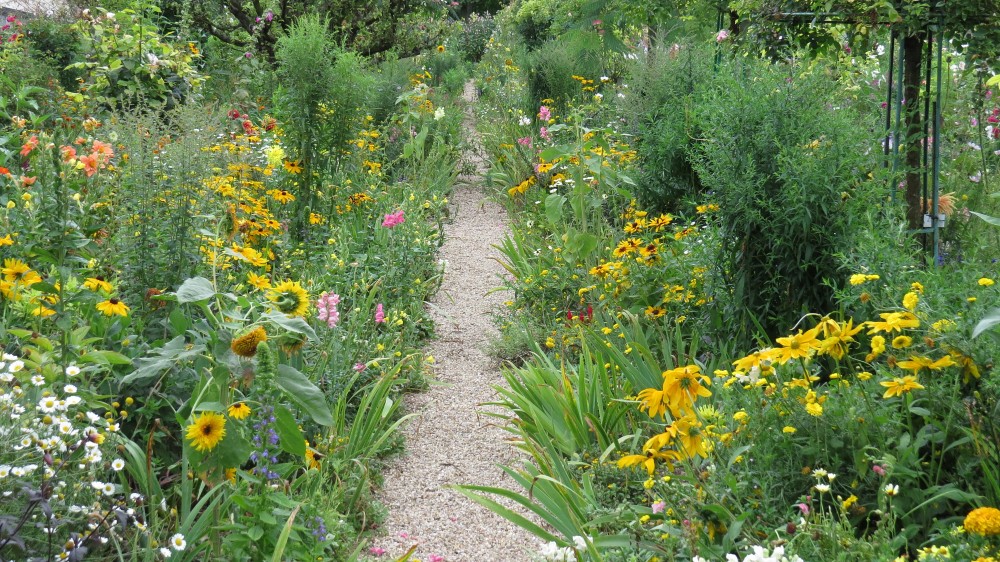 Claude Monet described his garden at Giverny as ‘my most beautiful painting’ and what Priest has done in the Clos Normand, the orchard that Monet turned into a flower garden is to replant it with a painter’s rather than a horticulturist’s eye. I think that Priest has been so successful at doing this that it feels as if I am stepping into a series of Monet’s paintings. 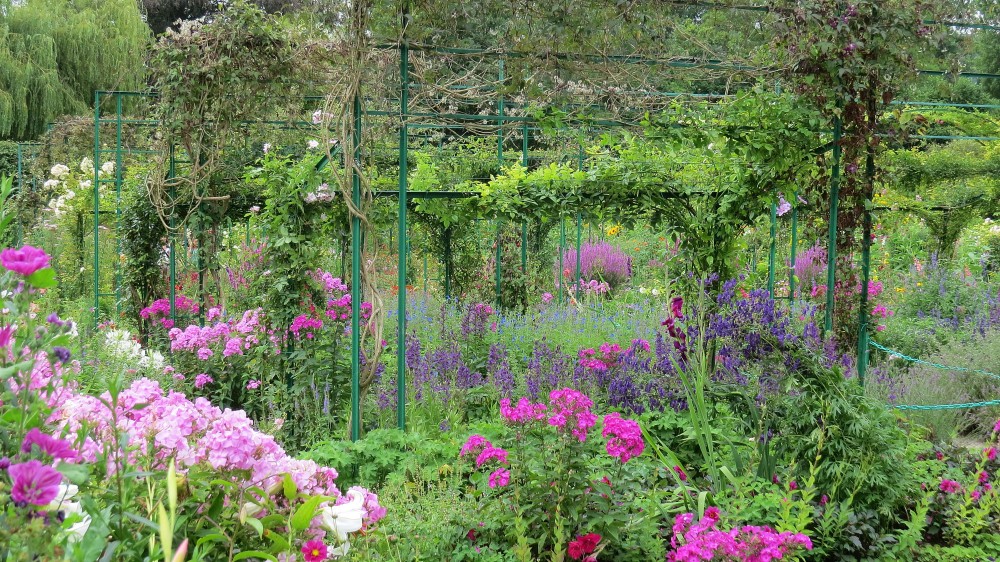 The Clos Normand is laid out in that familiar French style of order, regularity and geometry that we English, with our flowing ‘natural’ lines find hard to grasp. To attempt to restore tranquillity to the garden the main walkway has been closed, and visitors are directed around the periphery of the garden, a huge improvement. The surrounding paths may be crowded but at least it is possible to photograph the garden without it looking like a members’ day at Chelsea. 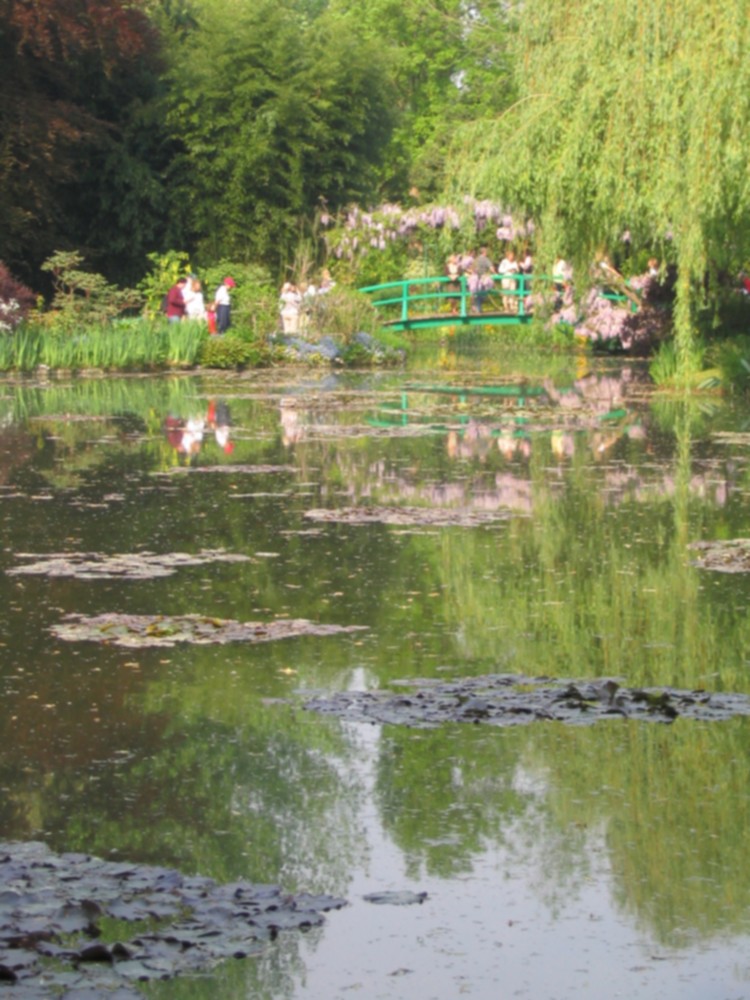 The planting in the Clos Normand is in straight lines and blocks not the English obsession with informal clumps of carefully graded heights.. Perhaps the thing I found most surprising was the uncontrolled exuberance and those unrelated colours jostling for my attention. All the great Impressionist favourites are present in the garden, the irises, nasturtiums, tree paeonies and poppies but the colours seem to blur in an extraordinary way like in Monet’s paintings. As a former architect, I admit to an obsession with strong garden structure but here I loved the way the flowers are used like paints put together on a canvas. 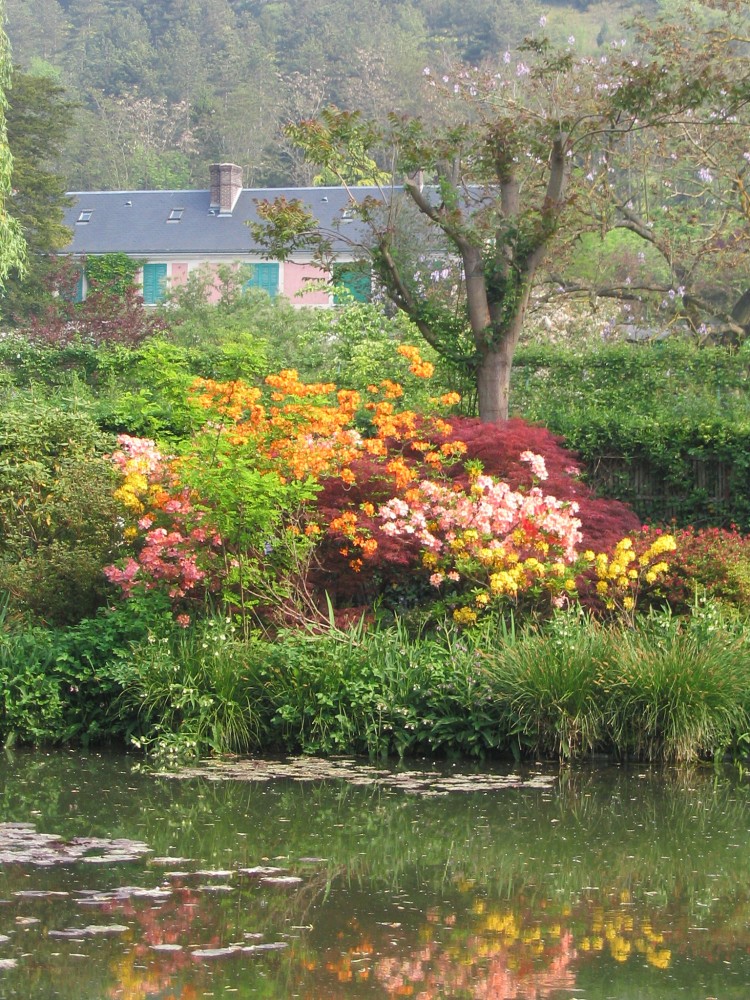 Claude Monet first leased the property in 1883, and after something of a financial roller-coaster was able to purchase the house, garden and the meadow to the other side of the road in 1893. This was a time of huge Western interest in the art of Japan, and Monet had a fabulous collection of Japanese prints, which are on view in the house. By diverting the river, and creating a pond Monet was able to make his famous water garden where he was to produce his greatest masterpieces ‘en plein’air’. 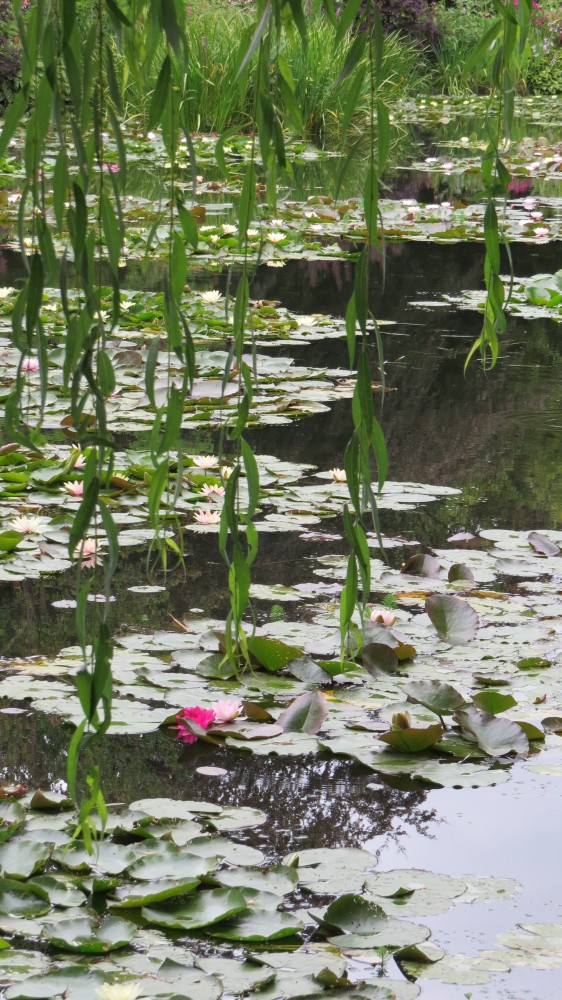 The great series of water lily paintings that he undertook although looking natural were in a way, composed. Each day Monet’s team of eight gardeners were required to wipe the water lily pads and scoop all the algae out of the pond so that the water remained clear – an increasingly difficult thing to do today because of our addiction to nitrate fertilisers. He paid for the adjoining dirt road to be resurfaced in tarmac so that the pads wouldn’t become so dusty and because rats are partial to the water lily roots, nursery stock was needed for periodic replenishment. 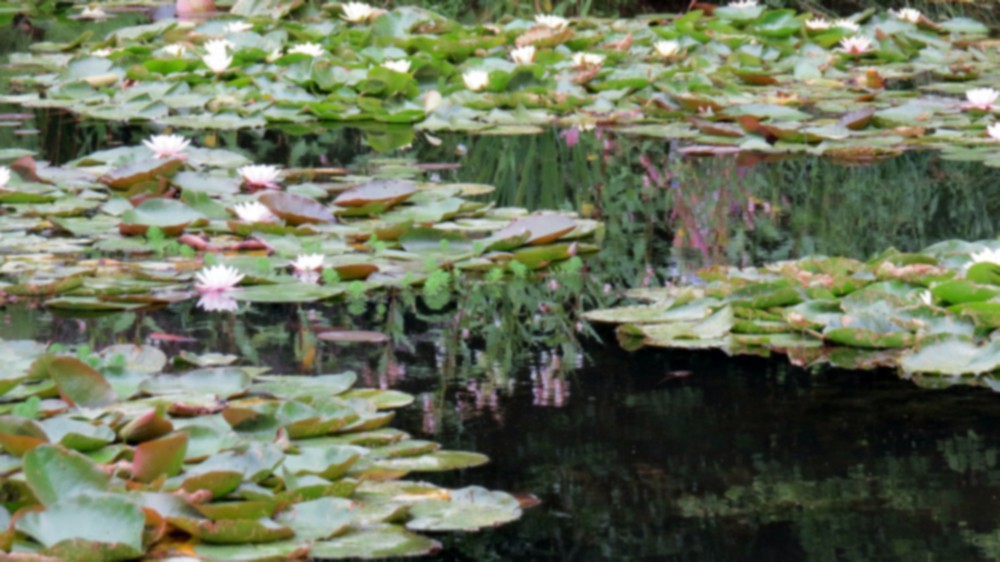 In the Water Garden, the planting is more shrubby. Azaleas, rhododendrons, red berberis, acers, and bamboo flourish punctuated with weeping willows and flowering cherries under an open canopy of forest beech. But the highlights are the water lilies and to see them at their best a mid-summer visit is required. To see the Japanese bridge clothed in the purple racemes of wisteria, late April is probably a good time to visit. Priest felt that the Water Garden just required a bit of light tweaking, and so it is largely unchanged.

Giverny is a fabulous and unique garden hugely improved over the last three years, and probably better now than any time in the last ninety. This most recent visit has given me an extraordinary insight into Monet’s Impressionist vision whereas in comparison, I felt on the previous visits I was seeing things second-hand.

It takes a lot to blow a jaded old garden visitor like me out of the water, but Giverny did just that. An amazing experience that will remain with me for a very long time.