Italians just don’t get it. At the inappropriately named Villa Adriana (more the size of a city than a villa) the stifling bureaucracy of the Italian State manages, but not quite succeeds in strangling something that is hauntingly beautiful. Getting past the unfriendly ticket sales, the custodians sprawling out in their large office chatting, the closed cafe, and the dull professorial audio guides, I walked up a winding tarmac road through an outgrown olive grove to a blank three-storey high wall, more like the entrance to a prison. To one side is the visitor centre with its scale model of the Villa in 140AD, and here for the first time I had an inkling of what lay ahead. 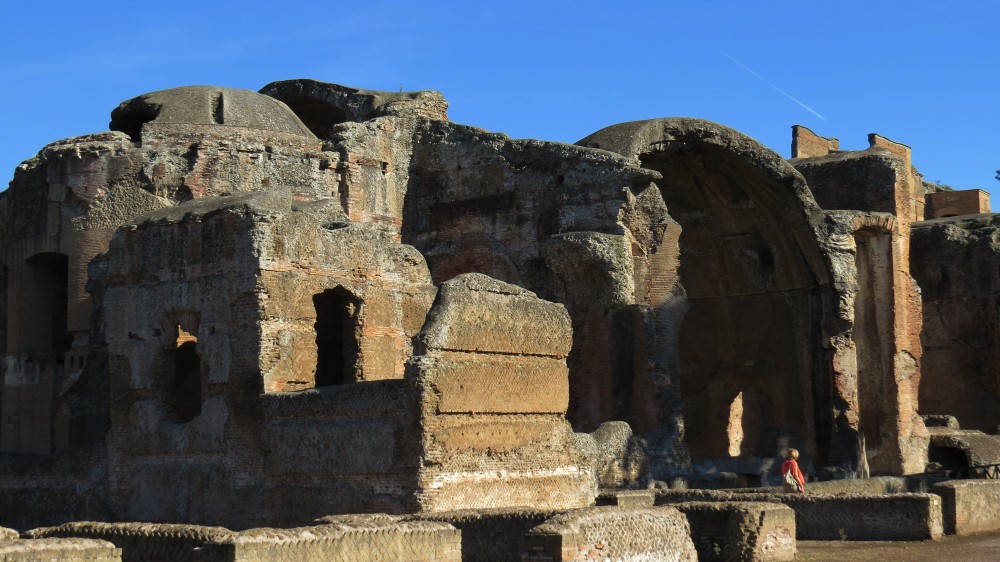 Passing through the gates, the first impression is of a Cecil B. de Mille Hollywood film set under construction, the scale of the buildings is vast and so much remains after being heavily pillaged. There are not just a few foundations, but huge five storey ruined palaces, libraries, baths, theatre, hospital and courtyard gardens. Acquisitive 16th century Renaissance cardinals and princes were fascinated by the Villa’s aura of wealth and power, and were the first of many generations to steal thousands of its sculptures, its marble and anything of interest or value. 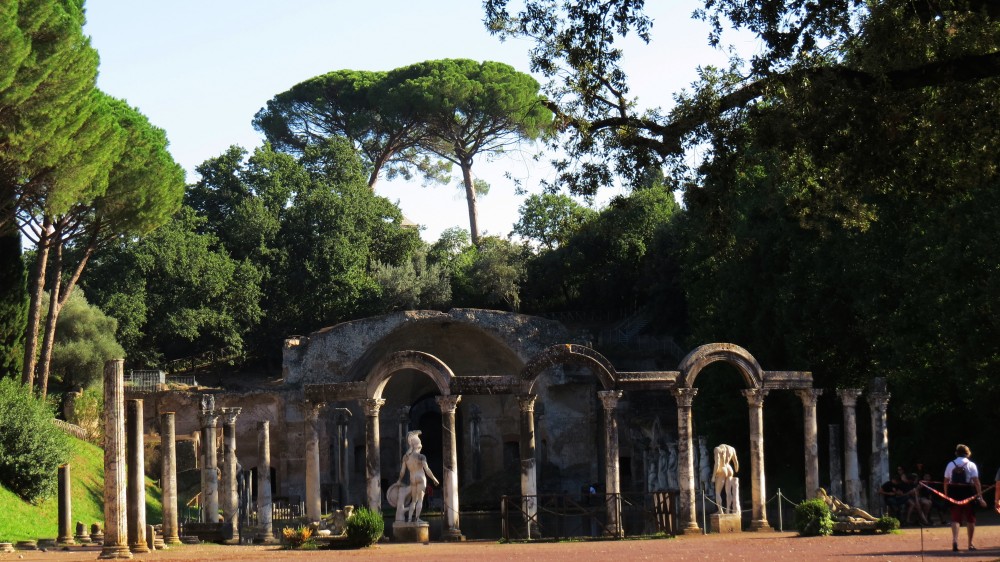 In particular, it was the Canopus, a vast open-air banqueting hall around a hundred metre long canal that they were drawn to, with a curved colonnade at the northern end and an enormous apse-like Nymphaeum at the opposite end. Serious excavation started in the 16th century by Ligorio, who later went on to build the astonishing water garden at Villa d’Este. He showed how in the Nymphaeum water was used in spectacular and playful ways to sparkle, cool the air, provide lively movement and a sense of relaxation and luxury in the overbearing heat of the Roman summer.

This was the touchstone for marvellous Italian gardens in Florence and around Rome, where water was the dominant feature, and from here the influence spread across Europe and down into modern times. 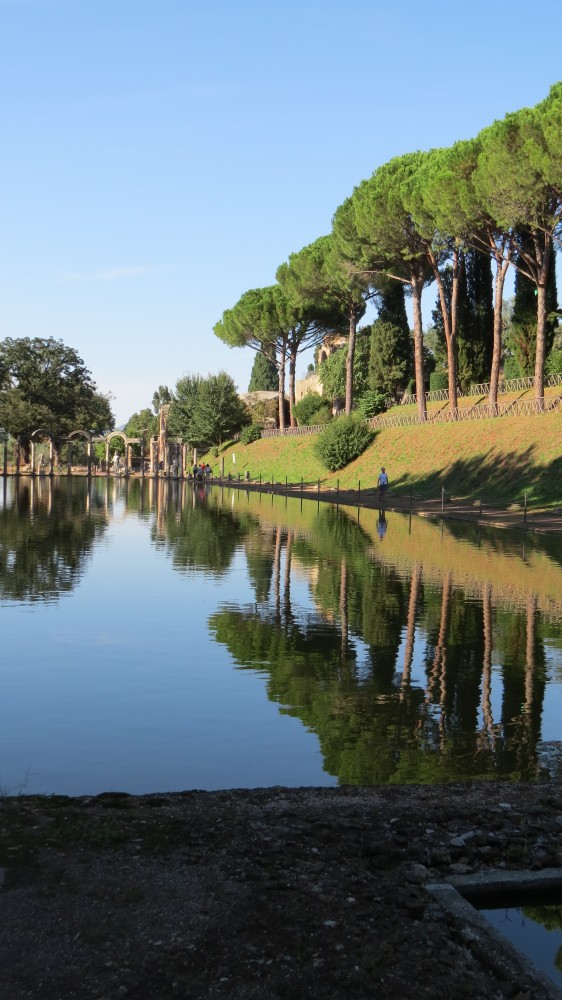 The Canopus has a feeling of romantic mournful neglect which I find draws me in. However, the short sections of reconstructed colonnade, a couple of cement sculptures, a few caryatids, and a rather sad crocodile with rusty steel reinforcing protruding from its side are a sad and half-hearted attempt to recreate the illusion. Blocks of clipped yew and pencil-thin junipers on the valley slopes around the Canopus are intended to give the impression of building structure. 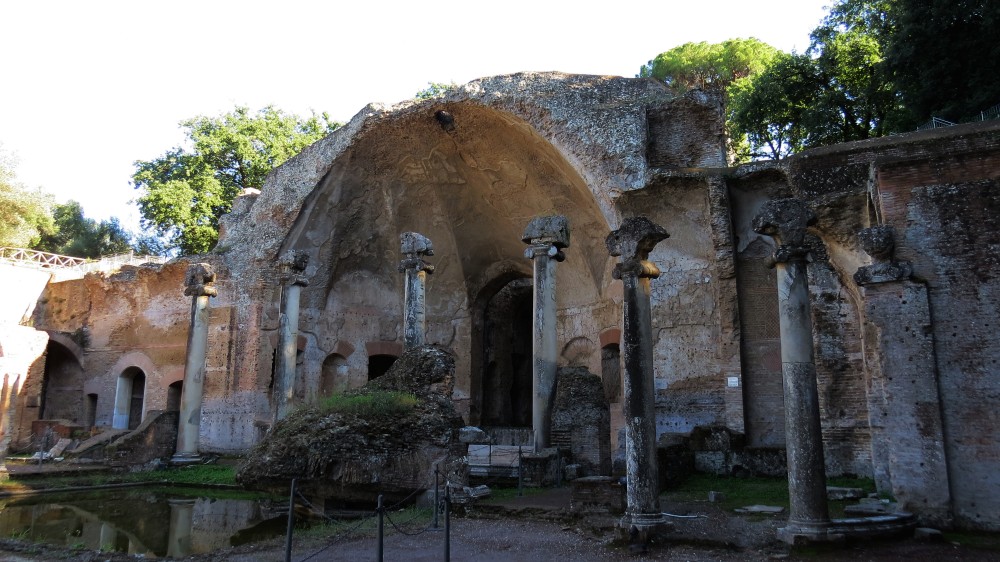 Everywhere the laminated signage shows 17th century engravings of the ruined Roman Villa, the long unrelieved paragraphs of academic and archaeological detail holding little interest to the internet generation who spend 30 seconds reading it before moving on. No attempt is made to bring this amazing UNESCO site to life with cinema presentations, interactive interest, or at the very least laminated boards showing the same view in 140AD soon after the Villa was constructed. 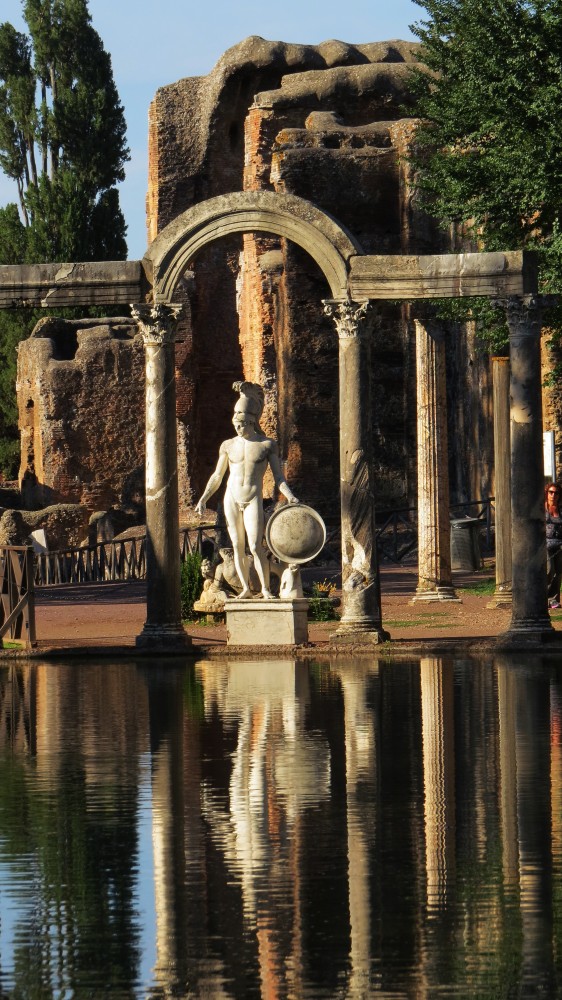 However, Villa Adriana does have a hidden and largely unknown surprise. In the last eight years of his life, Hadrian ran the vast empire, spanning three continents and over 40 modern-day countries from this palace. At times when the number of courtiers, supplicants, military, praetorians and slaves seemed overwhelming, he would withdraw for peace and reflection to the Maritime Theatre. This strange building is in the form of a circular courtyard surrounded by a portico with a barrel-vaulted roof. To the centre lies a pond with a large residential building built on an island, protected from intrusion by draw-bridges. Here Hadrian escaped the pressures and demands of his life. 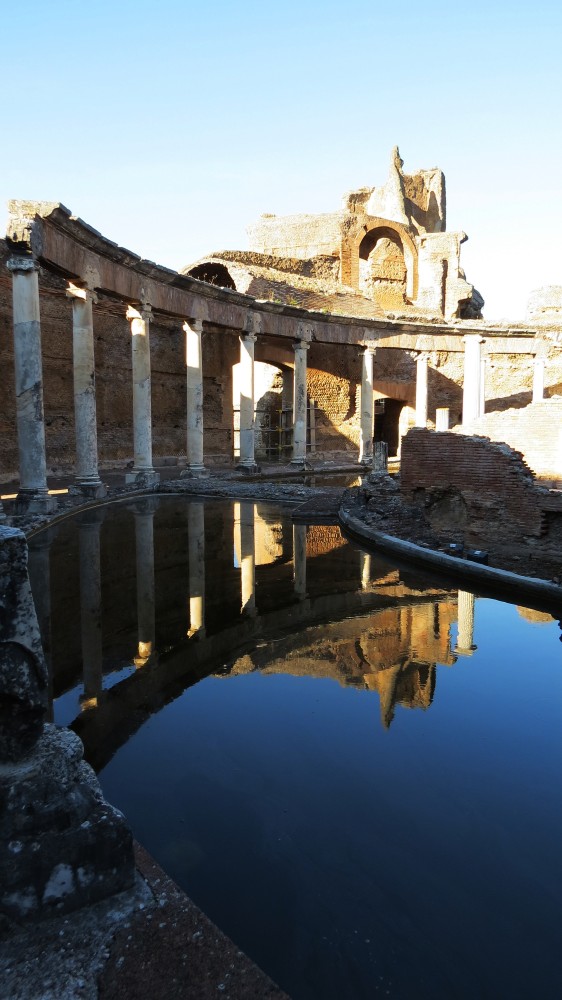 Villa Adriana, stripped of its surface beauty still has that sense of awesome power that impressed previous generations. Its careless grandeur is captivating, and the Canopus and Maritime Theatre give glimpses of Hadrian’s public and private life, and what courtyard garden areas may have looked like. Much has still to be excavated, and there may yet be future surprises in store.

Note: Open to the public on Plantsman’s Days and by special appointment