The most remarkable thing about my hotel on the outskirts of Frascati was to see the walls lined with dozens of period garden engravings. Expecting Villa d’Este to have the greatest prominence, I was surprised to find it eclipsed by a villa I knew very little about, Villa Aldobrandini. 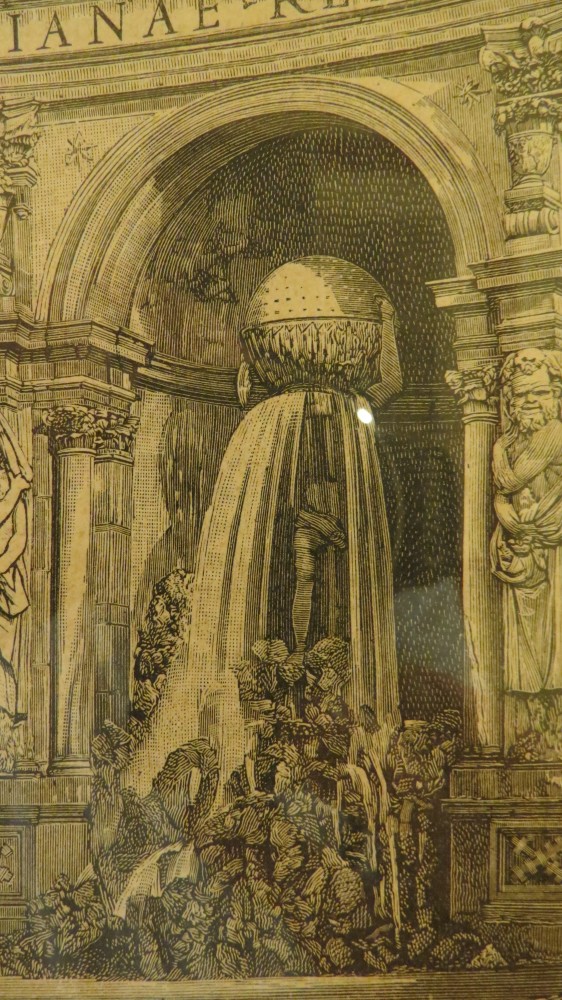 Engraving of the Atlas Fountain

Set on a steep hill dominating Frascati, Villa Aldobrandini is an overbearing Baroque stage set, an exercise in raw power that terminates a long avenue rising steeply from the town’s cathedral square. I noticed almost immediately that there was something odd about Frascati; which I knew to be an ancient settlement – where were the old buildings? Suspecting that something had happened in World War II, I needed to find out more. 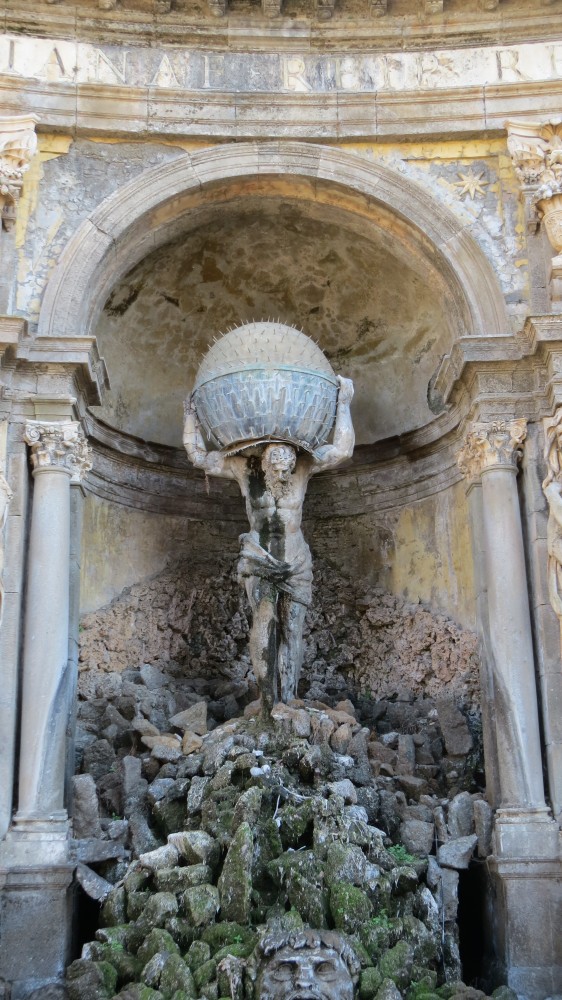 Frascati had the misfortune to be the German General Headquarters for the Mediterranean as well as the Italian Military Headquarters, both housed in various grand 16th and 17th century villas in the town. In September 1943, General Doolittle of the US Air Force instigated a bombing raid on Frascati to target the High Command and destroy the town. Over 50% of its buildings were wiped out, and Villa Aldobrandini and its garden badly damaged. 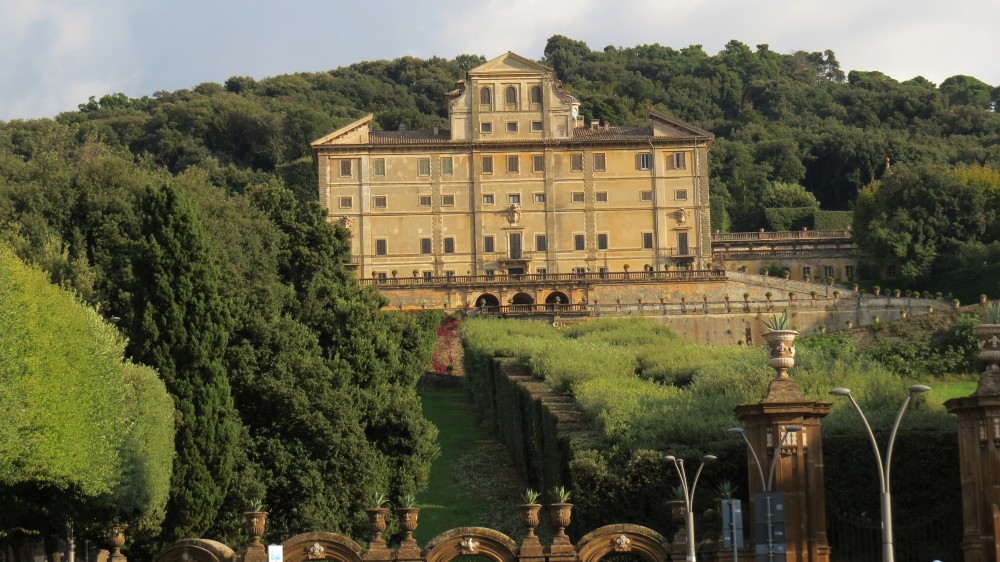 The Villa had been built as a massive advertisement for the prestige and wealth of its owner, Cardinal Pietro Aldobrandini, whose uncle was Pope Clement VIII, but it was the garden and in particular the Water Theatre that made it famous. Around 1600, Aldobrandini commenced the construction of an 8km aquaduct to bring a copious supply of water to his Villa, to other villas of lesser importance and to the town in general. 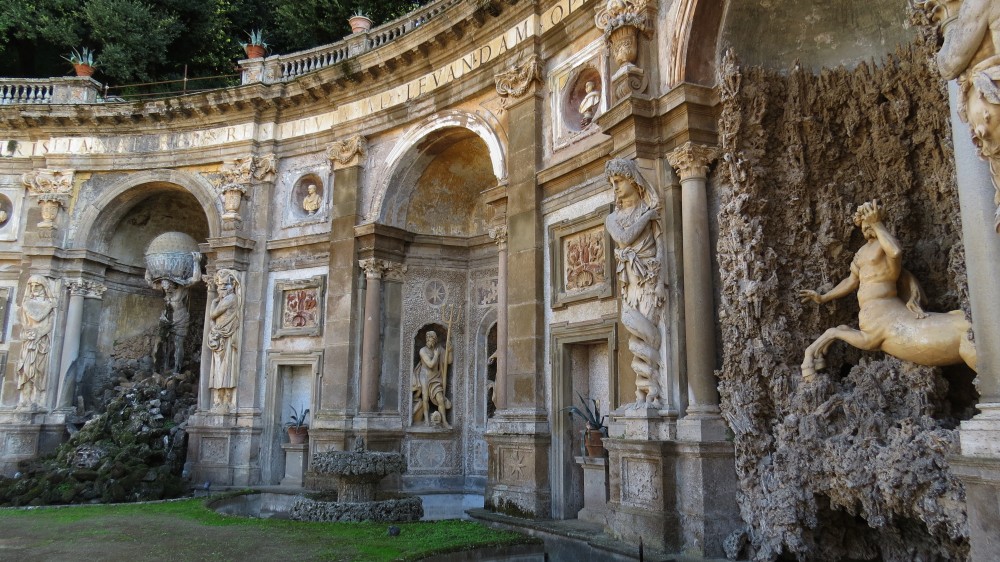 The Water Theatre lies behind the Villa and forms a large two-storey high curved stone wall with apses and statues (- the crowning row of statues were carried off as part of Napoleon’s booty). It is a stupendous piece of Baroque showmanship enclosing a large courtyard facing the more domestic rear facade of the Villa. Climbing to the head of the garden, at the top of a steeply wooded hill immediately behind the Villa, I found the dried-up waterfall from where a torrent had crashed down through various features into a water staircase immediately above the Theatre. 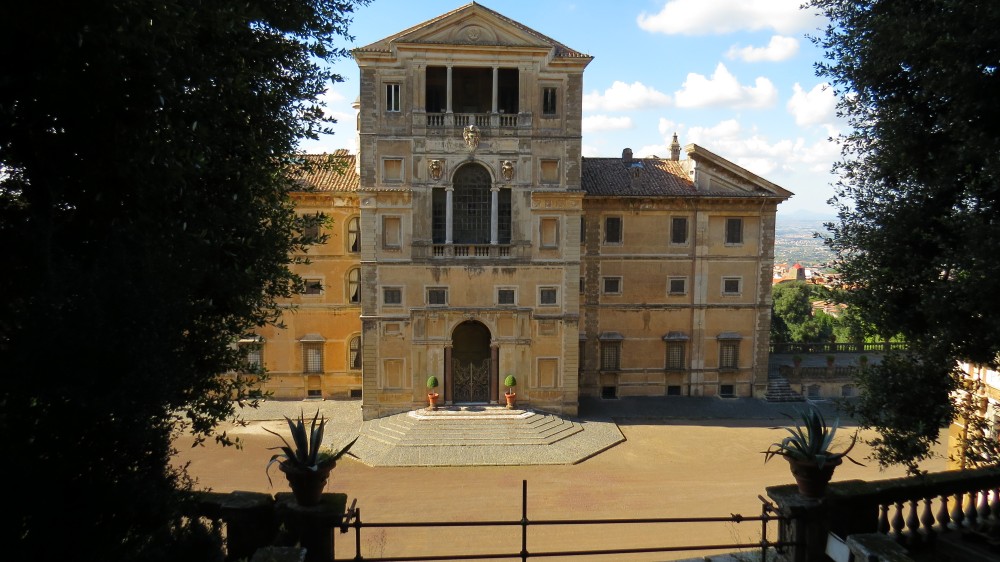 Rear Facade of the Villa and Courtyard

Once in the Theatre, a whole range of water tricks and theatrical effects were performed for the astonished guests. Stone centaurs sounded horns, Pan played his pipes, lions roared, and of course surprise jets of water soaked guests; and there was a musical water organ without which no Baroque garden of any standing was complete. Such sophisticated water engineering required a high level of maintenance and commitment by the owners. 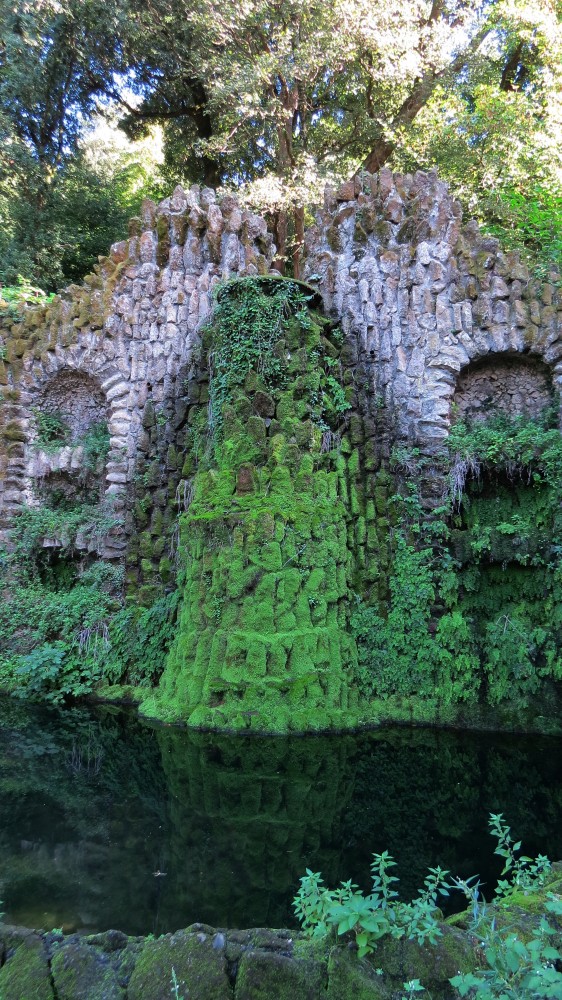 The Villa is still owned by the Aldobrandini family, and has been renovated as a family home and a venue for various functions, whilst the restored Water Theatre can accommodate up to 2000 guests for large outdoor events. The pumping chambers looked in good order, but as the fountains were turned off I couldn’t tell how many of the original features worked. Certainly from those engravings some are now defunct. 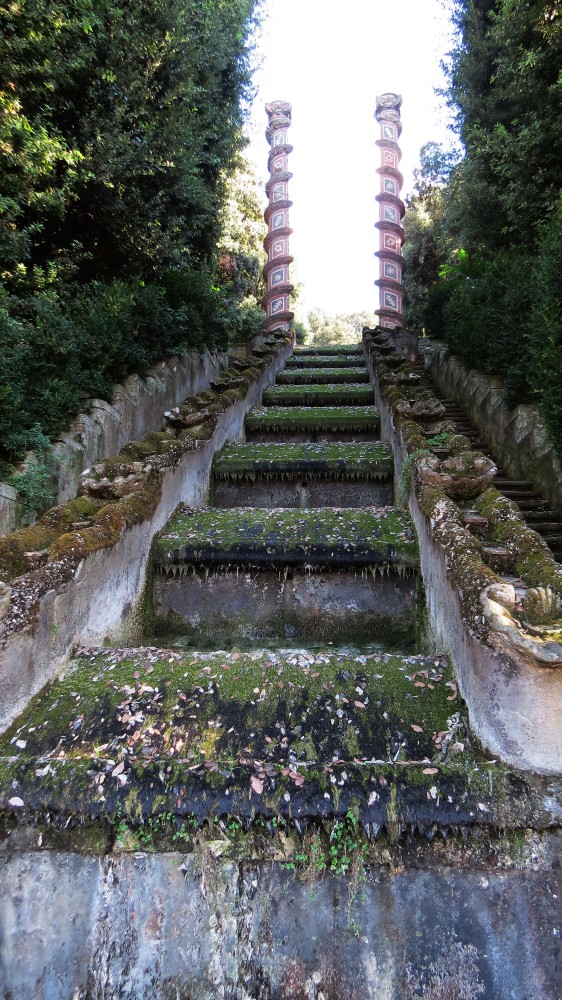 The rest of the garden with its water staircase, rustic bridges, waterfalls and ponds is gradually disintegrating despite some attempts to hold back its decline. I spent a couple of hours slithering around on steep dangerously muddy slopes, and fighting my way through lush tangles of undergrowth to get a closer look at the many garden features.

The Villa’s unique obsession is trimming mature evergreen oaks into two- and three-storey high hedges. On the day of my visit a gardener was carrying out this precarious task from a cherry-picker, a specialised skill on such a steeply sloping site. 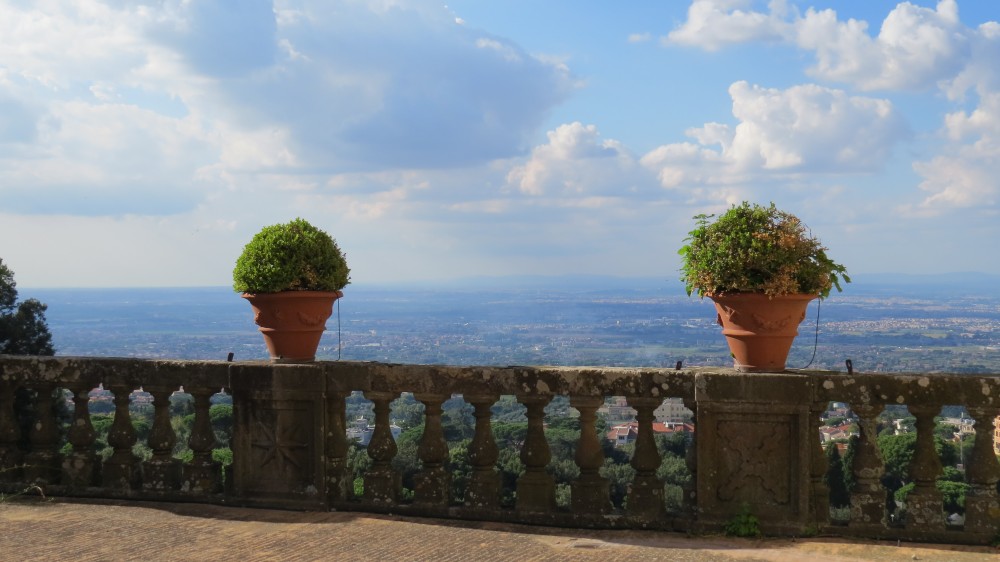 Villa Aldobrandini’s Water Theatre, now in its diminished state plays an important part in the commercial ventures of the Villa, but it is likely that the major investment needed to restore the rest of the garden is a price that the Aldobrandinis are not prepared to pay. Becoming a major commercially based tourist attraction catering for tens of thousands of visitors like neighbouring Villa d’Este is not everyone’s cup of tea. The future is likely to be the gentle continuing decay of the remainder of this remarkable garden and its eventual loss. A difficult decision for any owner to take.