Parking next to a family just leaving, I was witness to a small girl’s red-faced tantrum, accompanied by much stamping of feet. ‘But Mummy, we’ve just adopted it, ….WHY can’t I take it home?’ I looked quizzically at the exasperated mother. ‘We just paid to adopt a red squirrel,’ she whispered.

Although I had come to Pensthorpe to see Piet Oudolf’s Millennium Garden, it was the initiatives relating to ecological management of a landscape, bio-diversity, and breeding programmes for endangered species (including red squirrels) that were to impress me the most. 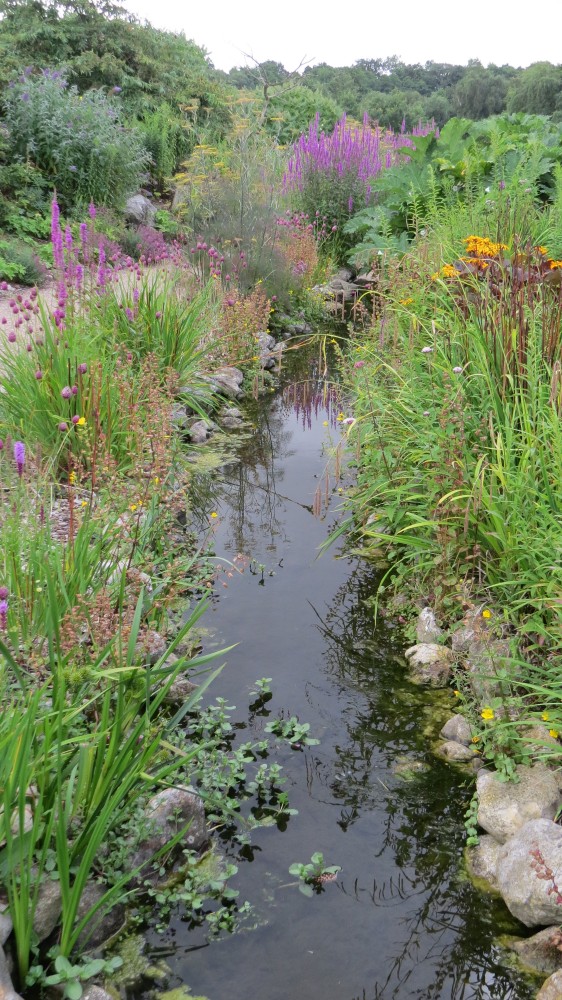 But this also feels like a landscape where the visitors are put first, with probably the best children’s playground I have seen, thoughtful access for mobility vehicles, great signage and interactive engagement, a good shop and first rate restaurant, all provided without overt commercialisation or any trace of elitism 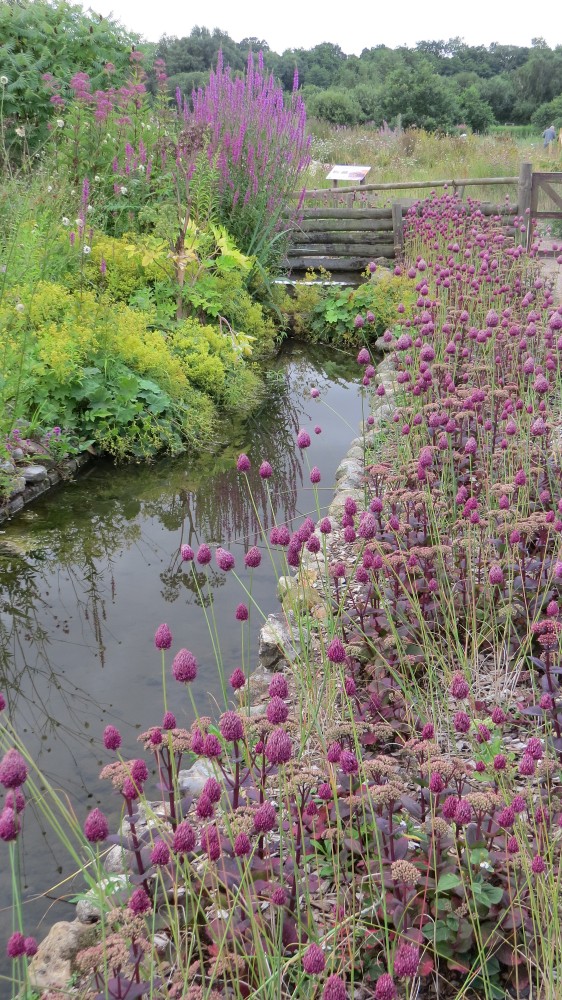 Pensthorpe lies across the upper reaches of the River Wensum, and it was gravel extraction in the 1970s that formed a patchwork of ponds and small lakes, now in a well-wooded setting. Initially created as a Waterfowl Trust, in 2003 under new owners its scope was widened to become The Pensthorpe Conservation Trust. A large significant site for migratory birds and wildfowl it has evolved into something much more exciting. 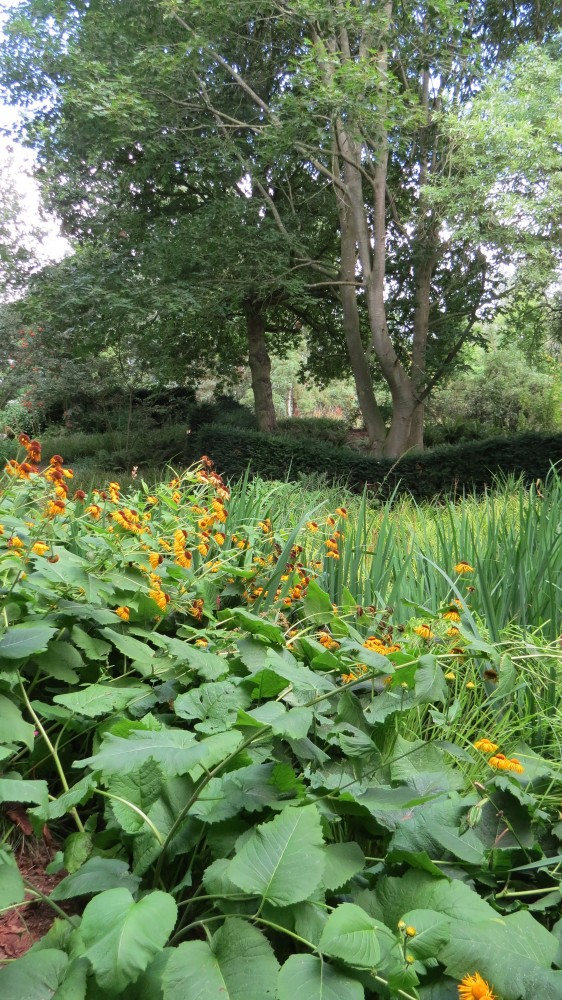 Farmland is now managed to Conservation Grade standards for Wildlife Friendly Farming with poor quality farmland turned into large wildflower meadows grazed by long-horn cattle. Hedges are cut in rotation to help provide food and shelter for birds and small mammals and fields left with wild ‘headlands’ to improve bio-diversity. In addition to wetland water management, fast-growing willow and hazel are coppiced to create differing habitats. 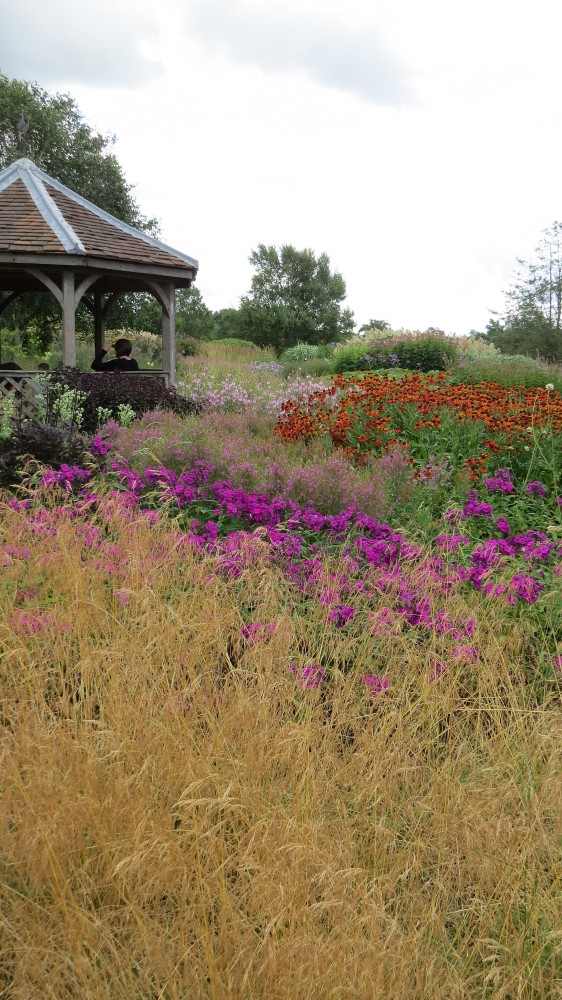 Sceptical as I was about the good intentions I found the exuberance of a truly natural habitat a revelation, bringing back memories of a country childhood. Firstly it was the large quantities of butterflies, bees and insects I noticed, then the varied and delightful birdsong (including skylarks). The almost tame wildfowl waddling around amongst the visitors were a delight for children, whilst overhead a couple of kestrels soared and dived. Here the garden areas are an essential working part of a complex foodchain, not the fanciful whim of a city-slicker. If anyone needs convincing that biodiversity can be recreated, send them to Pensthorpe. 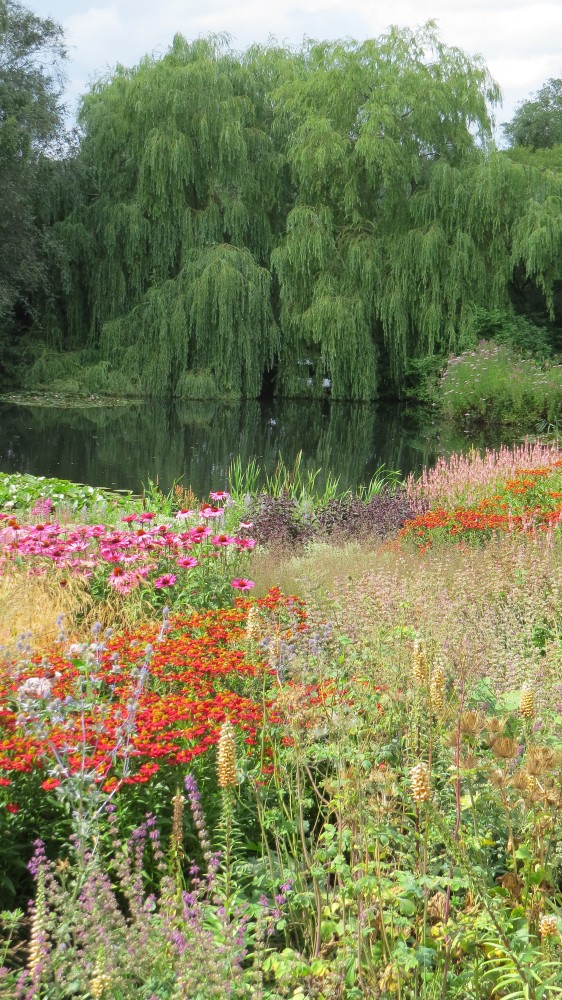 The gardens at Pensthorpe blend well with the wetland landscape, making a coherent whole, with the possible exception of parts of the first garden area, the Wildlife Habitat Garden. This had a domestic feel and served as an introduction to gardens and landscape, with helpful and practical examples for visitors on how to build wildlife friendly areas at home. Surprisingly (in view of the waddling ducks) the planting remained in good shape. The path then divided, with the Wave Garden to the left, providing late spring and early summer interest pollen and nectar, and to the right, the Millennium Garden with its peak performance in mid- to late-summer. 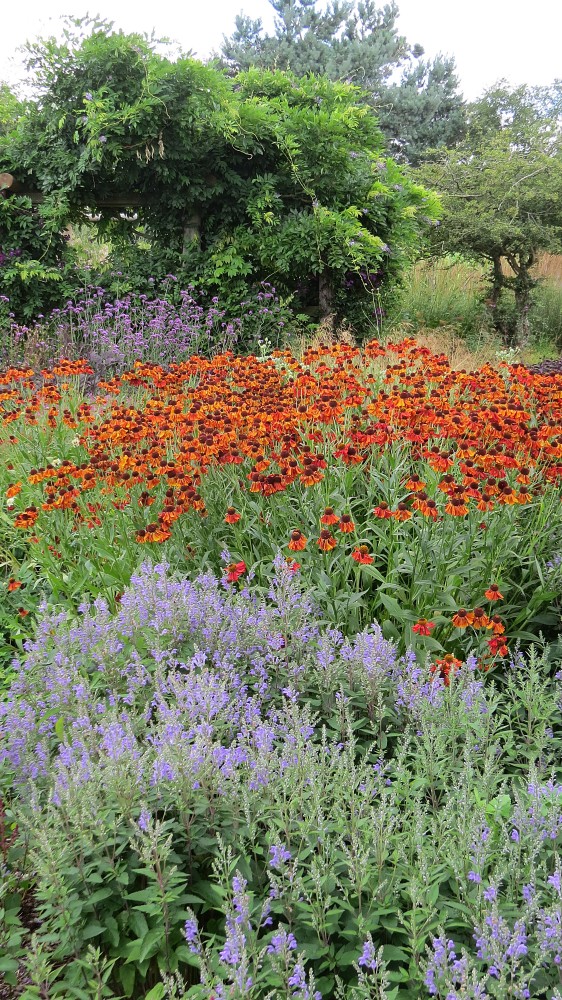 My visit was in mid-summer, and so it was not the best time to see the Wave Garden and the new Wave Line Garden extending down to the lake. The name derives from the undulating yew hedges that form the structure of this woodland garden with its shade-loving ground cover, and canopy of oak, pine and birch.

Retracing my steps, I walked across to the Millennium Garden which I find to be more successful than Oudolf’s later prairie-style gardens. It is an intimate space enclosed by belts of existing trees, with hummocky slopes leading down from an open-sided shelter to another focal point, a smallish pond. Walking down and around the winding gravel paths, the planting is viewed as an undulating flowering and grassy field providing seasonal nectar, pollen and seeds. 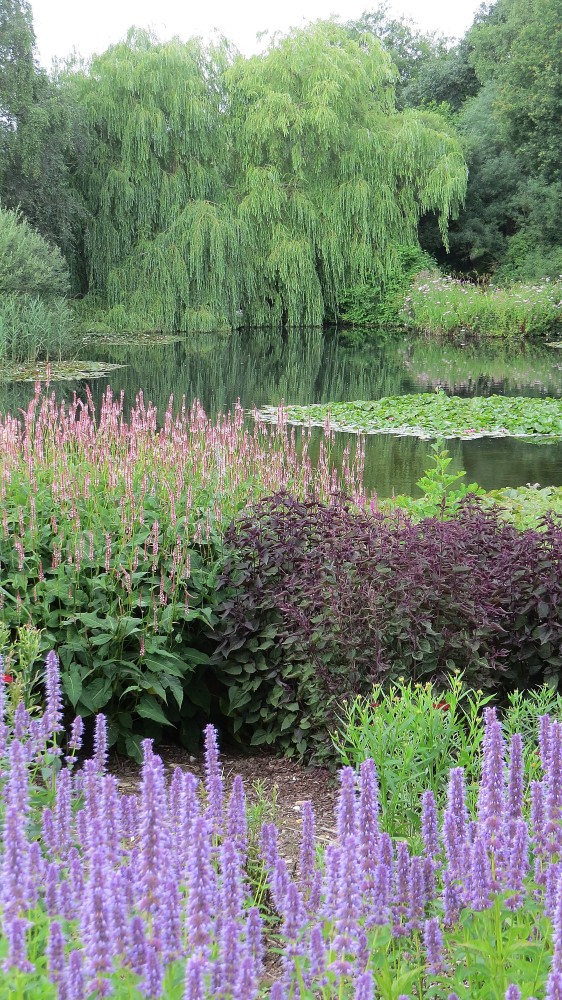 At Pensthorpe, the highest standards have been reached in complex landscape management, but in a manner that is very engaging to the visitors. The garden areas and landscape fit comfortably together, and the significance of every part of the natural food chain is made apparent as at few other places. For the visitor, the quantity and variety of wildlife, as well as beauty of the garden areas is a joy and a testament to the success of this holistic approach to biodiversity.