For too long I have been pussyfooting around avoiding the big beasts of the garden world. Time to man up, Richard. Villa d’Este is to my mind Italy’s finest, and one of the world’s greatest gardens, and words and pictures barely do it justice. Visting Villa d’Este is a sensory explosion. It could be vulgar, but it is not. 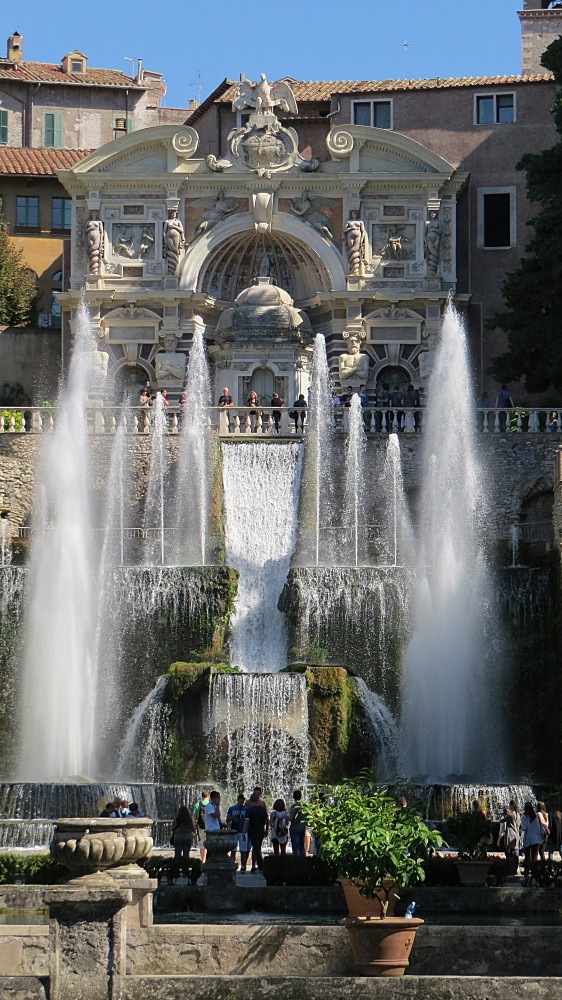 The Fountain of Neptune

But what we see today is not what Cardinal Ippolito II d’Este built in the 1560s, it is the gentler, more romantic picturesque garden that so impressed late 17th century visitors and those on the 18th century Grand Tour. It was one of Europe’s most influential gardens but by the late 1600s the garden was already neglected, and spreading mosses and limestone deposits were wearing away the fine decorative detail. 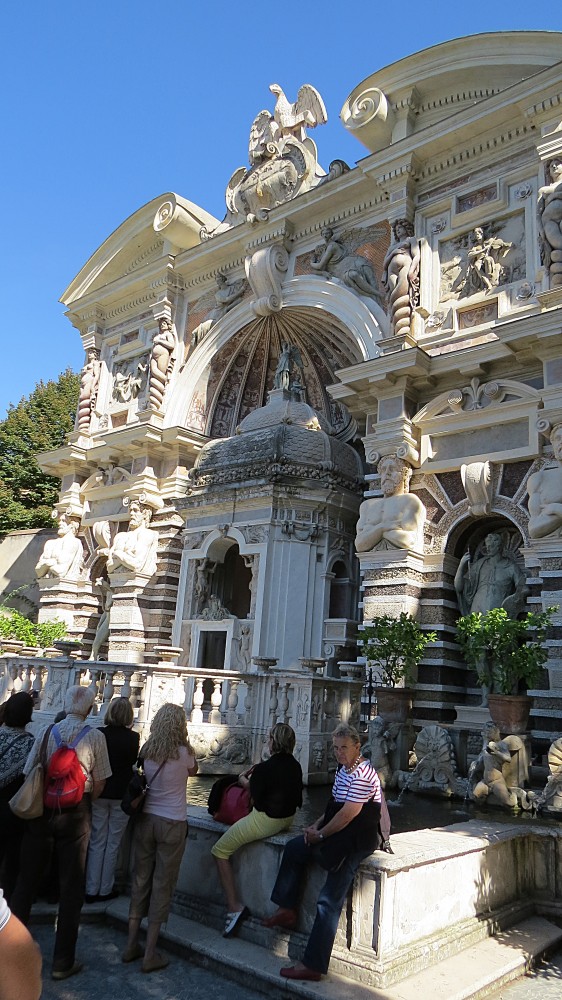 I was surprised how the recently restored Fountain of the Owl looked so sharp-edged, crisp and out of place, like a feature in a theme-park, but all of Ippolito’s garden was once like this. It is difficult to imagine one of Villa d’Este’s most famous features, the pond-weed encrusted 130 metre long Hundred Fountains without its green mantle. Forest-sized trees have since grown up throughout the garden and counterbalance the scale of the fountains in a way that was never intended. 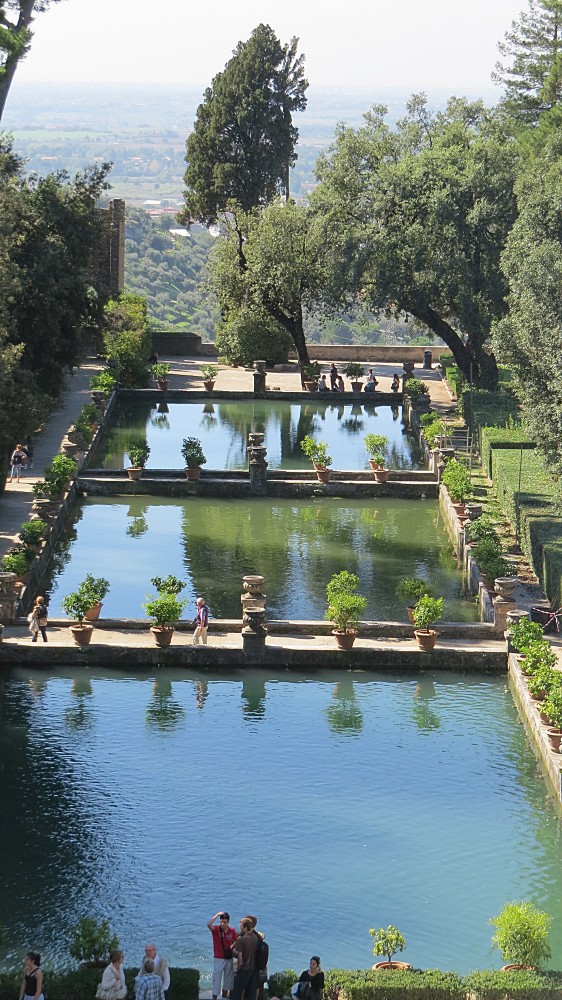 Ippolito d’Este was destined to follow his grandfather into the Church, and in the 17th century the papacy was the plaything of pushy Italian oligarchs. Few had the connections and wealth of the d’Este family. Ippolito’s mother was Lucrezia Borgia, his grandfather the despised and (unfairly) infamous pope Alexandrer VI; the family wealth being based upon cannon manufacture in their native Ferrara. 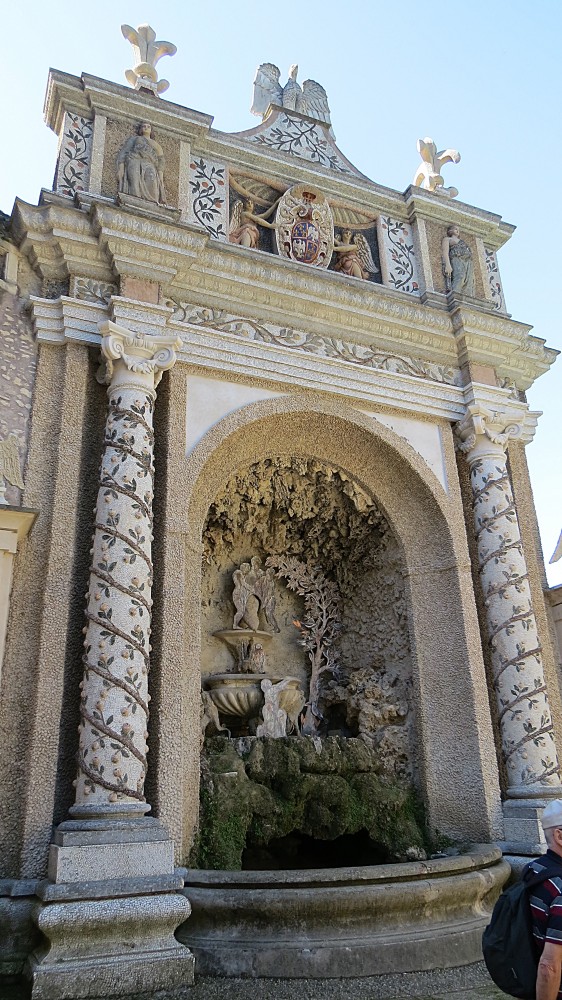 The Fountain of the Owl

A bishop by the age of two, and archbishop of the wealthy diocese of Milan at ten Ippolito had a very substantial income. But it was the papacy itself that he had in his sights, but time and time again he was thwarted by political in-fighting, and side-lined to be governor of Tivoli. Although well-connected, the Borgias as a Spanish family were looked down upon by their Italian counterparts, and because of French interference in Italian wars Ippolito’s connections to the French Court made him politically suspect. 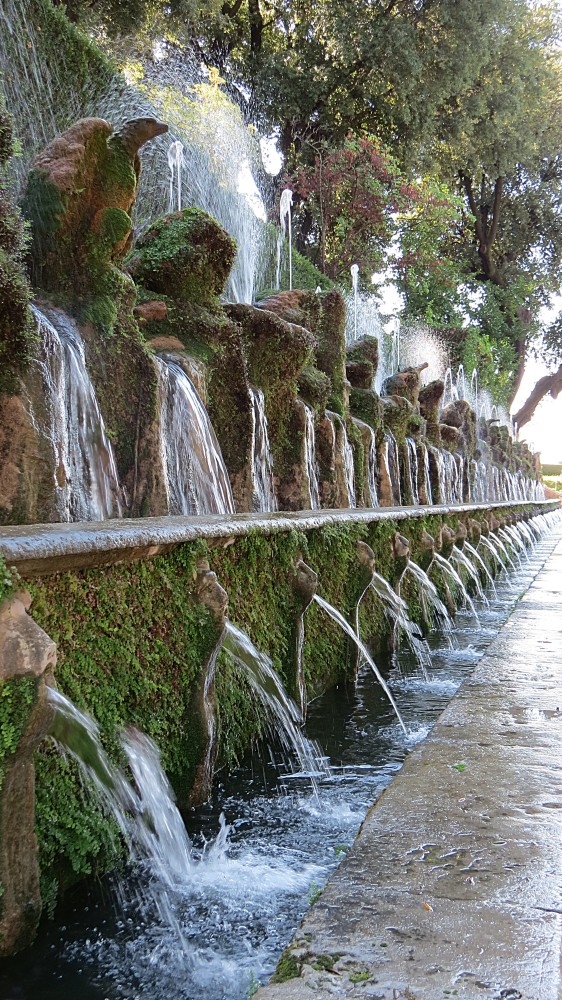 Appointed Ferrarese ambassador to the French king Francis I, Ippolito was exposed to Europe’s most brilliant 17th century court. Francis not only built the great palace and gardens at Fontainbleau and instigated the French Renaissance by attracting great Italian artists, but was a highly-educated humanist and great patron of the arts. It was this court that Ippolito decided to emulate at his lavish palaces in Rome and at Tivoli, attracting literati, poets and musicians and providing magnificently lavish entertainments, but it is his fabulous garden at Villa d’Este that is his lasting testament. 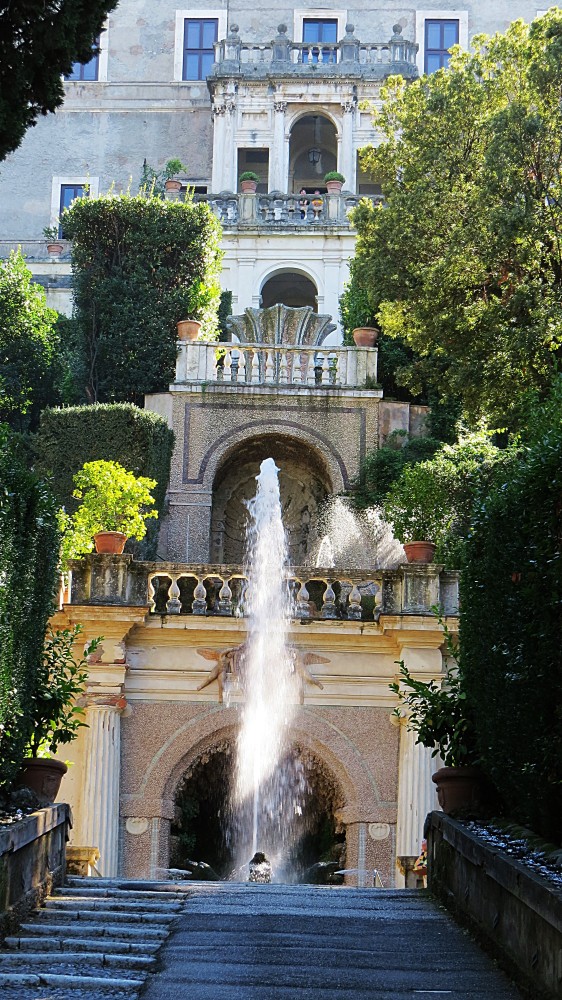 The Fountain of the Dragons

The garden was designed by architect Pirro Ligorio, who a few years earlier had been appointed superintendent of ancients monuments in Rome, and who excavated and plundered statues and stone from the neighbouring great Roman palace of Emperor Hadrian.

The re-discovery of the skills of Roman water hydraulics was to have a profound influence upon him, and Villa d’Este’s layout and most of the great and smaller features were to his design, aided by engineers Maccarone and French fountain expert Leclerc. The many statues Ligorio pilfered from Hadrian’s Villa and placed in the gardens at Villa d’Este have long since been dispersed to museums around Europe, but Ligorio’s great Oval Fountain, Water Organ and Hundred Fountains have survived intact. 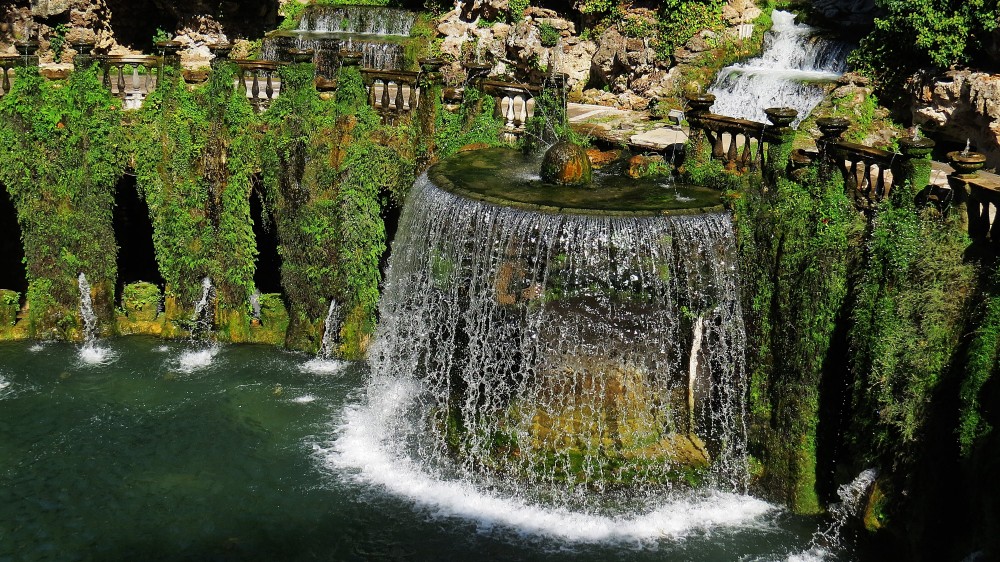 Villa d’Este’s most famous and astonishing fountain, the Fountain of Neptune was restored and rebuilt in a somewhat cavalier way in 1927. The 17th century design by Bernini for Ippolito’s successor, Cardinal Alessandro d’Este has been lost to history. 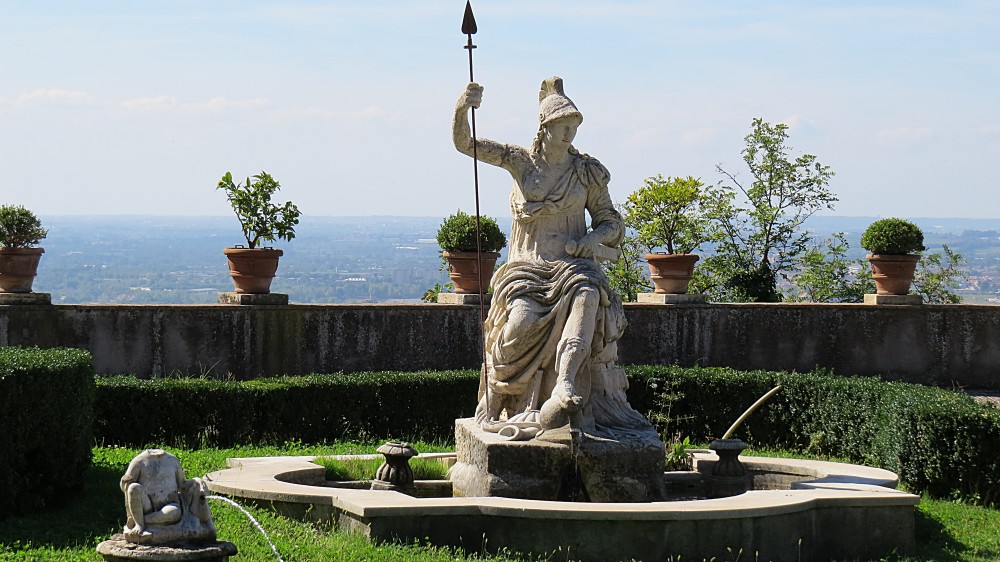 Roma Victorious above the Rometta Fountain

It is not just the scale and number of fountains at Villa d’Este that make it a great garden, but it is the skill and finesse of the details, the contrast between the exuberant water displays and the tranquil fishponds, between spectacular and intimate spaces, and the fabulous views over the Campagna. On the clear day I visited, I think that was the dome of St. Peter’s I could pick out in the distant blue haze over Rome?

Villa d’Este was never a gardener’s garden, but there are fewer flowers now than when it was first laid out and the formal parterres and mazes have not been recreated. To my mind the planting is incidental, and the lack of it doesn’t seem to matter. 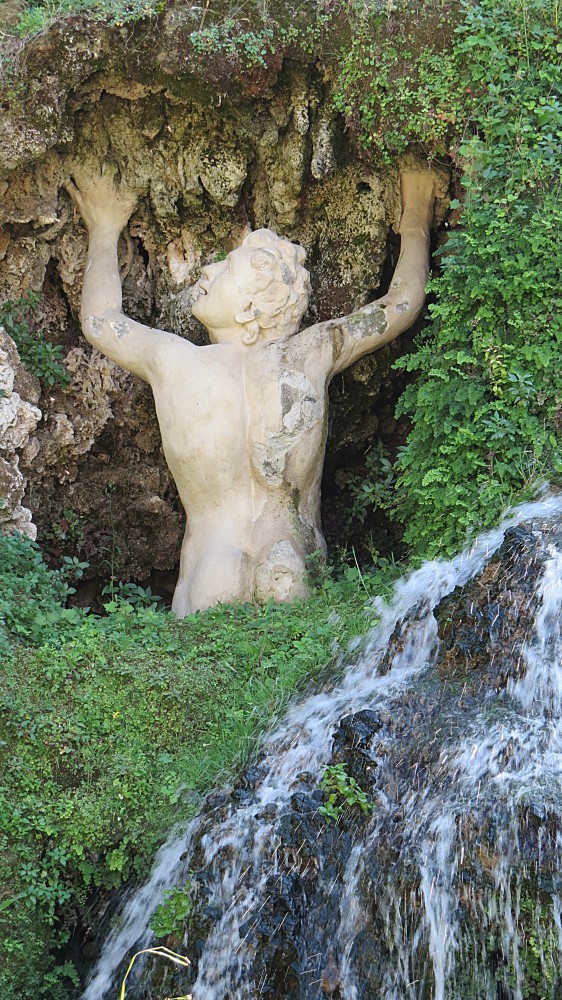 Detail of the Rometta Fountain

Visiting Villa d’Este comes with some words of warning. After heavy rains, the river that supplies the garden becomes muddy, and the fountains must be turned off to avoid blocked water jets and sediment getting into the complex pressure-fed water hydraulics. Some of the lesser water features, such as the delightful stair handrails are not working, and restoration is an enormous ongoing process. 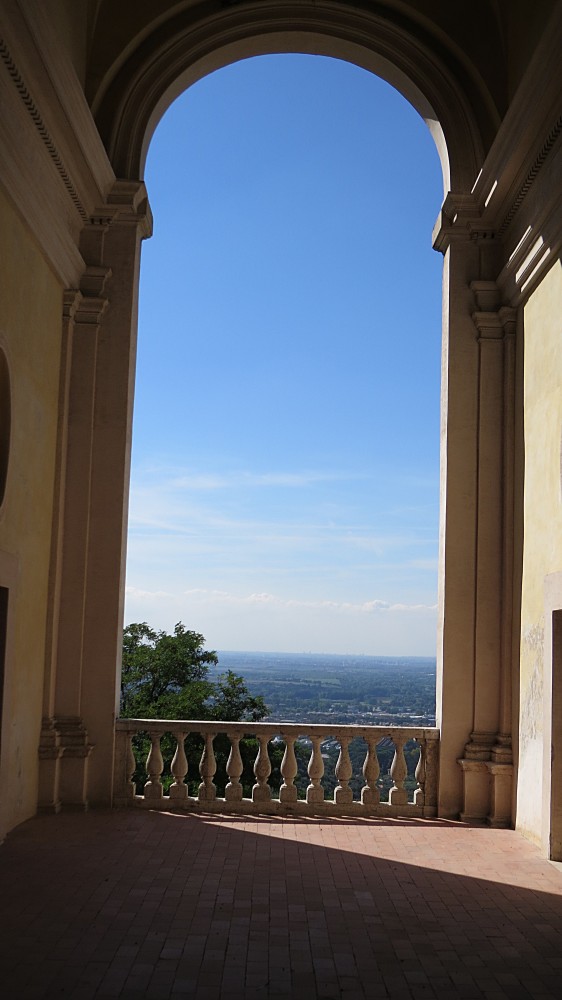 View over the Campagna

Only a short distance from Rome, roads are chaotic and crowded and public transport and parking poorly provided. The Villa is a honeypot for hundreds of thousands of visitors a year, but it is the Water Organ that attracts the crowds and much of the garden is delightfully empty. 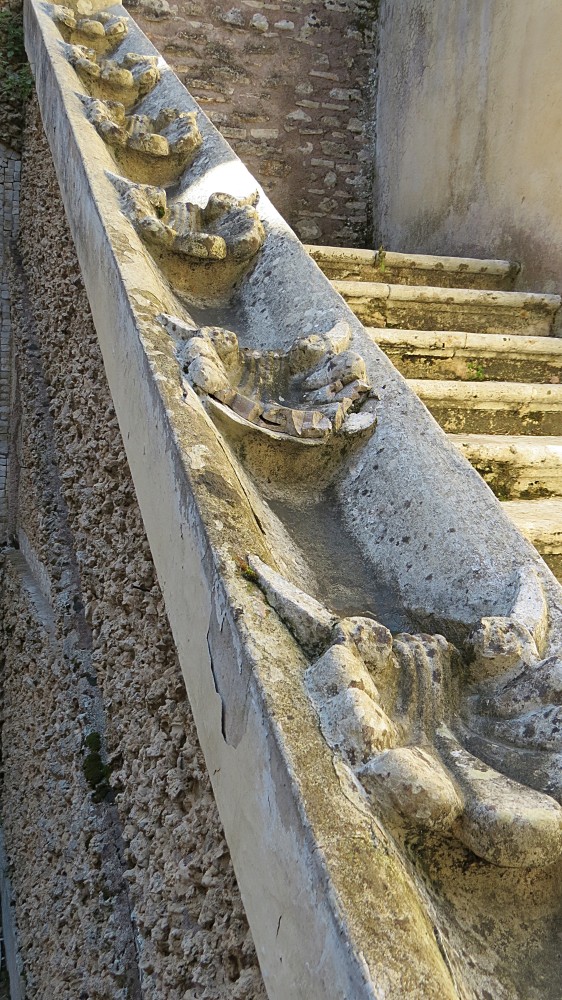 I couldn’t imagine a visit to Rome without a visit to Villa d’Este. It is a mind-changing experience. With each visit I am excited to find details I have previously missed and come away with a fuller understanding and clearer impression of this remarkable garden. I can’t wait to go back.