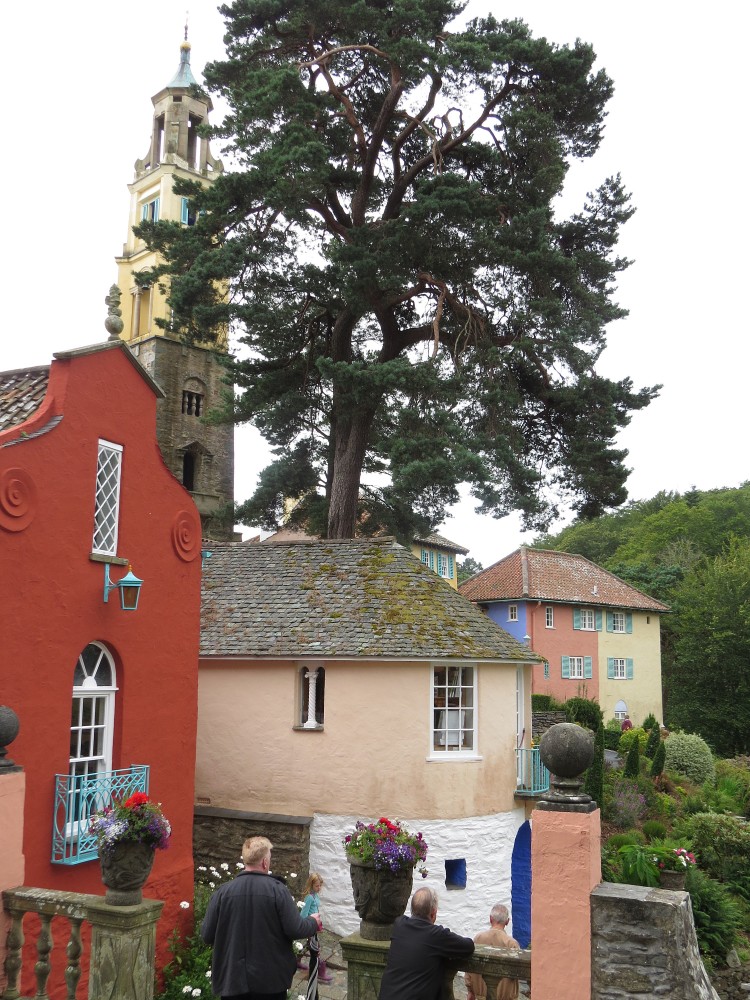 We get glimpses of what the past was like from what remains today, whether it is Bath’s Georgian crescents, Capability Brown’s landscapes, Hampstead Garden Suburb and Letchworth or the post-war New Towns. In all of these examples there was a vision of a different world from what was the norm at the time. 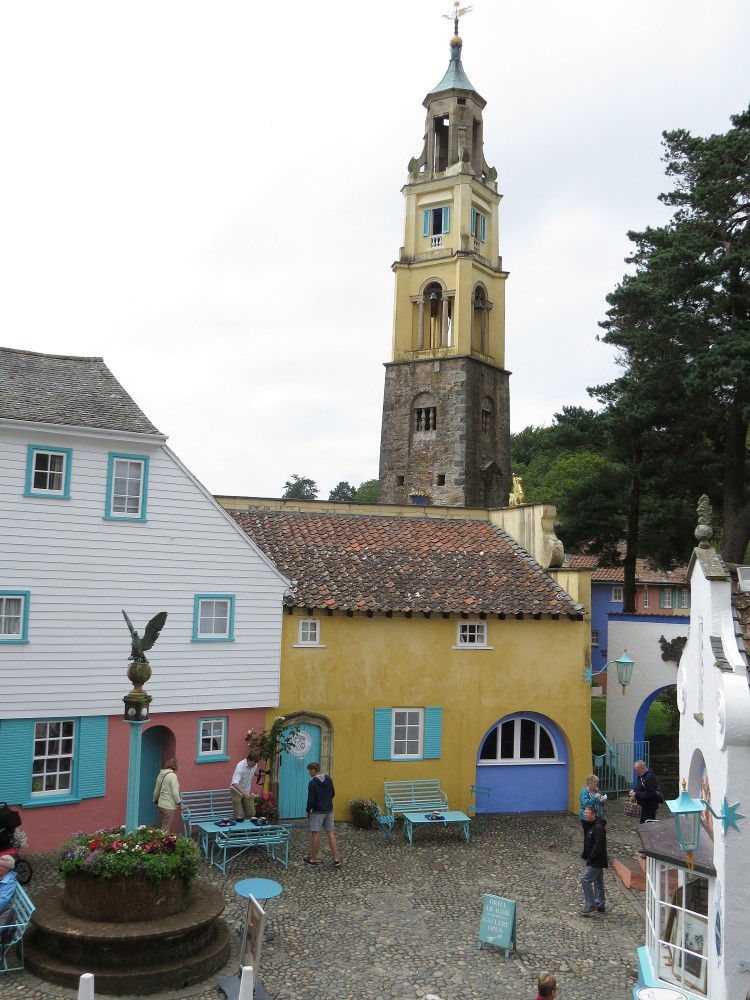 However these glimpses into a different reality are spoilt for us by satellite dishes and tv aerials, signage, advertising hoardings, modern corner shops, subsequent alterations and cars everywhere. You are always aware that you are in the present. 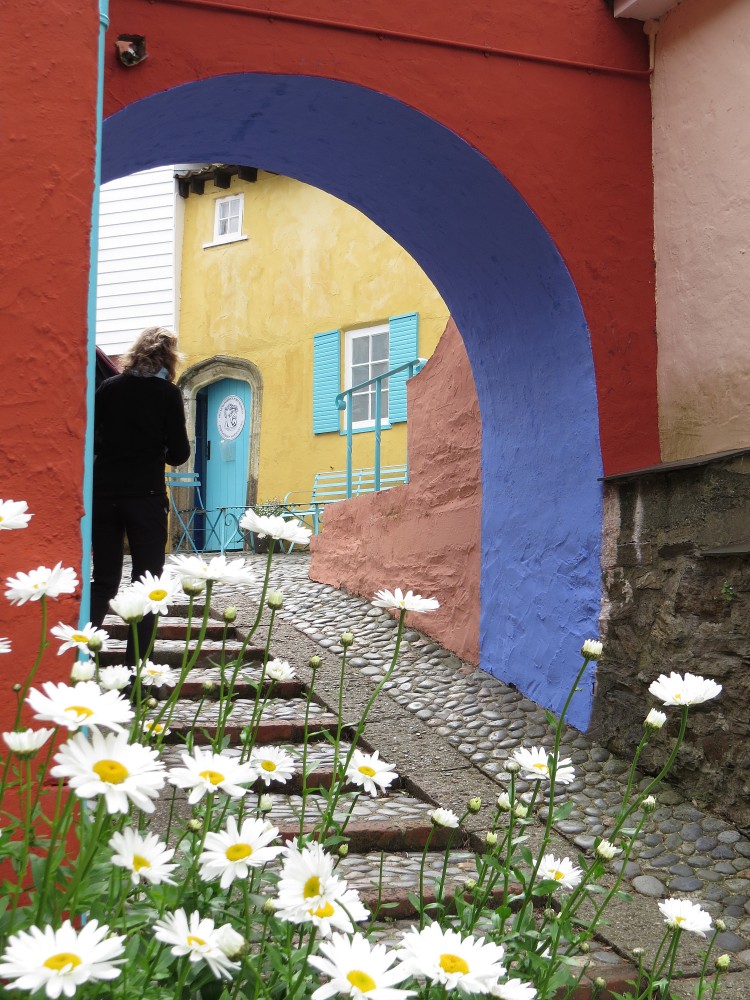 Portmeiron is different. It really is a visit to a parallel world and that is why it is one of Wales’ premier tourist destinations, although there is nothing much to do there apart from walk round, and have a bite to eat. Portmeiron is able to achieve this because the village was conceived architecturally as a whole, and is a private estate in the ownership of The Portmeiron Foundation, which imposes very strict conditions to preserve its unique identity. None of our pervasive 21st century clutter here ………….. 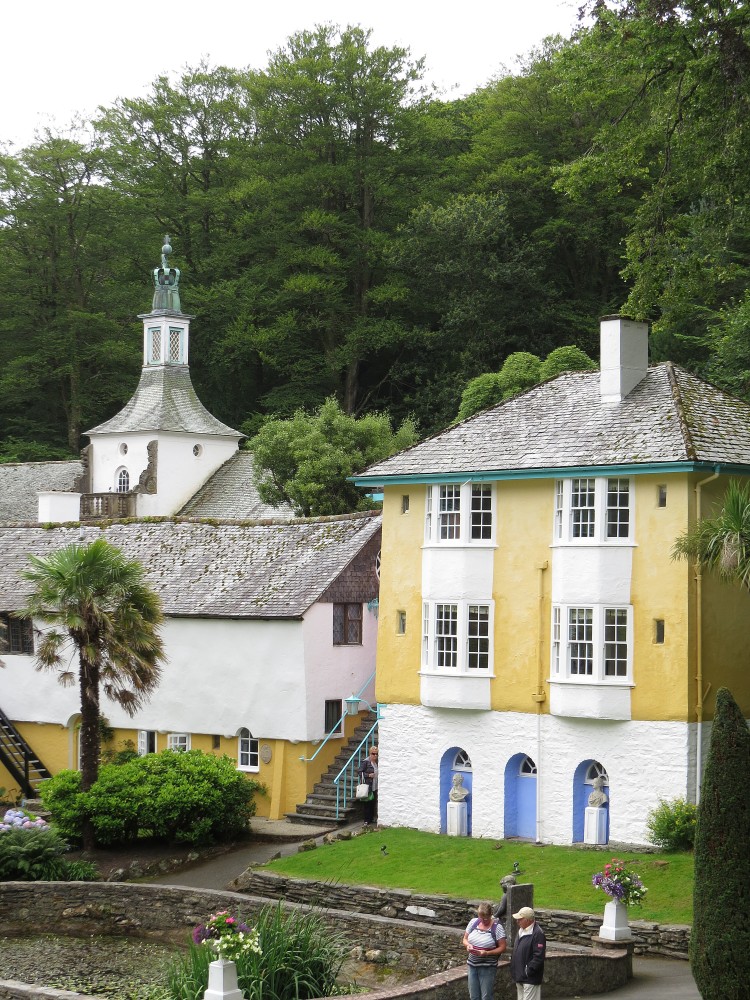 It was the dream of a wealthy eccentric architect, Sir Clough Williams-Ellis who was outraged by the direction of early 20th century modernist architecture and lack of concern for the rural environment. He felt that the cult of the machine was crushing the inventiveness and sense of playful delight in architecture and wanted to create a blueprint for a different future. Williams-Ellis, knighted for his work on setting up the National Parks, broadcast and wrote extensively about his alternative architectural vision and the fame of the village rests partly upon this, but also upon the success of the Portmeiron pottery and the iconic 1960s television series ‘The Prisoner’. 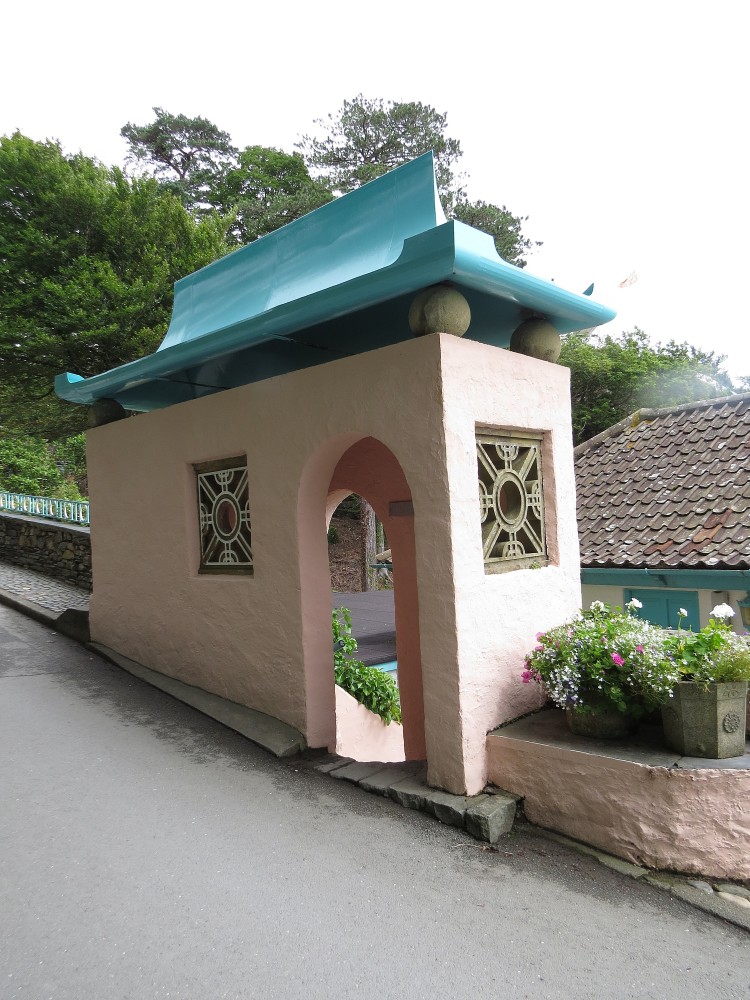 The pottery founded in 1960 by William-Ellis’s daughter Susan and her husband has proved to be a wonderful advertisement for Portmeiron. The production is located at Stoke-on-Trent and the runaway success of its ‘Botanic’ range has made Portmeiron known all over the world and enabled it to buy other famous brand names such as Royal Worcester and Spode. For those who have already visited Portmeiron it is a constant reminder to go back. 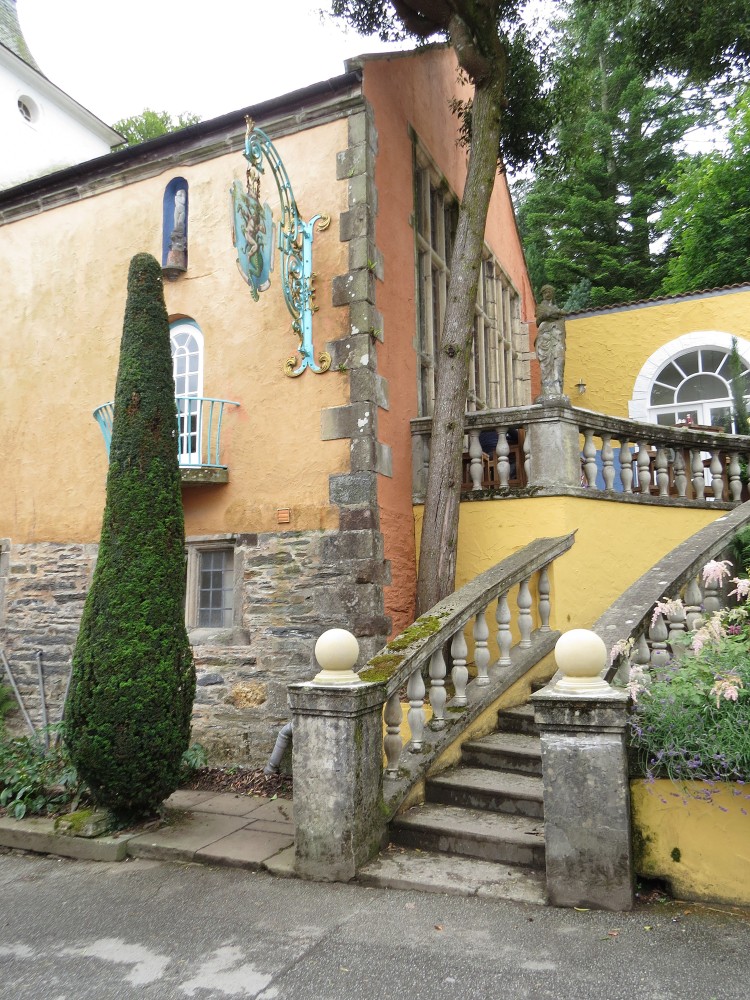 ‘The Prisoner’ meanwhile was an iconic 1960s television serial , starring Patrick McGoohan as a secret agent sent to a surreal village resort for rehabilitation and from which he repeatedly tries to escape. The village made an ideal location, and each year ‘The Prisoner’ conventions are held here attended by people from all over the world. 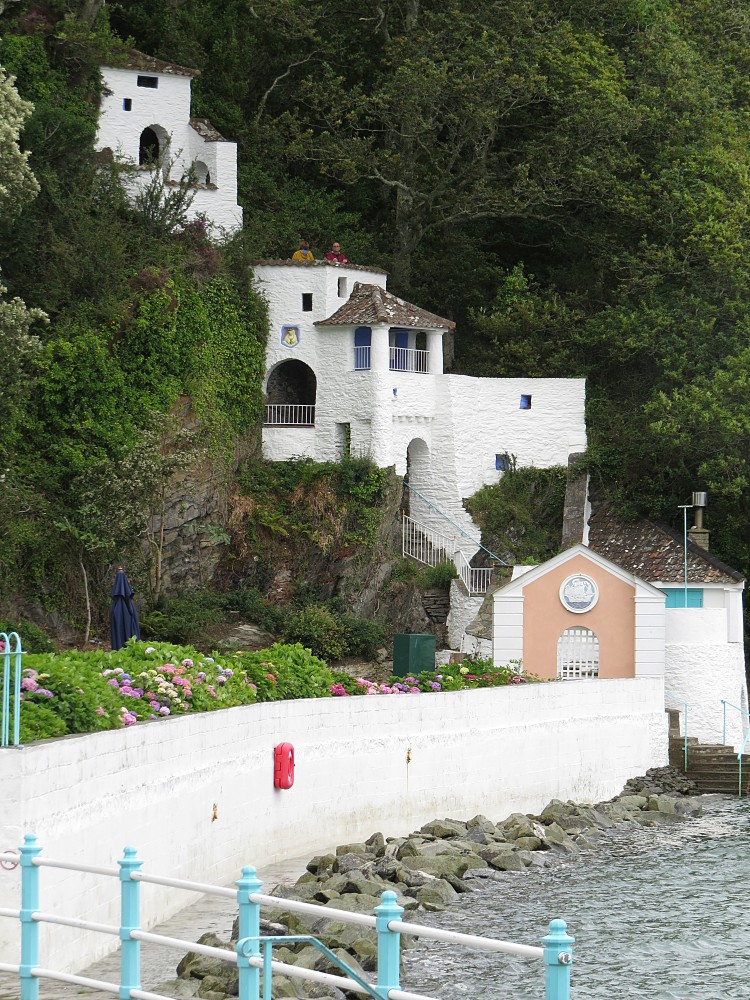 Portmeiron is an intensely romantic, quirky and playful place some say based loosely on Portofino on the Italian Riviera, something that Williams- Ellis always denied. Started in 1925 and with the interruption of the Second World War it was not completed until 1975. 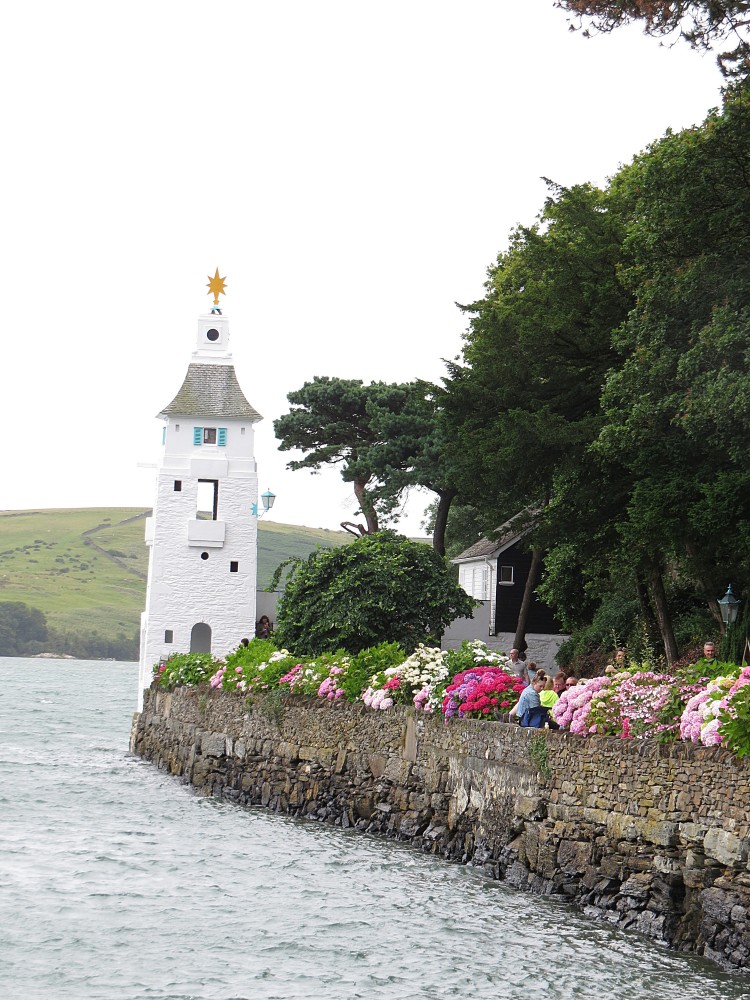 Built as a private holiday village on a peninsula projecting into the Traeth Bach tidal estuary, it consists of a pre-existing Victorian hotel and three cottages, to which have been added eleven self-catering cottages, a ‘town hall’, ‘fire station’ ‘lighthouse’ and other fanciful embellishments all arranged on the steeply falling hillsides. The large number of visitors allows restaurants, cafes and discreet souvenir shops to flourish, together with the extensive showroom for Portmeiron pottery.. 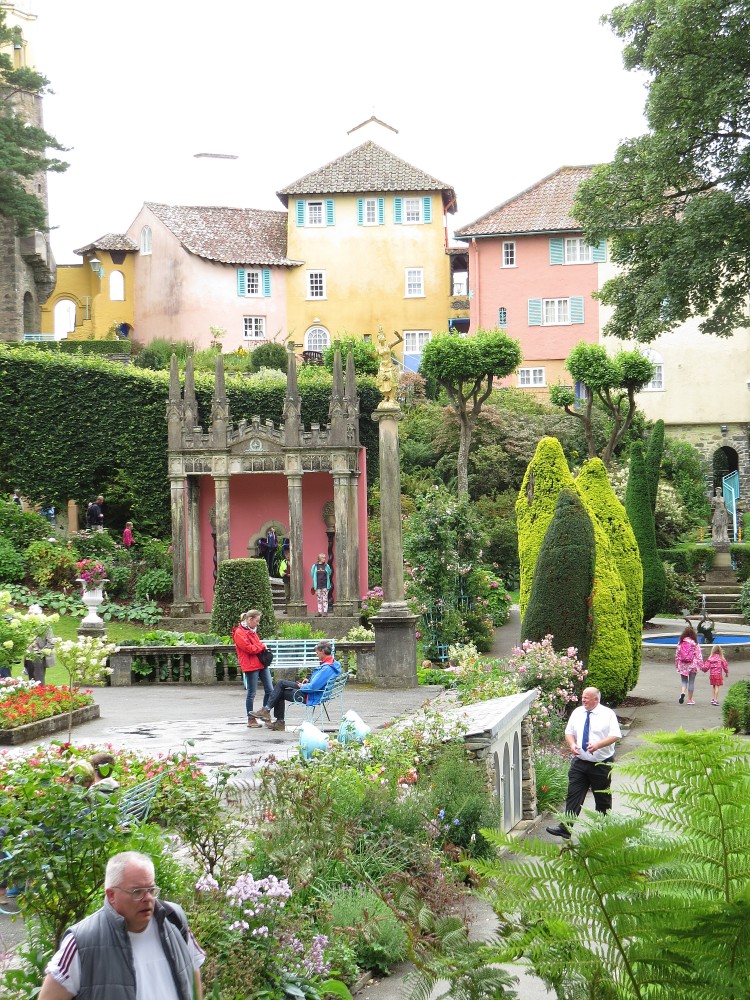 The best that can be said about the gardens is that the spaces work well, the hard landscaping detail is very good, and the architectural follies placed in them help to distract from the sky-blue painted pond and the municipal seaside style of planting. This sounds like a damning indictment but the village has good ‘bones,’ and it’s a great pity that the planting isn’t better thought out. The mild Gulf Stream climate would allow dense imaginative planting of lush sub-tropical species, an appropriate foil for the architectural style of the village. The surrounding 70 acres of woodland planted in the late 19th century makes for pleasant but steep walks 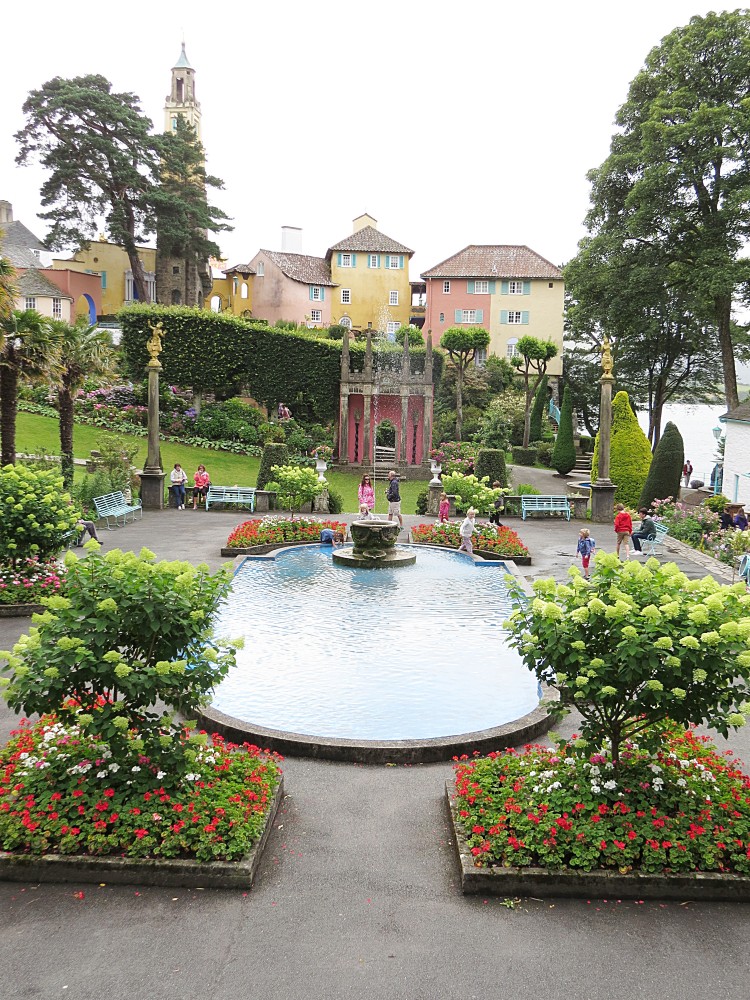 The village is more like a stage set than a vibrant living community, and the transience of the visitors and guests reinforces the sense of emptiness and its dream-like qualities. That said, it is a remarkable place. There are few gardens where setting, concept and design execution form such a strong and exciting composition, and where you do really feel you are stepping into a parallel universe.