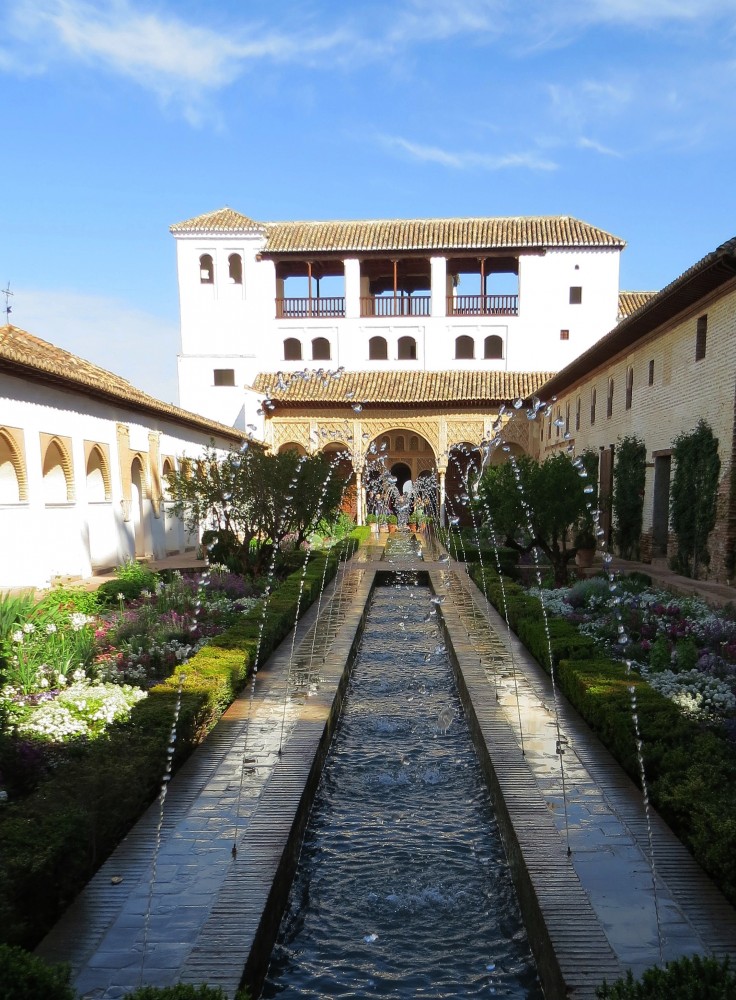 The Alhambra is Spain’s top tourist attraction, and although this covers a large hilltop site overlooking Granada, it is the three intact Nasrid palaces that the visitors head for. Surprisingly these are a series of small and intimate but exquisite detailed spaces, such as the famous Patio de los Leones {Court of the Lions) and the pressure of numbers makes the innate beauty and tranquillity difficult to capture. Large tour parties of different nationalities speedily stream through the haphazard arrangement of pavilions with their decorative pierced screens and belvederes that give spectacular views of the snow-capped Sierra Nevada mountains, the city and the large fertile plain beyond. It is a magical place where you wish you could spend time alone. 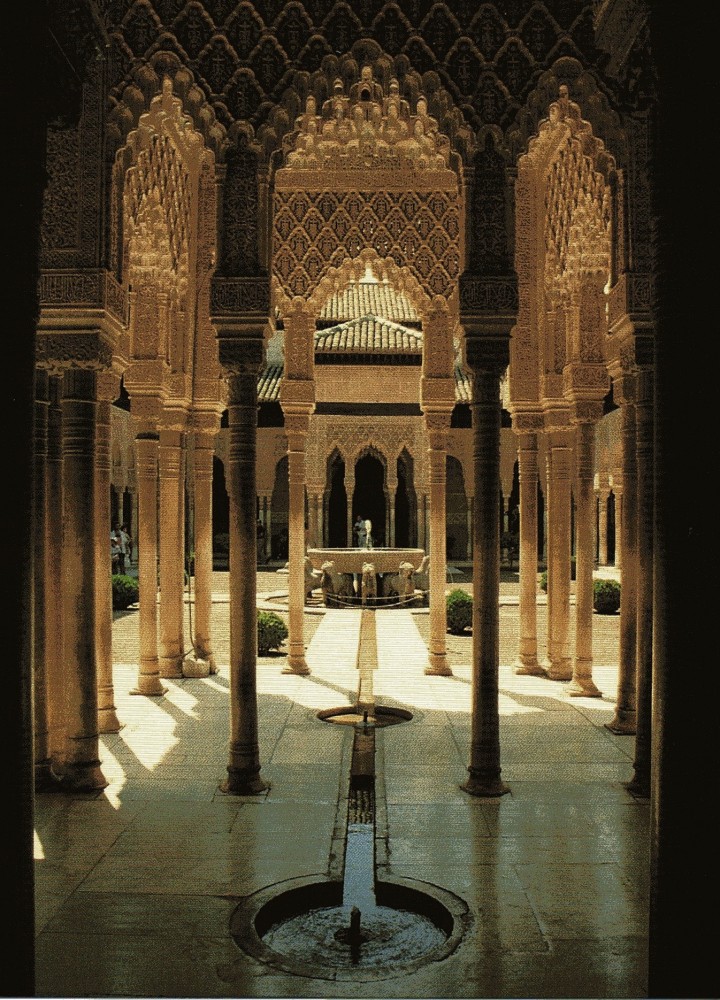 To the north lies El Partal (The Portico) all that remains of the fourth Nasrid palace. The adjacent gardens with their Moorish-inspired terraces, pools, rills and hedges were created in 1925 around the archaeological excavations of the rest of this palace. 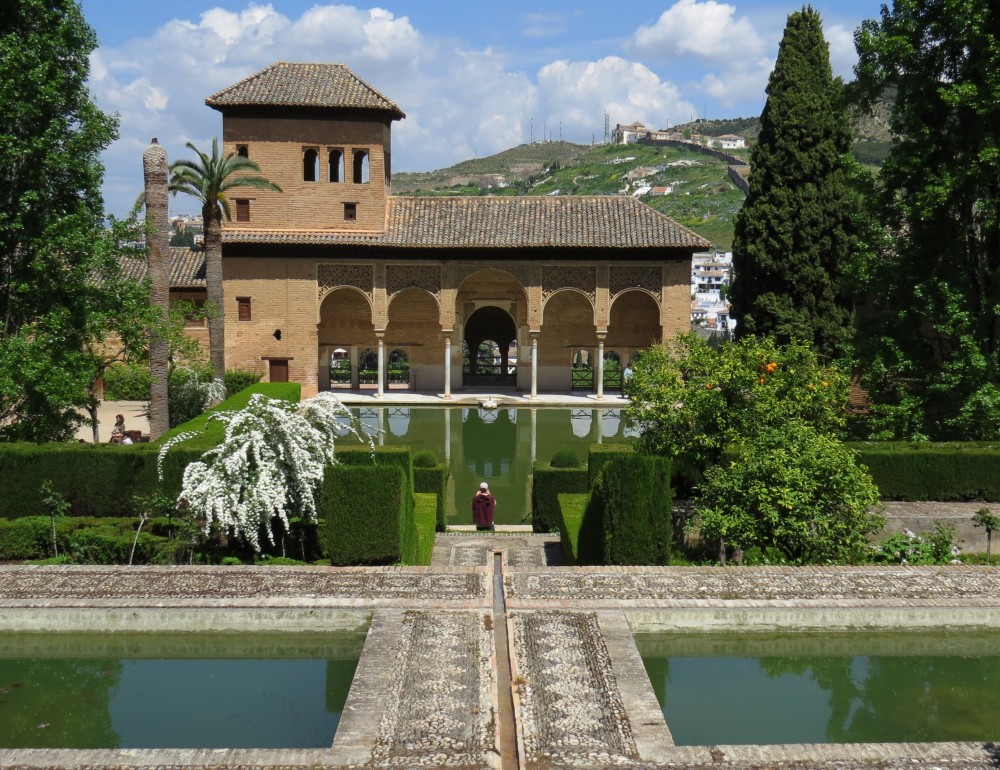 Knowing something of the history of the Alhambra and Generalife, I suspect that below the sense of calm of the many courtyards seethed a more sinister reality.  Under the Nasrid dynasty (1238-1492) the many children of the emir’s wives, concubines and slaves together with his brothers and uncles schemed and plotted to gain favour, attempted to discredit and humiliate their rivals, conspired to overthrow the emir, and consorted with Christian princes and Muslim emirs to gain power and territory even at the risk of starting civil war. It was a snake pit of intrigue that all but the strongest emir fell victim to. 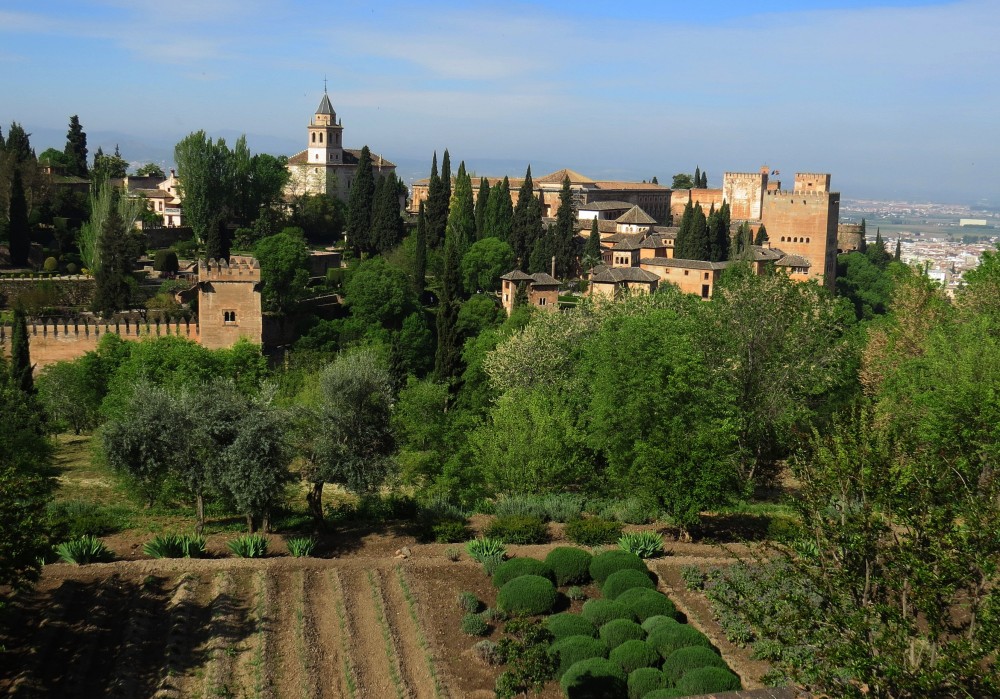 Valley looking across to the Alhambra

It was the tranquility of the Generalife (The Garden of Paradise), higher up the adjacent hillside that the emir and his immediate family escaped to especially during the searing heat of the Andalucian summer, away from the official duties and turmoil of the court. Built between 1302-1324 it was originally linked to the Nasrid palaces by a covered walkway across the head of the intervening ravine. This steep valley was used for cultivation of fruit and vegetables, whilst what is now the Upper Garden above the Generalife was laid out as olive groves. Thankfully most tour groups don’t include time for the Generalife on their busy itinerary and the palace and its gardens has a feeling of restful serenity. 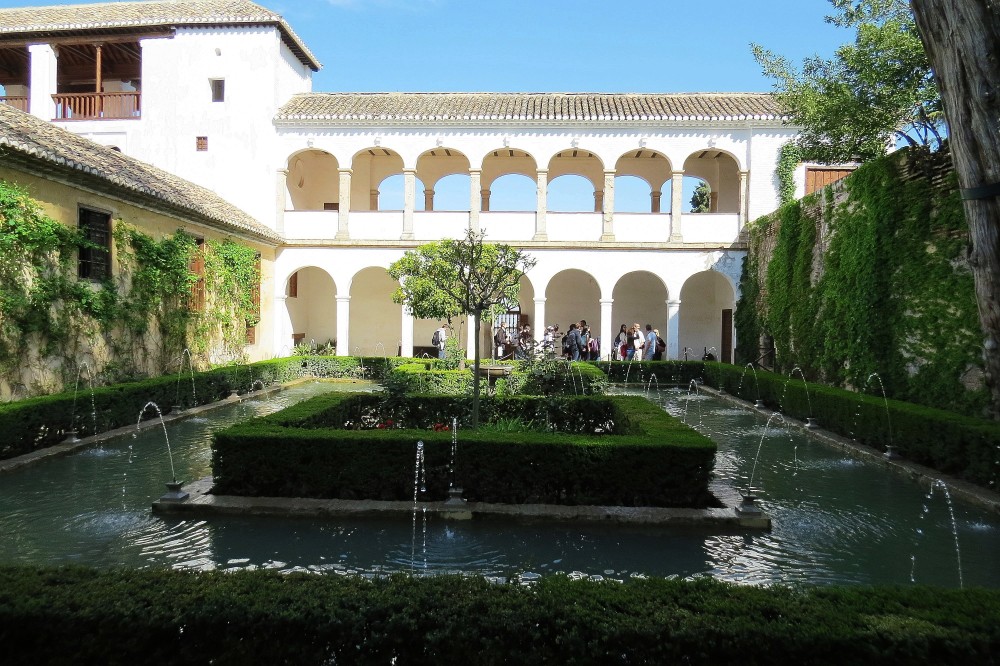 The Generalife fell into a state of neglect and disrepair following the conquest of Granada by Ferdinand and Isabella in 1492, but what we see today are the bones of Europe’s most complete Moorish garden. With the Muslim conquests, the concept of the Paradise Garden had spread from Persia in the 7th century to Morocco and thence Spain. The Persian word for ‘paradise’ means ‘walled enclosure’. 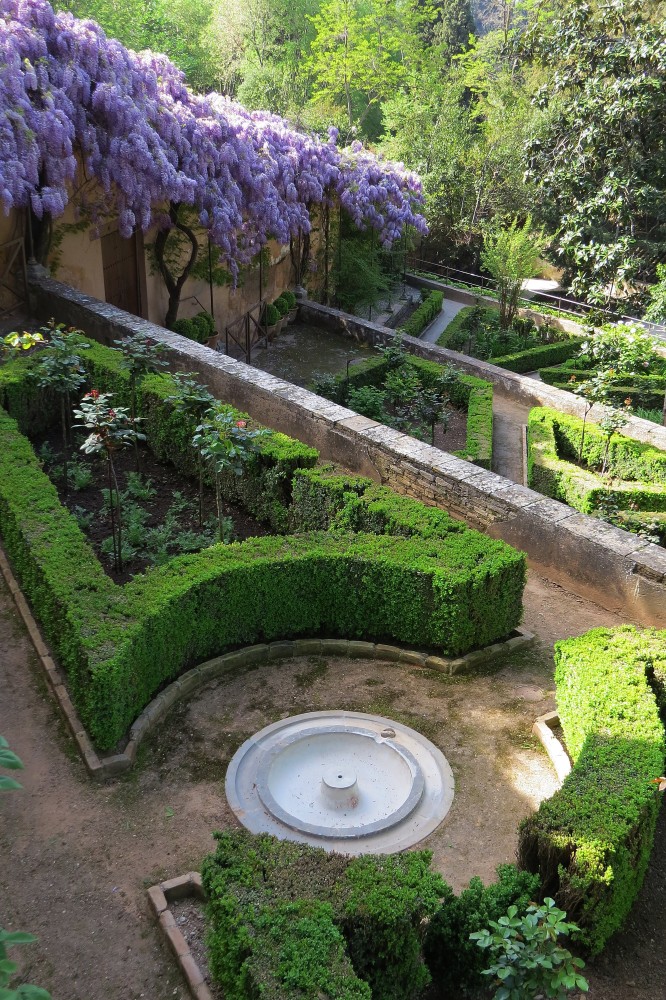 The Generalife has two main original garden areas, the Patio de la Acequia (Court of the Long Pond) and the Patio de la Sultana, and in addition the water staircase that rises to what is now the Upper Garden. Significant changes have been made to them all over the years.

Of these, the Patio de la Acequia has been altered most.The shady, secluded patios were originally cooled by running water from the Sierra Nevada mountains. The soothing sounds of gurgling and dribbling water created a sense of calmness. However, in the 18th century the double row of water jets that shoot and splash over the pond was introduced, and then later, in the 19th century arched windows were added to the wall overlooking the Alhambra. Upper floors were built to the solid, scantily decorated pavilions at each end of the garden along with a stone staircase and portico leading to the Upper Garden. 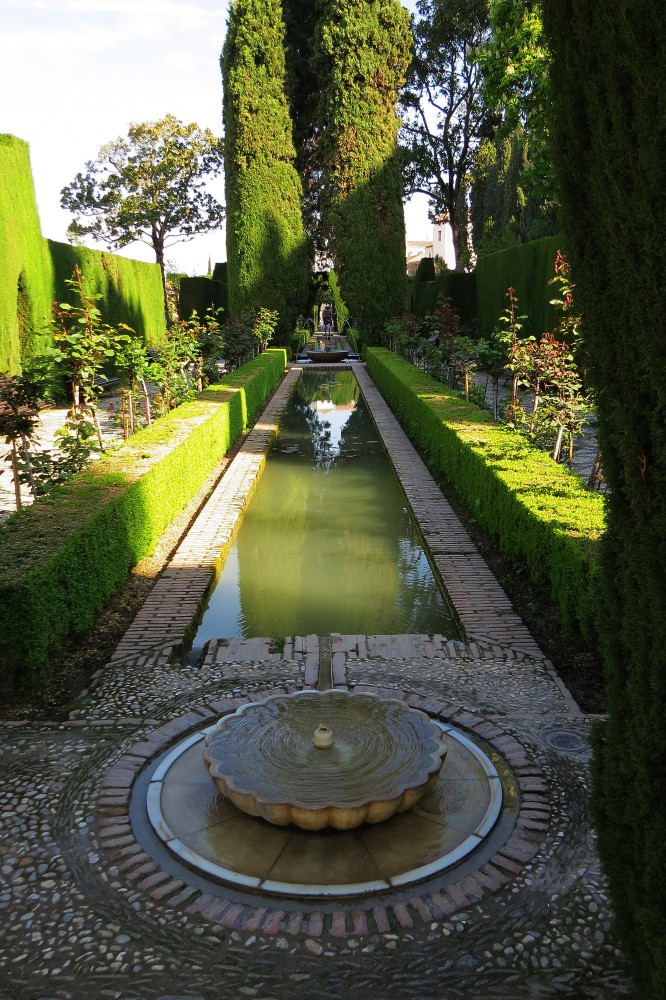 The replanting of the gardens of the Generalife dates from the 1950s and are by Francisco Prieto-Moreno who sympathetically included many elements believed to have been part of the original design such as the box parterres, and the beautiful and intricate designs of the black and white pebbled paving. The Lower and Upper Generalife Gardens were also designed at this time. 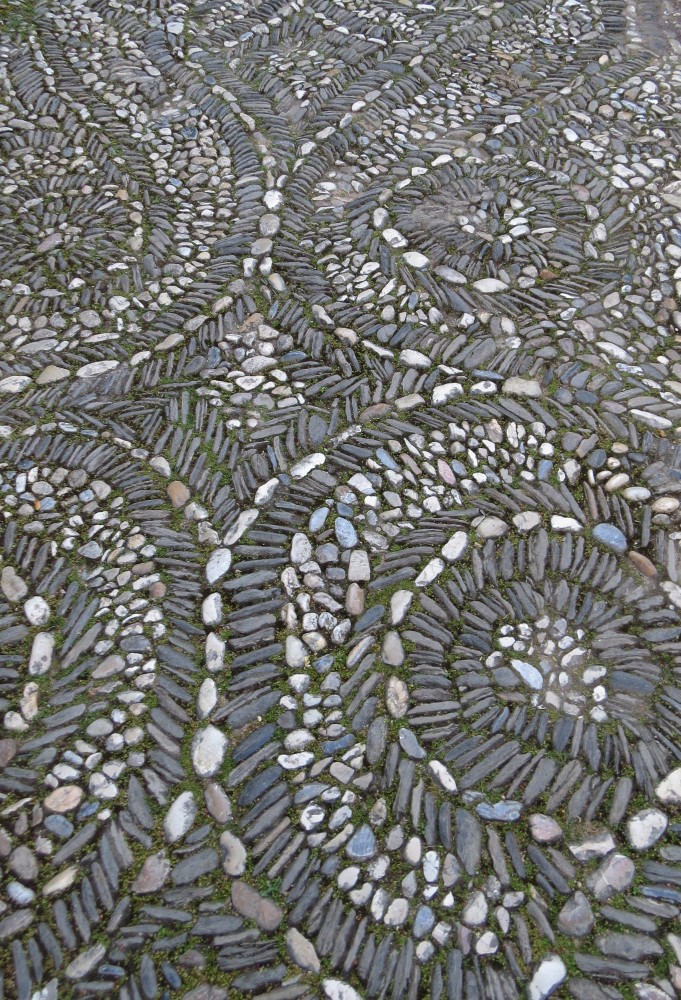 In this part of Andalucia the rapid onset of summer means that in mid-April the gardens look their best, the seasons telescoped together. Wisteria, tree paeonies, iris, chaenomeles, bergenia, spirea, jasmine, roses marigolds and stocks are all in full flower below a canopy of magnolia grandiflora, acacias and cercis. Such profusion may be too historically inaccurate for the garden historian but to the designer, and I’m sure the garden visitor, it is something to be happily enjoyed. 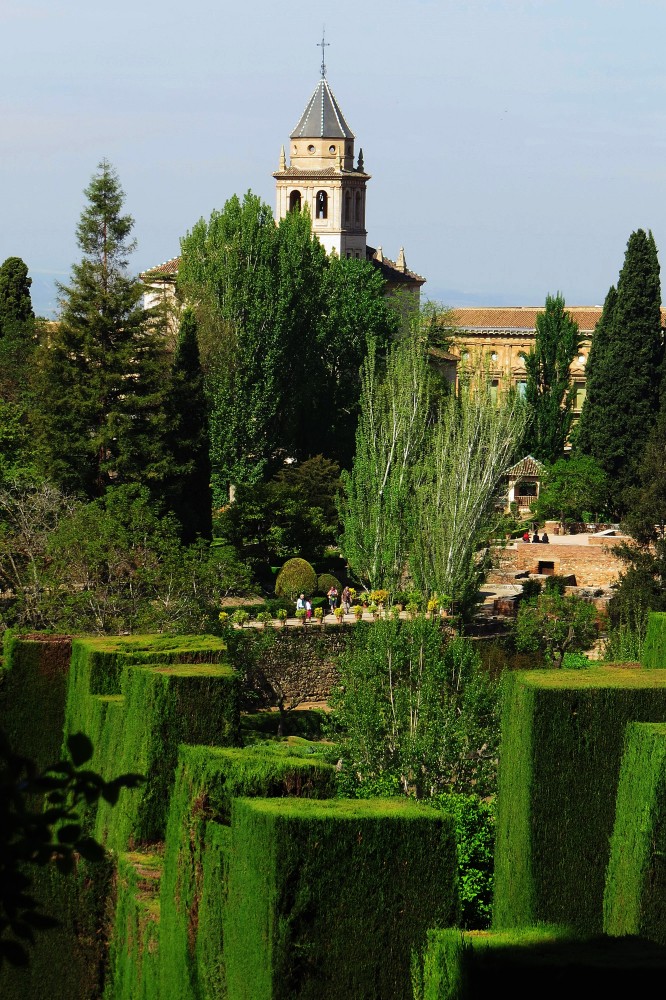 Each summer, Granada celebrates an International Festival of Music and Dance, and controversially an open-air amphitheatre, the stage enclosed with rows of pencil-thin junipers has been built to one end of the site of the Generalife. This land was probably originally open pasture for grazing and it must be remembered that the Alhambra and Generalife’s woodland is a much later introduction. As a fortress, at the time of the Nasrid dynasty the surrounding hillsides were kept defensively bare. 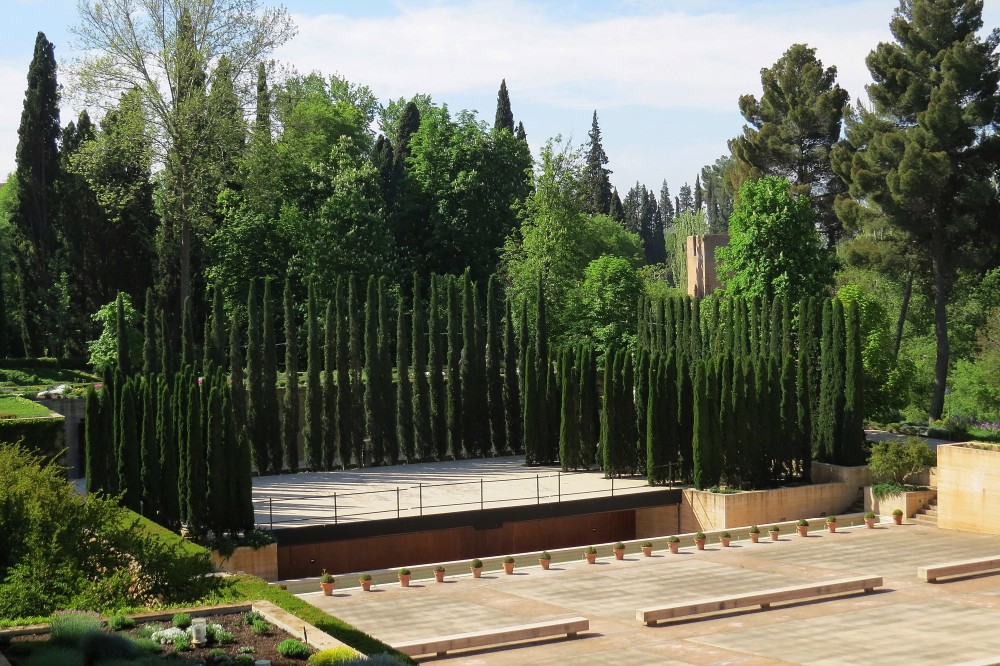 The Alhambra and Generalife are one of the world’s greatest and most remarkable series of courtyards and gardens, a place I am happy to return to time and time again. It is the jewel-like refinement and calm, the intimacy, and the tranquillity of the place that appeals, in sharp contrast to the later bombastic and extravagant Renaissance and Baroque power gardens of Italy and France.

With over two and a half million visitors a year, it is advisable to book entry in advance, particularly for the palaces, and even arriving at 8.30 in the morning will mean a two-hour wait for tickets just to visit the Generalife and the gardens. Parking and catering are virtually non-existent.