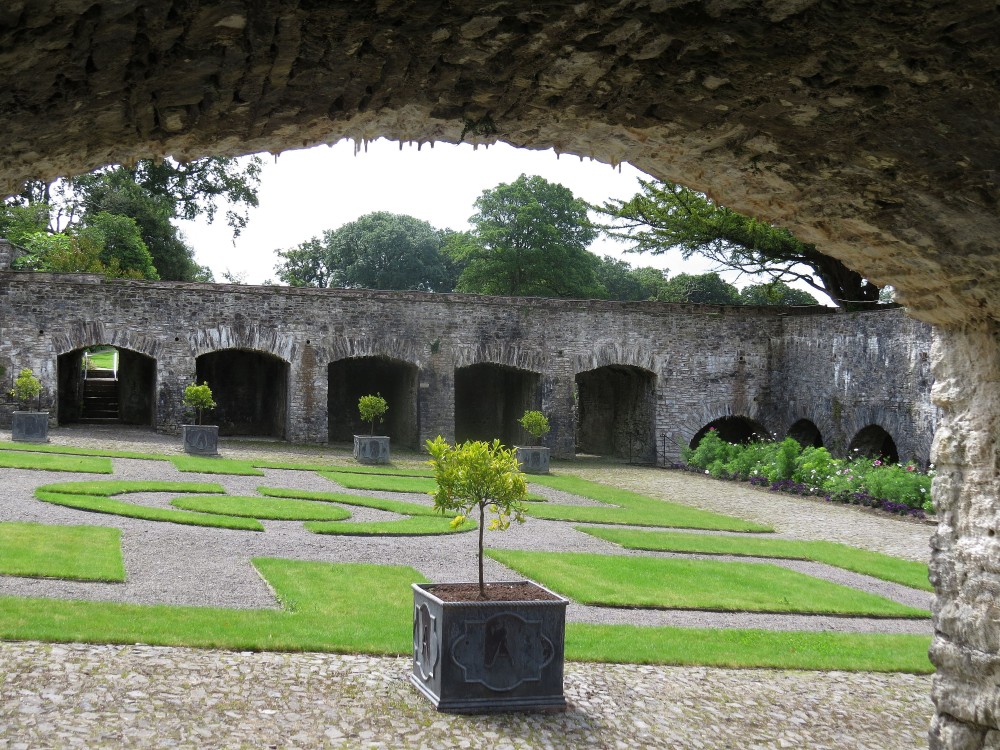 In Britain, we set the bar very high. There are literally thousands of Jekyll-inspired borders and hundreds of Capability Brown-inspired English Landscape Gardens. In other countries any one of these would be considered a national treasure, but in Britain they barely get a mention. 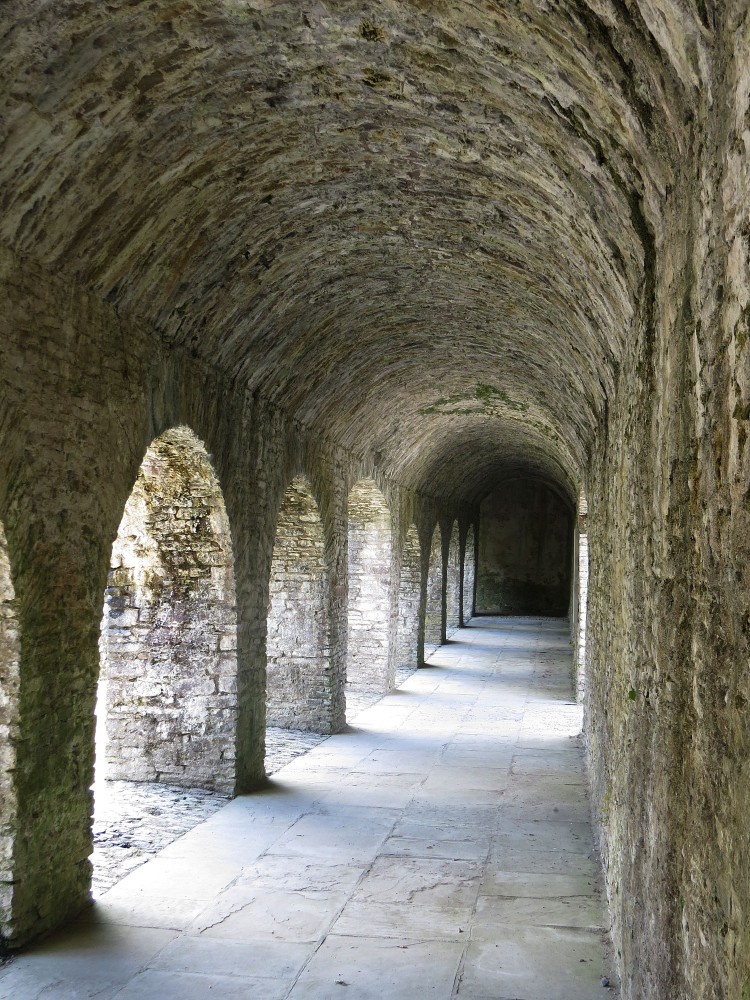 I often get asked why I haven’t reviewed a particular garden, and I have to admit to feeling jaded when I reply that I don’t think there is anything exceptional about it. But it is often the smaller gardens lacking the media firepower of a Blenheim, a Chatsworth or the National Trust that are special and don’t get the attention or visitor numbers they deserve, and none more so than Aberglasney, in Carmarthenshire. 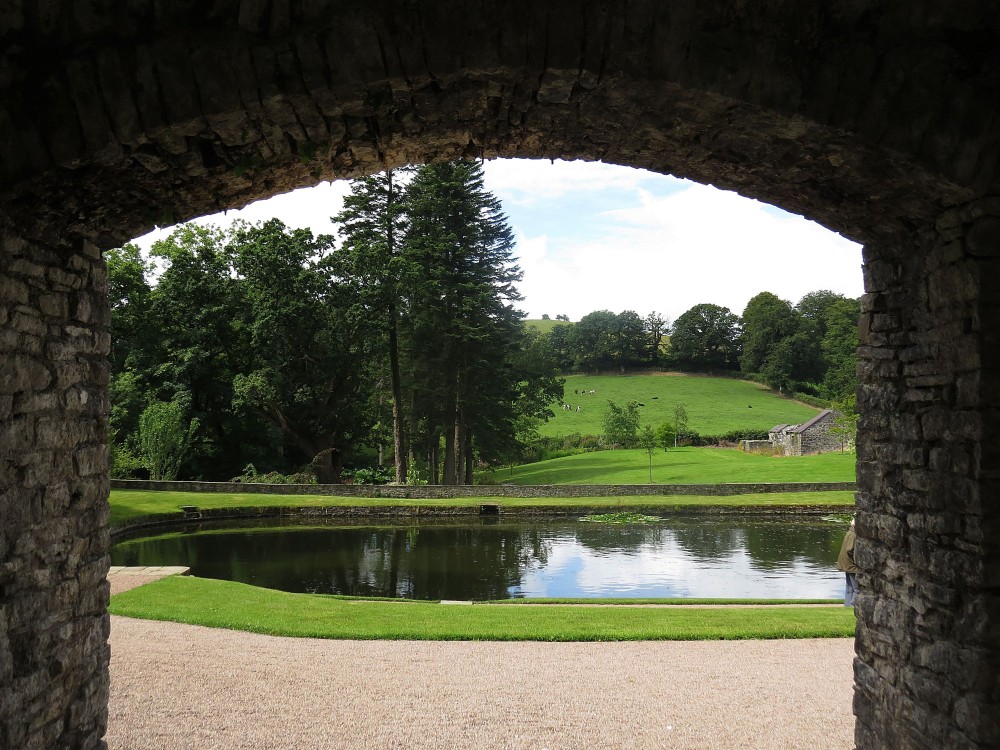 It was Aberglasney’s unique Cloister Garden that first attracted my attention, but it is the enthusiasm, determination, vision and verve of the Aberglasney Restoration Trust that makes their achievement truly remarkable, and a lesson for many larger gardens.

It was in 1995 that the small Trust was established and set about finding a benefactor to buy the house and garden, raising private donations and the long battle to get grants. By 1999, the restored garden was ready to open to the public consisting of the Cloister Garden, the Pool Garden and Upper and Lower Walled Gardens overviewed by a broad parapet walkway. Of these the Cloister Garden is the most curious. 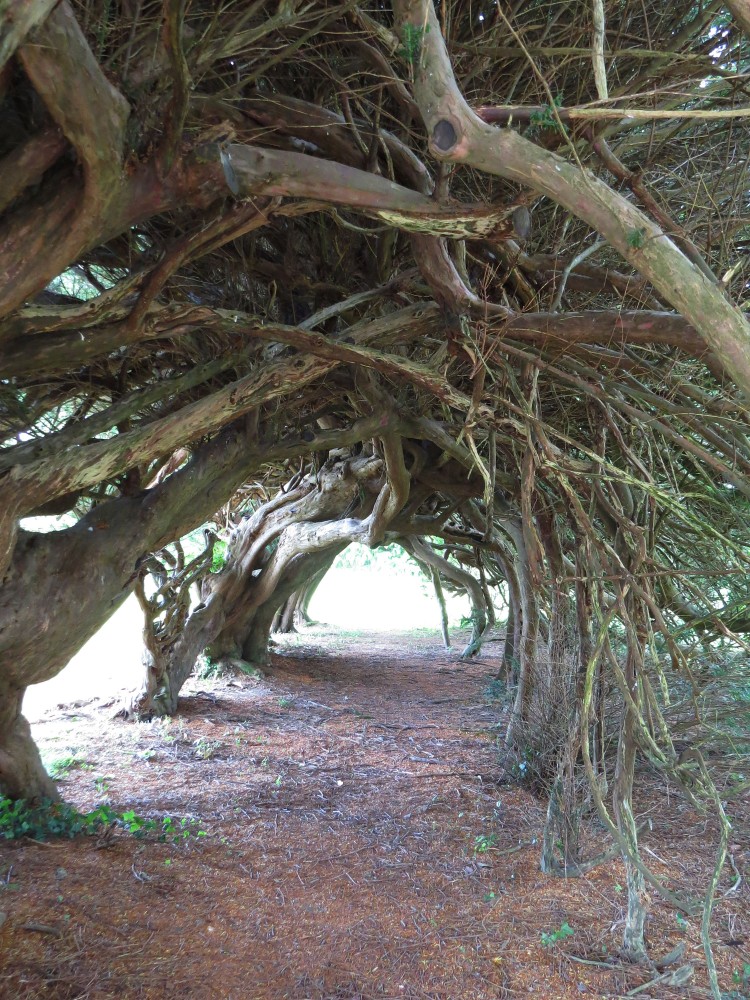 The substantial cloistered stone arcade was probably built first, and the two side ranges later, almost certainly laid out in the early decades after 1600 when the estate was bought by the wealthy and ambitious Bishop Rudd. It is the only surviving example of this type of garden in Britain. Bishop Rudd and his son Sir Rice Rudd, a favourite of James I were no country bumpkins and moved in the court circles where French and Italian influences were beginning to make themselves felt on garden design. The Rudds must have known of these, and it remains a mystery why they chose a garden with medieval antecedents rather than one in a more up-to-date style. 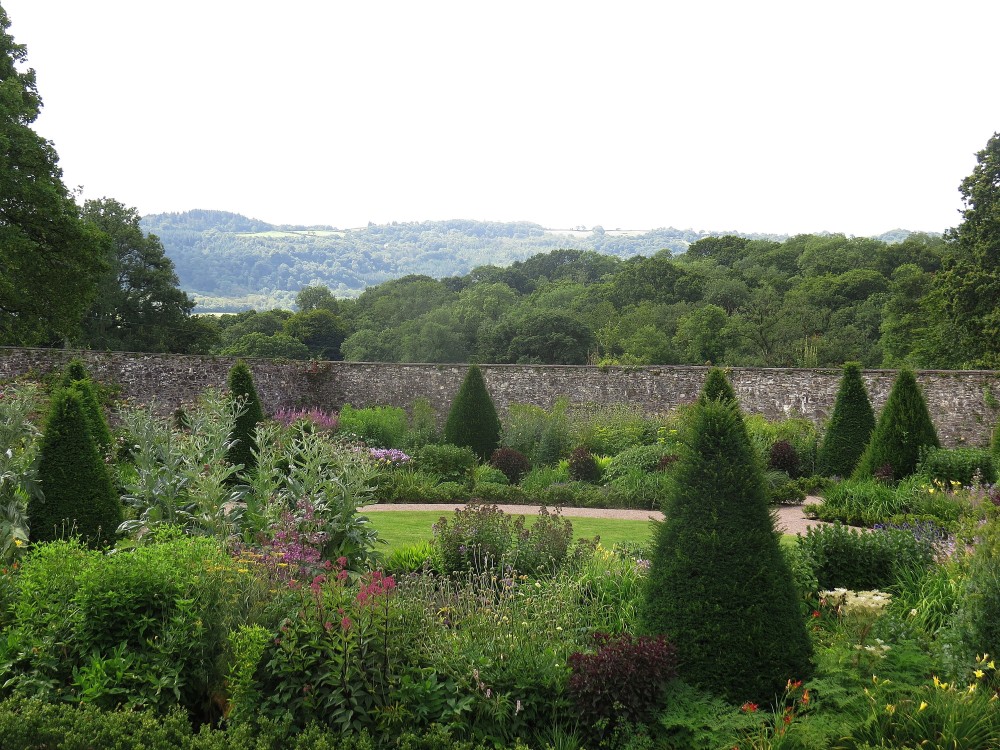 The estate changed hands many times going through troughs and peaks but again, unusually, avoided the fate of many cloister gardens that were swept away in the 18th century landscape movement. However the impressive and sculptural Yew Tunnel belongs to this period, although it will take many more years before the rejuvenation programme is completed. 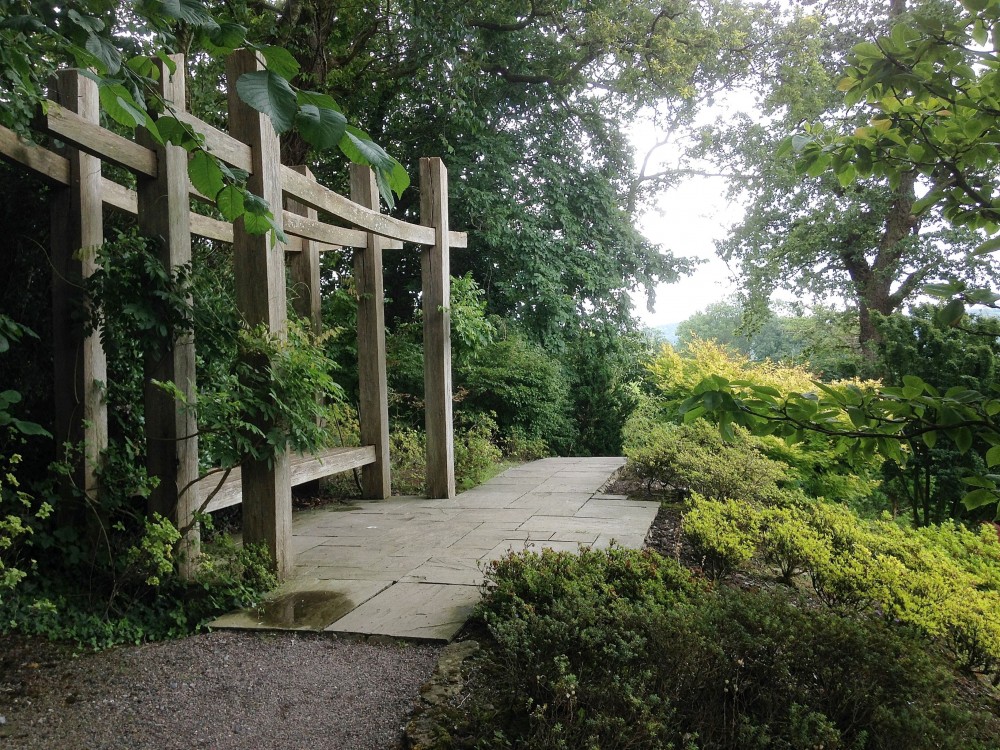 In the garden restoration the Cloister Courtyard was laid out with an intricate grass parterre and the rectangular Jacobean stew pond was reinstated as a Pool Garden, fed by rills at the corners and along the sides. Providing produce and flowers for the restaurant, the Lower Walled Garden has a typical quadrant plan with the planted rows set on the diagonal making a dynamic, attractive and interesting layout, and the newly designed Upper Walled Garden is in the form of an oval Celtic cross. The structure is of tall yew cones with large fine effusively planted perennial beds in the Jekyll tradition. 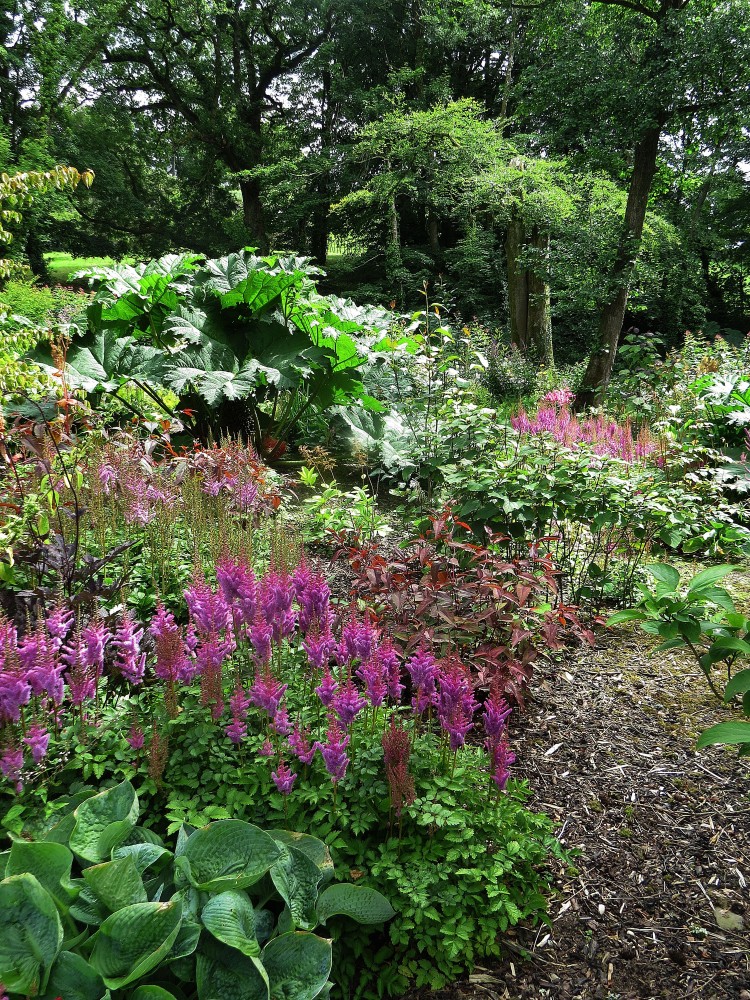 Over successive years since the garden opened to the public new gardens have been added to give Aberglasney variety and year-round interest. Not only does it now have an Asiatic Garden, traditional roses, an Alpinum, a Stream Garden, a shade garden planted in the dappled light of a ravine (Bishop Rudd’s Walk) but also a 21st century Sunken Garden. This is planted in fiery reds and oranges with a fine modern water sculpture by William Pye. However the most remarkable new garden feature is the Ninfarium. 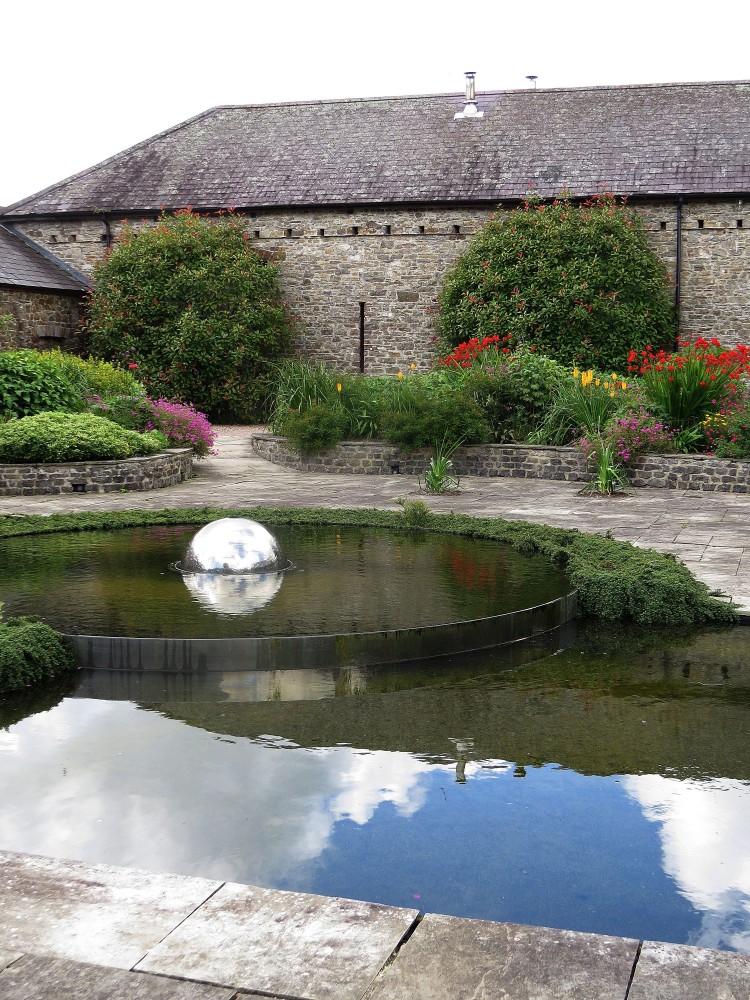 Taking its name from the garden created around the ruined village of Ninfa south-west of Rome, the Ninfarium is a collection of warm temperate and sub-tropical plants below a large glazed atrium. Set in the central courtyard and ruins of the surrounding rooms of the Queen Anne house it is a curious and distinctive feature of the garden. 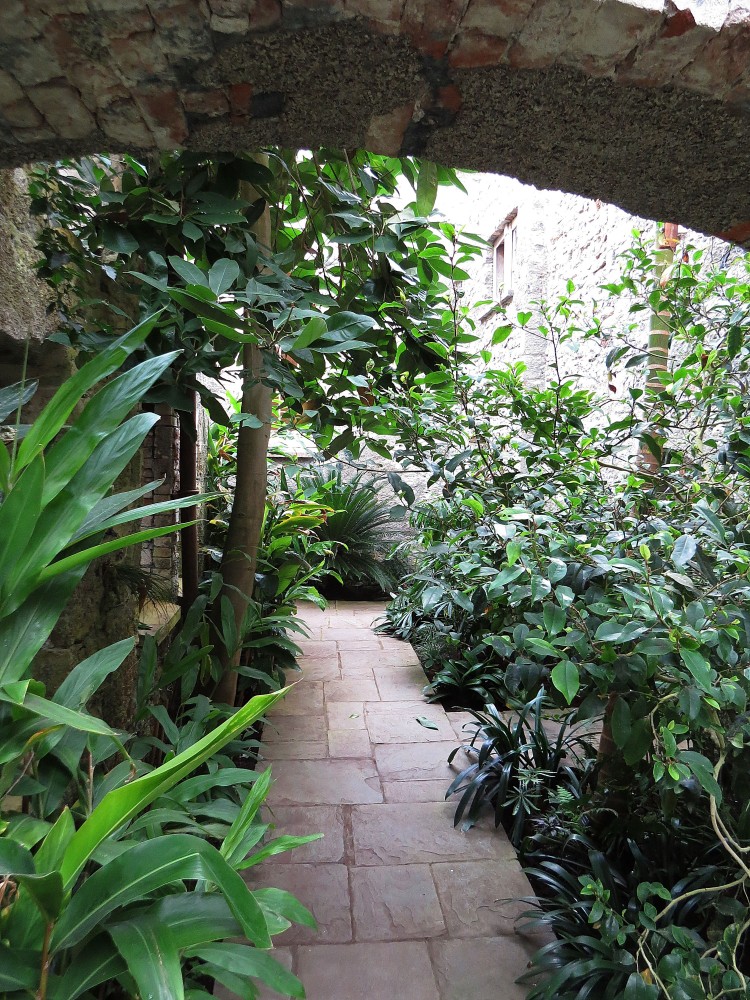 The gardens at Aberglasney were a great surprise to me. The various parts of the garden fit together as a whole and the unique features are delightful, whilst the planting is a joy to both the plantsman and the designer. The chance to overview the gardens from the parapet walkway, the sloping site and numerous paths through the plantings make this an interesting and quite intimate garden. There are undoubtedly greater gardens in Wales with breath-taking features such as Powis Castle and Bodnant but to my mind these gardens also have their flaws, which Aberglasney does not.

I know I am making a bold claim to say that Aberglasney is the best garden in Wales, but as a young and developing garden it can only get better.