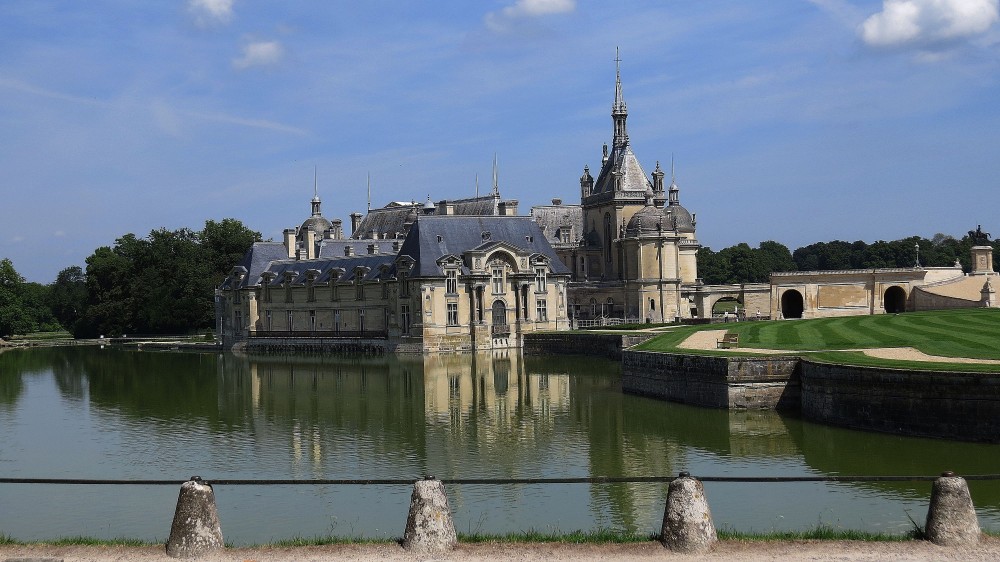 The highlight of my trip to Paris was always going to be a visit to Chantilly. I had visited Versailles, Fontainbleau, Giverny and so on before but never Chantilly. From the aerial photographs it looked breath-taking but that always worries me. On the ground a garden often doesn’t live up to the expectations raised by the aerial shots.

Getting there wasn’t straightforward. Mistakenly, I had taken the slow train from Gare du Nord instead of the fast train and the infrequency of buses at the station when I finally arrived led to a pleasant forty minute walk through the town and park to the Chateau. Fortunately for late July it was unusually cool. 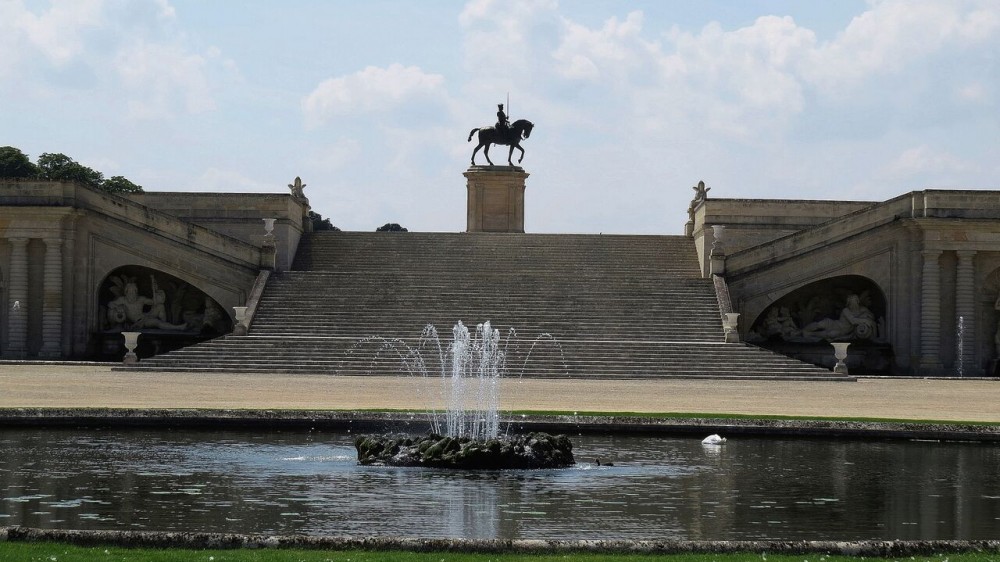 The first impression was astonishing. The Chateau (or rather the diminutive 16th century Petit Chateau and the 19th century Grand Chateau) was set in a large rectangular lake that Andre Le Notre had created from the moat in the mid 17th century. 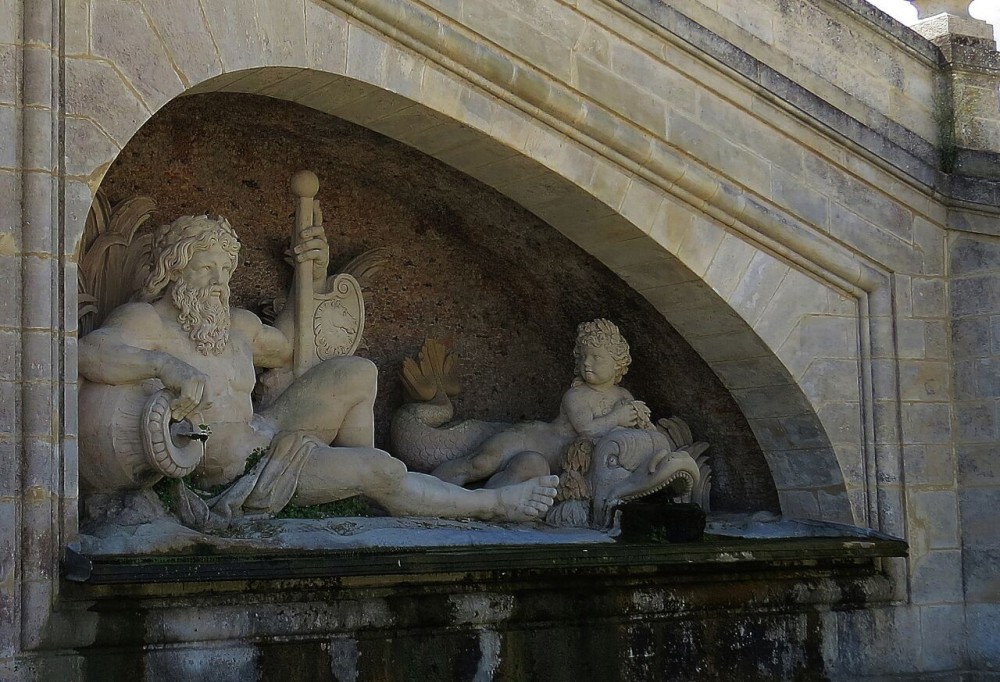 The main approach to the Chateau through the enormous entrance courtyard gave no indication of what lay beyond. Le Notre’s genius shines through at Chantilly, and faced with an asymmetrical moated castle he centred his great garden on an enormous staircase that leads down from the courtyard to a circular pool and the water parterre beyond. To each side of the stair lay large recesses with fine statues of reclining river gods. The scale of the water parterre was much larger than I imagined, but as I expected the low angle views didn’t do it justice and I needed to see it from the first floor salons of the Grand Chateau. 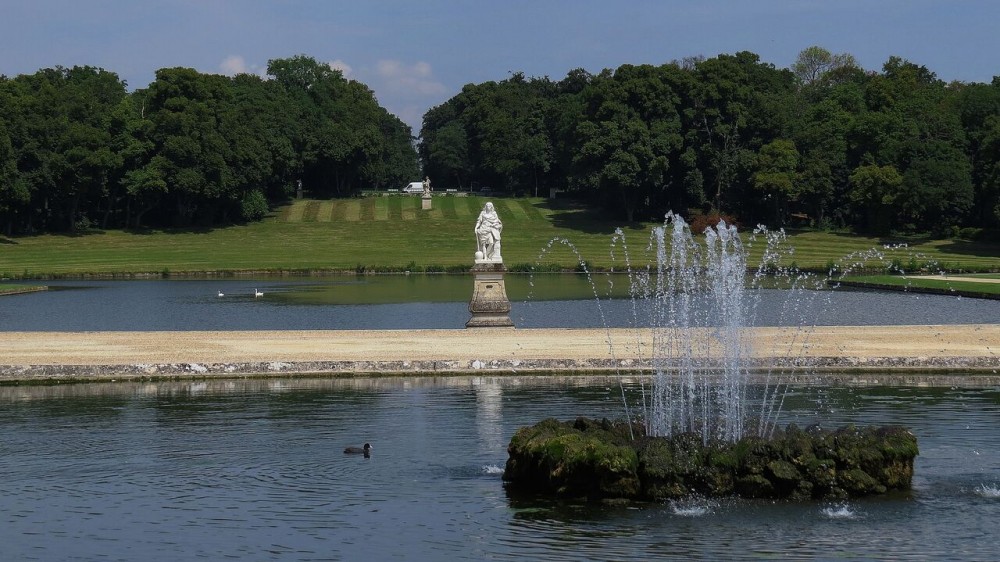 Overview of the Water Parterre

The Grand Chateau, burnt down in the French Revolution and was rebuilt in the late 19th century by the Duc d’Aumale as a fairy-tale confection designed to house La Musee Conde, one of France’s finest picture collections, dimly lit and poorly displayed behind drawn blinds. When I lifted the corner of one of the blinds to try to get an elevated view of Andre Le Notre’s great water mirrors I was sharply rebuked by one of the custodians. In fact, both custodians and restaurant staff seemed particularly officious and unfriendly at Chantilly even by French standards. 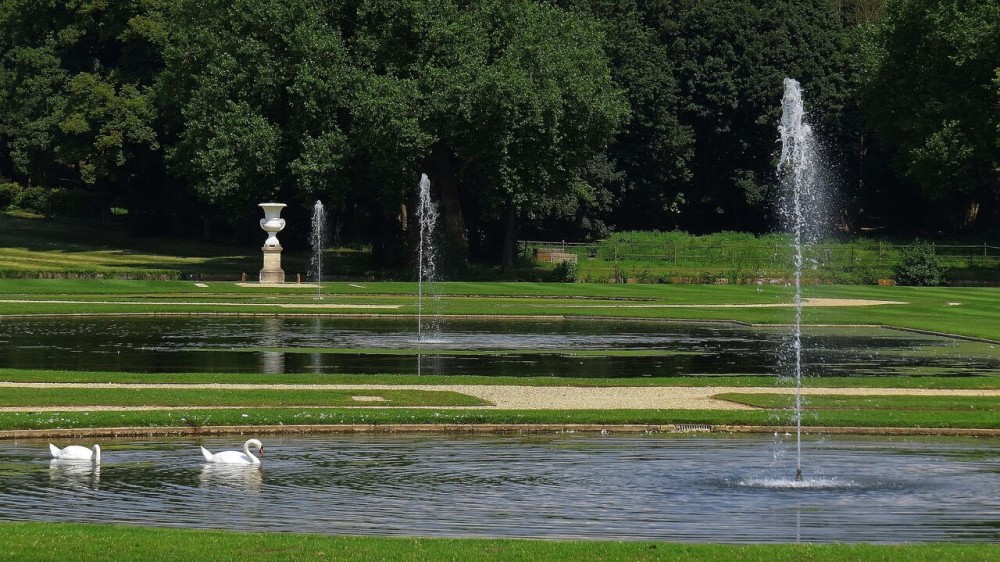 Le Notre’s design for Chantilly was commissioned by Louis de Bourbon, better known as the Grand Conde. He spent much time at Chantilly following his fall from the favour of his royal cousin Louis XIV. The great water parterre was designed to be viewed from the state rooms of the 17th century chateau whereas the inward-looking 19th century art gallery ignores this fabulous feature. They would have shimmered with silver light in the breeze, reflected the clouds and sky in the still air, become the colour of mercury with approaching storms and  glowed pink and orange in the setting sun.  It was understandably one of Le Notre’s favourite creations. 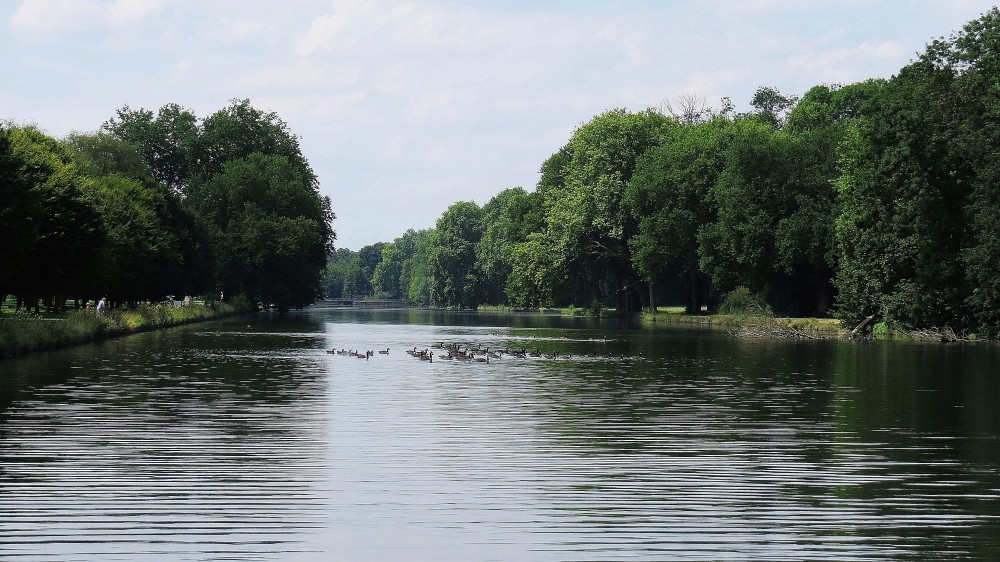 Along the main axis of the stair lies a canal which bisects the parterre and leads to a semi-circular bay in the intersecting vast Grand Canal. On the opposite bank Le Notre created an amphitheatre flanked by trees. The parterre and opposite bank have fine 17th century statuary and urns that lead the eye across the parterre, canal and up the hill beyond. At Chantilly, unlike many of Le Notre’s other gardens (but particularly Versailles) there was no shortage of water, but the group of five pools in each of the four quadrants of the water parterre had fairly modest fountains that were only used part of the time. 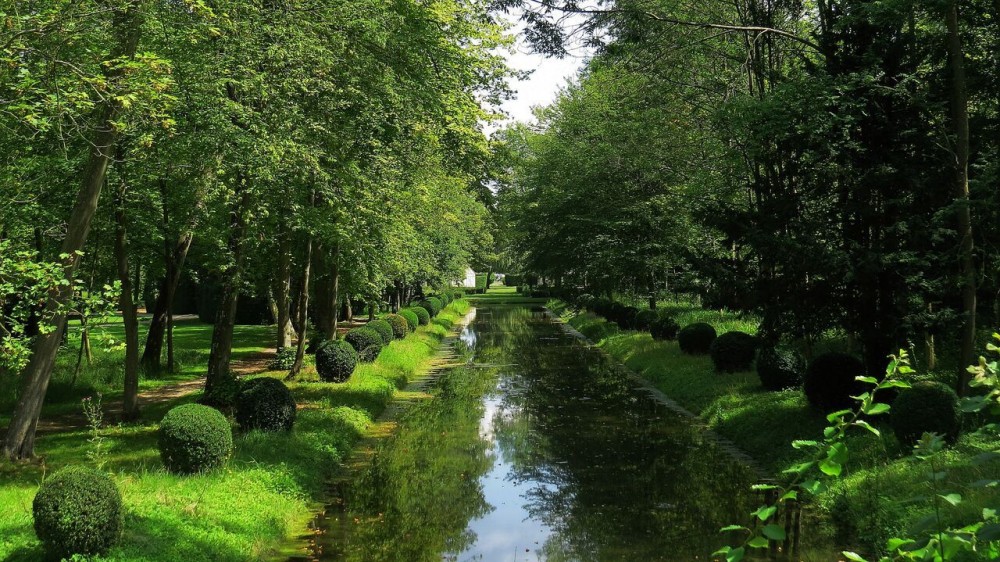 As a consequence of France’s turbulent history much of Le Notre’s garden at Chantilly had been lost and overlaid by an 18th century ‘Anglo-Chinese’ garden and a picturesque 19th century Jardin Anglais which are pleasant enough but largely unmemorable. More importantly, set some way from the Chateau and parterre are the cottages of Le Hameau, the authentic prototype for Marie-Antoinette’s fanciful and rustic hamlet at Versailles.

In recent times, the Chateau and estate has had a troubled history, Bequeathed by the Duc d’Aumale to the Institute de France on his death in 1897, the great art collection and entire estate was put on the World Monument Watch List in 2002 and rescued by a 70 million euro restoration, much raised from private donations. 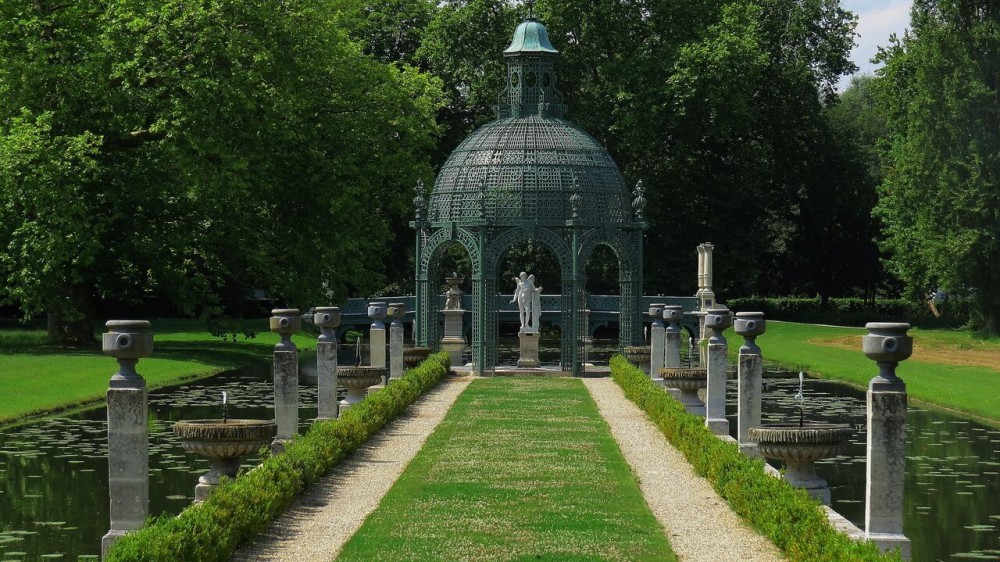 Chantilly is in many ways a disappointing garden. The water parterre was designed to be overviewed from the state rooms and this is no longer easily accessible, the scale of the water basins seems over-large and the later gardens are largely lacklustre. I’m pleased I saw it, but I won’t be going back.