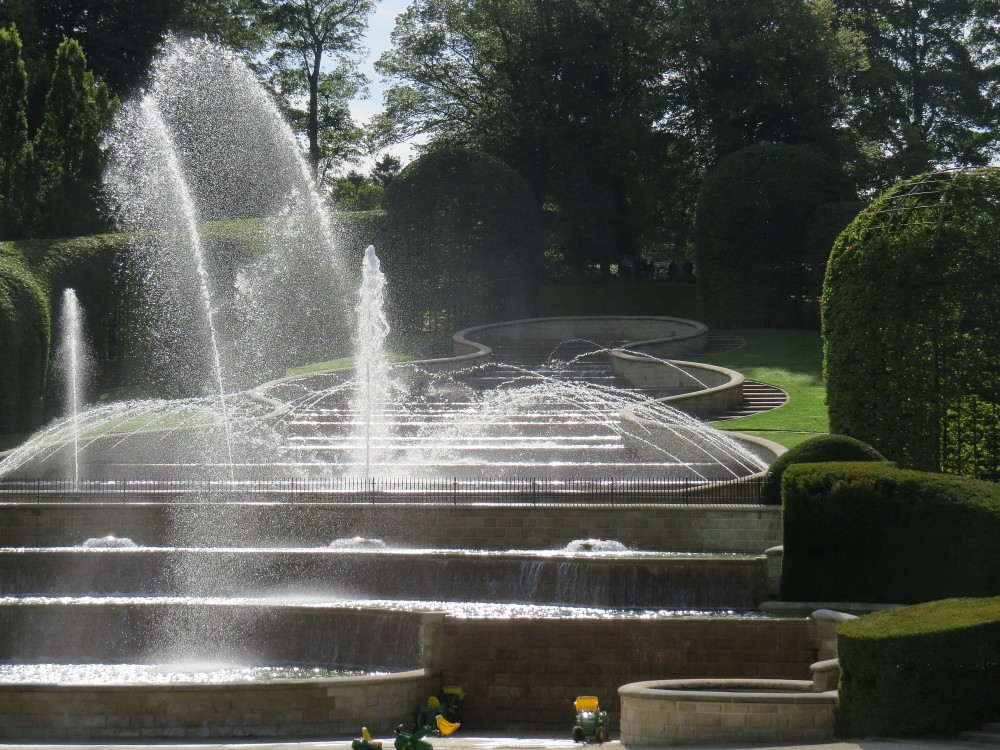 The Alnwick Garden has always sharply divided opinion. On one day it can be a delightfully tranquil place for the garden visitor (- my weekday visit in late September), yet on another be something akin to a theme park with hordes of excitable children, endless queuing and the pervasive smell of fish and chips by the main garden entrance (- an August visit). Jane, the 12th Duchess of Northumberland who has been the driving force behind the project describes it as ‘a contemporary pleasure garden’ and this is exactly what it is, neither ‘garden’ in the conventional sense nor theme park. 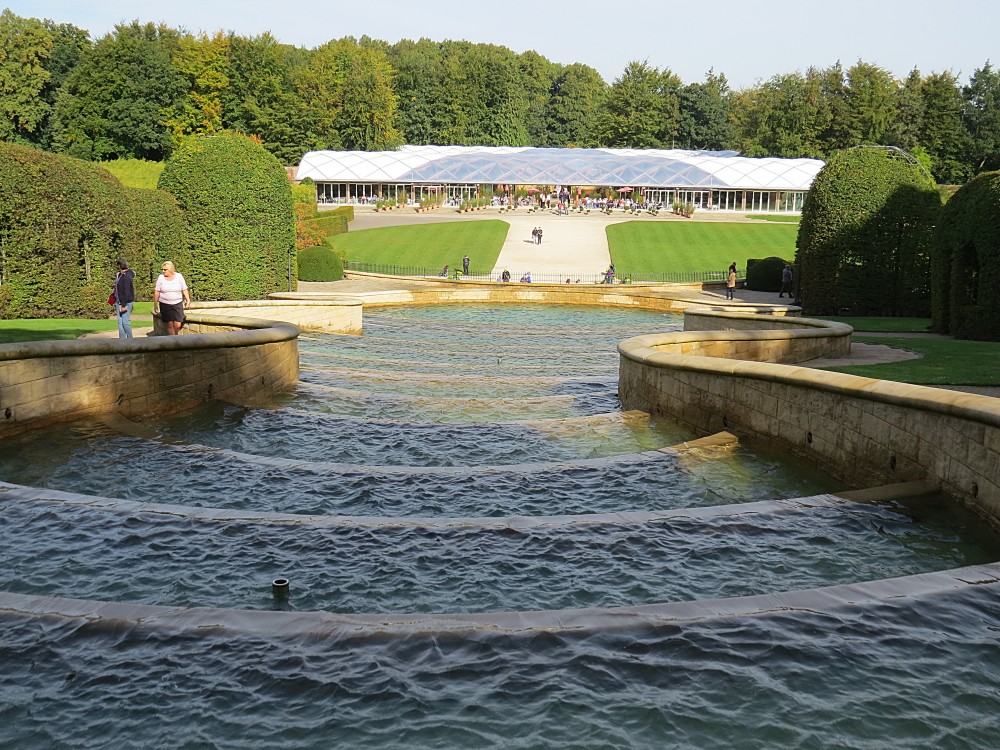 Looking down the Grand Cascade to the Pavilion

It is the revival of an almost forgotten English tradition. Like the extravagant and now lost 18th century pleasure gardens such as at Vauxhall and Ranelagh, Alnwick has a great sense of fun, theatre and spectacle, a place where pleasure, entertainment and enjoyment are paramount.

Of course, tastes change – the great 18th century London gardens were places to see and be seen, to promenade in one’s finery taking delight in nature and birdsong away from the dirt and grime of the city, or to have dalliances in the shrubberies. In addition to al fresco dining in the ‘supper boxes’ it was popular to take that great 18th century tradition, the public breakfast. Epic candlelight theatrical pageants, dances, first performances of both Handel and Mozart, tight rope walkers, and balloon ascents were some of the public entertainments on offer for a small entrance charge. 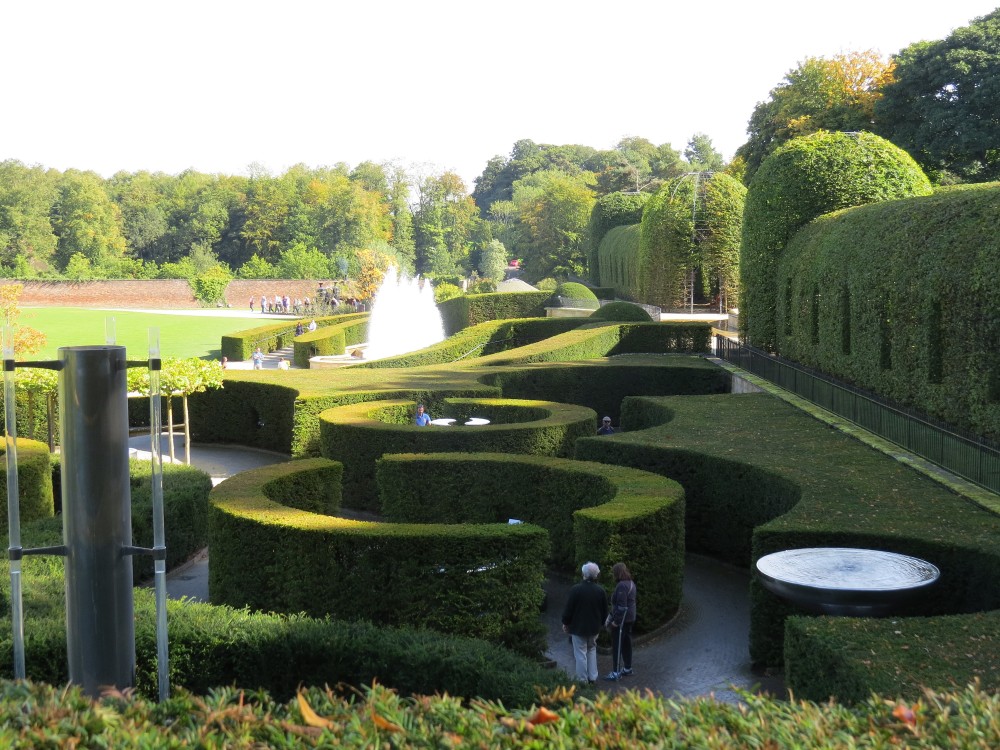 Alnwick’s main entertainment is the spectacular half-hourly water displays of the Grand Cascade. On a steep hillside, surrounded by serpentine hornbeam hedges, and with innovative lighting and audio effects for evening performances it is deliberately sited opposite the Pavilion, the main entrance and vast cafe restaurant with its extensive and sheltered terraces. The 120 computer-controlled water jets propel water across the Cascade in delightful and playful bursts of energy. 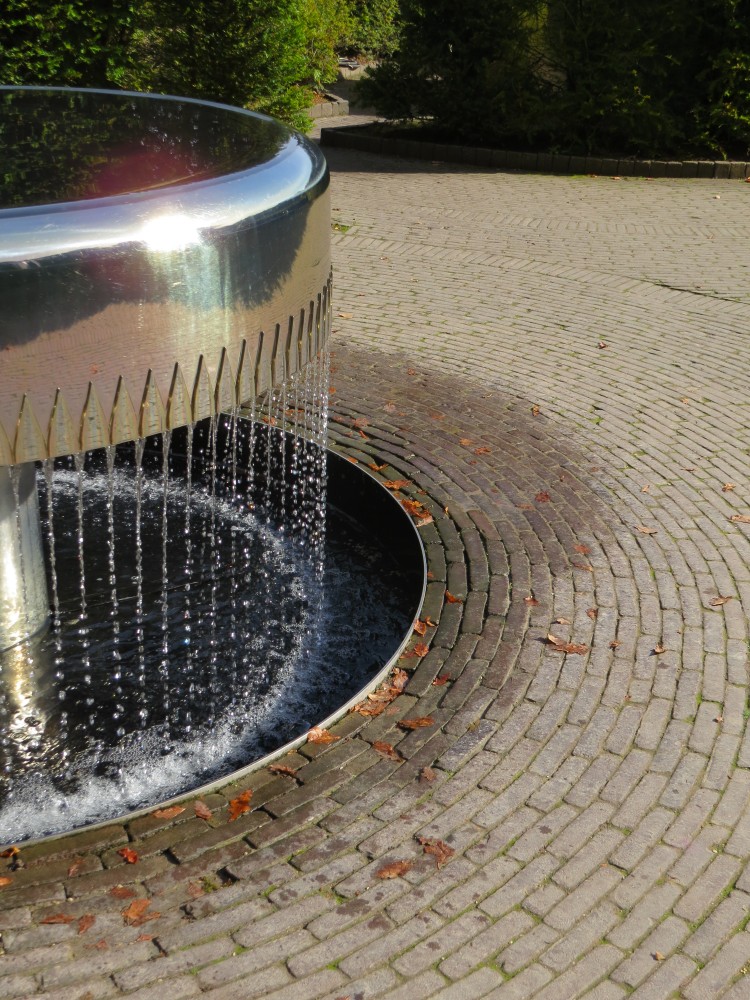 In addition to special seasonal events, The Alnwick Garden has a full programme of arts, education and family events. 55,000 visitors a year take part in activities and workshops ranging from tea dances for ‘Elderberries’ to the ‘Roots and Shoots’ project – teaching disadvantaged children the rudiments of gardening. Like Vauxhall in its heyday, this new garden is wildly popular drawing 800,000 visitors a year, something that has revitalised the local economy. 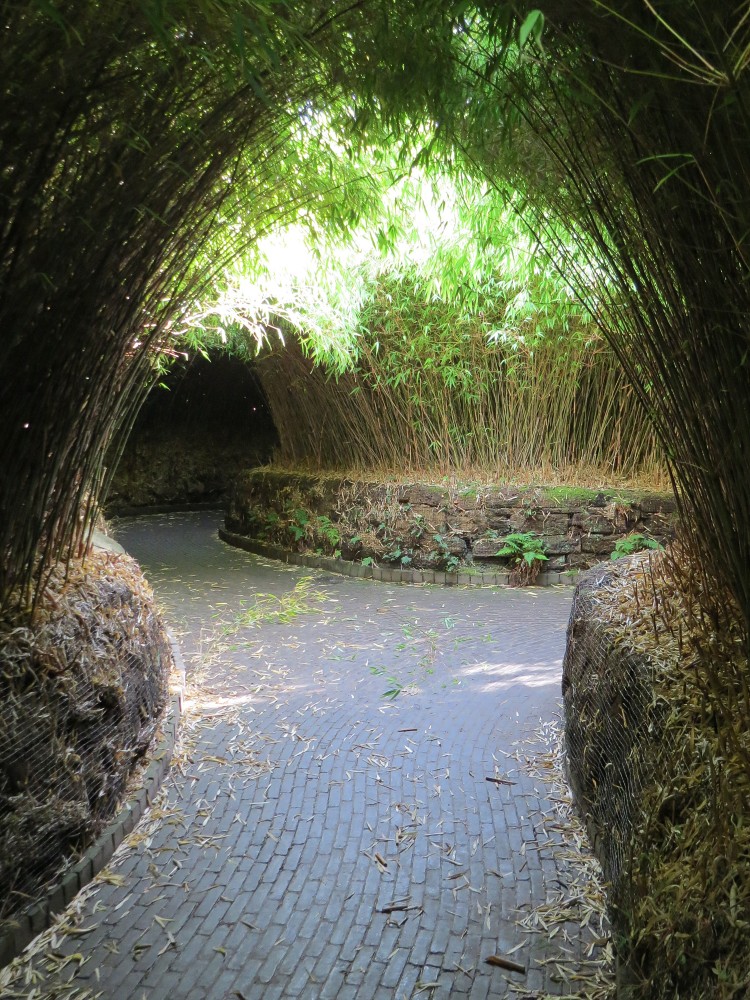 Whereas Vauxhall amused its visitors with such exotic garden features as ‘Turkish’ tents, ‘Chinese’ temples and bridges, grottos, pools and fountains set along formal walks, Alnwick’s success comes from the extensive sculptural use of hornbeam, beech and yew enclosing a series of garden rooms. Of these, the Serpent Garden comes closest to the spirit of Vauxhall, with its seven exceptionally stylish stainless steel water features designed by William Pye sited in intimate spaces enclosed by yew hedging and stepped low level beech. These features show the captivating, surprising and imaginative ways water can be used as a playful art form. 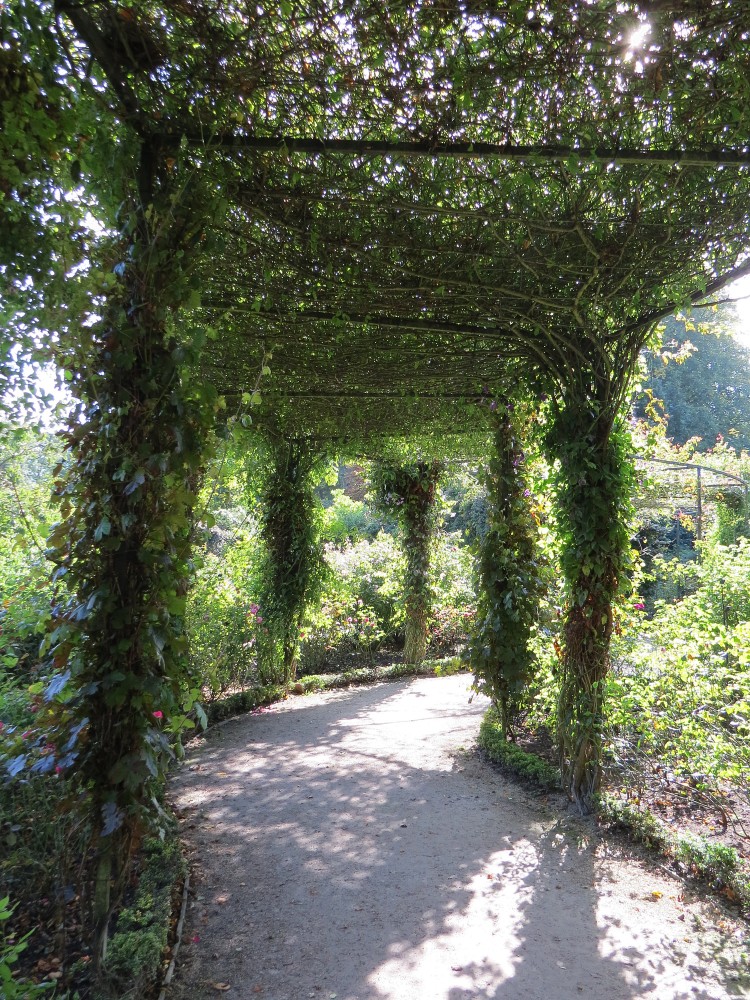 Alnwick may lack Vauxhall’s dubious shrubbery, but its Bamboo Labyrinth is an exciting and intriguing feature. The curved shaded tunnels of evergreen Fargesia rufa set on raised banks of compressed peat have a slightly sinister feel, the bamboo stems being as impenetrable as prison bars.

Probably the garden’s most famous and unique attraction is the Poison Garden, growing both common everyday plants and herbs that can cause nausea, stomach cramps and death, and narcotics such as cannabis and coca that need a licence from the Home Office. Entrance is obviously strictly controlled with conducted tours by story-tellers but learning about the horrible symptoms of a painful lingering death is something children of all ages enjoy. 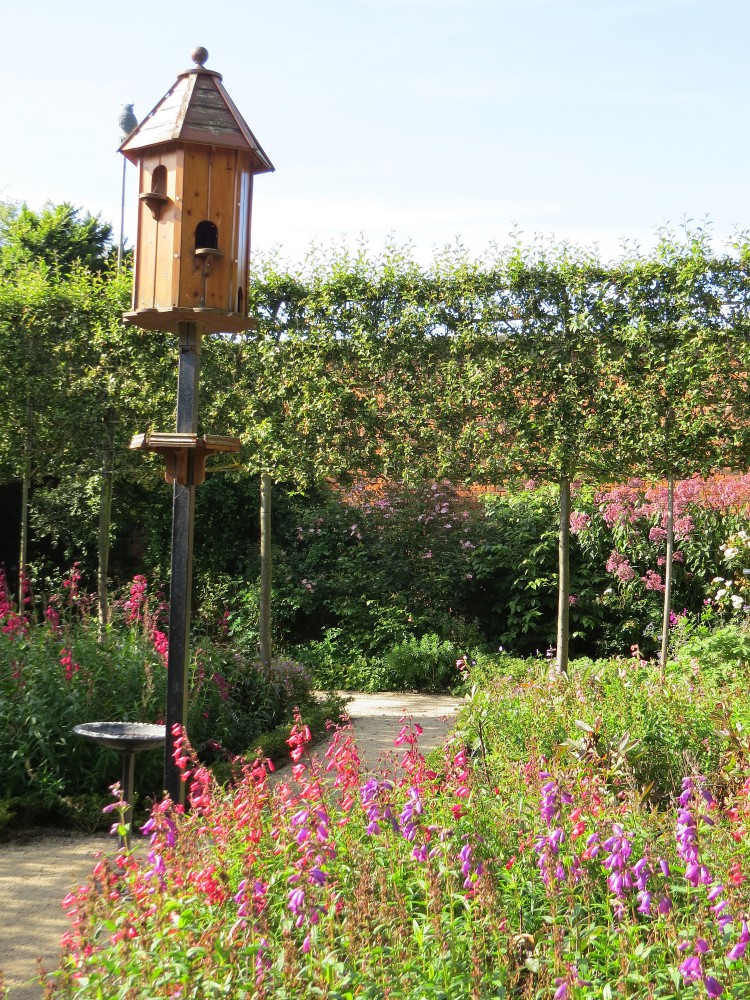 There are the more traditional features that gardeners can enjoy at Alnwick. The large and heavily-scented Rose Garden is planted with David Austin shrubs roses and defined with pergolas covered with climbing roses, honeysuckle and clematis; whilst the walled Ornamental Garden (originally the Vegetable Garden) is divided into a series of intimate rooms framed with espalier crab apples (Malus x robusta ‘Red Sentinel’) and clipped hedges enlivened with raised pond, rills and mirror pools.

It is inevitable with a new garden the size of Alnwick that some features work better than others. The Cherry Orchard planted with over 300 Great White Cherries (Prunus Yai-haku), and underplanted with red tulips is an amazing and impressive sight for three weeks in April but it lacks form and structure, and the hillside walks in the summer months are disappointing until the fiery red tints of the autumn foliage emerge.

Five further gardens are planned, including a garden for the senses, and a spiral garden. 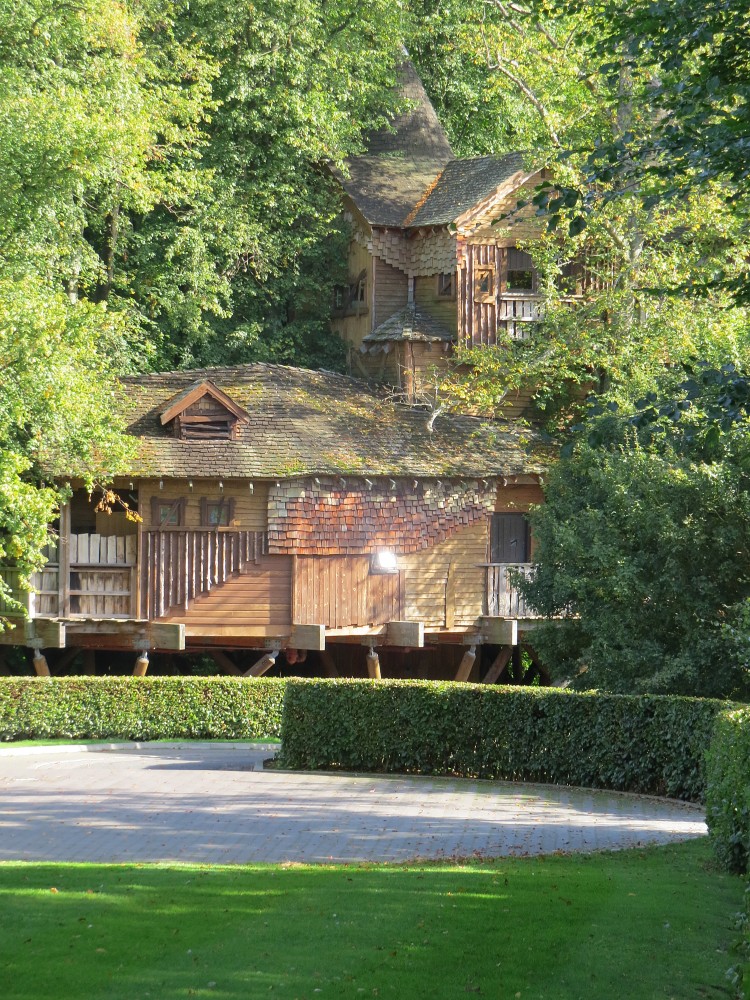 Surprisingly, the enormous and very stylish Treehouse also disappoints. I expected it to be a huge draw for children with large areas set aside for innovative play supervised by animators, but the restaurant, coffee bar, catering and private function room occupy most of the space. 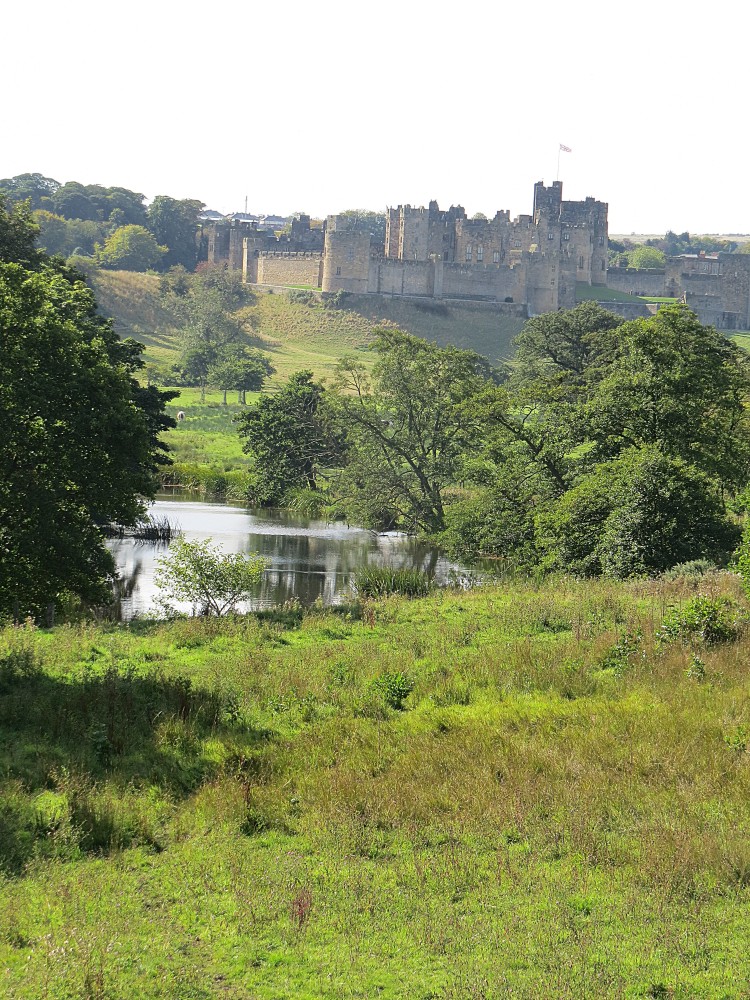 View over the River Aln to Alnwick Castle

Alnwick is a brave, very expensive and controversial new garden that has made many enemies. The Heritage lobby were appalled at the cavalier approach to a Capability Brown landscape (though the stunning views over the River Aln to Alnwick Castle are iconic), and the horticultural lobby were dismissive of the garden designery concept, vast areas of hedging and ground cover, and blocks of non-traditional planting with not a Jeykll inspired border in sight.

Alnwick nails its colours firmly and confidently to the mast and I just love it, but I’ll make sure I carefully choose my days for future visits……..