When I first saw the Howardian Hills, that area of outstanding natural beauty with its distant views of the blue horizon and big skies I thought this was landscape perfection. Not for me the scraggy mountains of the Lake District or the comforting folds of Hertfordshire or Essex. This was a real landscape on an heroic scale. 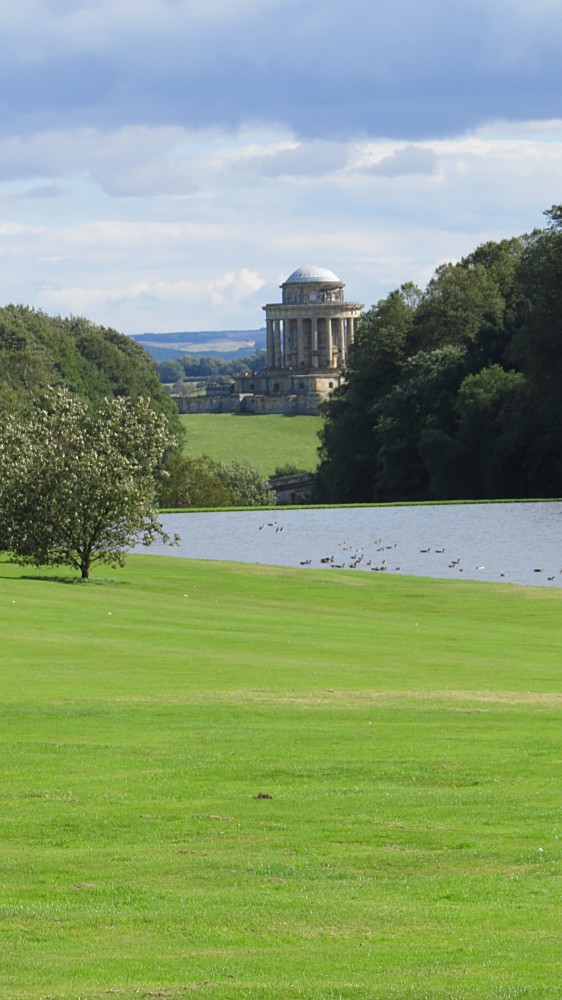 Henderskelfe Castle, built on a commanding ridge overlooking that spectacular panorama burnt down in 1693, but only a year previously Charles Howard, the 3rd Earl of Carlisle had at the age of 23 inherited the castle, the title and great estates. He asked one of the leading architects of the age, Talman, to produce designs for a new mansion to be called Castle Howard, but it was John Vanbrugh a flashy theatre designer and Carlisle’s fellow member of the racy Kit-Cat Club, who unencumbered by an architectural education, eventually got the job. 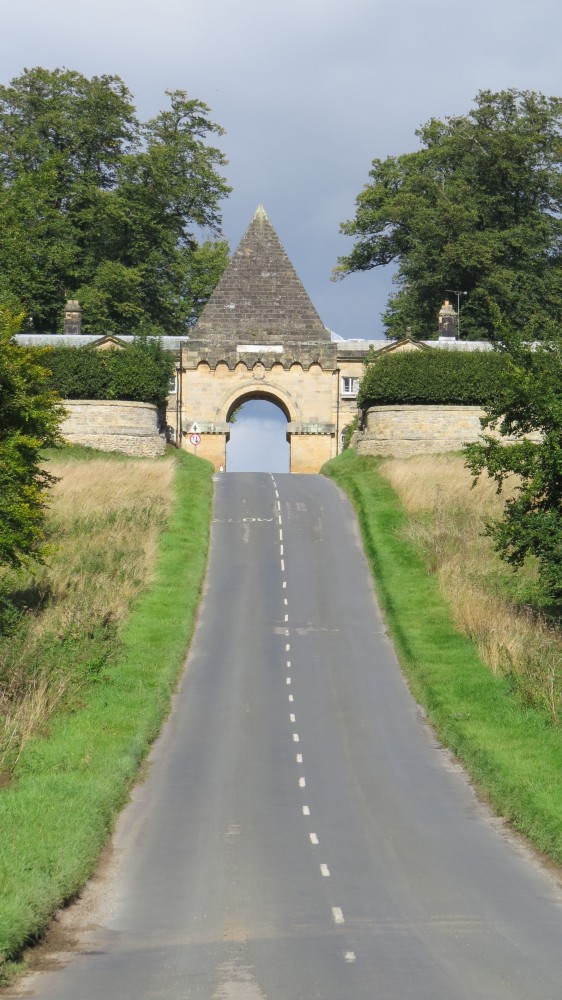 The Kit-Cat Club started as a cheap eating-house for poor artists and writers. Such was its popularity that bastard royal dukes, aristocrats, powerful politicians, scandalous playwrights and witty incisive writers of a progressive and Whig persuasion met for the ceremonial consumption of that great English delicacy, the mutton pie. The passionate concern of the Club was to create a distinctive political and cultural English identity, throwing off the prevailing French cultural dominance. It was into this hotbed that the young Carlisle was cast. 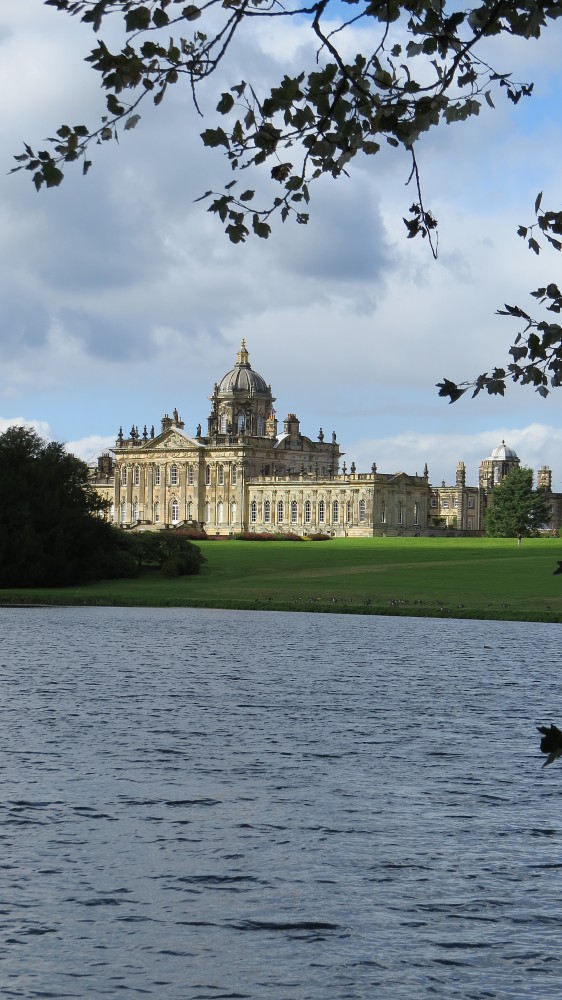 Perhaps intimidated by the power, intelligence and wit of members of the Kit-Cat Club the wealthy Carlisle resolved to build a spectacular status symbol, and who better to stage-manage it than Vanbrugh? But I think the evidence shows that Carlisle proved to be the directing mind behind both the house and the garden. Interestingly, when both Vanbrugh and Henry Wise, the gardener, came to lay out subsequent gardens they reverted to pre-Castle Howard concepts. 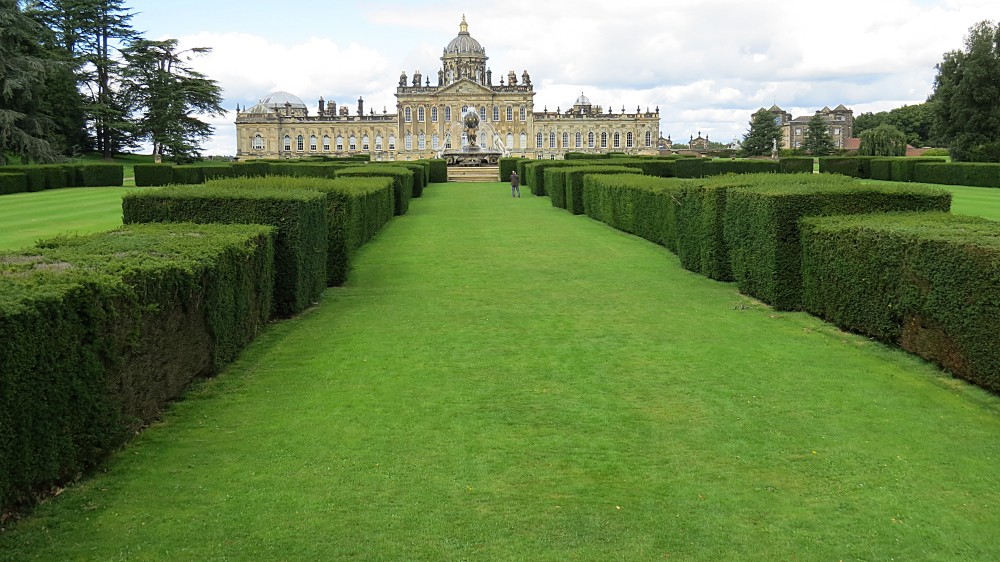 By 1710 Vanbrugh had designed a vast parterre at Castle Howard in the French style, only to be rejected by Carlisle. It was subsequently laid out with a formal arrangement of grass, statues, obelisks and urns, but without compartments. The magnificent and dramatic Atlas Fountain to be seen today was installed by William Nesfield in the 1850s as the centrepiece of a fussy Victorian South Parterre. A more appropriate formal arrangement of castellated yew hedges and lawns replaced it in the early 20th century, but despite a proper sense of scale and height, I find it a bit disappointing – like a corridor between interesting rooms. 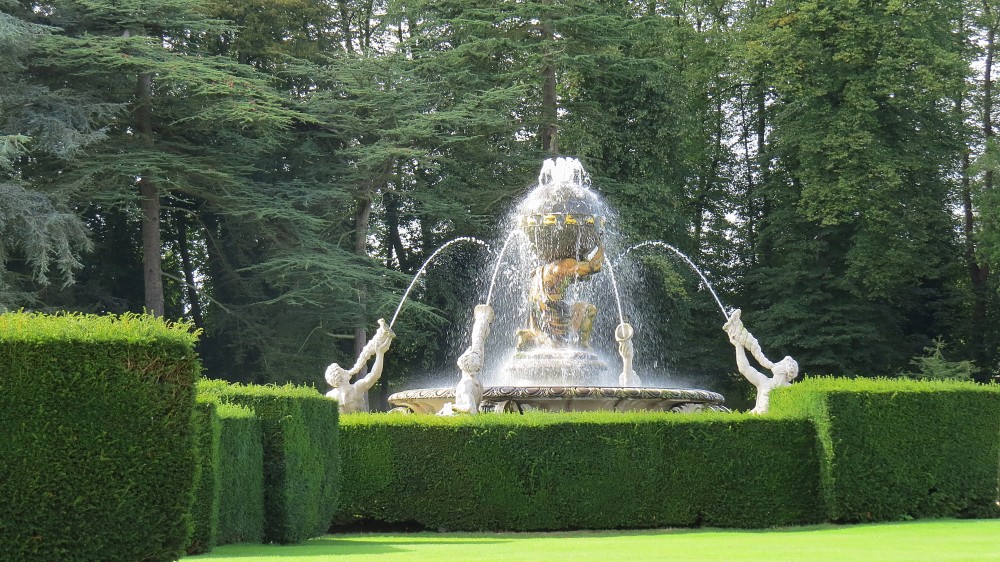 Vanbrugh and Wise also came to grief over Ray Wood. The formal French fashion of the time was for straight evenly-planted rides radiating out like a star from the centre of a wood. Carlisle’s fellow Kit-Cat member, Joseph Addison had in his publication The Spectator argued for the design of gardens ‘to imitate the rough careless strokes of Nature’. 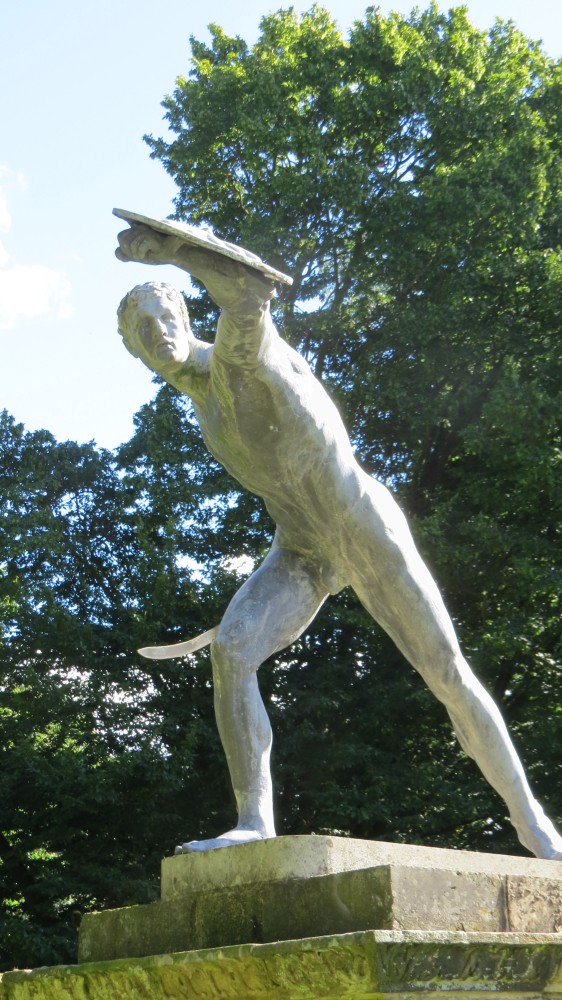 Carlisle took this on board, creating serpentine paths through an ancient woodland, but with carefully screened urns, statues and fountains intended to delight and surprise the visitor. This was perhaps my greatest disappointment at Castle Howard. The wood had been chopped down in the 1940s, and although replanted in the 1990s had an understorey of shade-tolerant non-native shrubs, mostly rhododendrons. I would have preferred an historical re-creation. 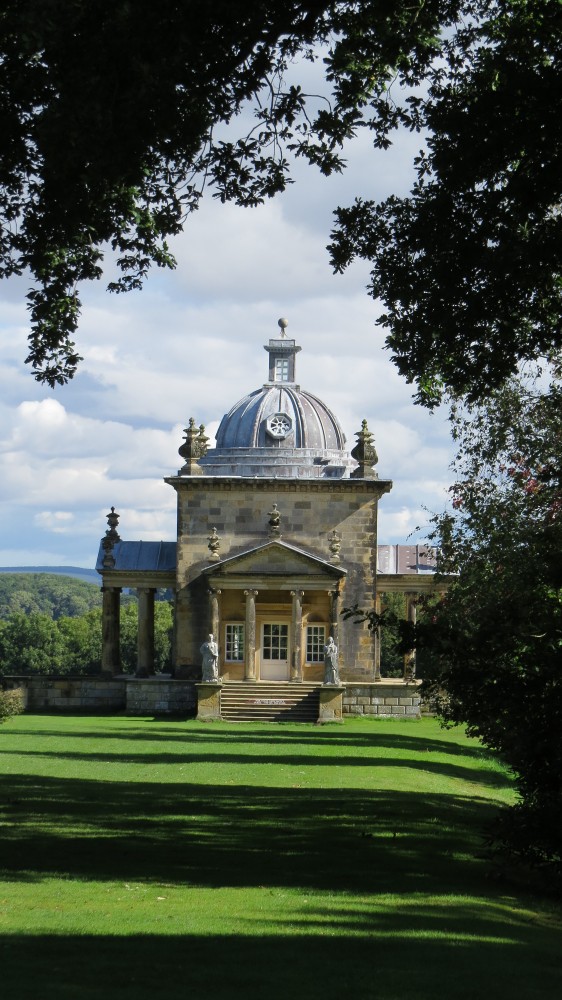 The Temple of the Four Winds and Temple Terrace

Adjacent to Ray Wood had been the village of Henderskelfe which was socially cleansed from the landscape, but the hummocky and slightly askew Temple Terrace is the line of the former main street. For me, this is the site of Castle Howard’s greatest and most unique garden feature, the amazing collection of 18th century lead statues commissioned by Carlisle’s son, the 4th Earl. Copies were made in London of great Italian Renaissance masterpieces, the star of the show undoubtedly being the Borghese Gladiator. Much restoration and re-casting has been carried out in recent years and the results are superb. 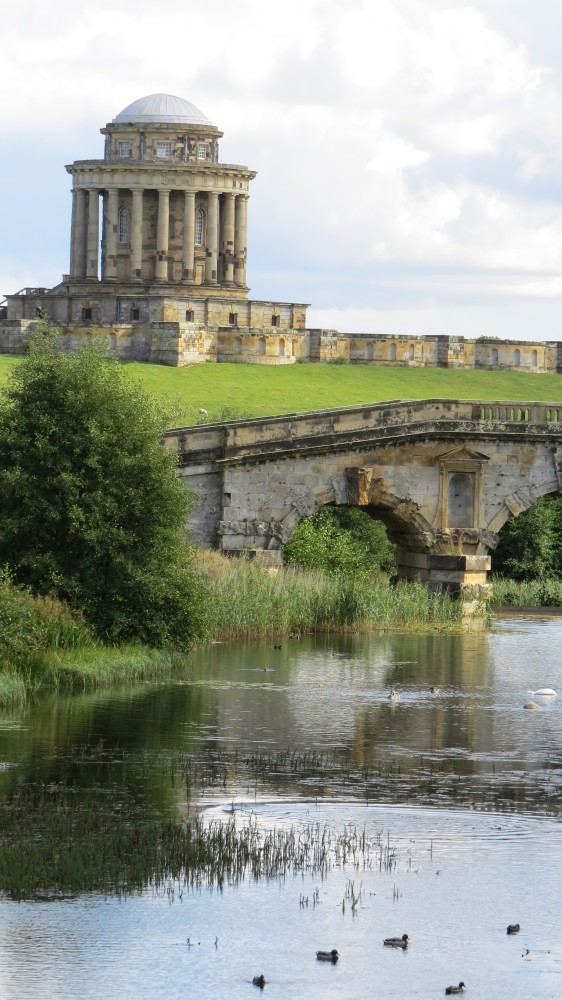 The Mausoleum and New River Bridge

At the far end of the tree-lined Terrace lies the beautifully-situated Temple of the Four Winds with panoramic views over the countryside. Designed by Vanbrugh it was completed after his death by his assistant Hawksmoor. Later developments such as Hawksmoor’s pyramid, the spectacular Mausoleum and New River Bridge were built out of the garden and into the landscape, a great innovation. 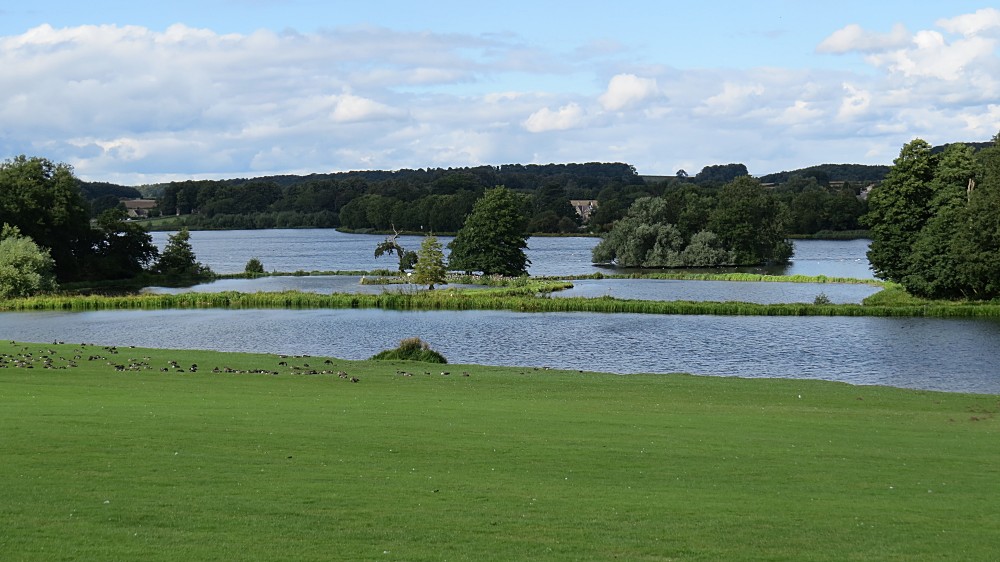 This was Carlisle’s greatest achievement, that he incorporated the entire landscape of the Howardian Hills into his garden whilst others were taking timid and tentative steps towards this goal. But to my mind the parts nearest the house (the rectangular South Lake, the South Parterre and the Temple Terrace) although attractive in themselves don’t make a coherent whole. Nevertheless that transition from garden into landscape is breath-taking. . 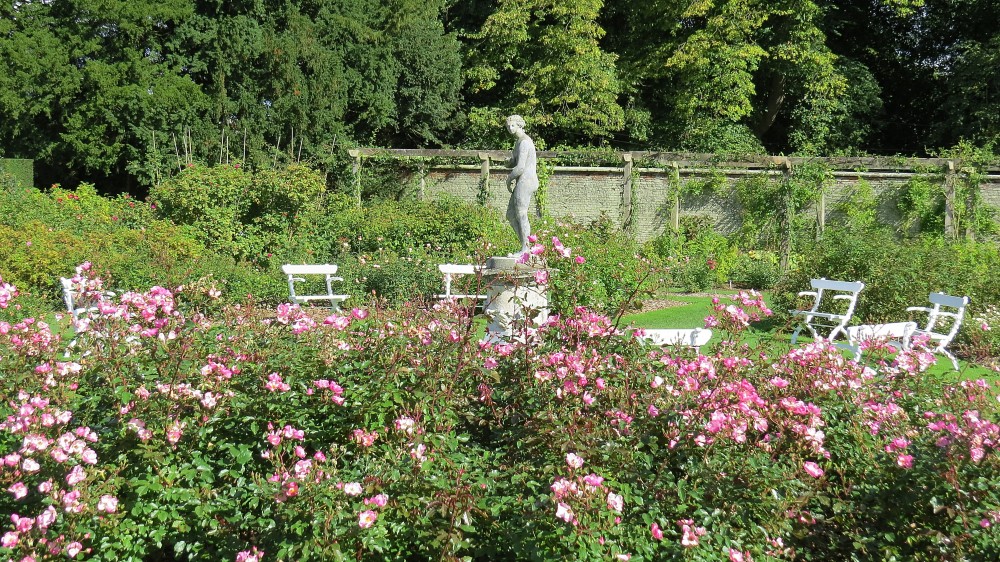 Carlisle’s great concept was hugely influential in the early 18th century, and although altered by successive generations, such as by the addition of the Great Lake to the north front of the house, and the 20th century Walled Rose Garden, the bones are still there to be seen. This is a garden landscape I happily revisit whenever I am in Yorkshire, and although it suffered a series of disasters in the 1940s it has survived and flourished. It is an amazing tribute to the energy, determination and inspired custodianship of the Howard family.