Villa Lante is one of the best-known Italian gardens, famed for its iconic ‘water-chain’ cascade, and the identical small stylish Palladian palazzine that sit to either side of the main axis of the garden. Of all the gardens around Rome this was the one I most wanted to see, a great garden by the famous 17th century architect Vignola; and yet there was much cause for irritation – why don’t the Italians make more of their great gardens? 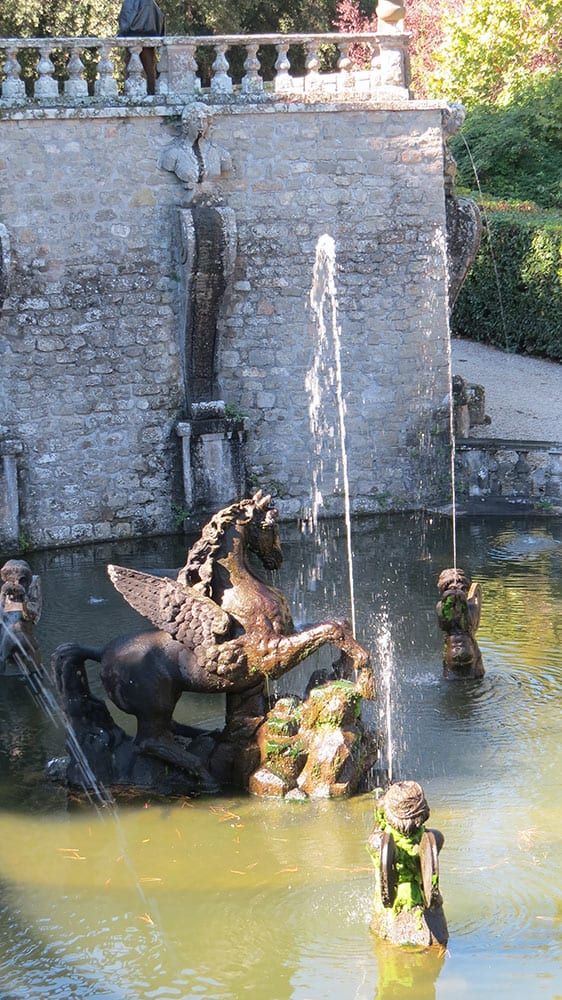 The approach is through the small town of Bagnaia, with something of a struggle to find on-street parking. The ticket office is manned by an employee of The Italian State, a bureaucratic custodian who speaks no English, rather than a helpful salesperson, has no guide books (even in Italian), and points us to the refreshments (a solitary vending machine), and the path up to the garden. For such a fabulous place, why are there no clambering army of volunteers, guide books in six languages and a rolling programme of renovation and repairs, as there would be in Britain, at a garden only half as good. But, this is Italy, and I have to accept they do things very differently… 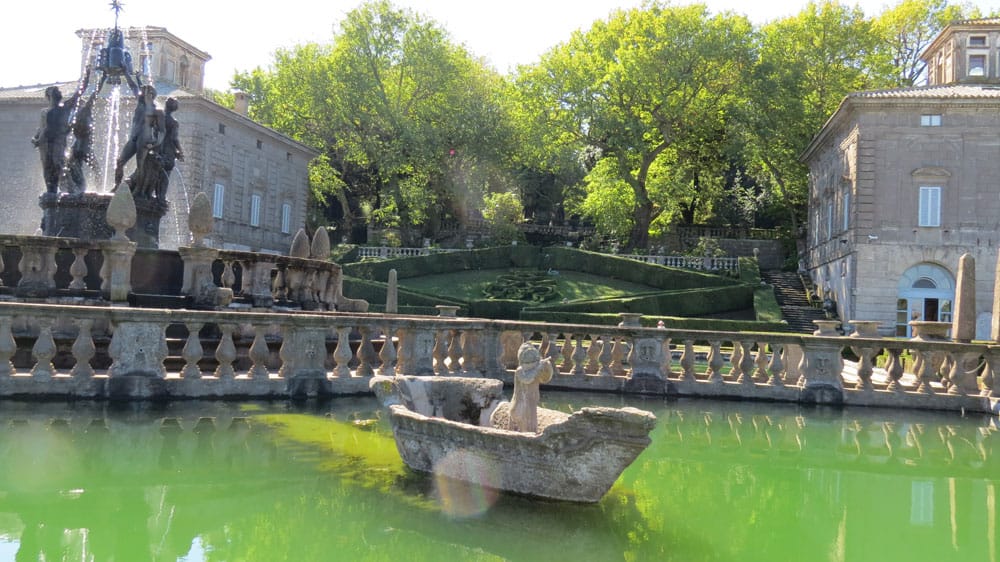 The Palazzine and the Statue of the Moors

The approach to the garden was originally from the adjoining parkland (a wild untamed place to hunt), entering the garden from the top. In a series of descending terraces, that fall 16 metres to a grand parterre, an allegorical sequence representing the triumph of man over Nature; was expressed in terms of the Renaissance ideals of reason, order, and harmony. The intention was also to impress the visitor with the sophistication of its owner, Cardinal Gambara. Gambara was related to the powerful Farnese family, and a friend of Cardinal d’Este, and the great gardens around Rome were about competition, establishing a pecking order, and displays of wealth and power; and where Villa Lante sets itself apart is in the brilliance of its design, and its skilful geometry and execution. Unlike many of the others, it is not grand or showy but satisfying; it suits the human scale. A 21st century visitor, with a hazy knowledge of classical mythology, approaching this beautiful garden is seeing it in reverse order, but I don’t think that matters. 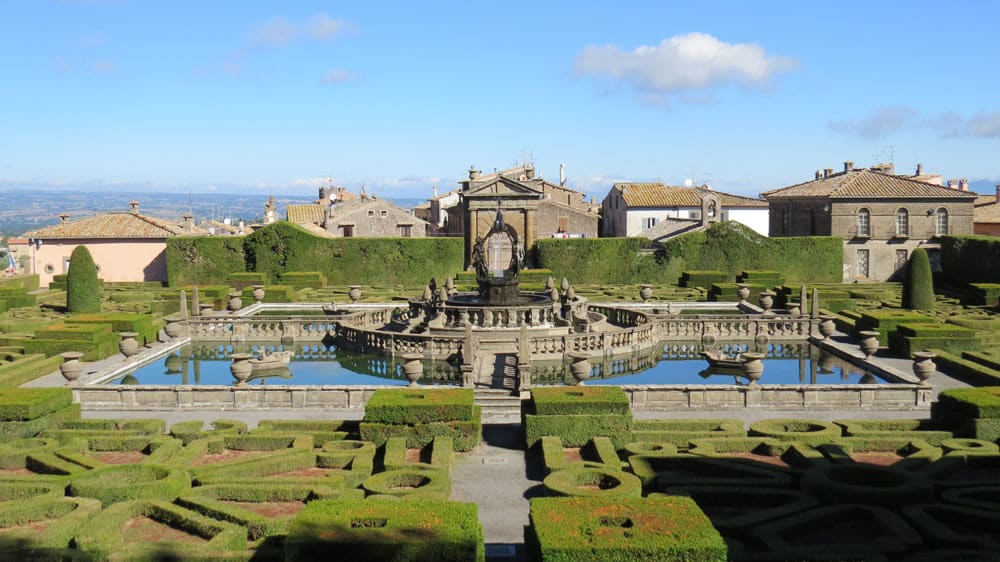 Unlike to many great gardens, Gambara’s successors added to and modified the concept without destroying it. As a summer palace of the cardinals of Viterbo, upon Cambara’s death it passed to Cardinal Montalto, who built the second counter-balancing palazzine on the dominant axis to the garden; and the first feature on the modern visitor’s ascent, the Pegasus Fountain. He also added the Statue of the Moors, the centrepiece to the ponds and fountains of the parterre. From the mid-17th century, the garden was owned by the Lante family, and the large square parterre was replanted as an ornate French parterre de broderie. To my mind, it is more fussy and complicated than the original layout, and sits uncomfortably in its space, but at least the underlying concept is unchanged. 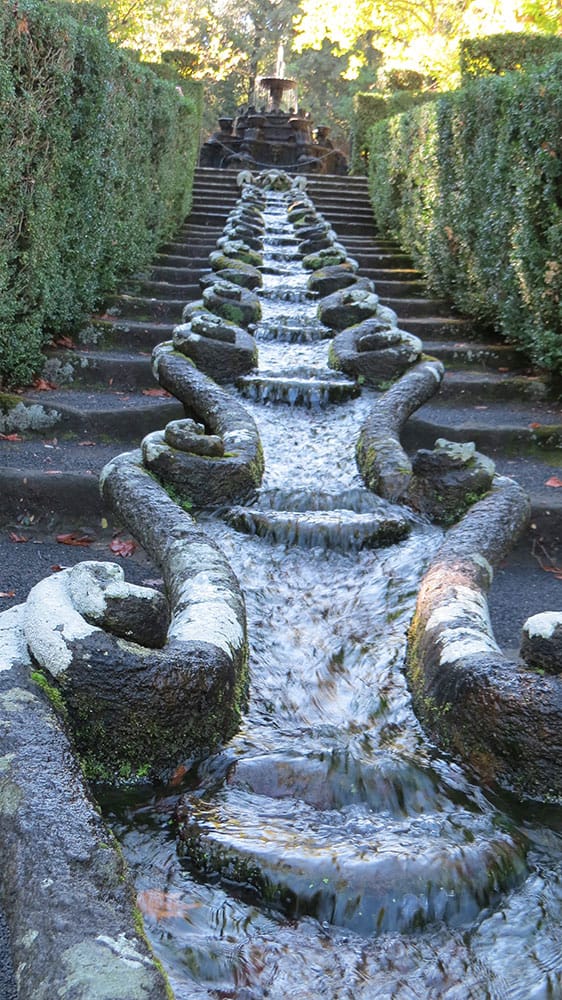 Water was, and still is the feature that brings Villa Lante to life, but in a clever and discreet way, rather than as the overwhelming display of power and opulence at neighbouring Villa d’Este. Although not all the fountains are working today, enough remain to make this an exciting journey of discovery up through the three main levels of the garden. Villa Lante’s water-chain cascade is not unique dating from an era of copycat one-upmanship, but it is believed to be the first, and is certainly the best. 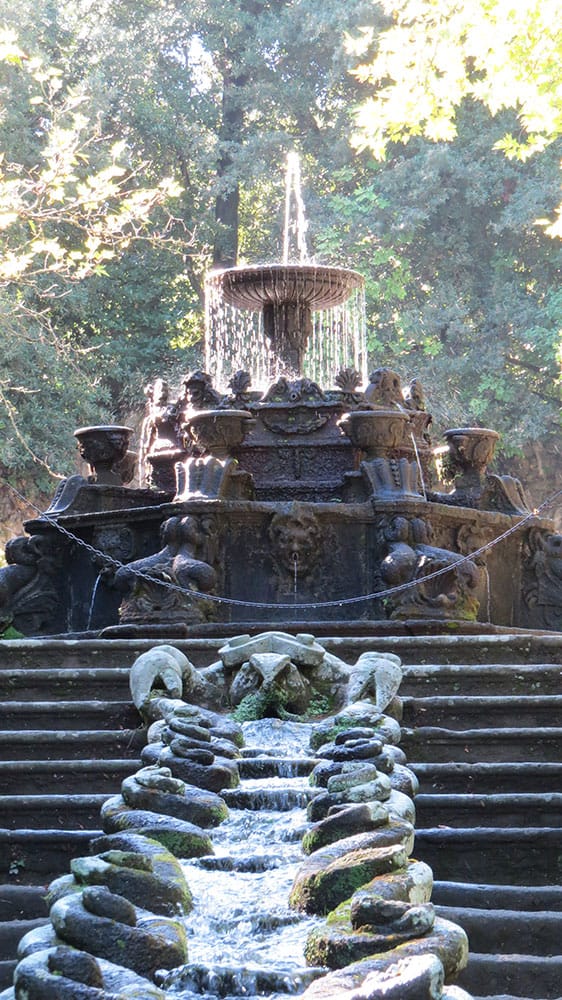 The Water Chain and The Fountain of the Dolphins

The other successful and original design feature of the garden is the water table, where food and drink were kept cool in a rill that runs the full length of the impressive eighteen metre long stone table. The cardinal’s guests would have sat at other tables in the woodland clearing, and food would have been brought to them by servants; but as a centrepiece to a banquet, the water table is spectacular without seeming opulent. 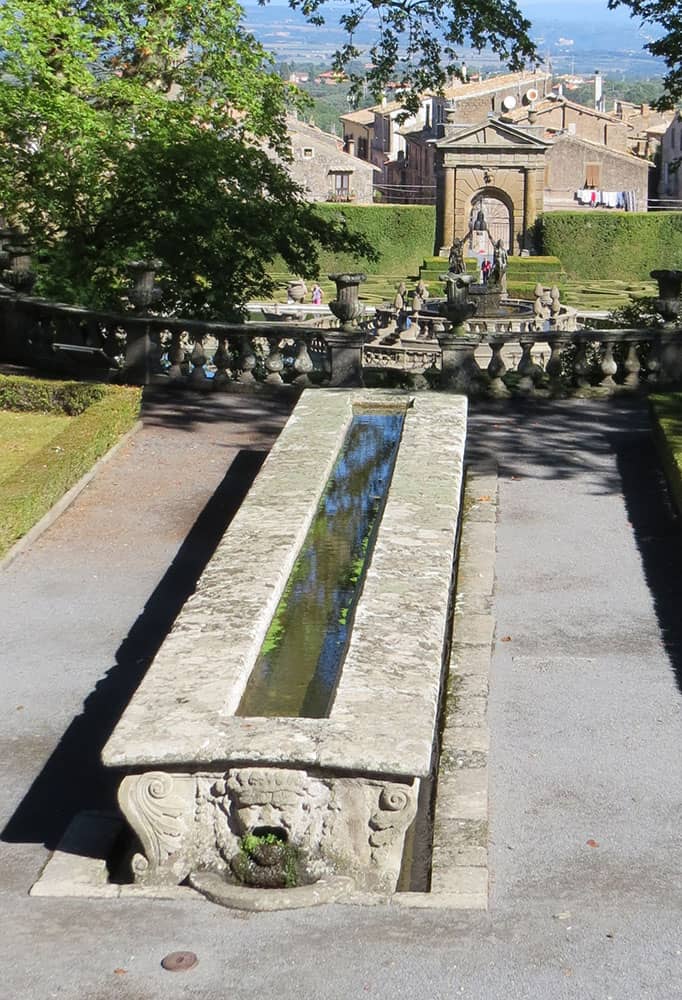 Much of the stonework to the fountains is blackened with 450 years of use, and would benefit from restoration and cleaning, but together with the inactive fountains, it seems part of the prevailing approach; to let things gently decay. The moss growing on the statues and the algae and ferns establishing themselves on the walls certainly add to the romantic, slightly forlorn atmosphere of the garden. 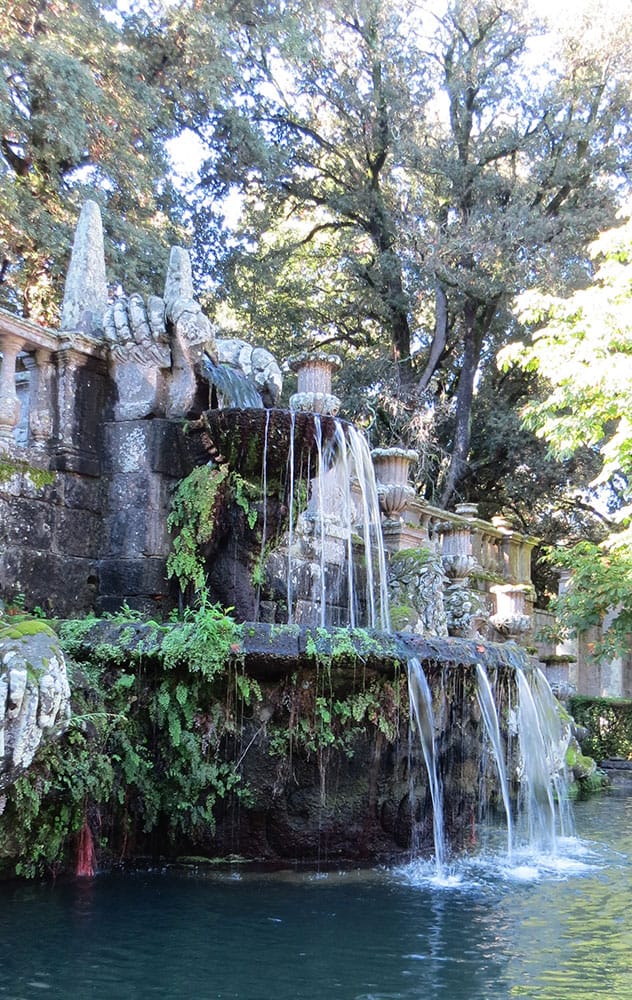 The Fountain of the River Gods

Unlike the hugely popular and neighbouring Villa d’Este (also owned by the Italian State), Villa Lante is an undervalued and under-visited garden. I want more people to come, see it and appreciate it, than the twenty or so on my visit. A garden not to be missed, despite its minor Italian irritations.