For some years, I lived in the delightfully quaint hill town of Rye, with its mix of black-tarred timber warehouses, steep cobbled streets and half-timbered cottages; an island rising out of the Romney Marshes, that mysterious landscape of big skies, sudden sea mists, and bleating sheep.

In the early years of the 20th century, Rye was a thriving intellectual and artistic community, and when I lived there, the town still had more than its share of arty eccentrics, and was proud of its cultural heritage. A suggested visit to neighbouring Bexhill-on-Sea was usually met with an incredulous why? 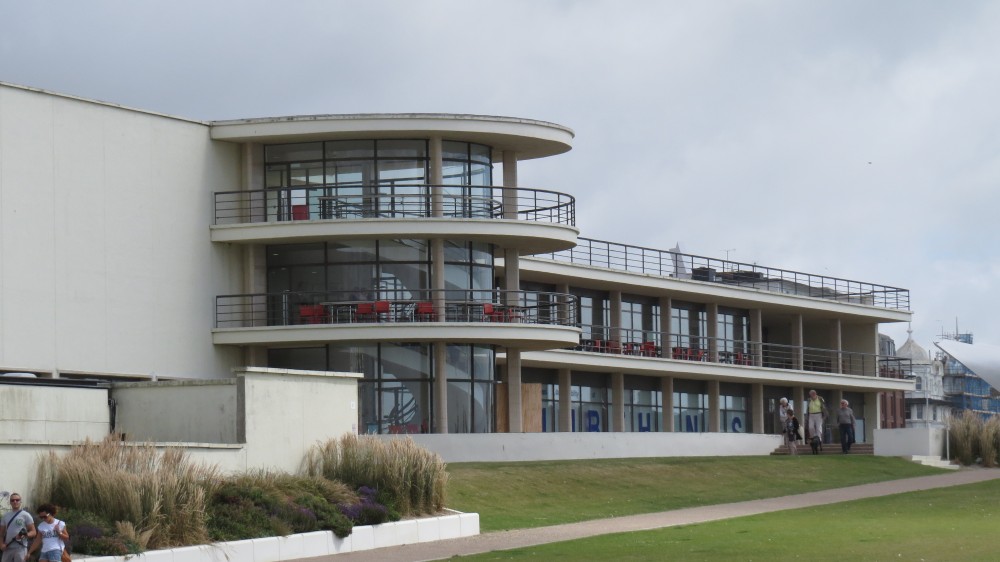 Bexhill was late off the starting blocks as a seaside resort, and although it has some interesting Edwardian buildings, it was the residential boom of the 1920s and 30s that saw the town develop into a pleasant but non-descript retirement resort. The local landowner, the 9th Earl de la Warr, mayor of Bexhill, had a vision; to create a seaside ‘people’s palace’, subsequently called the De la Warr Pavilion, to provide culture and entertainment for the masses, and help stimulate the local economy. Not for Bexhill the dodgems, crazy golf, candy floss, seaside rock, kiss-me-quick hats, and vulgar amusement arcades of neighbouring Hastings, but something more socialist, more elevating. 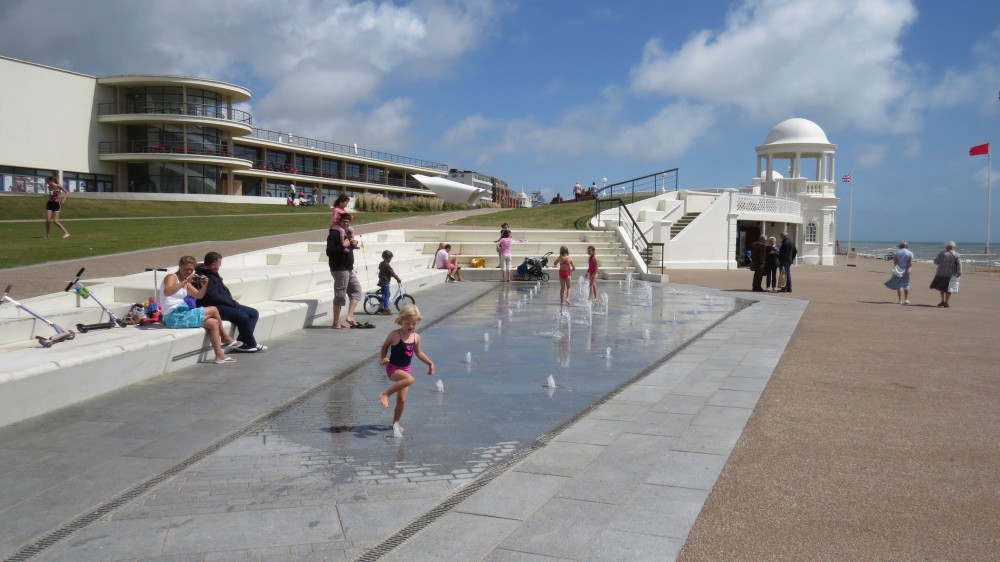 In 1935, following an architectural competition, Erich Mendelsohn, and Serge Chermayeff were chosen to build a concrete and steel Modernist building of white stuccoed walls punctuated by large steel windows, and with wrap around cantilevered balconies and a roof terrace like the deck of an ocean liner.

Considered to be one of the finest 1930s buildings in the country, its moment of glory was brief, and it subsequently suffered a chequered history. When I lived in Rye it was a sad shadow of its former self, abandoned because it didn’t meet Health and Safety requirements, with ugly 1960s alterations, and deteriorating badly under the corrosive effects of the salt spray. 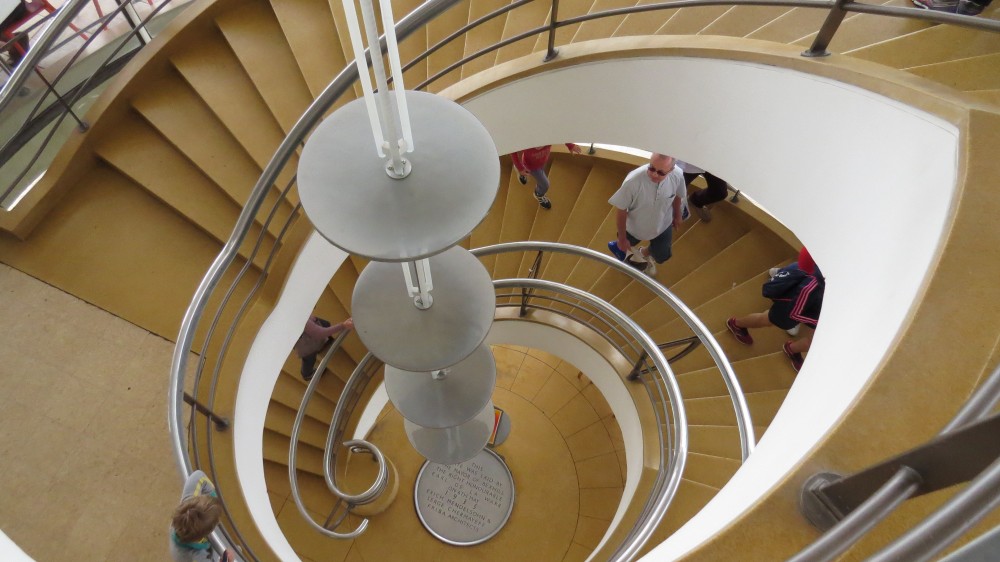 A renewal of interest in the architecture of the 1930s and its Grade 1 listing by English Heritage led to a trust being set up and Heritage Lottery and Arts Council funding being granted for its restoration and refurbishment, completed in 2005, and it is somewhere I have been keen to first ever since. The Pavilion is now used as a theatre, and centre for contemporary arts. 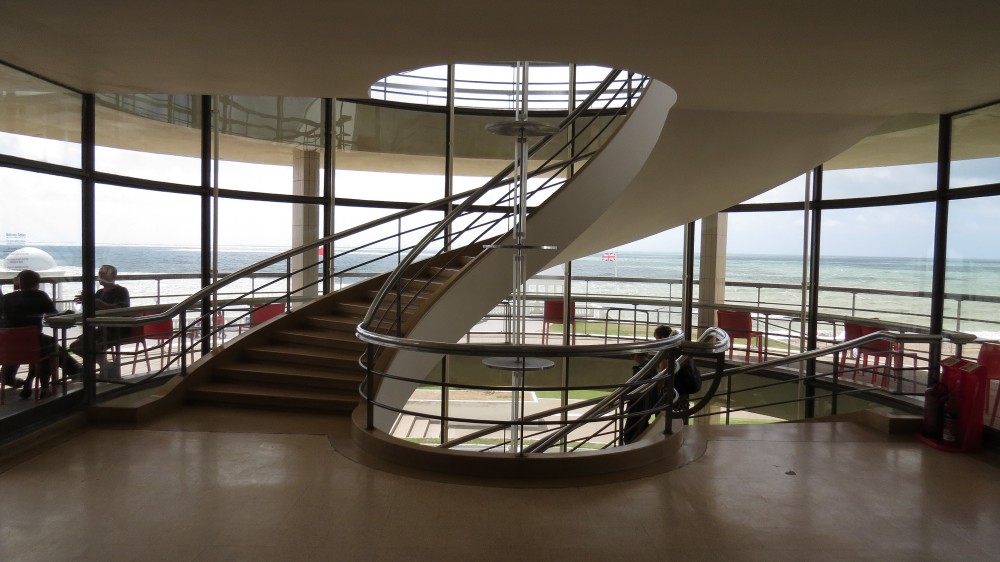 The building holds many surprises. The iconic glass stair tower, like many features of buildings of the Modern Movement is best seen as an exciting space to move through, rather than something to be viewed from a static viewpoint; whilst the blank functionality of the other external elevations seems shockingly modern. A use still has to be found for that deserted stupendous roof deck, but the worst thing was that the building was stranded in its surroundings like a beached ocean liner. 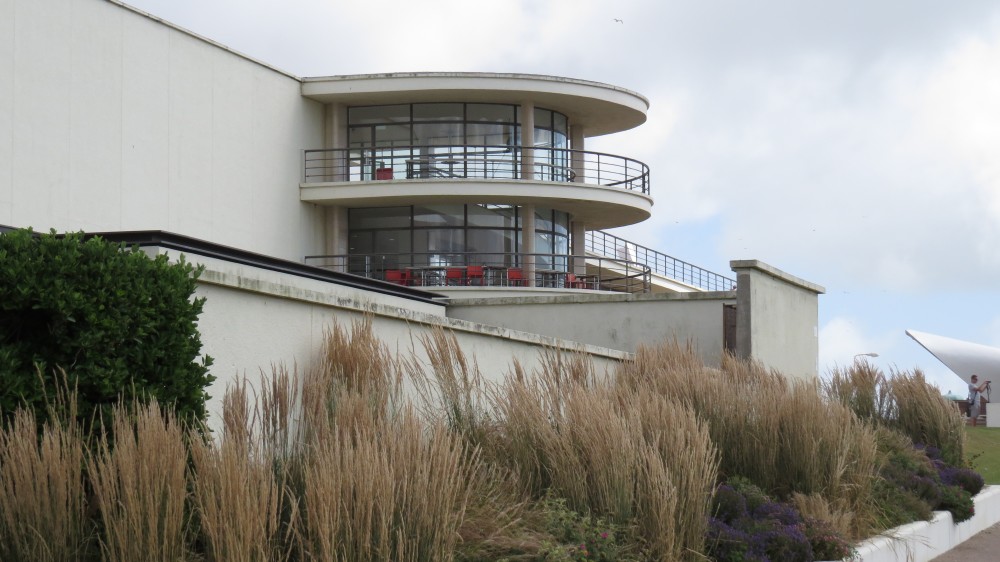 However, in 2010 urban and landscape designers HTA were appointed to rethink the wider landscape setting of the Pavilion, the adjoining West Promenade, the Colonnade and the Rowing Club. In landscaping terms the completed scheme is good because the understated spaces around the Pavilion ground the building in the landscape, and are complemented by high quality paving and lighting.

The predominant planting of grasses works well, and is reminiscent of seaside sand dunes. However, parts of the West Promenade are less successful. Whilst having good street and play furniture and stylish new seaside shelters, the planting is disappointingly timid. 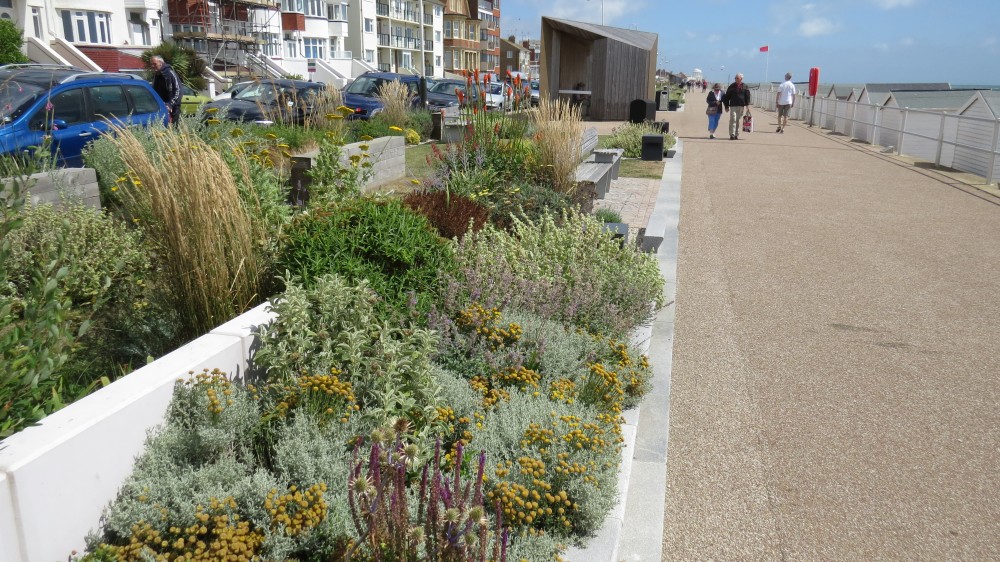 A very exposed windy site subject to salt laden spray is a challenge, and there is a limited range of plants and grasses that will thrive, and it was a brave decision to move away from showy petunias and pelargoniums in the face of local opposition.

On one side of the wide West Promenade is the majestic sweep of the horizon and unhindered views of the sea, and on the other a dead straight seafront of uninspiring seven and eight storey 1960s apartment blocks cluttered with parking bays. Here, the available space is as narrow as 1.5m, and I find garden designer Noel Kingsbury’s planting seems to ignore the scale of the setting. It is too domestic, a conciliatory half-way house to seaside summer bedding. However, further along, behind the beach huts, where the beds can be wider it works much better. This is a fairly small quibble in an otherwise excellent scheme. 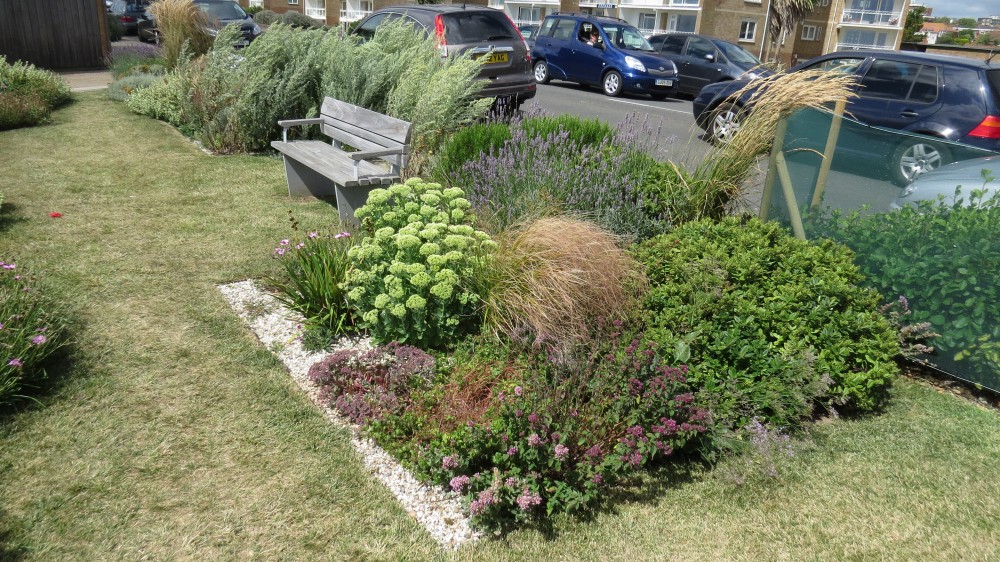 The restored De la Warr Pavilion inspired, delighted and surprised me, and its new landscape setting is a credit to the foresight of the local authority, Rother District Council, and to the imagination of the landscape architects. Bexhill is at last a destination, its seafront firmly on the map, and well worth a visit.